The High Road to Taos is a stunning scenic byway that connects Santa Fe with Taos. The well-signed route guides travelers through the pastures and meadows of the Pojoaque River Valley, the badlands of the high desert, the rolling foothills of the Sangre de Cristo Range, and the dense pine woodlands of Carson National Forest. Along the way are numerous Native American pueblos and Spanish villages steeped in history and tradition. In more recent times, a few of these villages have emerged as havens for artists, whose works are often inspired by the beauty of the region’s landscape.

The High Road journey takes several hours, especially with stopping for gallery visits, scenic photo ops, and a bite to eat, so you should plan to head out early. If you are staying in Santa Fe, take US Highway 285/84 North for 15 miles, and turn right onto State Road 503 East, just past the Cities of Gold Casino. This is where the High Road begins, in the Pojoaque River Valley, home of Nambé Pueblo. Nambé Pueblo has been in existence since the 14th Century. The ancient plaza is a registered National Historic Landmark, with its ceremonial kiva dating back to the beginning of the pueblo’s establishment. Also located on the pueblo is Nambé Falls, one of only a few natural cascades in the Southwest, which can be viewed via a short hike from the parking area. Both sites are easily accessible from Poechunu Poe/NP Road 101, with signage indicating where to turn.

After visiting the land of the Nambé, make your way back to 503 and continue east. As the roadway bends into a northward course, the pueblo communities of the Pojoaque River Valley will dissipate into the scrub-speckled sandy pink hills and wind-carved hoodoos of the badlands, with the snow-capped Sangre de Cristo Mountains to the east and the Jemez Mountains off in the western distance. This is the dramatic landscape of America’s Southwest at its best. After five miles, keep your eyes peeled for an easy-to-miss left turn onto County Road 98/Juan Medina Road, which will bring you to your next destination – the historic Santuario de Chimayó.

After two miles along Juan Medina Road, turn right onto Santuario Drive, which will bring you to the parking area and main entrance. Santuario de Chimayó is a Roman Catholic adobe-style church, famous for its annual Holy Week pilgrimage, in which some 50,000 people from all over the world gather to seek blessings, and for the legend behind its origin. As the story goes, a local friar spotted a mysterious light shining from a hillside, and after inspecting the source of this strange light, he unearthed a crucifix. On three different occasions, the crucifix was brought to neighboring villages and disappeared, only to be found again in the same spot on the hillside. It was decided that a church should be constructed on this very spot, and there you have the legend of El Santuario de Chimayó.

Upon visiting the church, make your way to the chapel on the left, which sits above a sacred posito, the source of the tierra bendita, or holy dirt. The church has become a place for healings, and stemming from the legend, the sand in which the crucifix was found is believed to have curative properties. People have been known to eat the sand or dissolve it in water to create a holy liniment to be smeared on afflicted and aching body parts. For a small fee, you can purchase a canister in the gift shop to take some of the tierra bendita home with you.

When you’ve finished exploring the santuario, continue heading north on CR 98/Juan Medina Road through the town of Chimayó. The Chimayó community is known for its centuries-old tradition of weaving, still practiced by the Ortega and Trujillo families, some of the original founding families of the region. Be sure to visit both families’ shops – Ortega’s is on the left directly before the State Road 76 junction, and if you make a left onto SR 76 West, Trujillo’s will be directly on your right.

To continue on the High Road, head east on SR 76. In four miles, off to the right you’ll see the green river valley community of Cordova, the first of several artist villages in the Sangre de Cristo foothills. Follow the signs and veer right onto County Road 80, which will swing you down into the valley and back up to the High Road. Cordova is known for its Santos woodcarving artisans, particularly the López family who has been carving for six generations. Several descendents operate shops out of their homes along CR 80. Also be sure to visit the Castillo Gallery to see some of Paul Castillo’s industrial wood and metal sculpture works.

Once back on SR 76, the roadway will begin a steep ascent to the top of a mesa, with far-reaching views of the Rio Grande basin. Your next destination is Truchas, an artist community that hugs the mesa rim, offering extraordinary mountain views and numerous galleries and studios to check out. When you enter the town, the High Road bears left as it continues to follow SR 76, however, most of the galleries are straight ahead along County Road 75. Here are a few you should definitely explore:

When you make your way back to SR 76, directly on the left past the bend in the roadway is the High Road MarketPlace, a co-op gallery featuring the works of over 70 artisans. With crafts, jewelry, pottery and more, it’s the perfect spot to pick up a memento or two to remind you of your adventures on the High Road. Continuing along SR 76, you’ll make your way into Carson National Forest and after about six miles, look for a sign on the left for Ojo Sarco Pottery off County Road 73. Local potters Kathy Riggs and Jake Willson sell and produce in this gallery/studio space. Their collaborative works are unique and functional, with a mixture of hand-built and thrown pieces in a variety of glazes.

Three miles up SR 76 from Ojo Sarco is the historic village of Las Trampas, with the well-preserved Spanish colonial church of San José de Gracia. Completed in 1776, the church is a National Historic Landmark and definitely worth a quick stop, even just for a minute to view this example of quintessential Spanish colonial architecture. After another six miles north of Las Trampas, SR 76 junctions with SR 75, where you’ll bear right to continue following the High Road to Taos Scenic Byway.

At this point in your journey you’ll probably be hungry, and you’re in luck because the Sugar Nymphs Bistro is up ahead on the left…just look for the building covered in vivid murals. Set inside the vintage Peñasco Theatre, co-owners Kai Harper Leah and Ki Holste serve up “city cuisine” in a “country atmosphere”. The eclectic menu features sandwiches, salads, burgers, oven-fired pizzas and more, with most of the ingredients locally sourced. Be sure to save room for a slice of their signature maple pecan pie. If the weather is warm, grab a table on the patio and take in the mountain-fresh air as you dine.

When you finish up at Sugar Nymphs, you can either continue heading east on SR 75 or backtrack by only a few miles to visit Picuris Pueblo. Nestled in what the locals refer to as “the hidden valley”, Picuris is located on the banks of the Rio Pueblo surrounded by the Sangre de Cristo Mountains. With a rich history of artistic tradition, the Picuris people are especially known for their unique pottery, made of glittery micaceous clay. Some works of pottery along with paintings and other crafts can be viewed and purchased at the Picuris Pueblo Museum, which is on Pueblo Road/Indian Service Route 201, just past the SR 76 junction on the right. The Picuris people also own the Hotel Santa Fe in Santa Fe’s Railyard District. I stayed here during my visit and highly recommend it, especially the luxurious Hacienda suites.

Make your way back to SR 75 East, which after passing again through Peñasco, bends to the left at the edge of town. In a few miles you’ll pass through Vadito, another sleepy river valley community. Two miles past Vadito, SR 75 junctions with SR 518, where you’ll make a left and head north toward Taos. You’ll follow SR 518 for the next 22 miles over the ridges and through the valleys of Carson National Forest until finally, the High Road comes to an end at the SR 68 junction, only a few miles south of the historic Taos Plaza.

When in Taos, there is a lot to see and do and eat and explore, so plan accordingly. Here are some recommendations:

If you’re heading back to Santa Fe, be sure to take the Low Road, which is a bit more direct but just as scenic as the High Road. The roadway cuts through steep canyons and valleys carved out by the Rio Grande, which make for some pretty dramatic vistas. 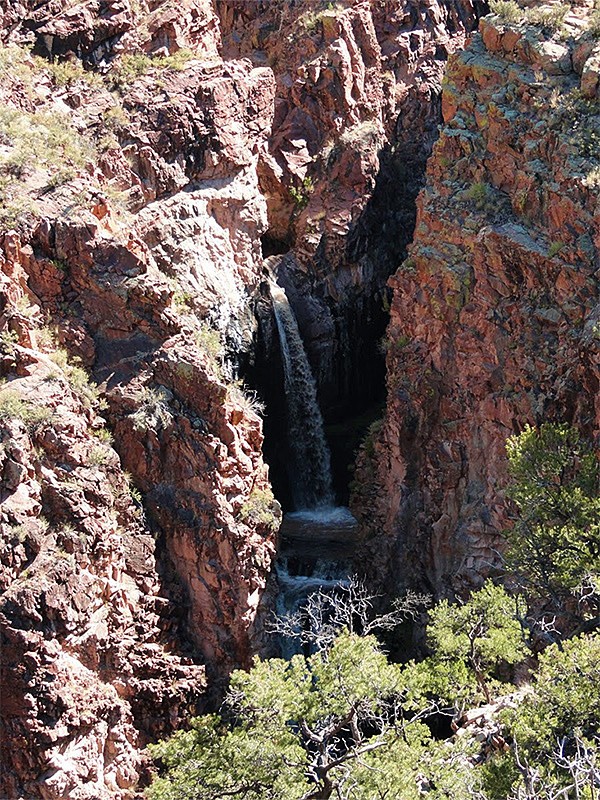 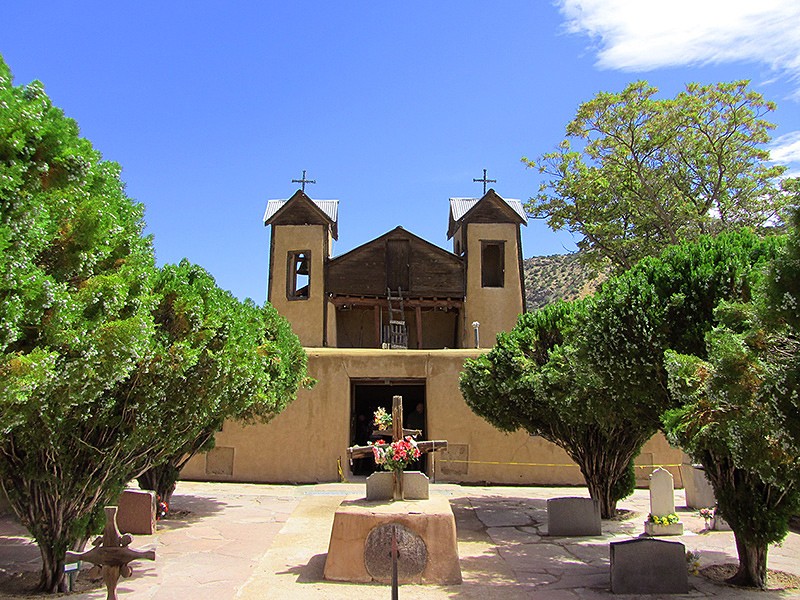 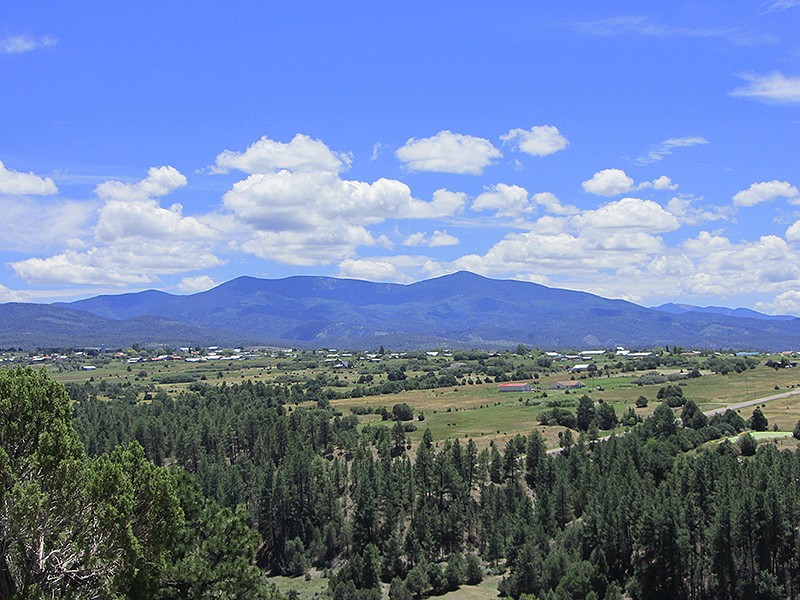 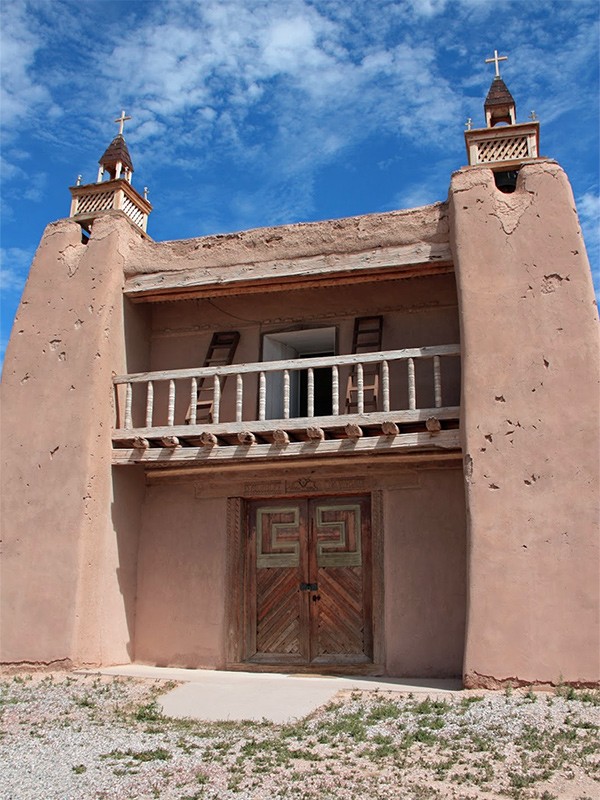 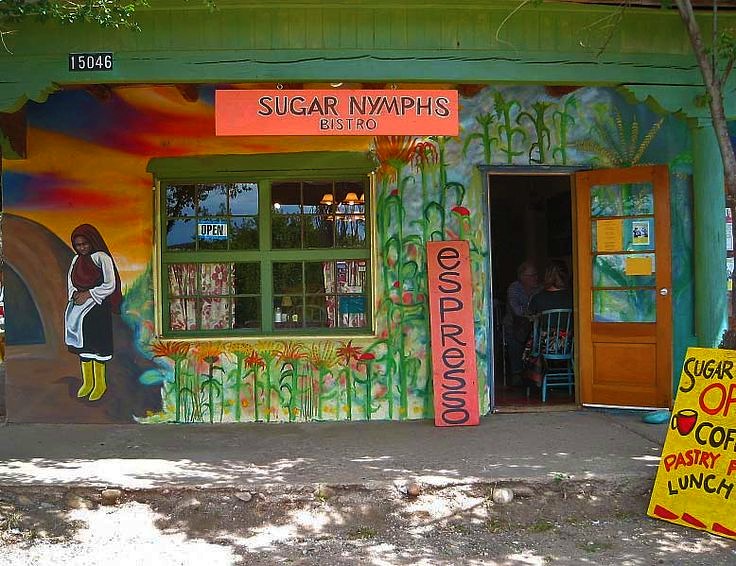 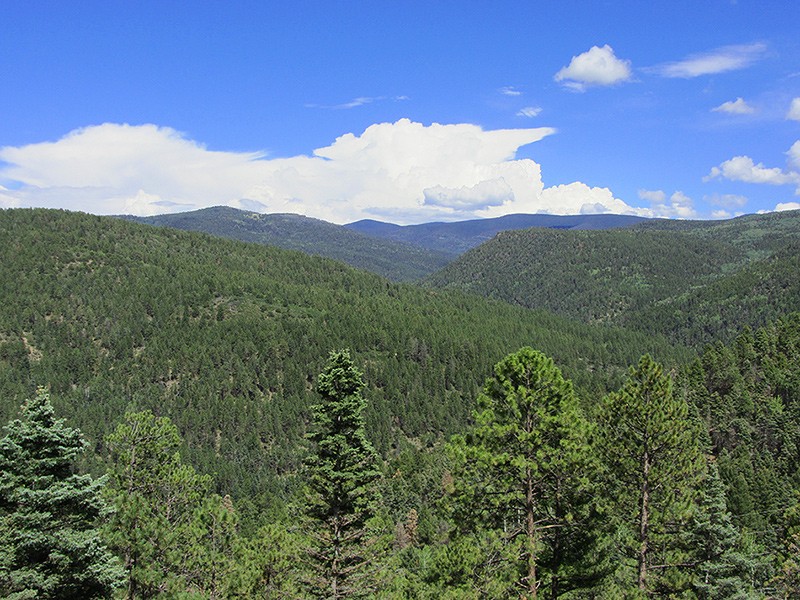 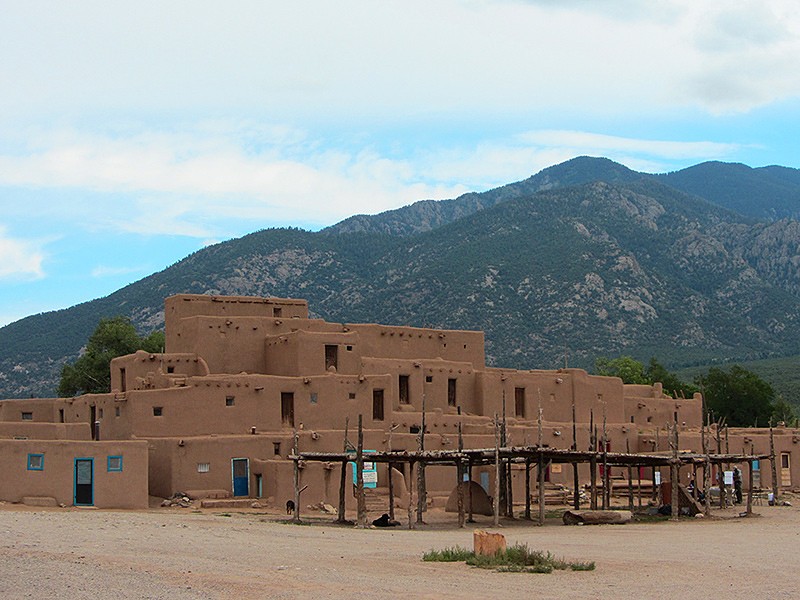 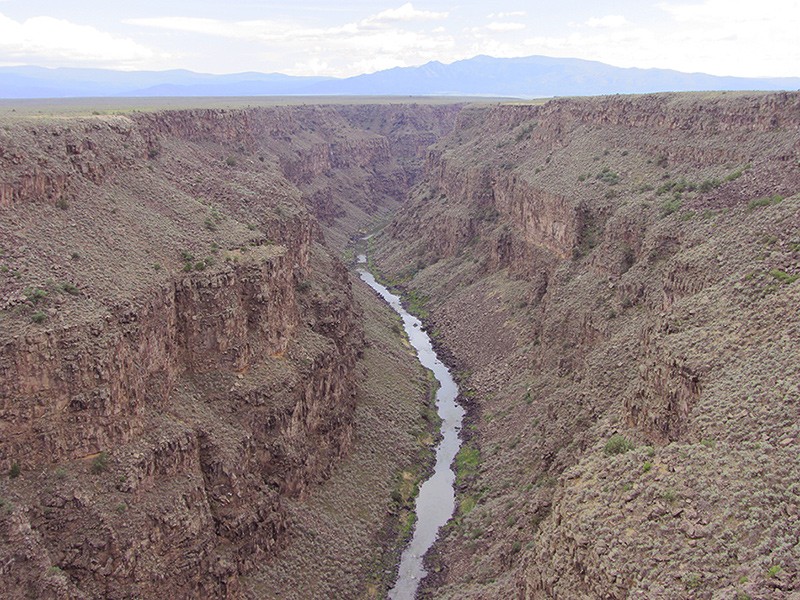 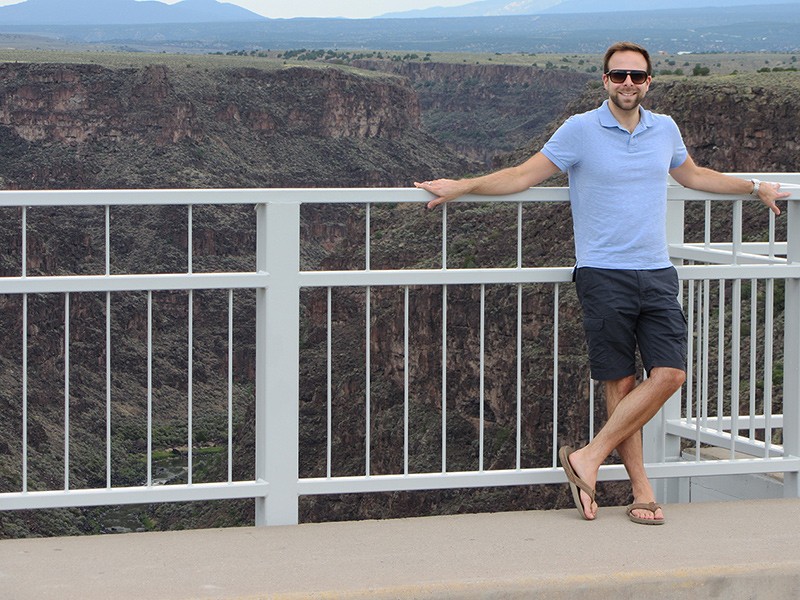