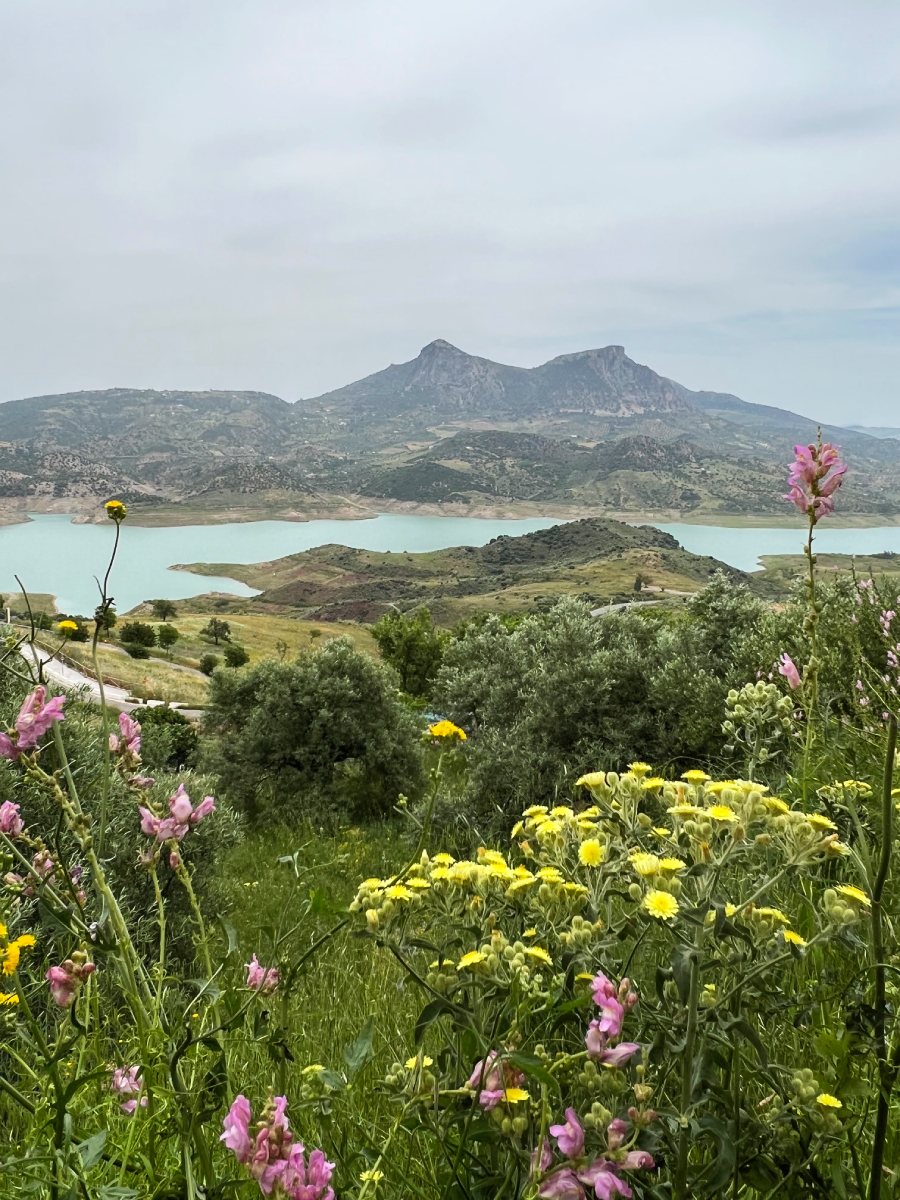 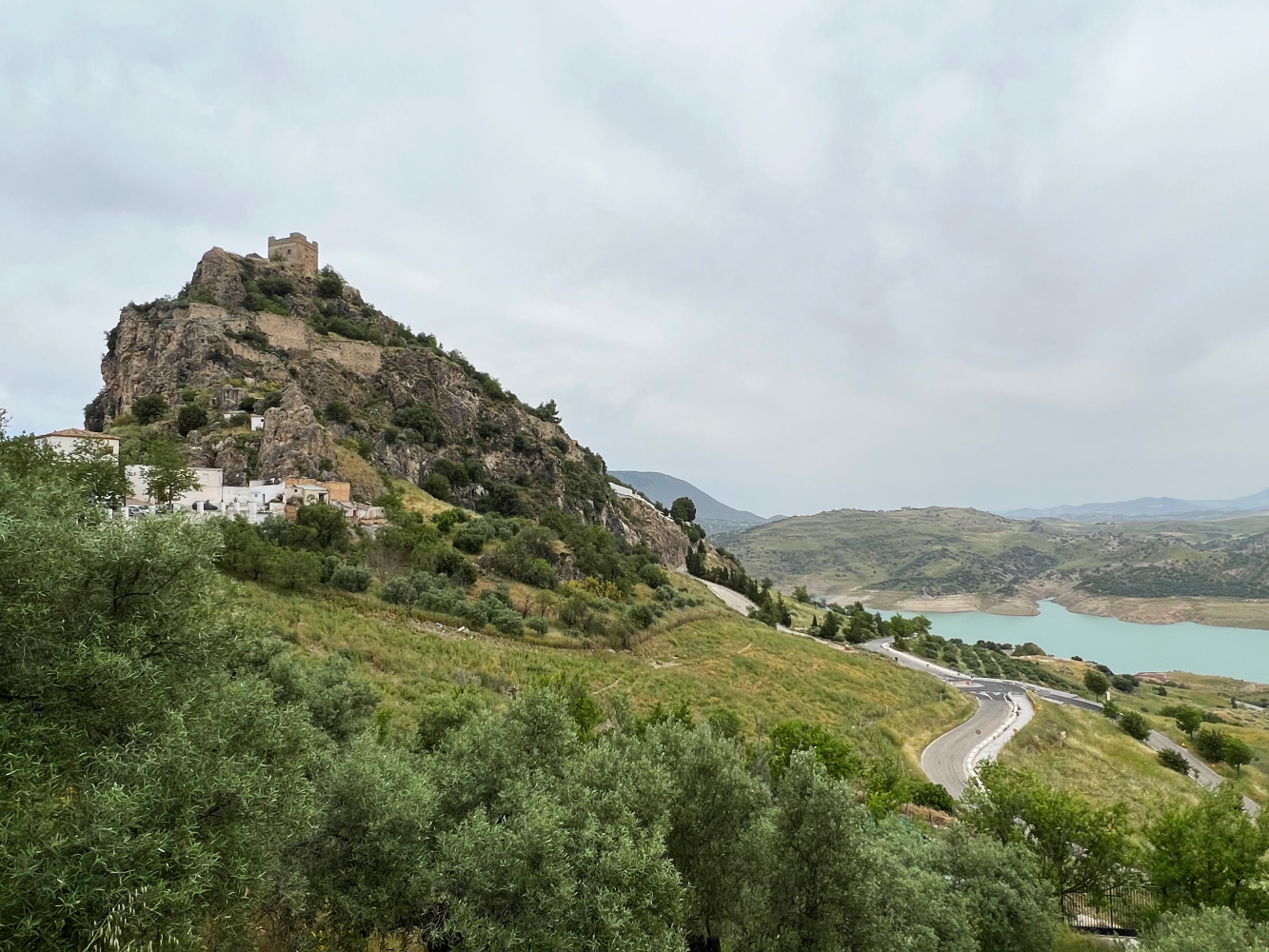 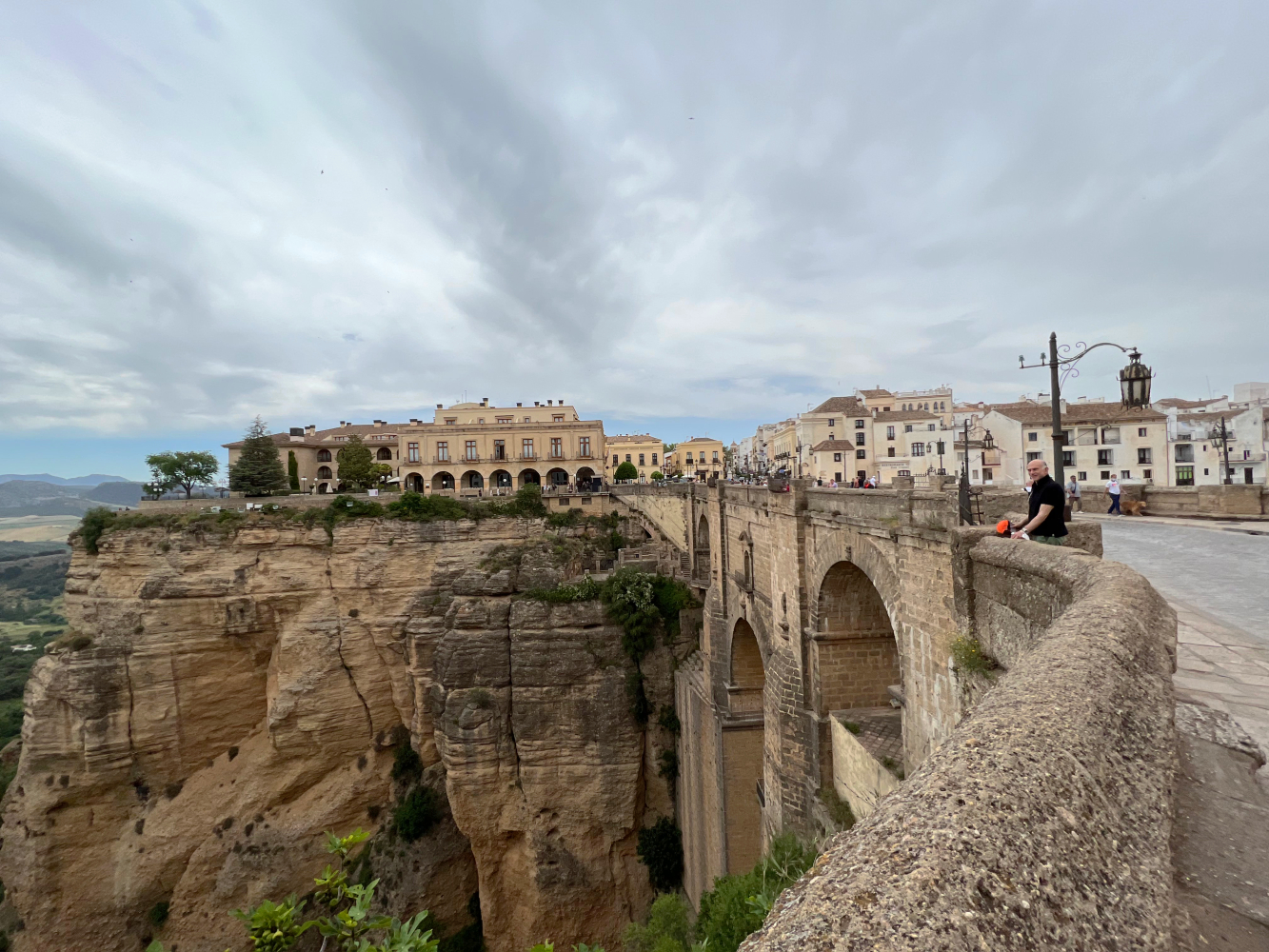 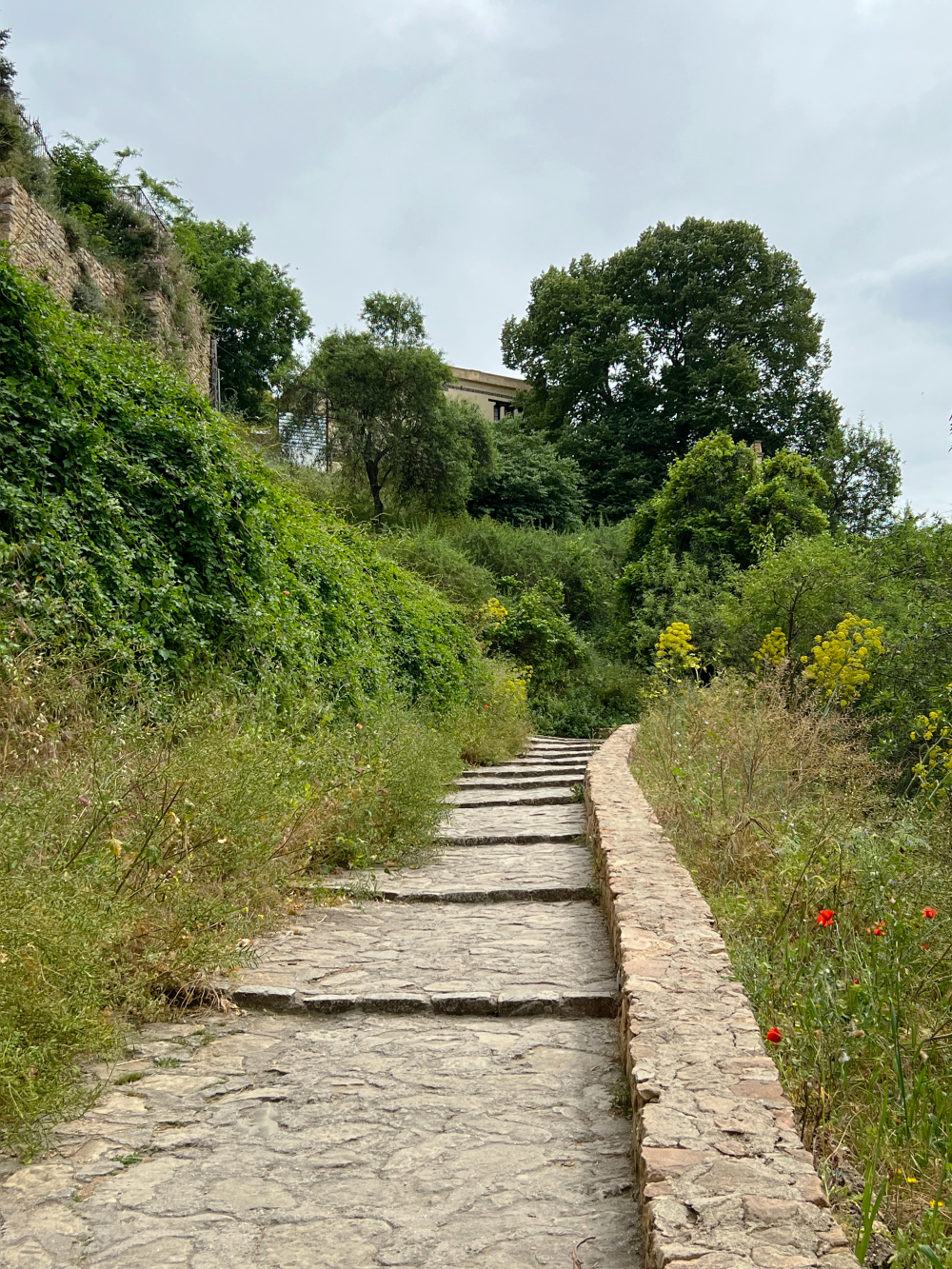 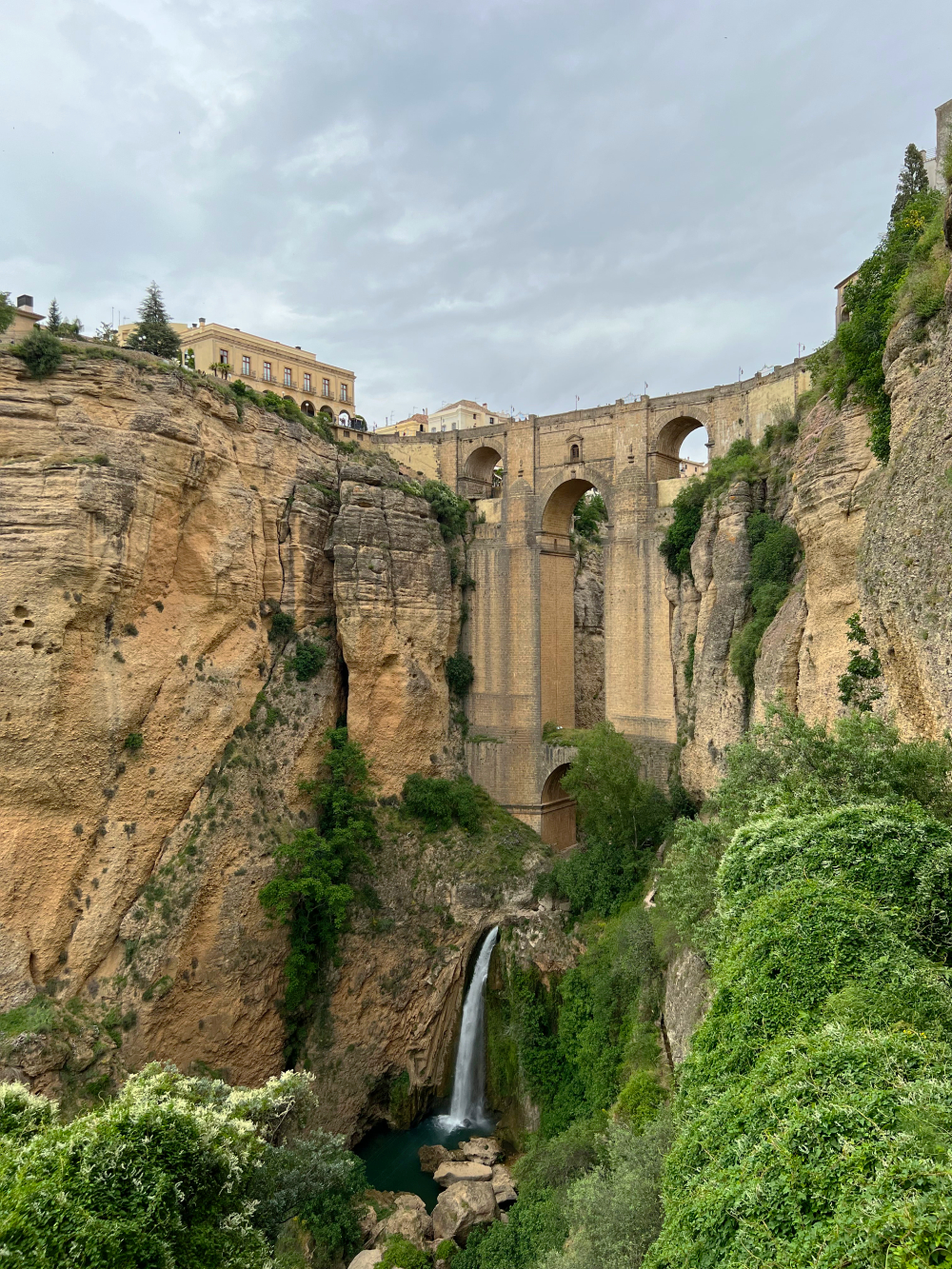 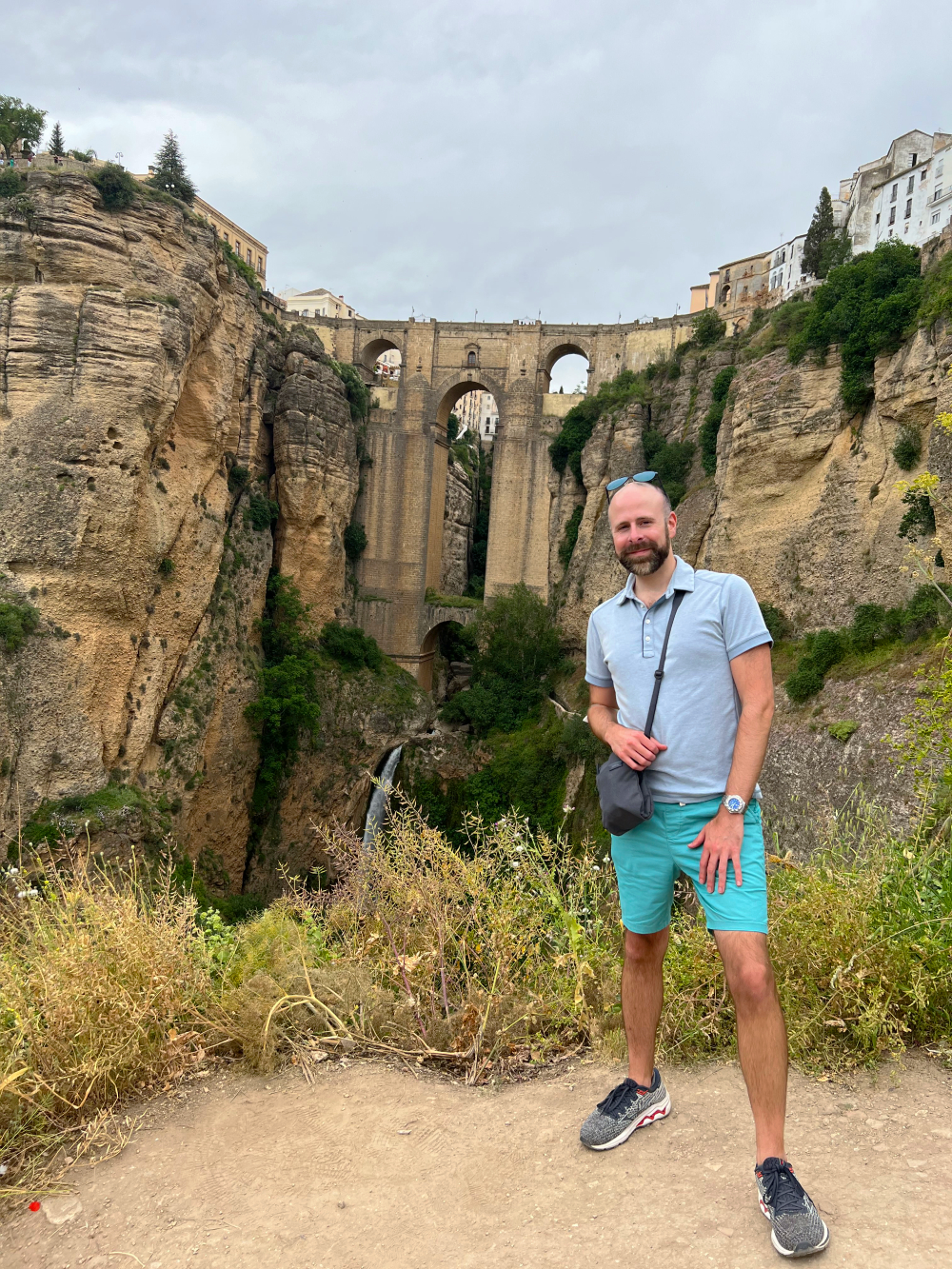 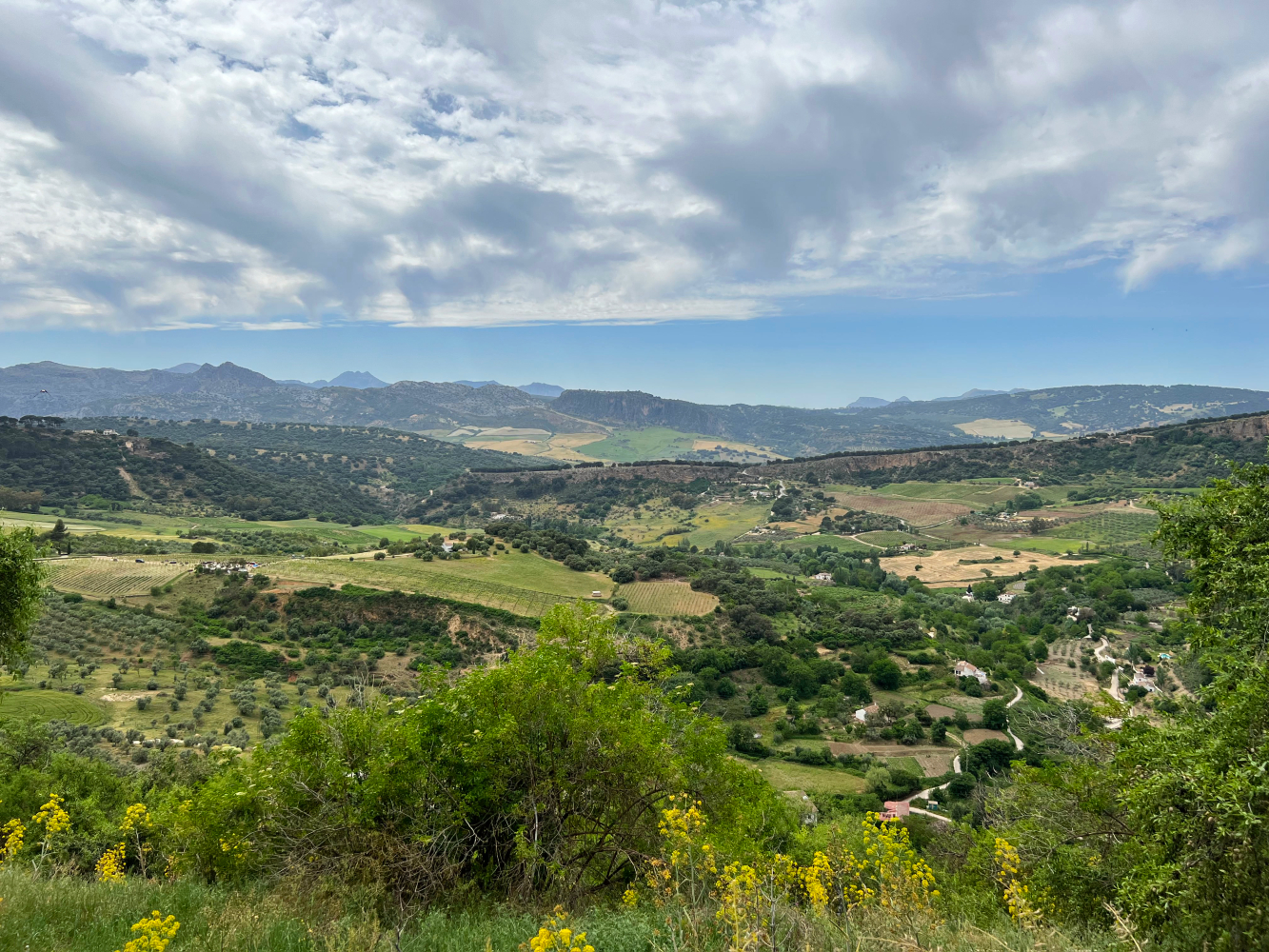 Another highlight from my May 2022 trip to Spain was seeing the Puente Nuevo in Ronda. This stunning pile of engineering spans the tajo de Ronda, a 400-foot-deep chasm carved out by the Guadalevín river, which separates Ronda’s casco antiguo, known locally as La Ciudad, from the newer part of town. I hiked down (and back up) the Camino del Albacar to a mirador located on a rocky crag with jaw-dropping views of the bridge and, to my surprise, a stunning waterfall that gushes beneath the bridge’s lowest archway.

Prior to hiking down, Charles and I had lunch in El Mercadillo (the new part of Ronda…on the north side of the Guadalevín) at Las Maravillas, a buzzy restaurant with a bright and sunny atrium in the back. We then walked across the Puente Nuevo into La Ciudad and made our way to Plaza de María Auxiliadora, the starting point of the Camino del Albacar. I left Charles on a bench in the shade and began my descent.

The Camino del Albacar scales a winding stone path that descends rather precipitously. Sweet fennel, purple morning glories, and fire engine red poppies grew wild amidst the dense green scrub lining the pathway. After several switchbacks, I reached the upper landing of the mirador and continued down a vertical, boulder-strewn track to the prime viewing promontory. To my surprise, it was quite a popular spot despite the not-so-easy trek down. There were several women who had descended in platform espadrilles – very impressive.

The promontory itself was actually quite unsafe. Loose gravel met the edge of a sheer cliff that dropped straight down to the bottom of the ravine – with no protective barrier. People were contorting themselves on the edge just to get the perfect selfie with the bridge in the background. I played it safe and asked someone to take my photo. The tableau all around me was truly spectacular. Located at the center point of the horseshoe-shaped tajo is the multi-arched Puente Nuevo, with exposed sandstone cliffs, looking weathered and prehistoric, giving way to white-washed Spanish colonial buildings dangling over the edge. The opposing view is a lush valley fed by the Guadalevín and covered in a patchwork of fields and olive groves – an Andalusian Eden.

The name Puente Nuevo is a bit of a misnomer. In the 1730s, to accommodate the town’s growing population, plans were devised to create a third crossing to link Ronda’s two sections. Construction began on a single arch design in 1735, but shortly after completion in 1741, it collapsed killing 50 people. Construction of the “new bridge” (the one standing today) began in 1759 and wasn’t completed until 1793. It features thick vertical supports attached to the canyon walls, with three arches supporting the street crossing and a fourth arch at the foot of the two main pillars.

After soaking in the scenery, I hiked back up the Camino del Albacar to Plaza de María Auxiliadora, where Charles was sitting on the same bench in the shade. We moseyed our way back to the car, passing Ronda’s famous Plaza de Toros bullring of the Royal Cavalry, frequently visited by both Ernest Hemingway and Orson Welles. Both men have their names (and faces) posthumously etched on statues and walkways throughout the city. There is plenty more to see in Ronda, but we were short on time. We had started the morning in Jerez de la Frontera and stopped in Ronda en route to Málaga. I can see coming back some day to explore the rest of the city and the surrounding Andalusian countryside.