I’ve always wanted to visit Storm King Art Center. My boyfriend, Charles, and I pass it every weekend on the way to our country house in the Catskills. From the New York State Thruway you can catch glimpses of the grounds and several sculptures, but I’m fairly certain that traveling at 75 MPH isn’t quite how the artists intended their works to be viewed nor experienced. Luckily, Storm King is easily accessible, and we took advantage of its close proximity not too long ago when some friends were visiting from London.

Storm King, which derives its name from the mountain that rises several miles to the east, was originally envisioned as a museum to exhibit works from the Hudson River School. Founder Ralph “Ted” Ogden achieved great success from his family business, Star Expansion, which manufactured steel hardware and fasteners. Through a family foundation, he purchased a 180-acre estate on which his friend, the New York Lawyer Vermont Hatch, built a Normandy-style chateau on a hill with panoramic views of the Hudson Highlands. With help and interest from his son-in-law, H. Peter Stern, together they established the Storm King Art Center in 1960, converting the chateau into a showcase for two-dimensional paintings and prints.

Over the next few years, Ogden and Stern began to rethink their plan for the art center, wanting to forge an experience for its visitors that would incorporate the undulating hills and verdant fields of the picturesque property. In 1967, Ogden visited the home of the recently deceased artist David Smith. There were 13 sculptures on display, strategically positioned in the open fields outside Smith’s home. Inspired by what he saw, Ogden purchased all 13 pieces, and so the story goes, the concept for today’s sculpture park was conceived. The museum expanded to its present day 500 acre site with a 1985 land donation from Star Expansion. Today, there are over 100 pieces in Storm King’s renowned and celebrated sculpture collection.

We arrived on a cool, cloudy afternoon in late September. It was actually the perfect weather since a lot of the pieces are located in vast, open fields, and I could imagine it getting pretty uncomfortable roaming the property in the peak of summer sun. From the south parking area, we started our adventure by making our way towards the Museum Building (the former Hatch estate). This area of the property is called Museum Hill, where numerous notable pieces are on display, many of which were early acquisitions by the museum. We were greeted by City on the High Mountain, Louise Nevelson’s 23-foot steel jumble, and sweeping views of the south fields where several Mark di Suvero I-beam creations are positioned. Situated behind the Museum Building we found Study in Arcs, one of the 13 David Smith creations in the Storm King collection.

Further up the hill, we stopped for a rest on Noguchi’s stone Momo Taro – one of the few pieces in the park that you can actually sit on. From Momo Taro, the northward view is that of perhaps my favorite piece in the sculpture park – Menashe Kadishman’s Suspended. This work will undoubtedly leave you perplexed, and you’ll probably find yourself asking, “How is that standing?” From Suspended, we walked up the very steep hill that leads to the North Woods, where 20 small-scale works are on-display in a shaded pocket of the sculpture park. A few of the pieces are interactive with nature, like George Cutts’ Sea Change, which bends and contorts with the blowing of the wind, and Jerome Kirk’s Orbit, which spirals into infinity.

The North Woods slope down to the Meadow, where several large-scale sculptures are sited. In my opinion, the most evocative piece in this location is Robert Grosvenor’s 212-foot long untitled sculpture that is intended to mirror the form of the Hudson Highlands in the horizon behind it. This piece was Grosvenor’s second commissioned work for Storm King. We then walked over to Alexander Calder’s The Arch, a curvaceous 50-foot tall colossus that serves as the welcoming committee for those entering the park from the north parking area. On our way to the last area to explore, the South Fields, we stopped to examine David von Schlegell’s untitled three floating rectangles.

The South Fields cover the southern half of the property and house numerous large-scale and site-specific works. First we encountered Magdalena Abakanowicz’s Sarcophagi in Glass Houses, in which four greenhouse cages showcase the corpses of 19th Century industrial engines. We then checked out Zhang Huan’s steel and copper Three Legged Buddha, which at 28 feet tall and weighing over 12 tons will certainly make you feel teensy.

Lining the western edge of the manicured green encircling Huan’s Buddha is one of two Andy Goldsworthy fieldstone wall installations. Aptly entitled Five Men, Seventeen Days, Fifteen Boulders, One Wall, it was constructed without any mortar yet stands sturdily against the test of time. Completed 12 years earlier, the other Goldsworthy wall installation is located a few yards away. Evoking the same design and structural reinforcement, the 2,278-foot long serpentine Storm King Wall winds its way in and out of a wooded area before disappearing into the south pond and then reappearing on the other side. You wouldn’t think to pair the word “graceful” with a stone wall, but it fits with Goldsworthy’s installations.

Next we walked over to Schunnemunk Fork, a site-specific sculpture by Richard Serra, an artist for whom Charles has a deep admiration. He was very pleased to touch and experience the four steel plates, partially buried into the slope of a hillside with Schunnemunk Mountain rising up in the distance. From Serra’s fork, we checked out Maya Lin’s very cool Storm King Wavefield. Spanning the southernmost 11-acres of the park, Lin sculpted several rows of 10 to 15-foot waves that span an average of 350 feet in length. While the waves were inspired by ocean swells, they are also reminiscent of the rolling hills that surround Storm King.

At this point we were all ready to pack it in, and so we strolled north along Bunny Road towards the parking lot. Along the way, we passed some pretty spectacular pieces – the western portion of Andy Goldsworthy’s Storm King Wall, as it emerged from the pond and climbed towards the Thruway; Roy Lichtenstein’s Mermaid, a pop art canoe on an island in the middle of a pond; and all of the Mark di Suvero sculptures that we saw from Museum Hill, like the vibrant red Jambalaya and Old Gray Beam, and Frog Legs, a colossal figure perched high on a mound and composed of scavenged industrial materials.

What an amazing day we had at Storm King. You too can walk among these masterpieces…the museum is only an hour north of Manhattan, just a short drive from Exit 16 off the Thruway. Tickets are $15 for adults; $8 for teens and students. Please be sure to note – Storm King is closed to the public from December 2 to March 31. 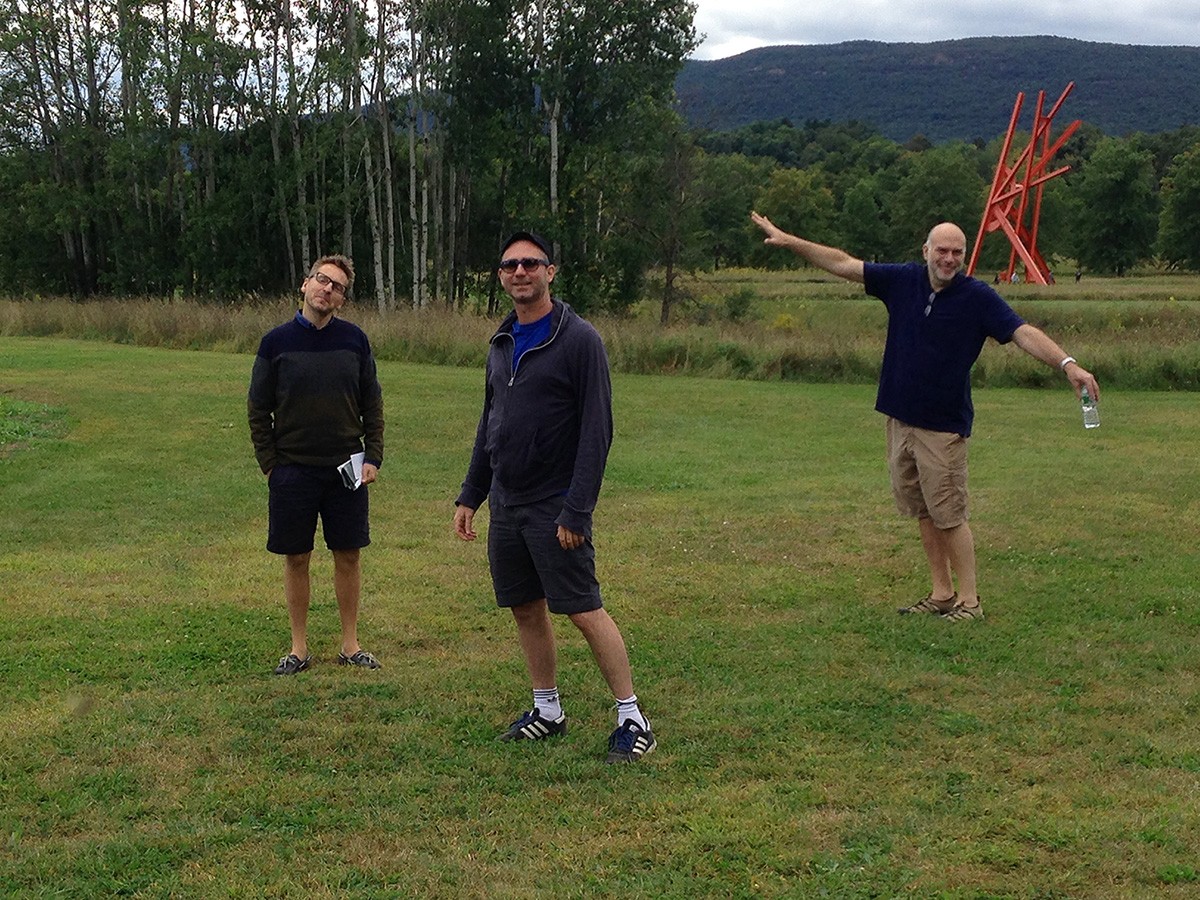 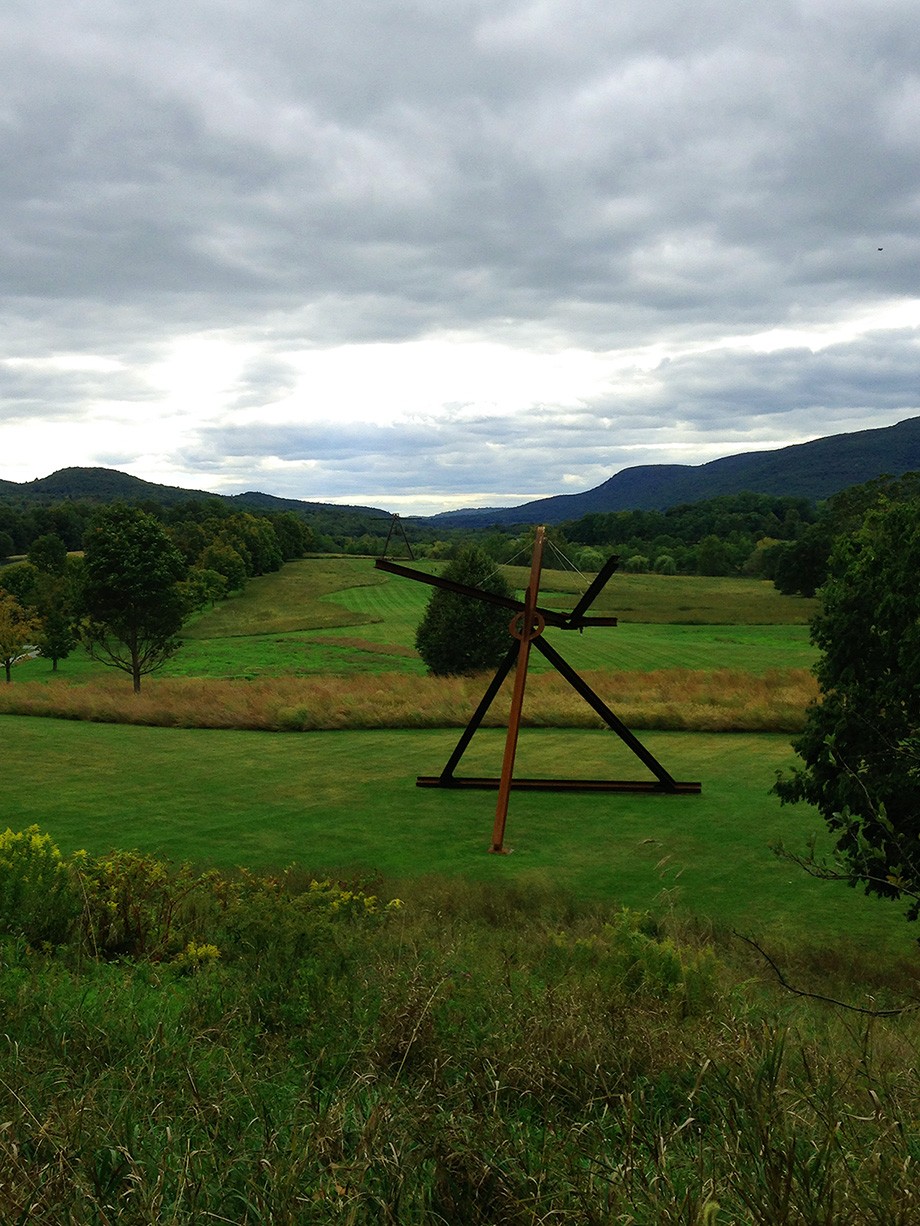 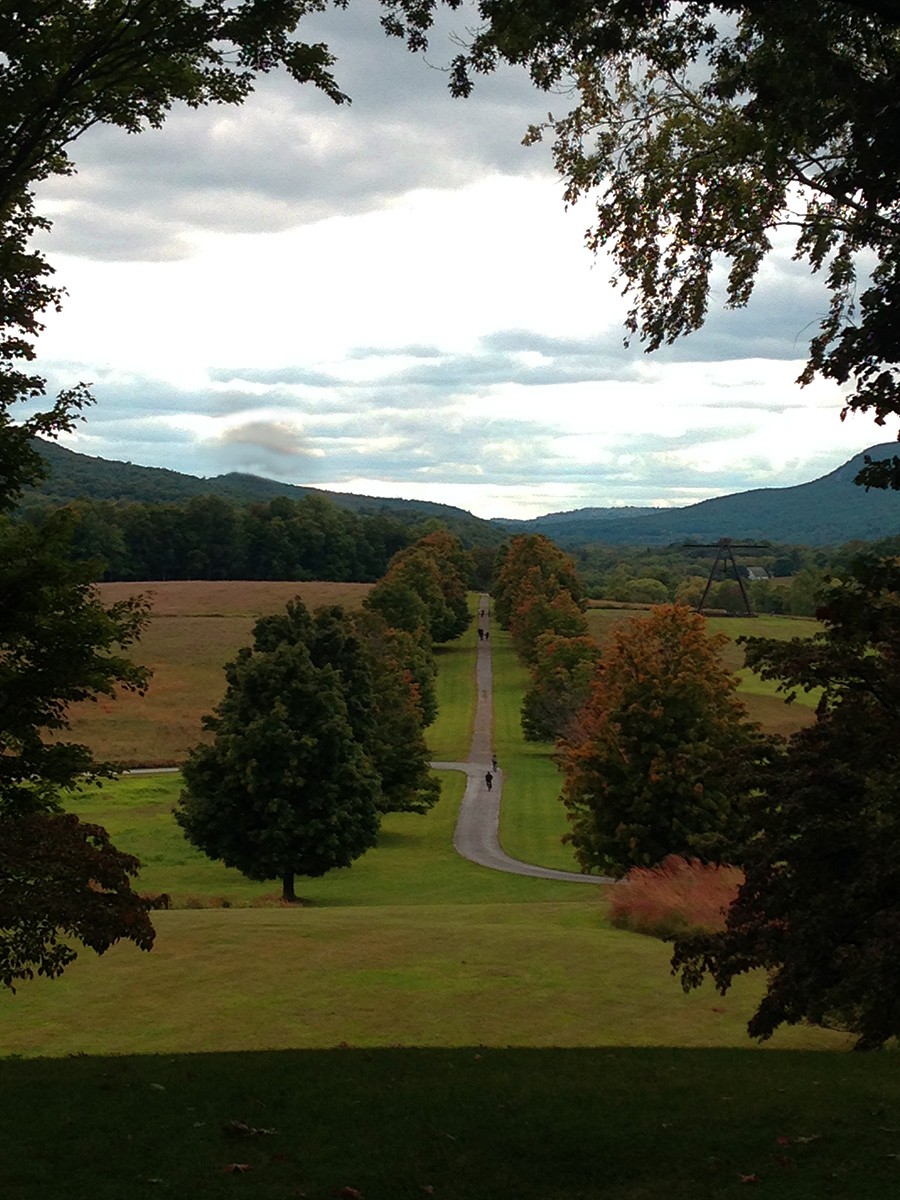 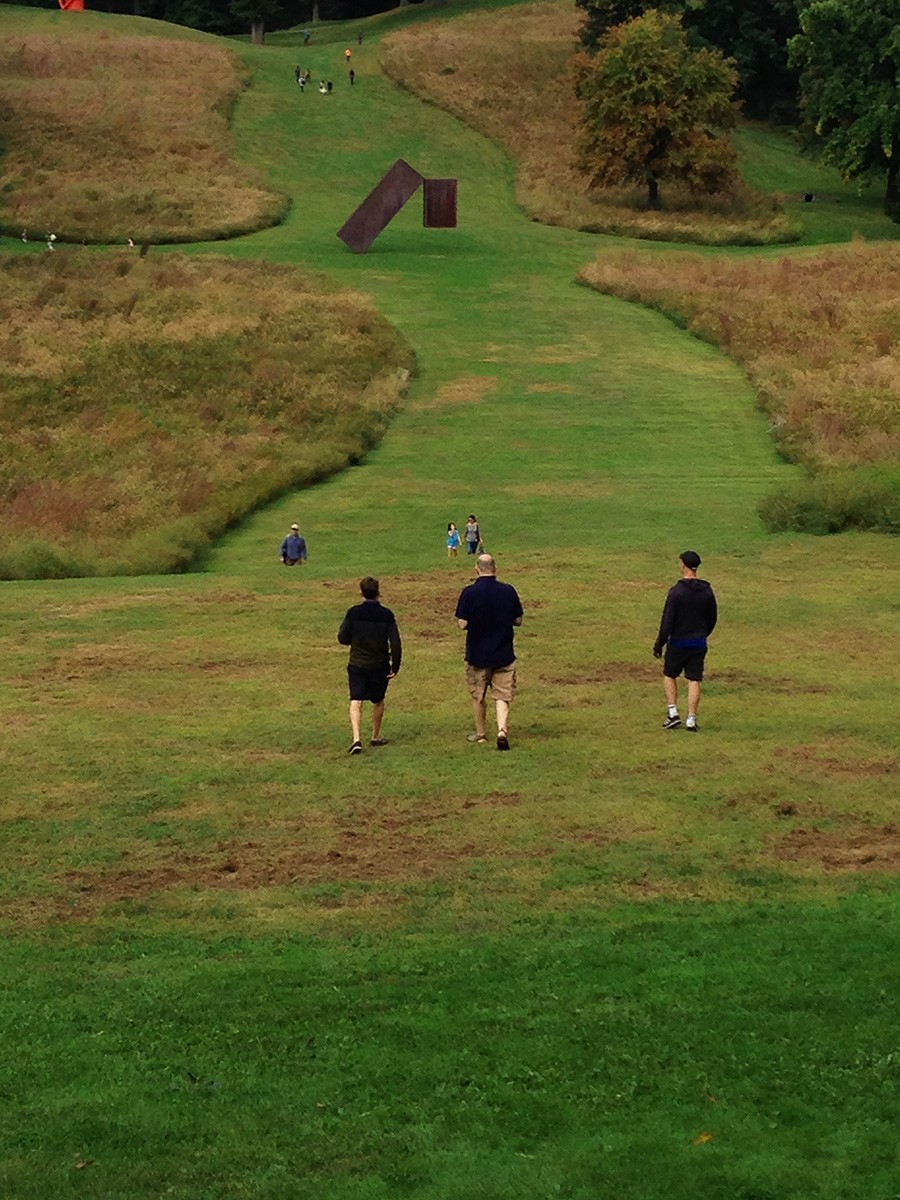 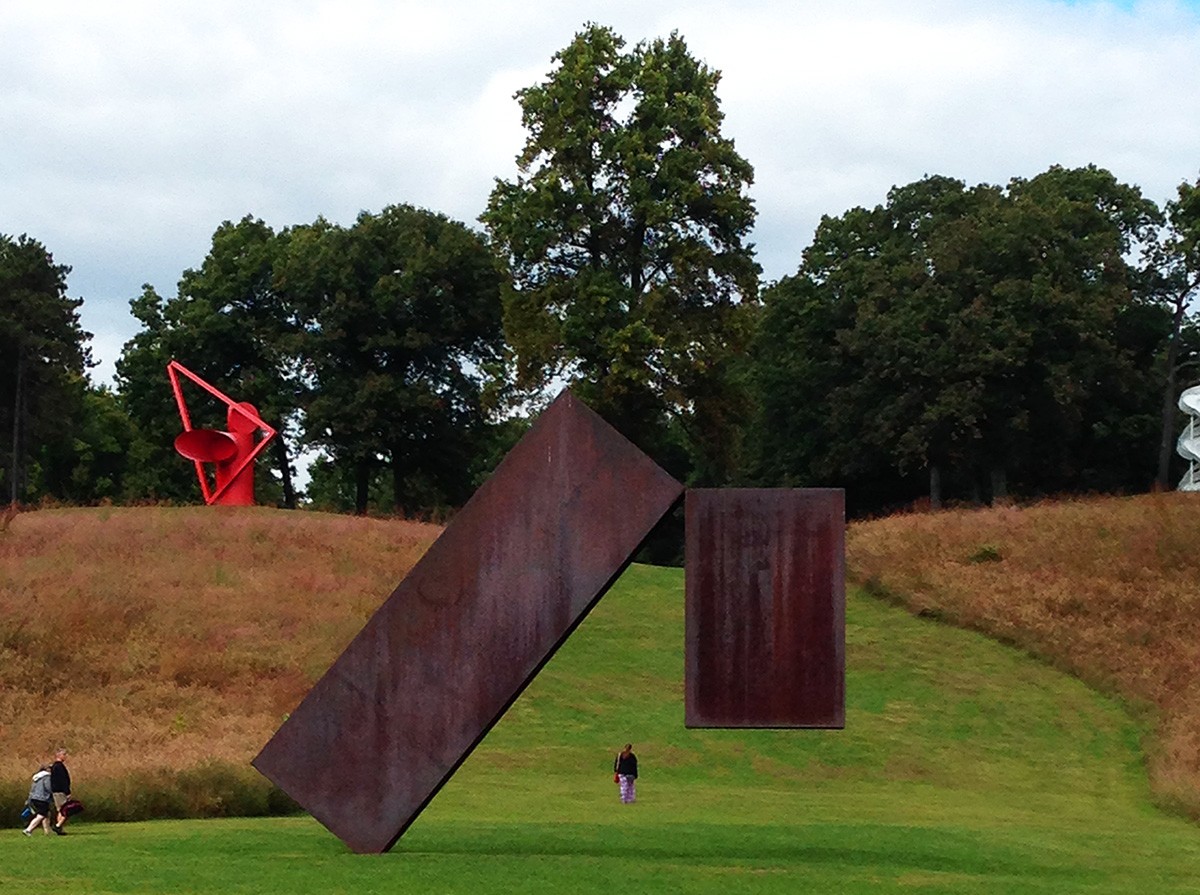 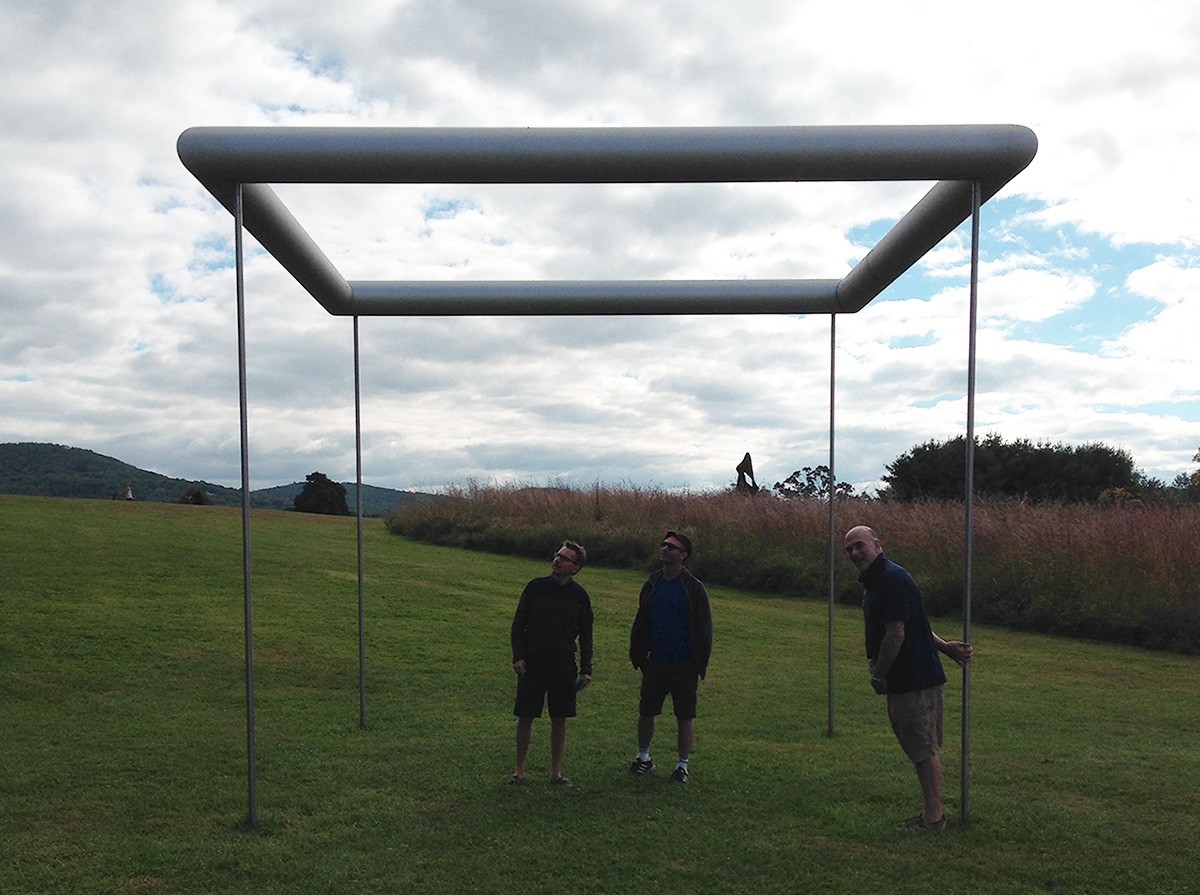 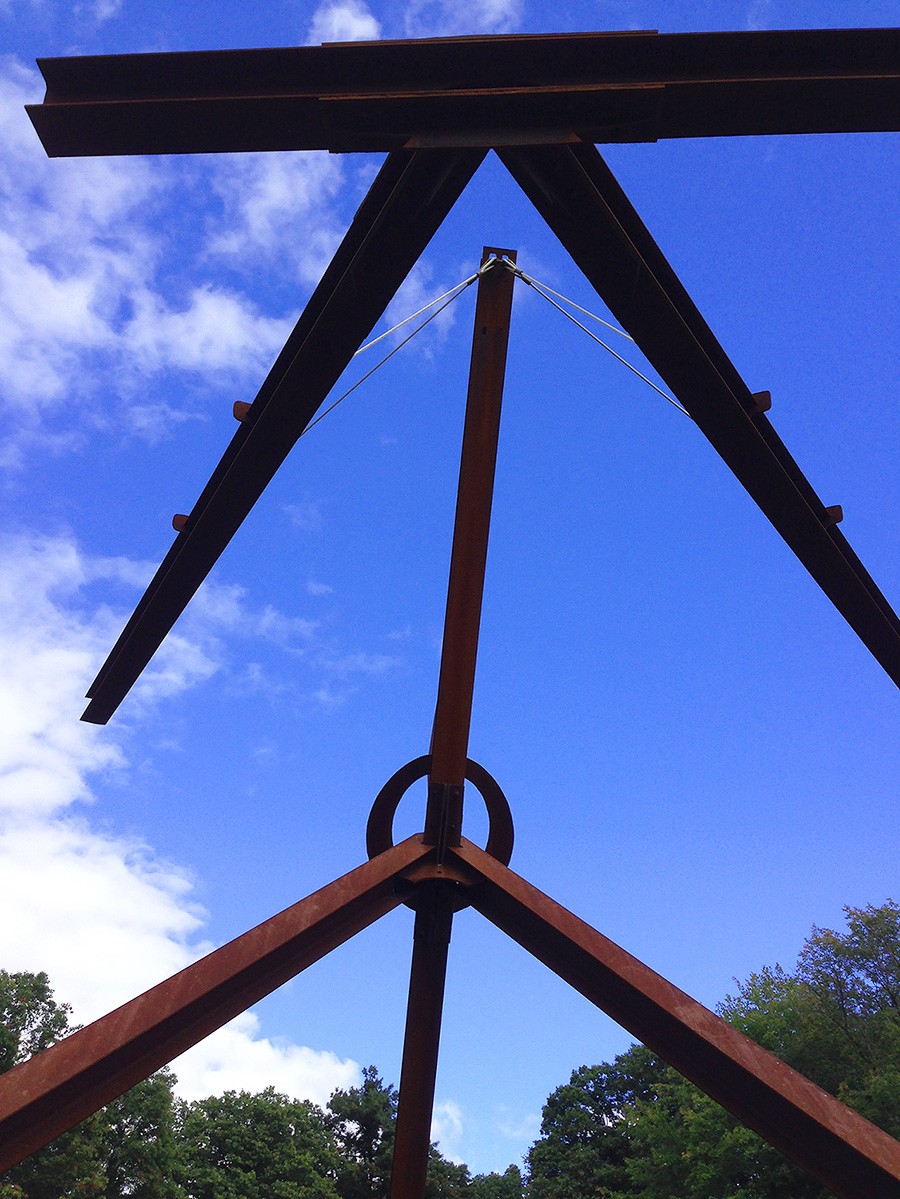 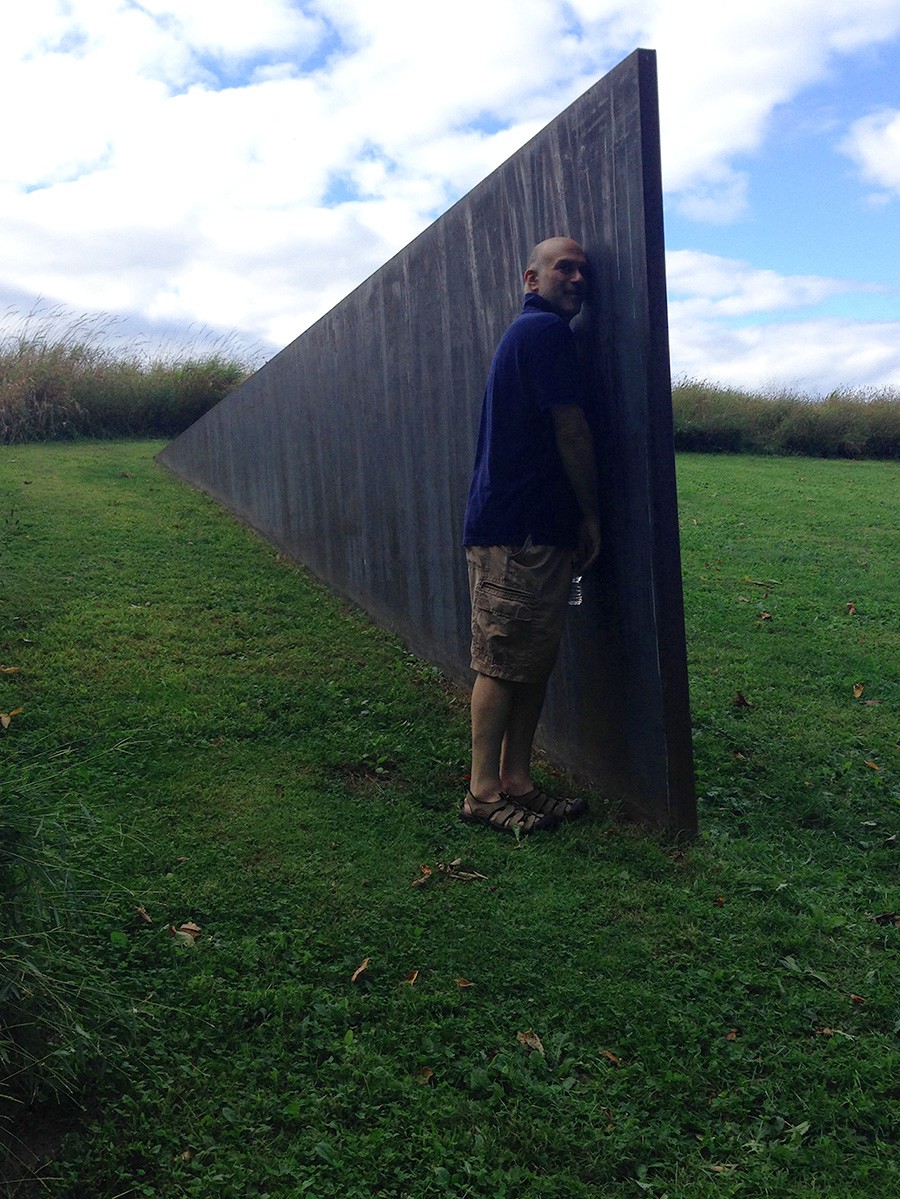 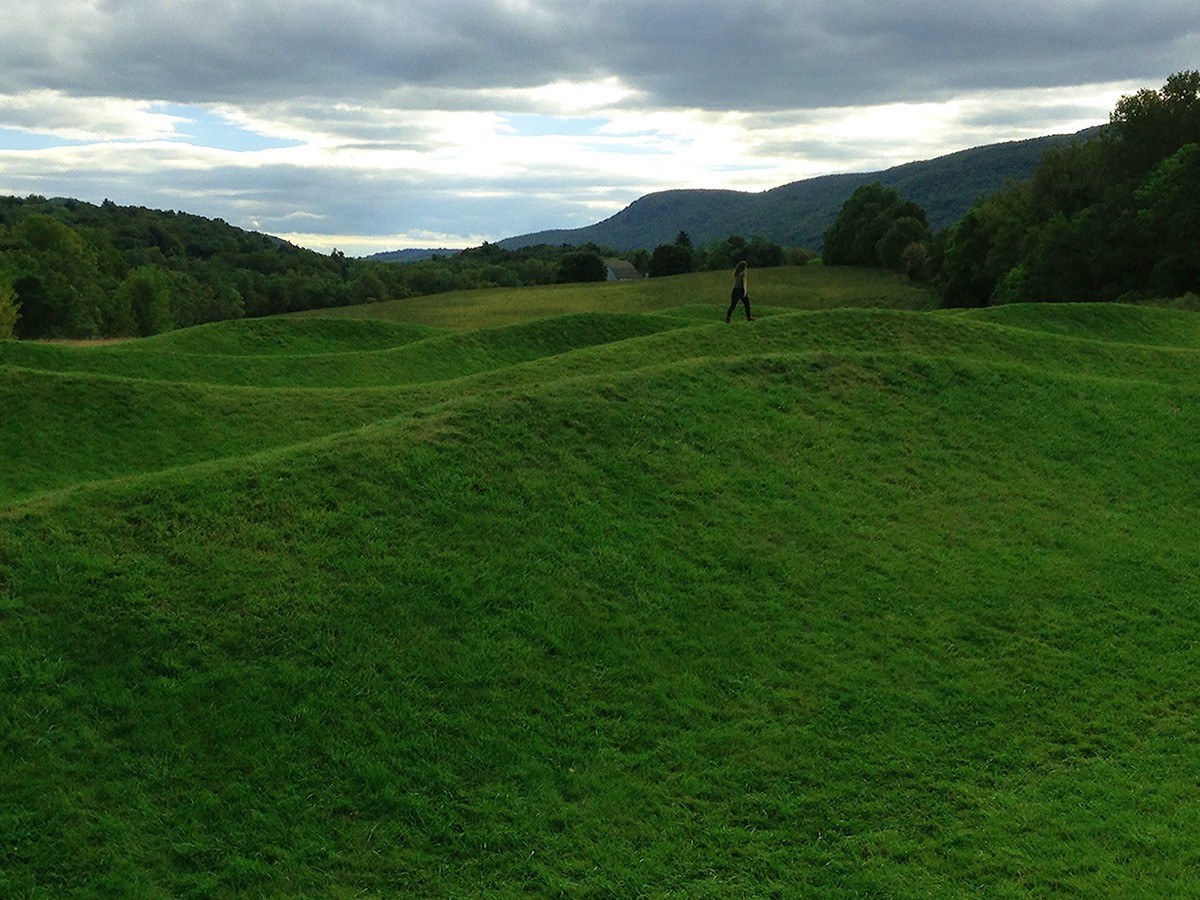 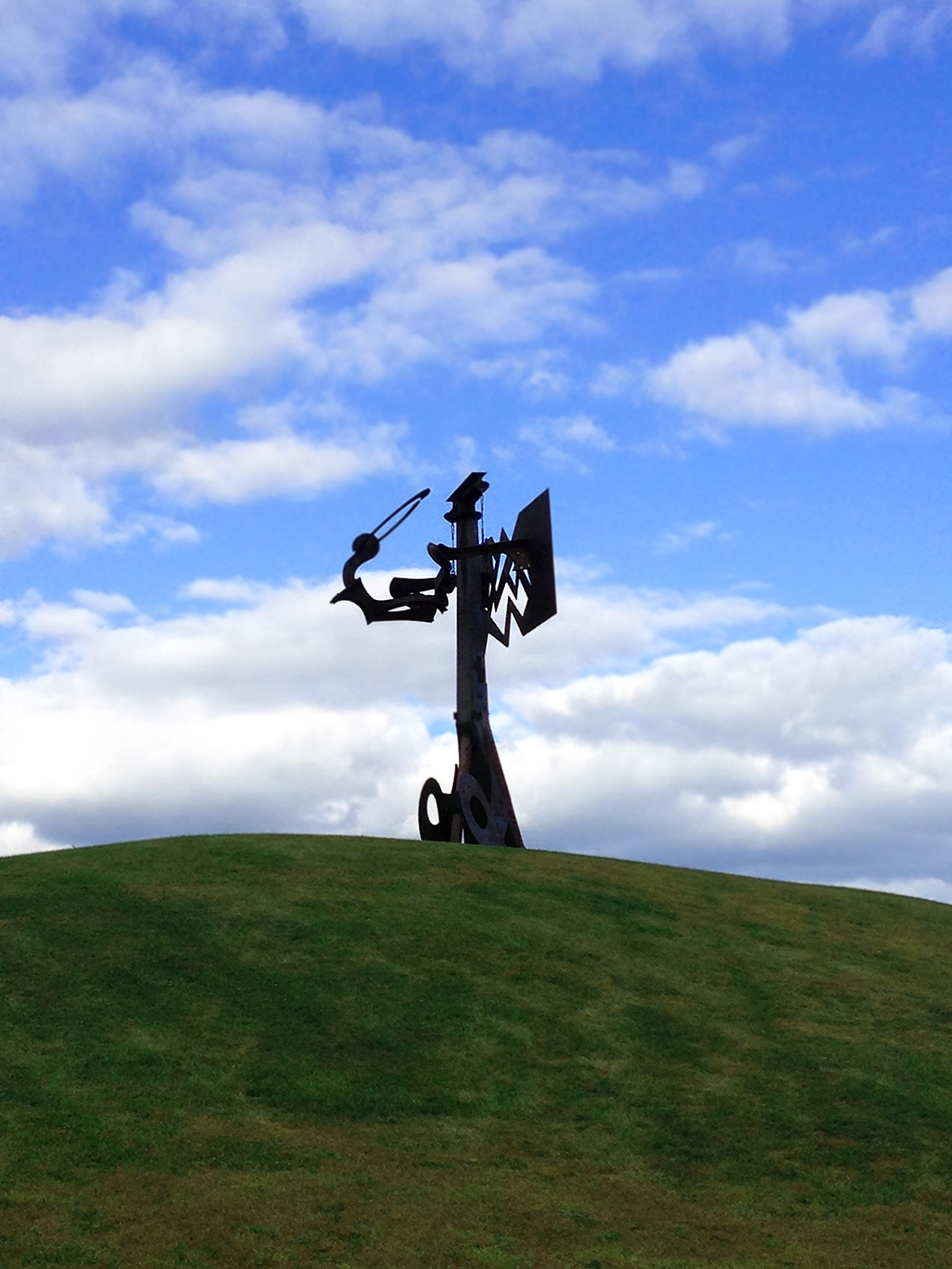