As a child, I was an aspiring architect who took a great interest in Frank Lloyd Wright. I read up on all of his major works, from Oak Park to Taliesin to the Guggenheim Museum, and of course, Fallingwater. I remember feeling mystified by the Fallingwater design; how could a house actually be built over a running waterfall? I’ve always wanted to experience first-hand this ingenious Wright creation, and on a recent trip to Pittsburgh, that chance finally came to fruition.

Fallingwater is located in the Laurel Highlands of the Allegheny Mountains, 65 miles southeast of central Pittsburgh. The property, often referred to as Bear Run, was purchased by department store mogul Edgar J. Kaufmann, and originally served as a rural retreat for the female employees who worked at his store in downtown Pittsburgh. With the onset of the Great Depression, it became exceedingly difficult for his employees to make their way out to Bear Run, and the sleeping cabins began to deteriorate. Kaufmann’s son, Edgar, Jr., was Frank Lloyd Wright’s apprentice at the time, and so he called on his son’s esteemed mentor to design a country home for the family that provided spectacular views of Kaufmann’s favorite spot on the property – the waterfall.

Construction began on Fallingwater in April of 1936 and was completed two years later, followed by the guest house in 1939. The home was lived in by the Kaufmann family until 1963, when it was entrusted by Edgar, Jr. to the Western Pennsylvania Conservancy, which to this day still manages and maintains the property. The conservancy offers tours throughout the year, except in January and February. The Guided House Tour lasts approximately one hour, and photography is not permitted. My partner and I opted for the In-Depth Tour, which is a bit more expensive but much more extensive, plus you are permitted to take pictures.

The In-Depth Tour is limited to early morning departures in the colder months. We were told to check-in by 8:30 for our 8:45 tour time. From Pittsburgh it’s a 90-minute drive, so we stayed in nearby Uniontown the night before. We arrived on a beautiful, unseasonably warm November morning. The sun was making its way up from the eastern horizon as we disembarked on our In-Depth Tour led by our very knowledgeable guide, Celeste.

Before escorting us to the main house, Celeste brought the group to a jutted outcropping of limestone, which is where Wright supposedly got the inspiration for his cantilevered design. He wanted the physical design of the house to mirror the exposed surface of the very mountain on which it was being built. This was part of an overarching theme for Fallingwater – to create harmony between man and nature and to integrate the house with its natural surroundings.

Actually seeing the house in-person for the first time was truly an awe-inspiring moment – Fallingwater in all its cantilevered glory. There are so many unique details that Wright designed with Mother Nature in mind, like the glass-encased suspended stairwell in the living room that literally drops down to the running water; the cornered windows where glass meets glass to maximize the view; the boulders that not only provide structural support but are also exposed throughout the house in the floors and walls; the light ochre color of the concrete, inspired by the sere leaves of the rhododendron that grow wild throughout the property; and the list goes on and on. It’s no wonder that Fallingwater was recognized by the American Institute of Architects as the “best all-time work of American architecture.”

My visit to Fallingwater lived up to every expectation I had about the house, the waterfall, and the beautiful property that surrounds both. Frank Lloyd Wright’s creation is an architectural feat that, to this day – almost 80 years later – still holds up as a masterpiece of modern design and construction. Anyone traveling to Pittsburgh should absolutely plan on visiting Fallingwater and tour one of the world’s most famous private residences. 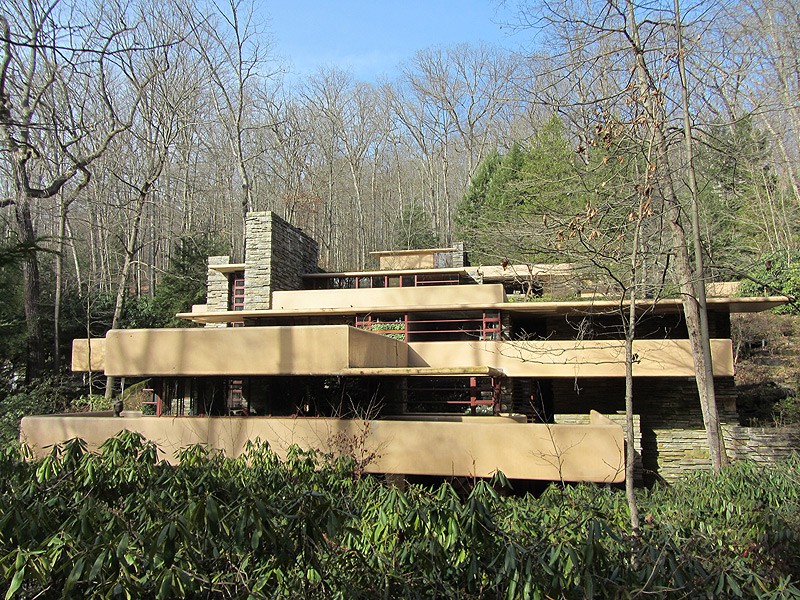 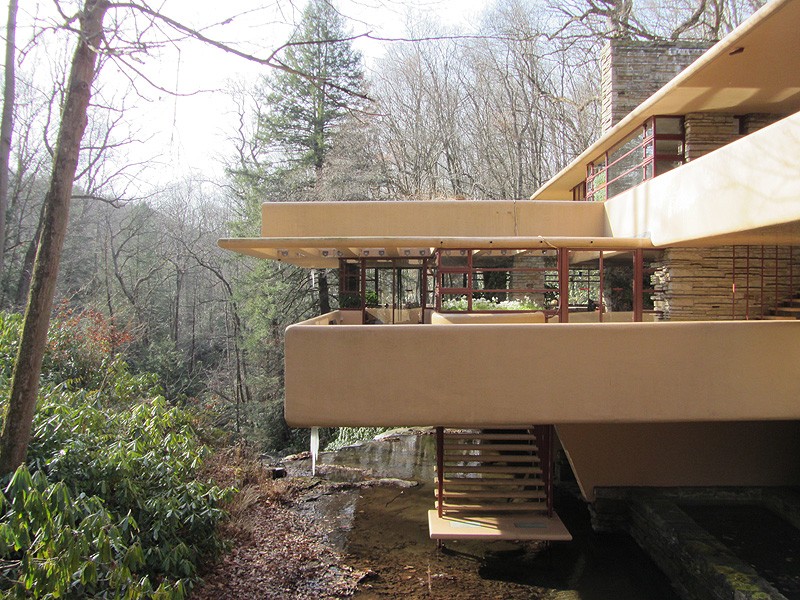 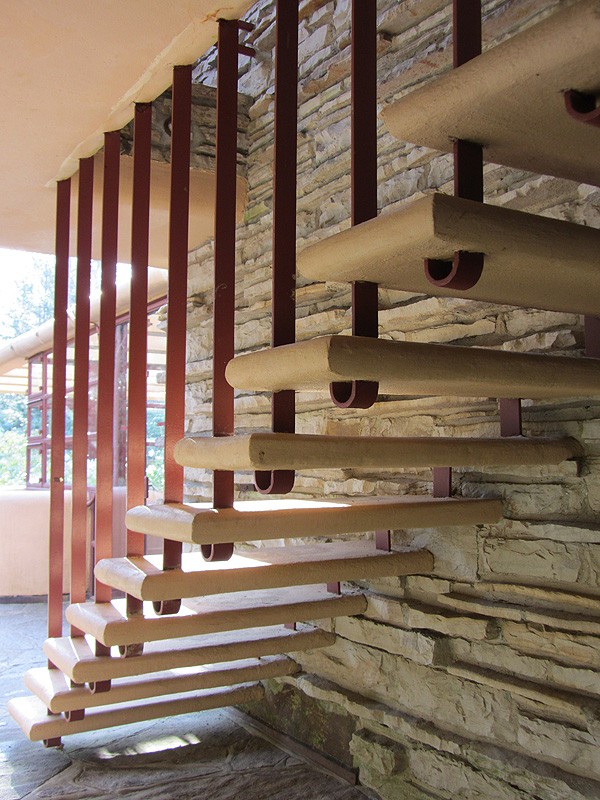 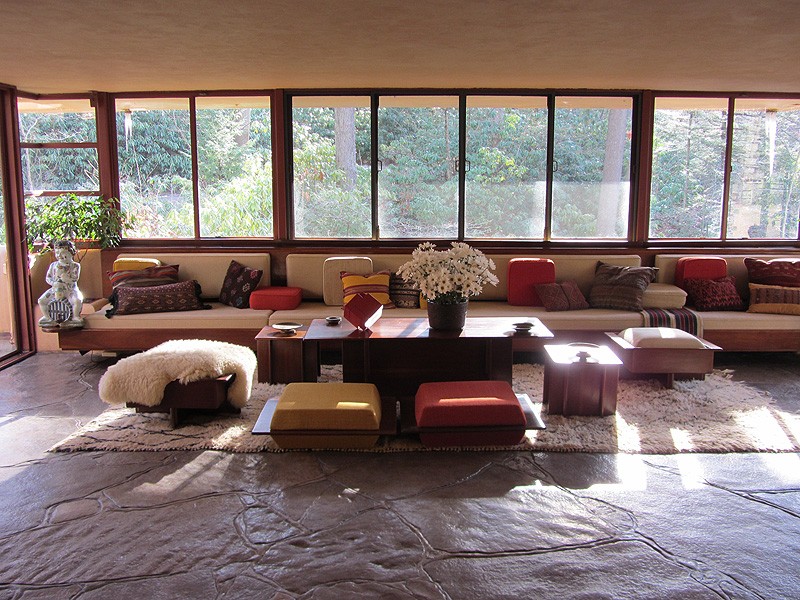 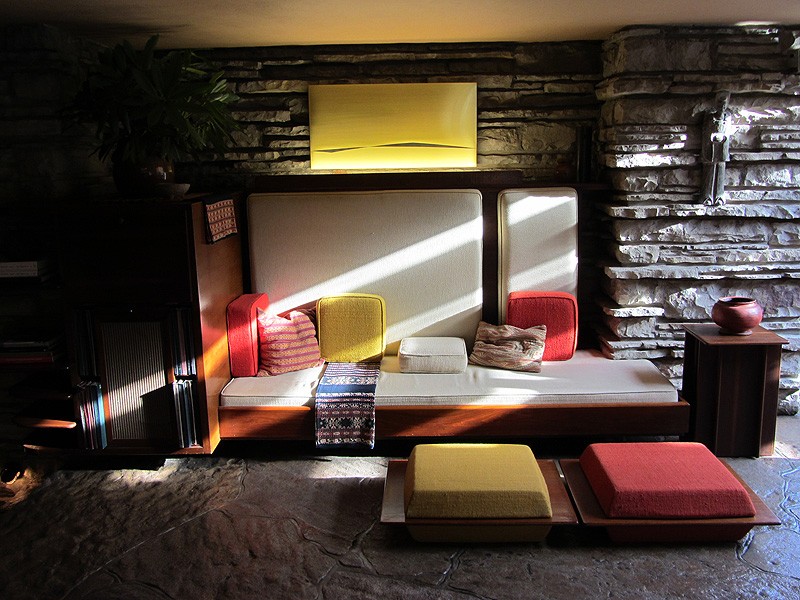 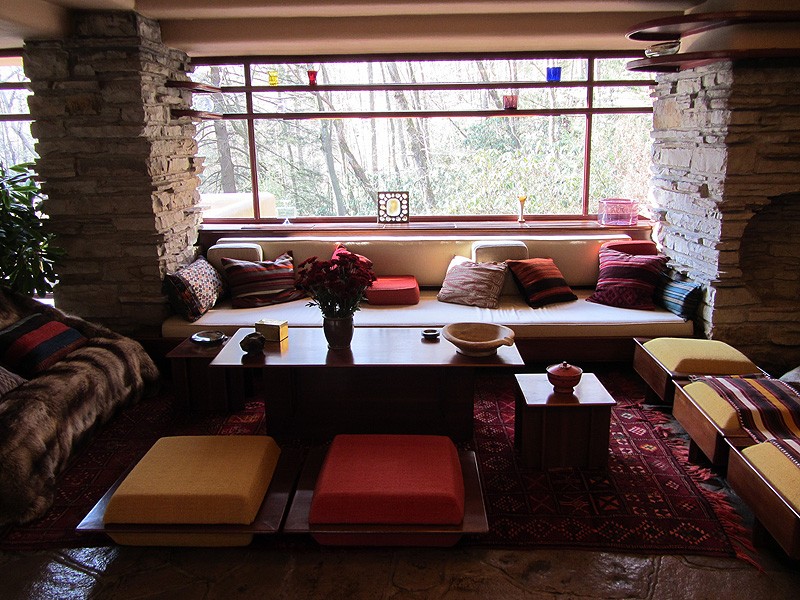 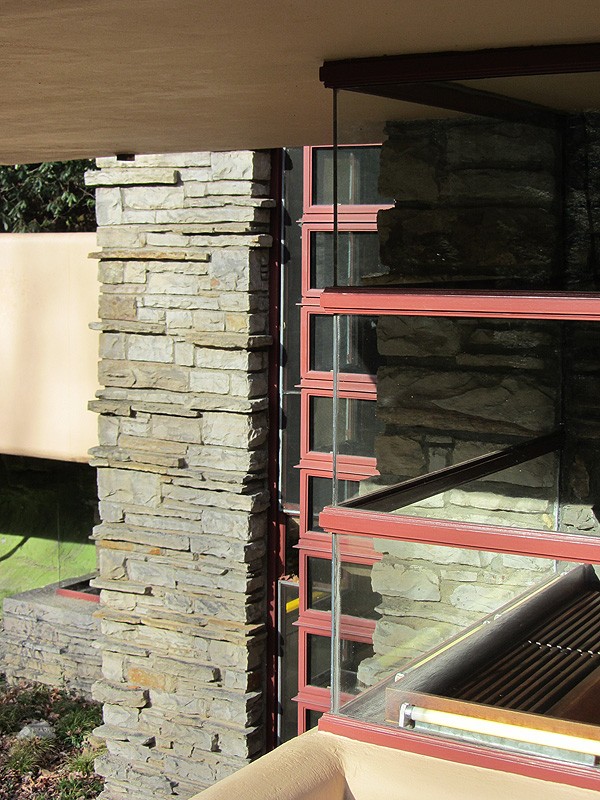 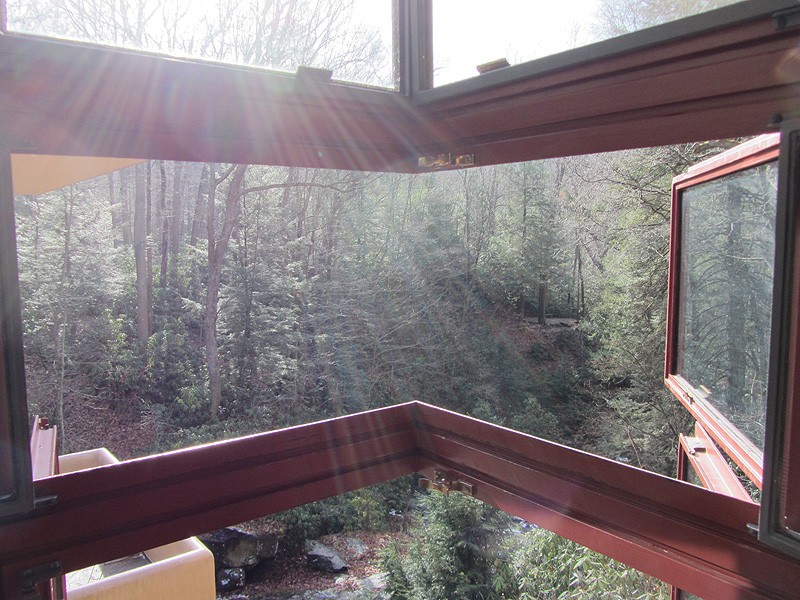 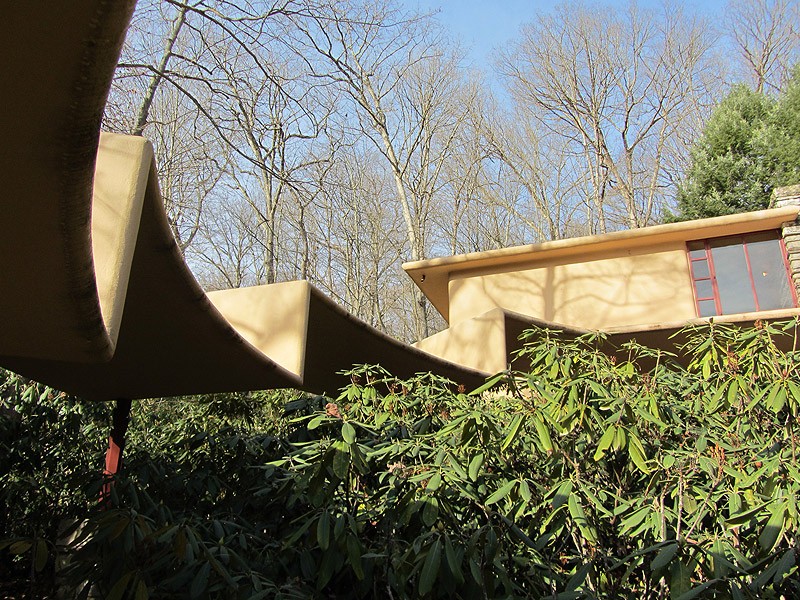 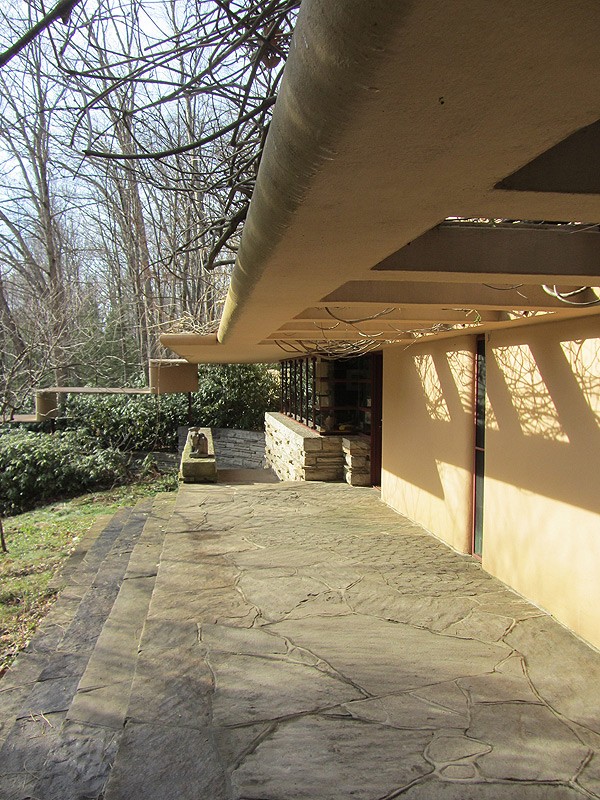 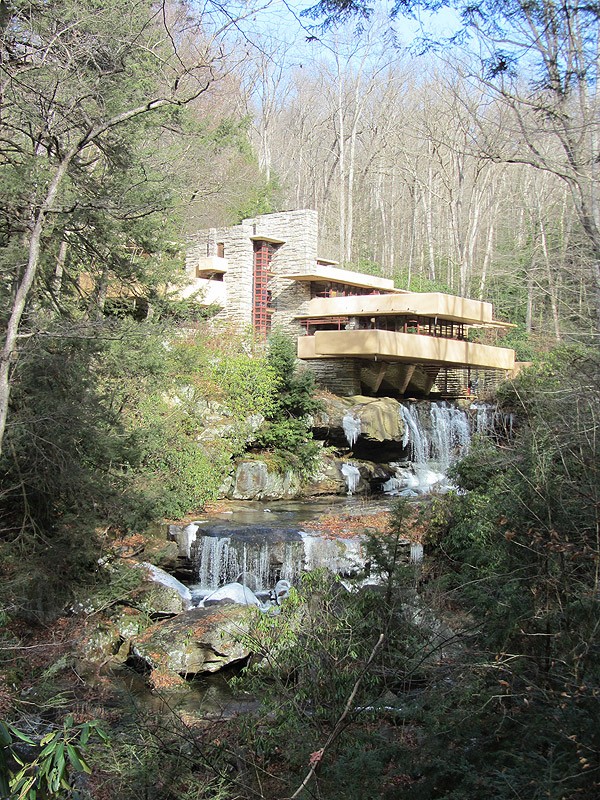