Bergamo is one of the most attractive cities in Italy. Located at the foot of the Orobie Alps, the city proper is divided into two main parts: the historic Città Alta, perched on a hill and fortified by the impeccably maintained 16th-century Venetian Walls, and the modern Città Bassa, with a fin de siècle framework that extends into the plains of Lombardy. While the Italian centro storico is often a tourist trap, the well-heeled Bergamaschi inhabit both parts of town, creating an omnipresent sense of authenticity that exudes local flavor no matter where you are.

Charles and I spent a few hours in Bergamo during our trip to Italy in 2018. I was enchanted by the city and knew I needed to spend more time there. Fast forward a year later to my solo trip, I used Bergamo as a base for three nights while exploring the central region of northern Italy. I stayed at Relais San Lorenzo, a sleek SLH property in Bergamo Alta constructed atop an archaeological site dating back to the 6th-century AD. My room was masterly decorated with top Italian furnishings and had a huge casement window that swung open to reveal the tree-lined Piazza Lorenzo Mascheroni.

I arrived at noon on a glorious October Saturday. There wasn’t a cloud in the sky, and the temperature climbed into the low 70s. After checking in, I set out on foot to get my bearings. There were numerous notable sites I had already seen during my 2018 trip, including the gilded Baroque interiors of the Basilica di Santa Maria Maggiore, the opulent 15th-century Cappella Colleoni, and the Piazza Vecchia, which is surrounded by several additional high-profile buildings. I decided to explore Castello di San Vigilio, an ancient citadel on a hill high above the Città Alta. Plus, the concierge had given me the name of a restaurant with a patio overlooking the city below. A funicular connects the upper town with the top of the hill, but I opted to burn off some calories before lunch and trek up the precipitous Via San Vigilio.

The view from the top was stunning. The rooftops, cupolas, and campaniles of Città Alta were laid out in front of me, surrounded by the Lombardian plain in fertile hues of green with an almost endless horizon of blue sky. The recommended Ristorante Baretto was packed with locals taking advantage of the beautiful autumnal weather. I left my name with the padrona and headed up to the castle.

Castello di San Vigilio was purchased by Bergamo in the 1960s and converted into a public park. The four original towers of the fortification are still intact, along with the bastions, embrasures, and walkways connecting them. Stately plane and horse chestnut trees are studded throughout the park. More stunning views unfolded before my eyes: ancient farmland set in the dales of undulating hillocks surrounding Bergamo, the jagged peaks of the Orobie Alps, and Monte Bastia from across the Serio river valley. It’s not surprising that for centuries, Bergamo’s conquerors—from the Venetians to the French—continued to use Castello di San Vigilio as a strategic military post.

After 45 minutes, I headed back down to Ristorante Baretto where my table was ready. I was seated on the patio with a brilliant vantage point of the city below. To my left was a young Italian couple, caught up in a heated conversation. They smoothed things over as soon as dessert hit the table. I ordered Casoncelli alla Bergamasca, a traditional pasta native to the region. Casoncelli are the lighter, airier sister of ravioli; alla Bergamasca refers to the sweet and savory preparation: a filling of ground meat, sausage, crushed amaretti cookies, and raisins, served with melted butter flavored with pancetta, sage, and Grana Padano. Can you guess how many casoncelli were left uneaten? 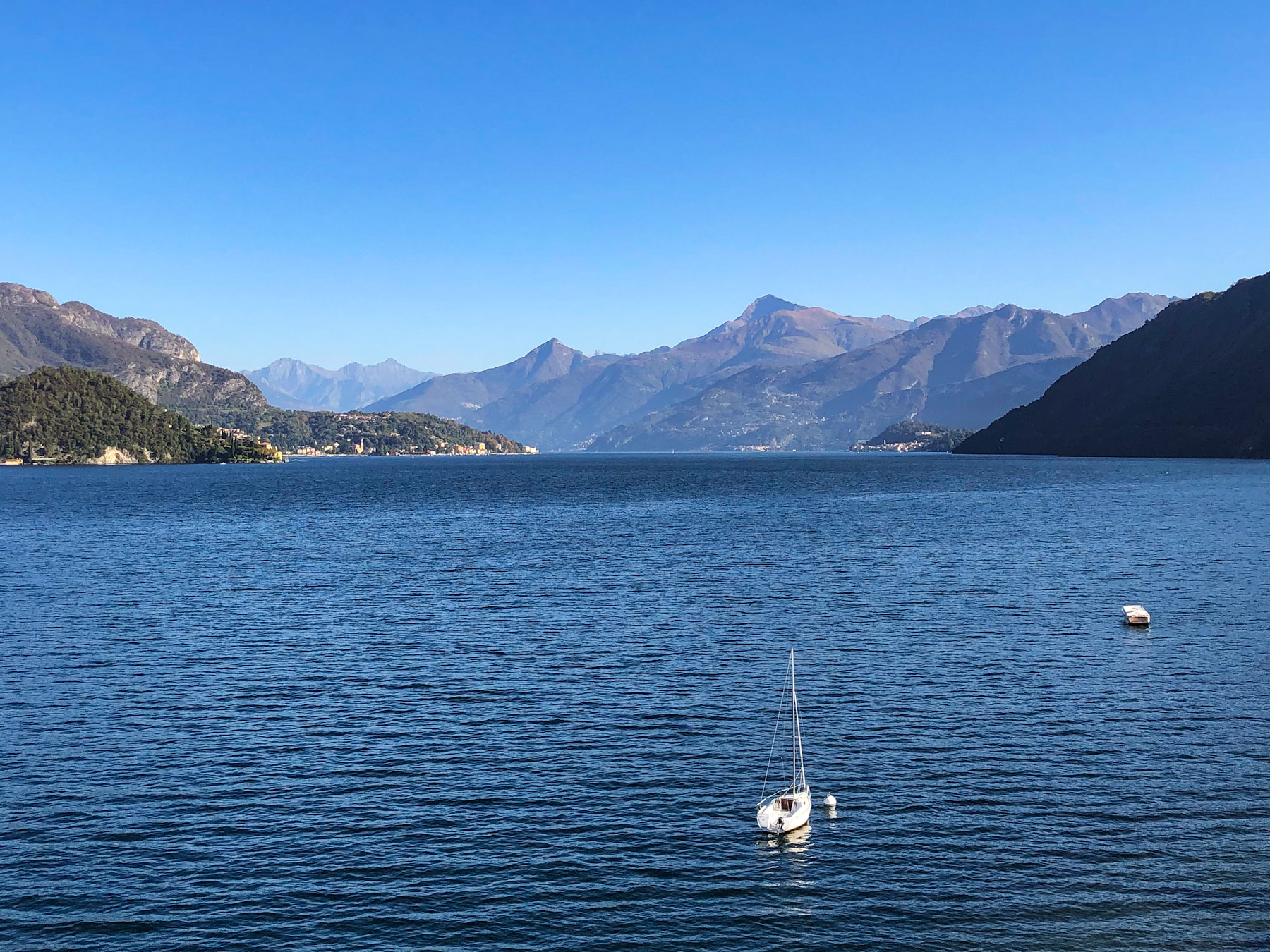 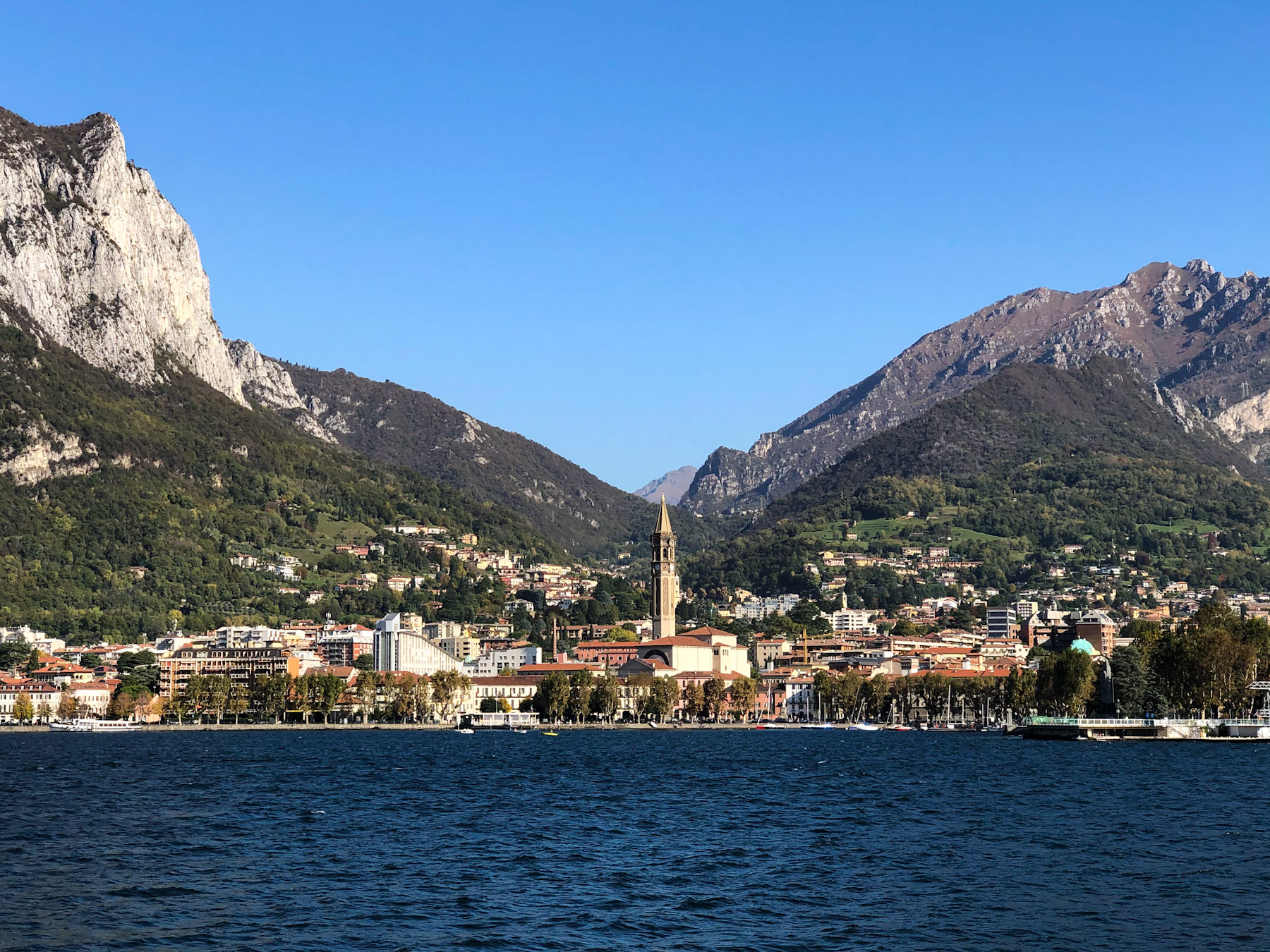 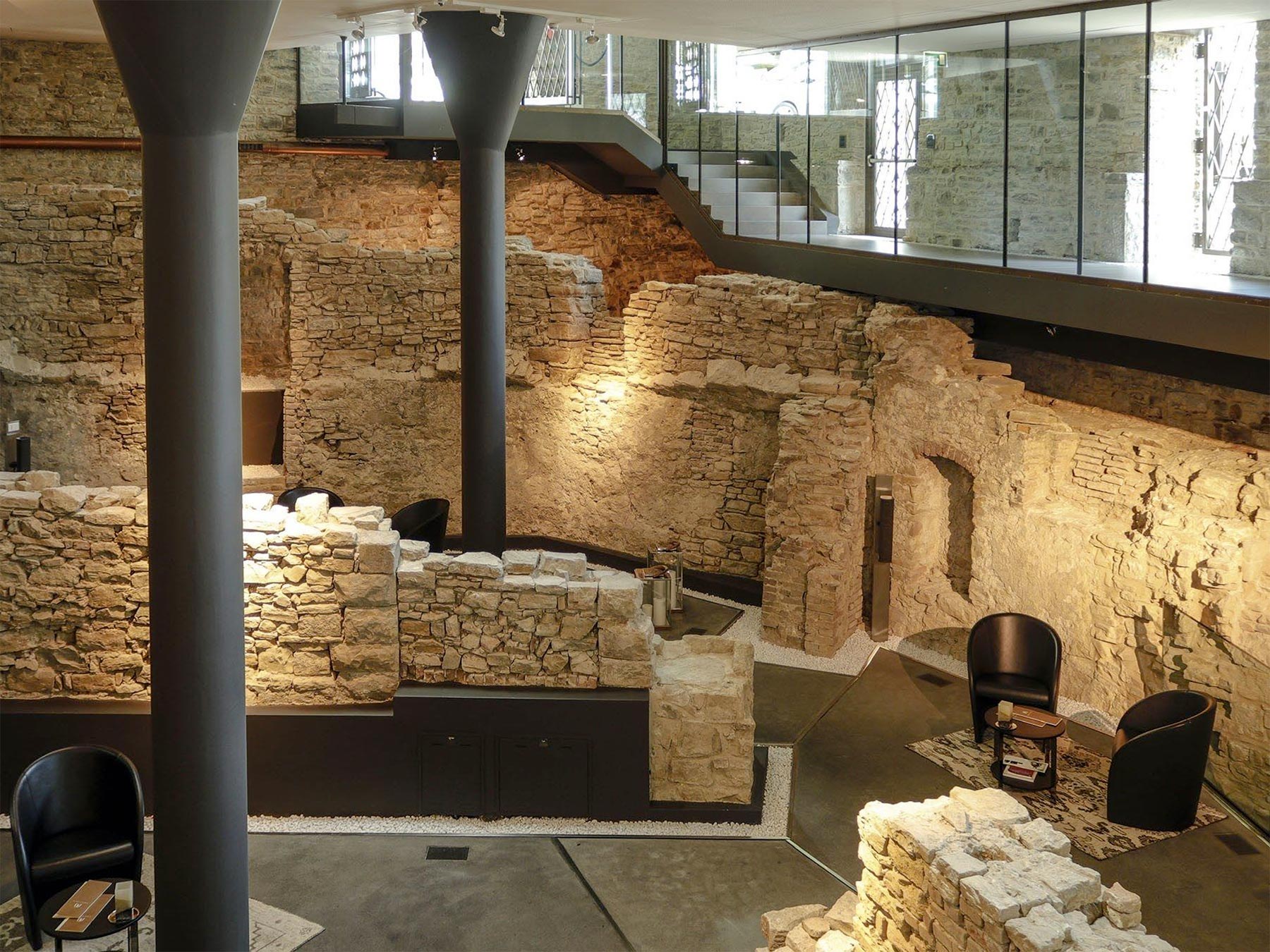 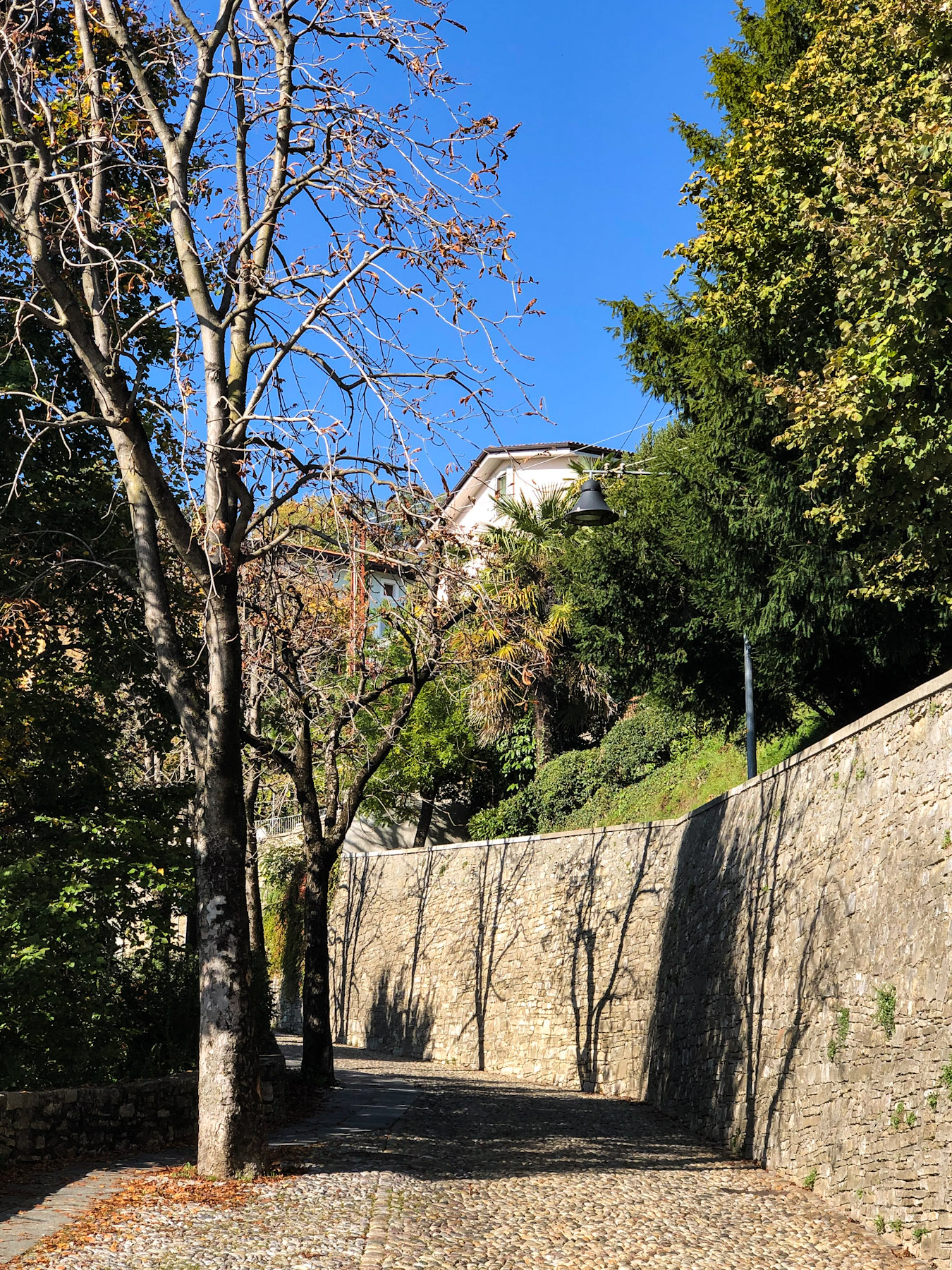 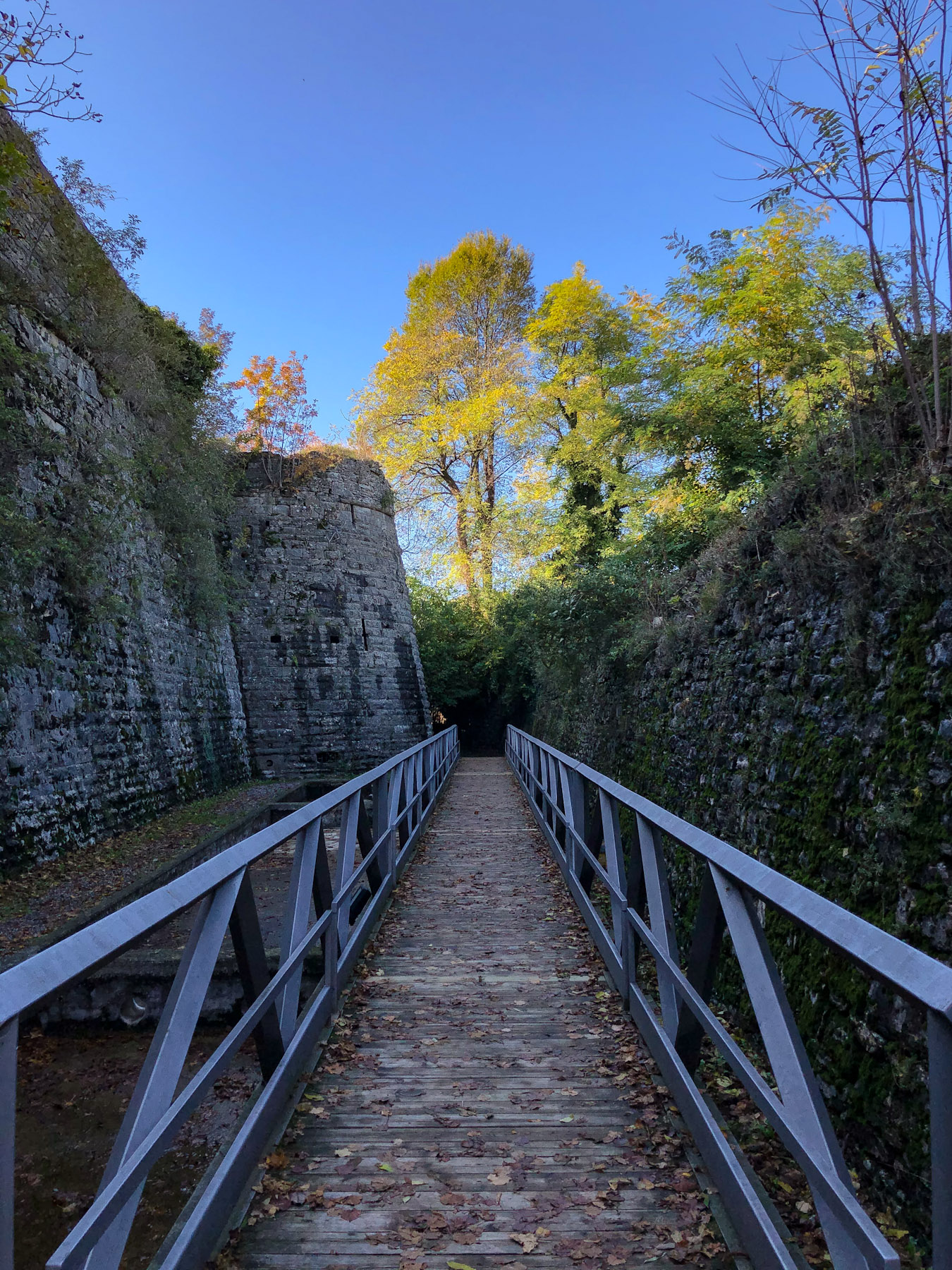 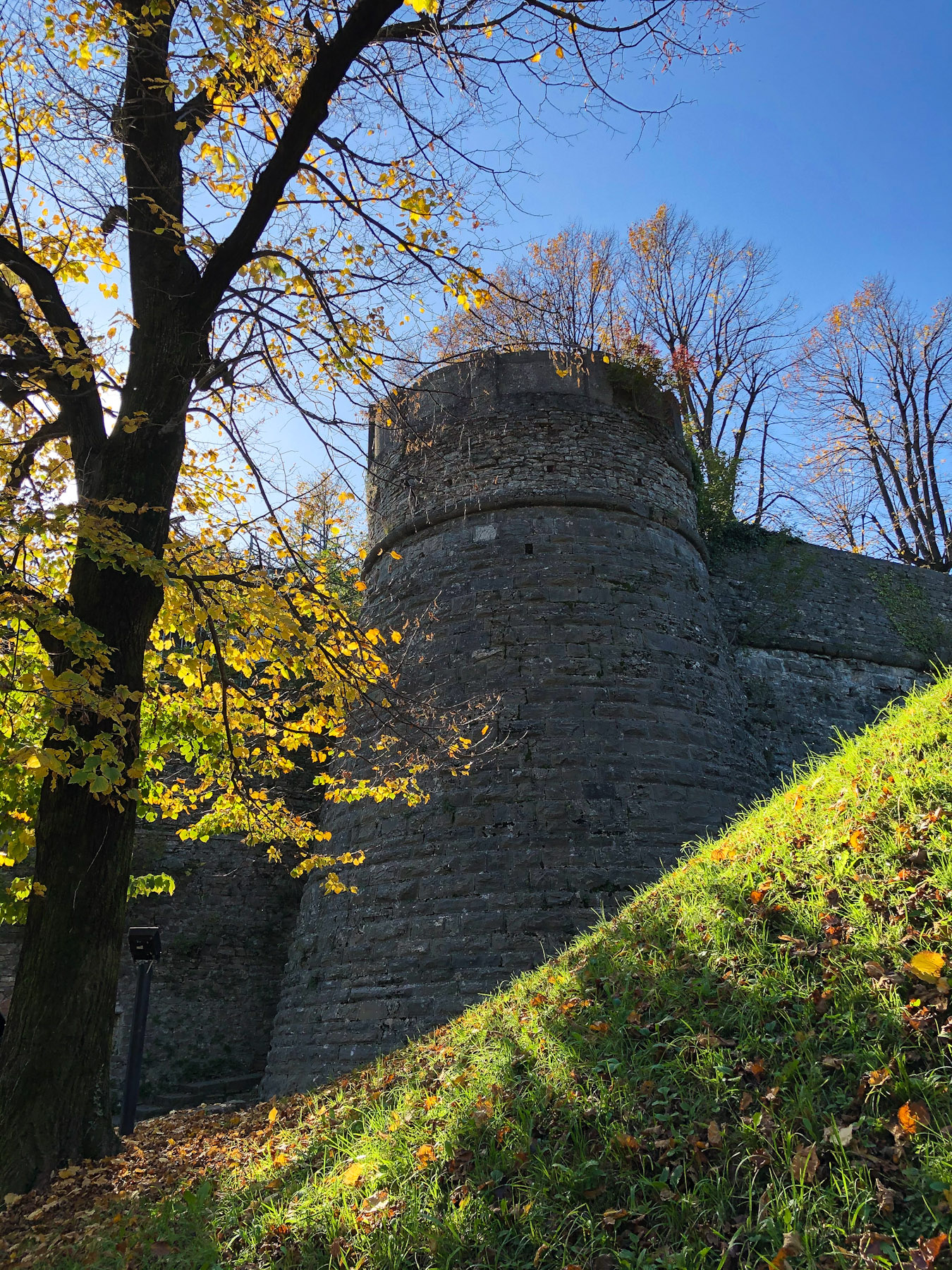 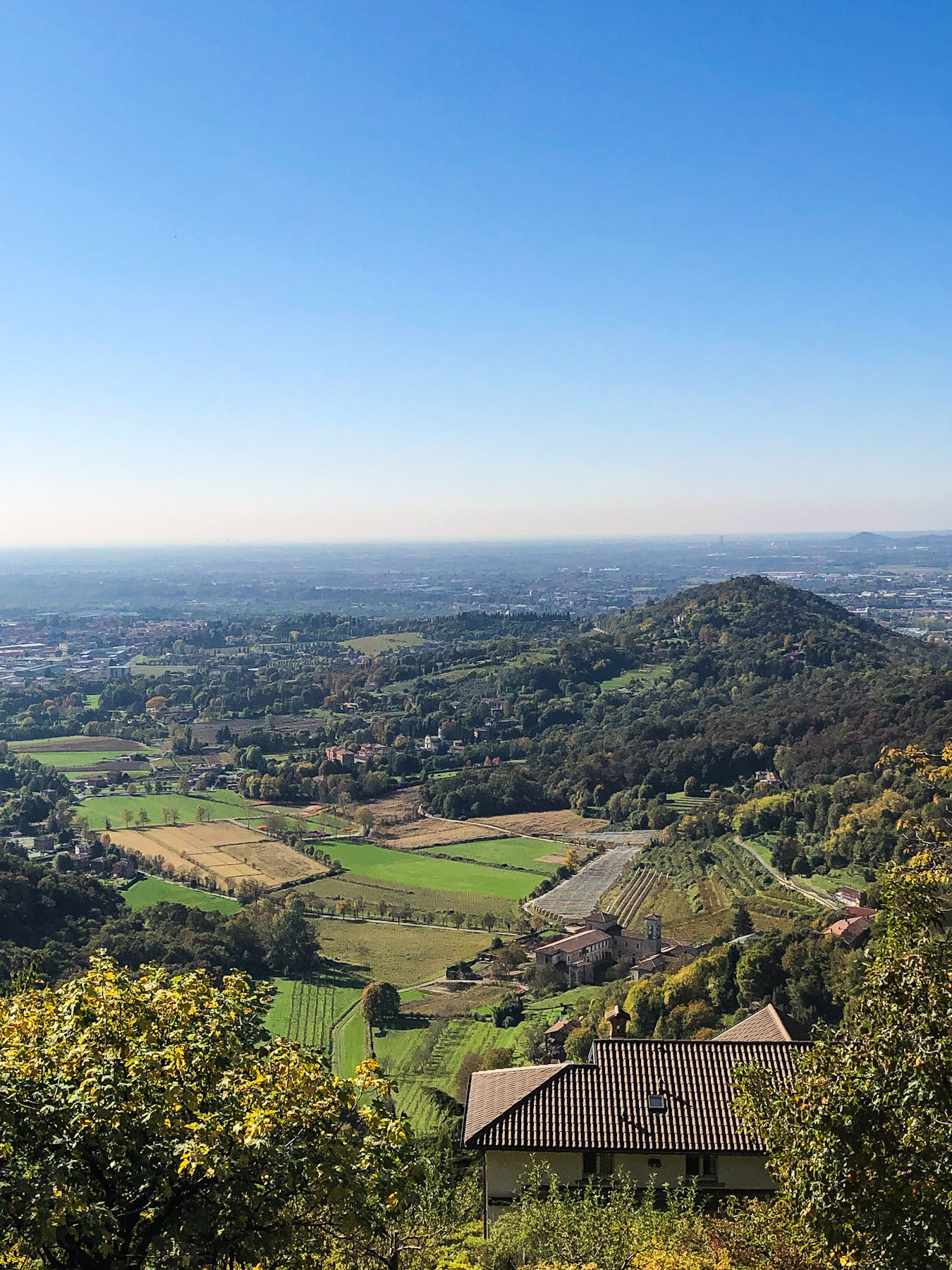 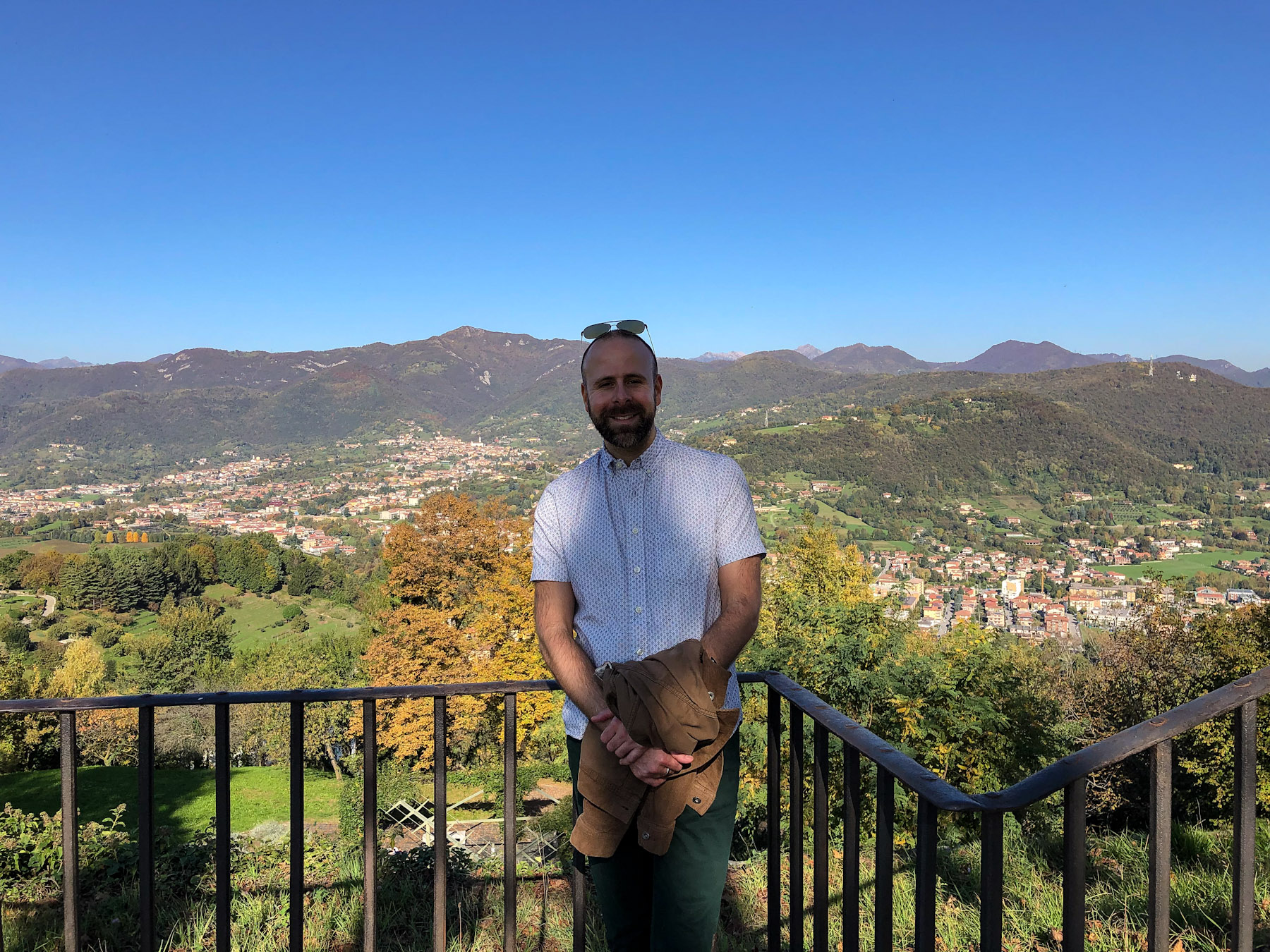 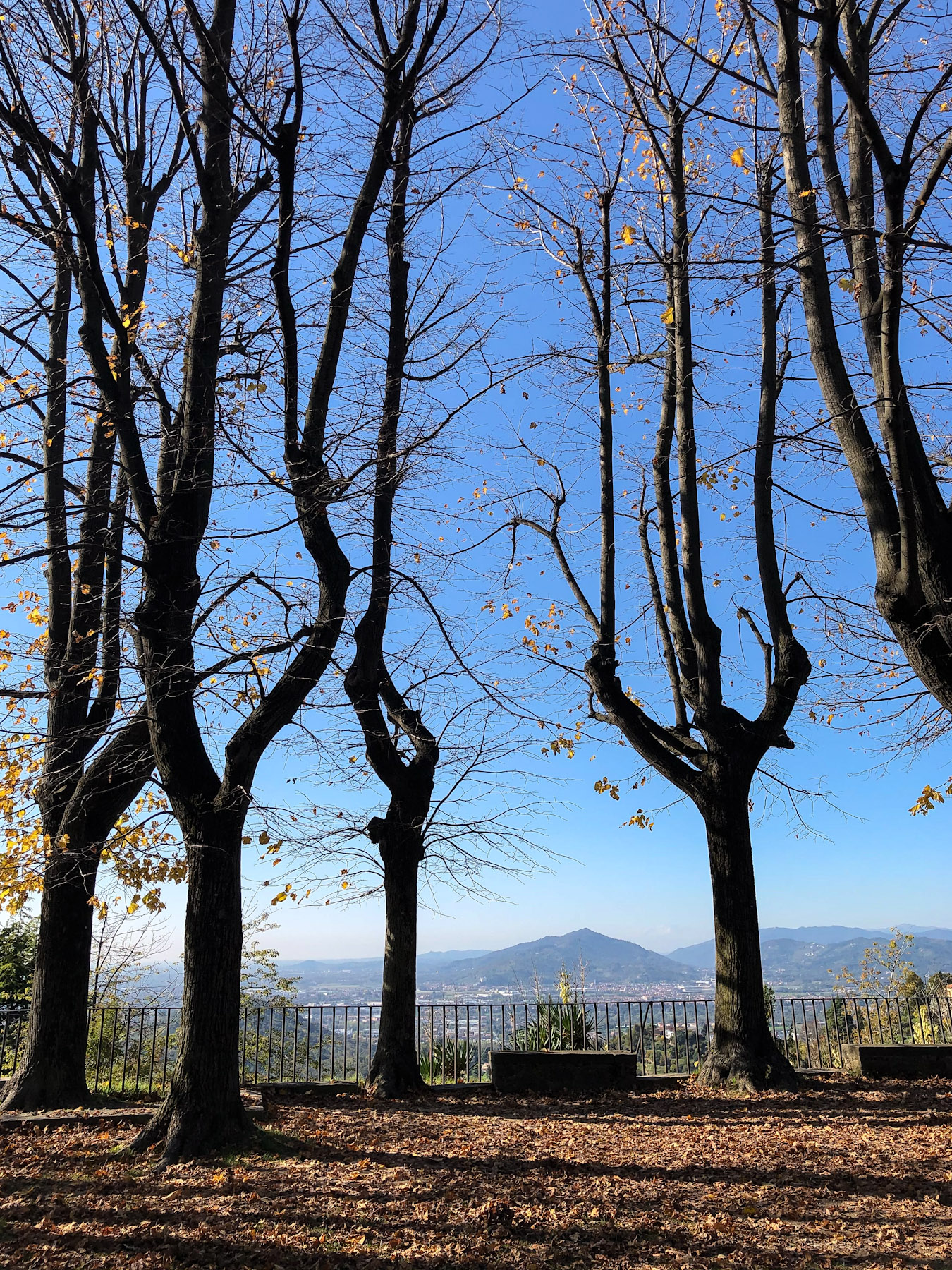 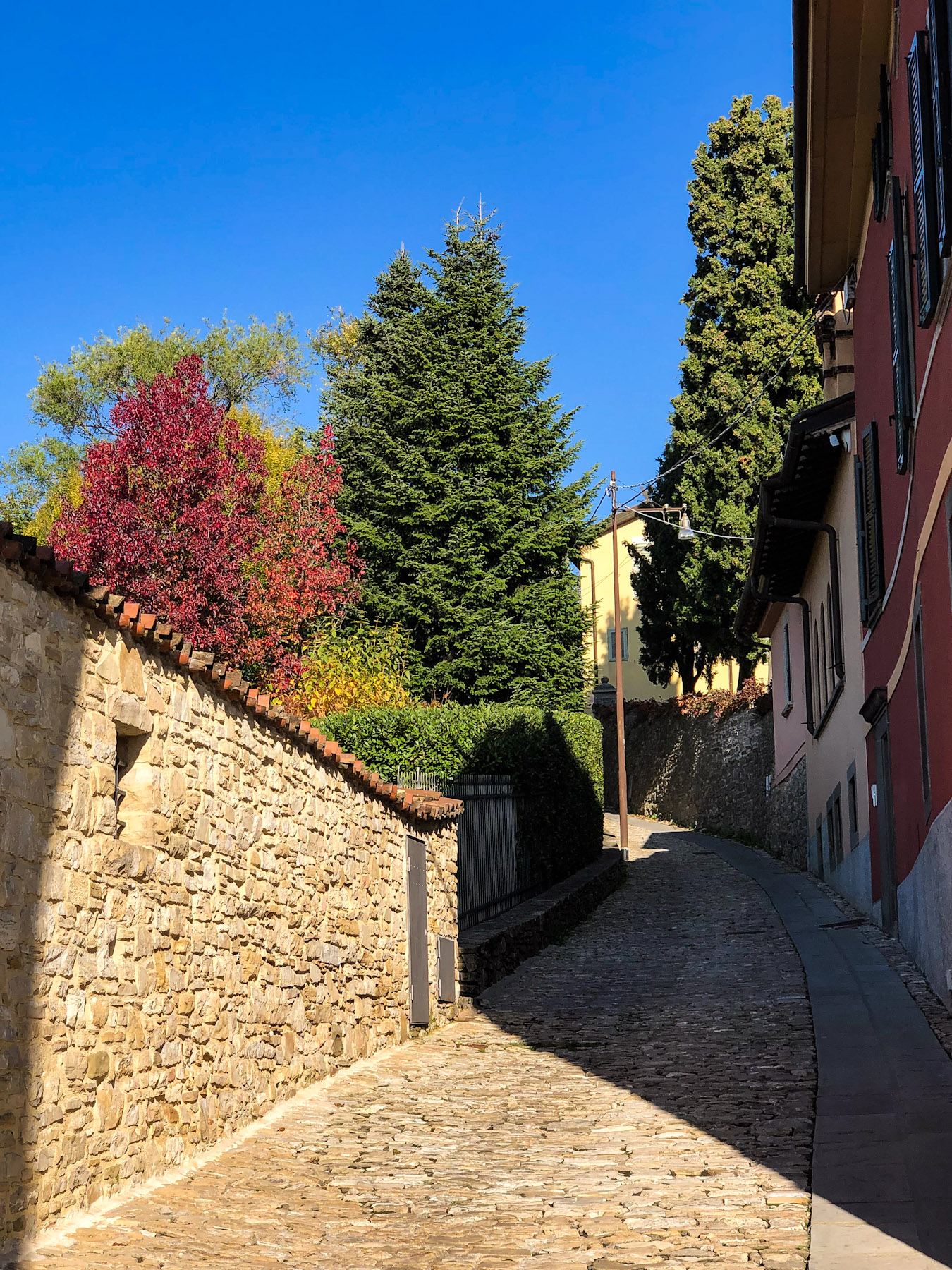 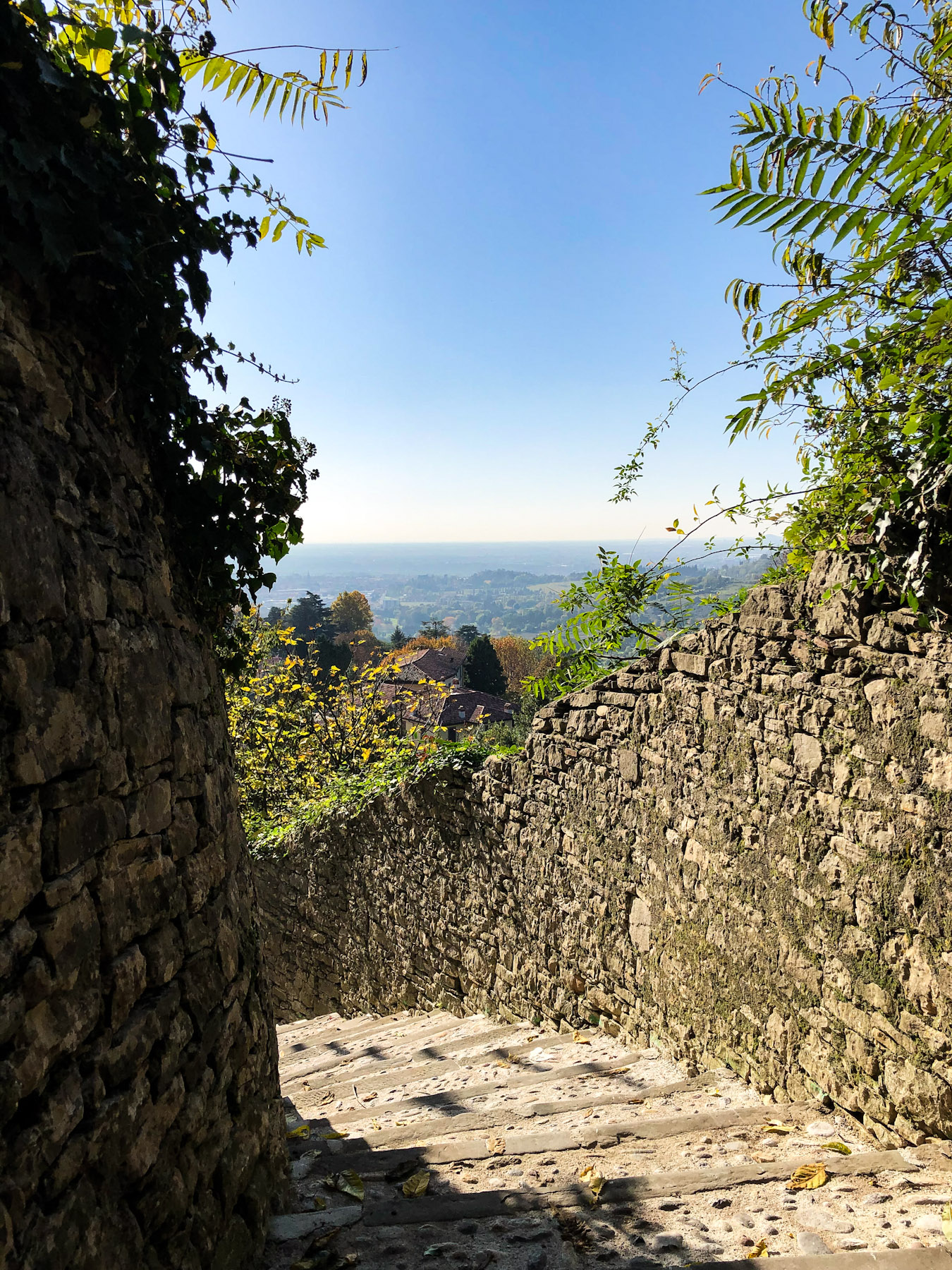 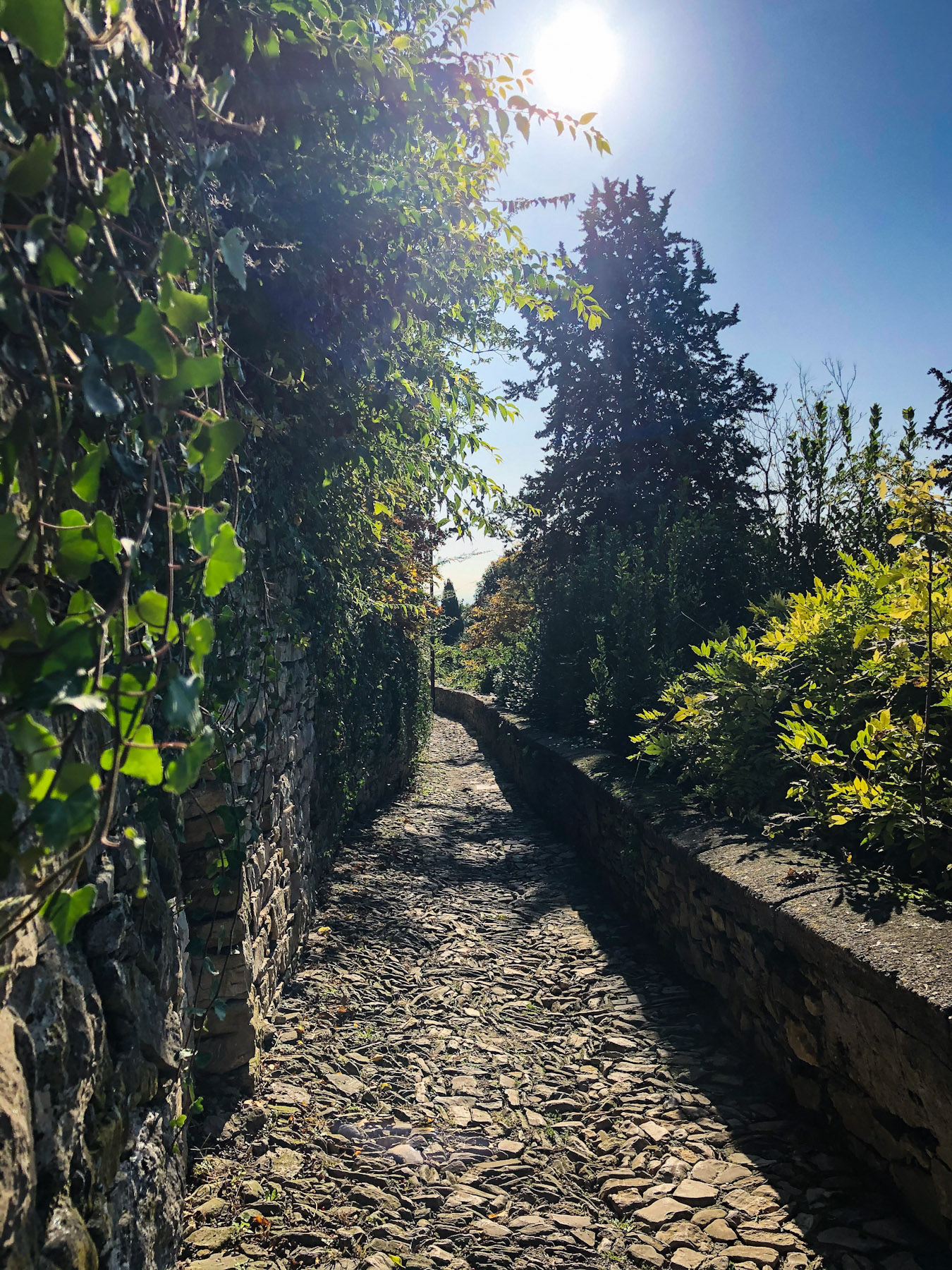 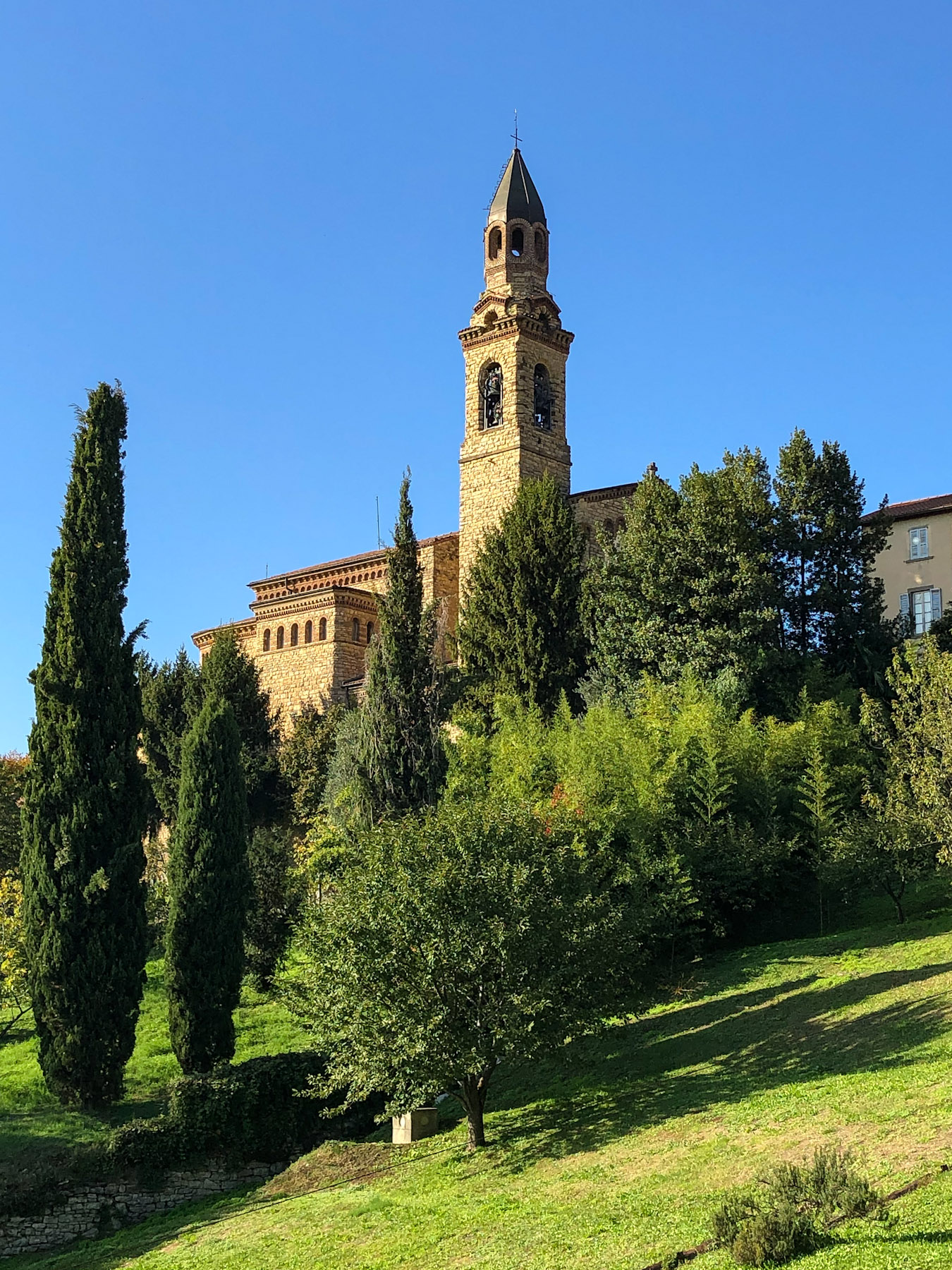 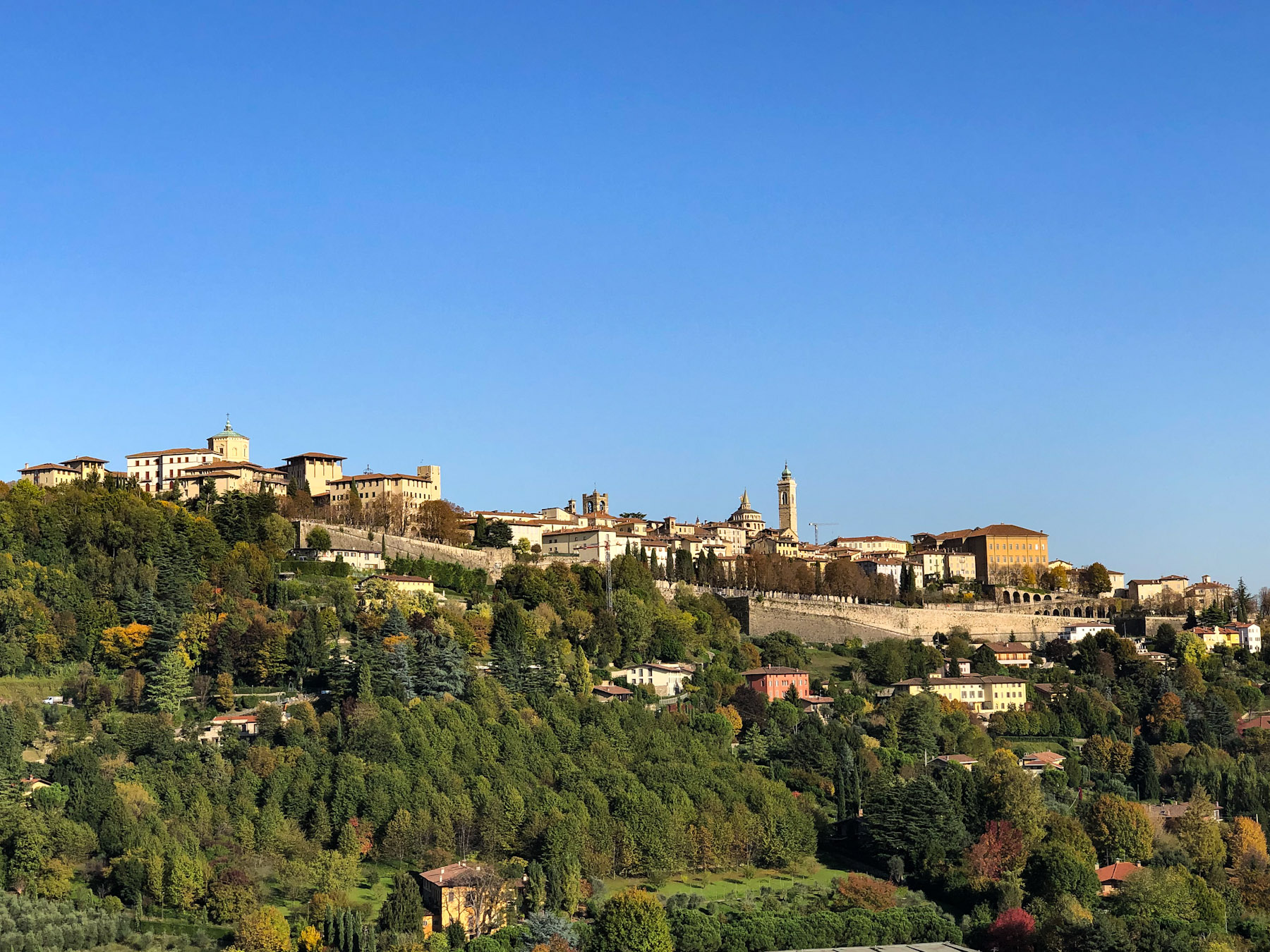 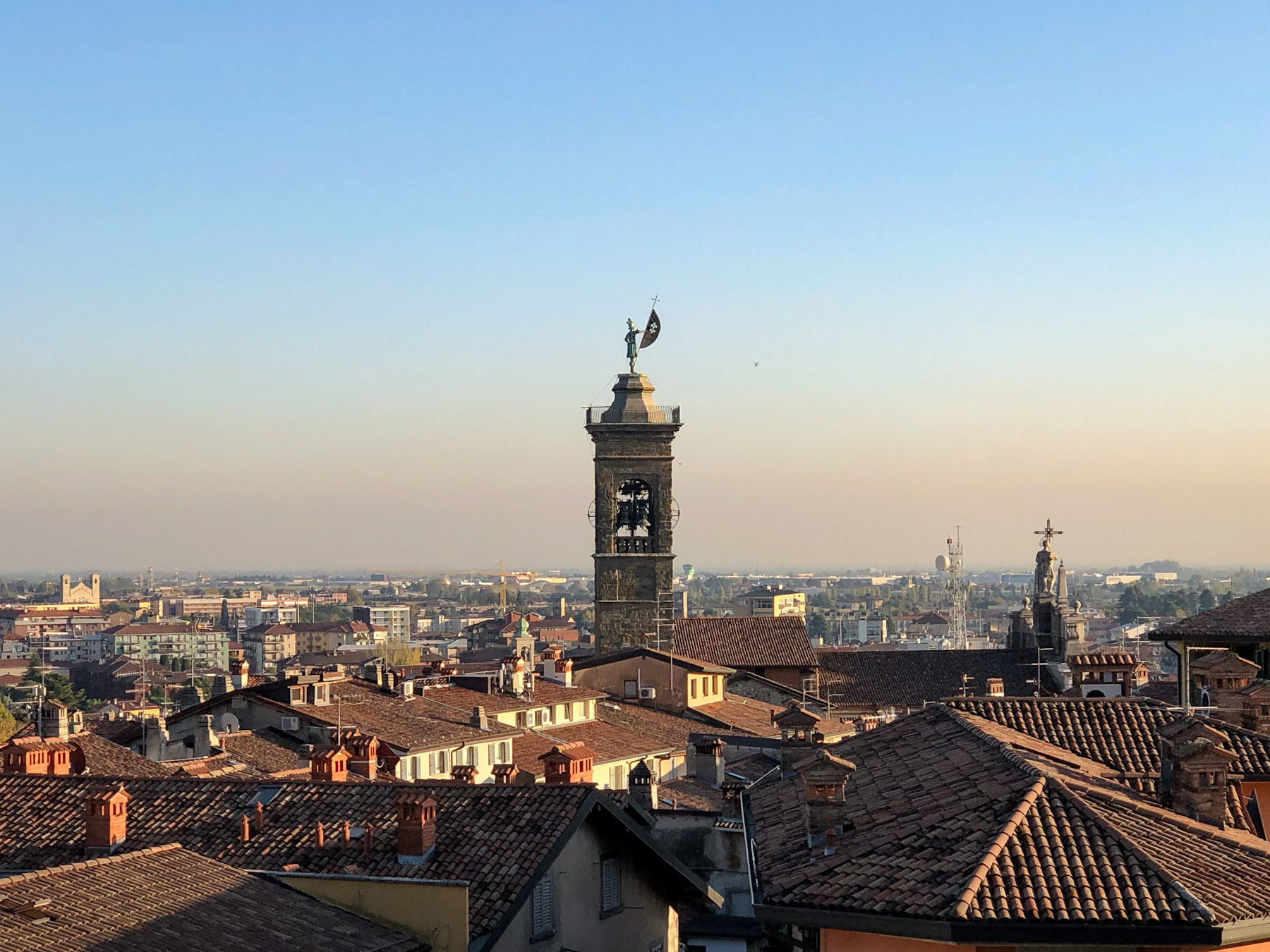 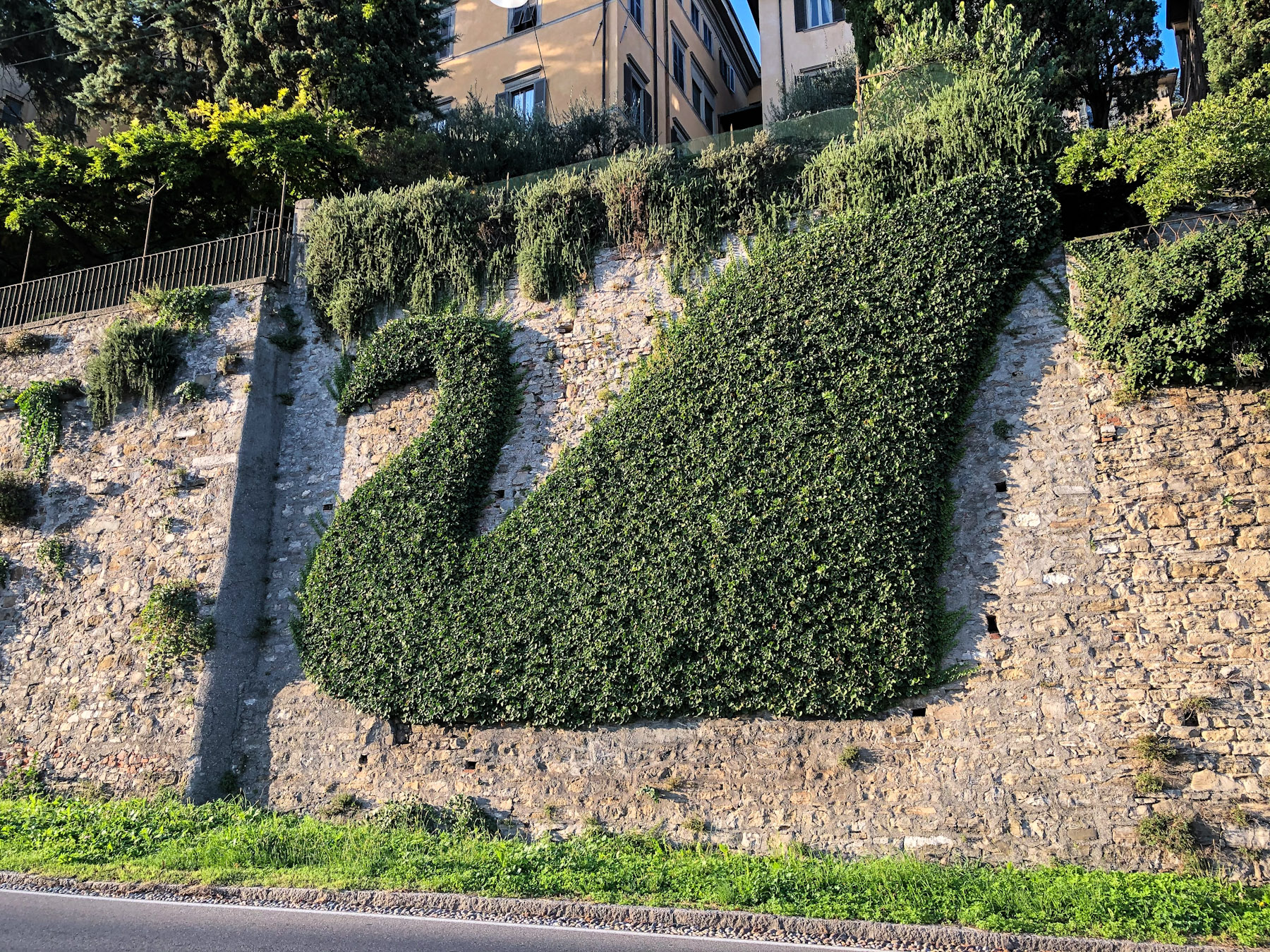 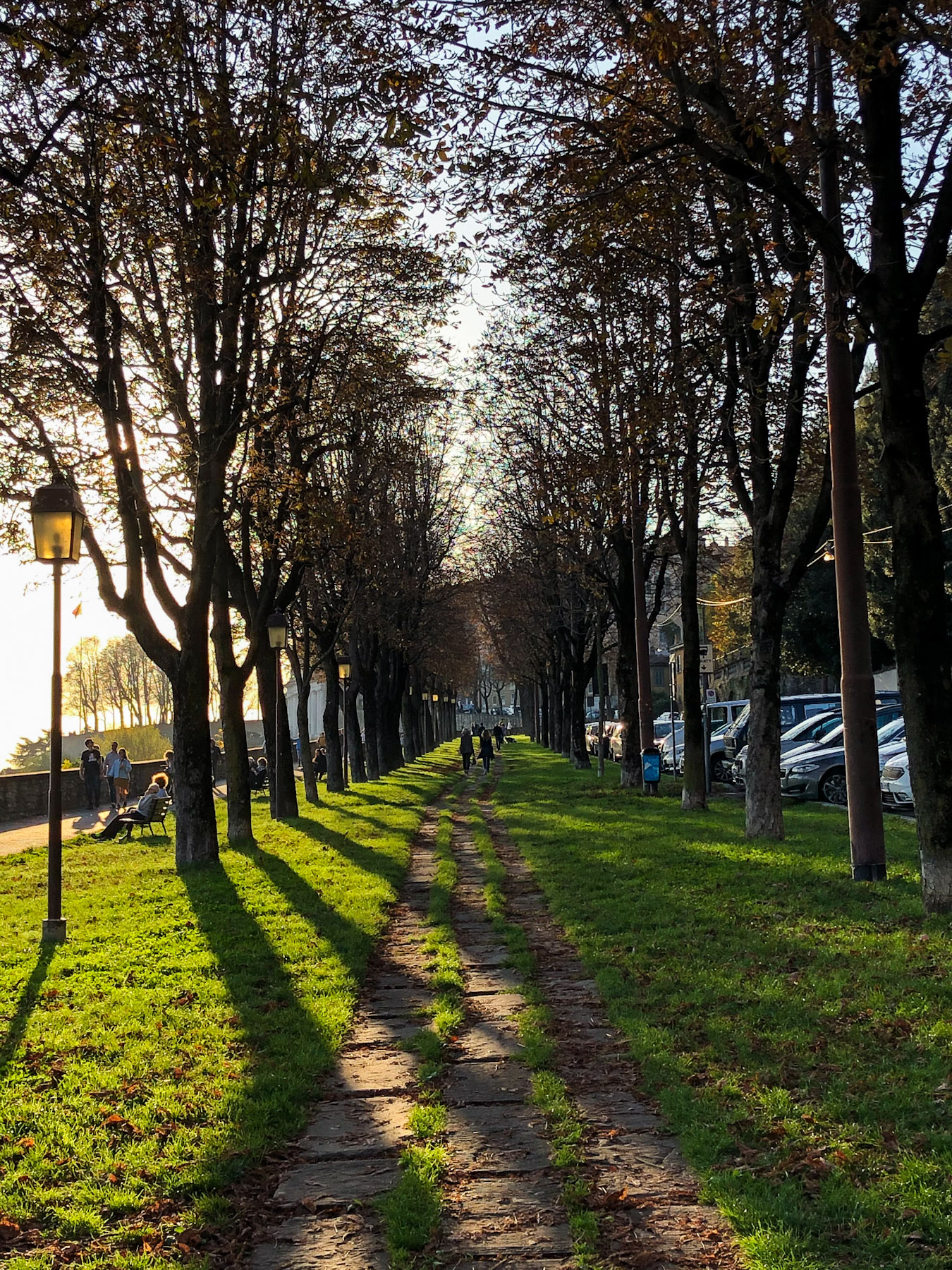 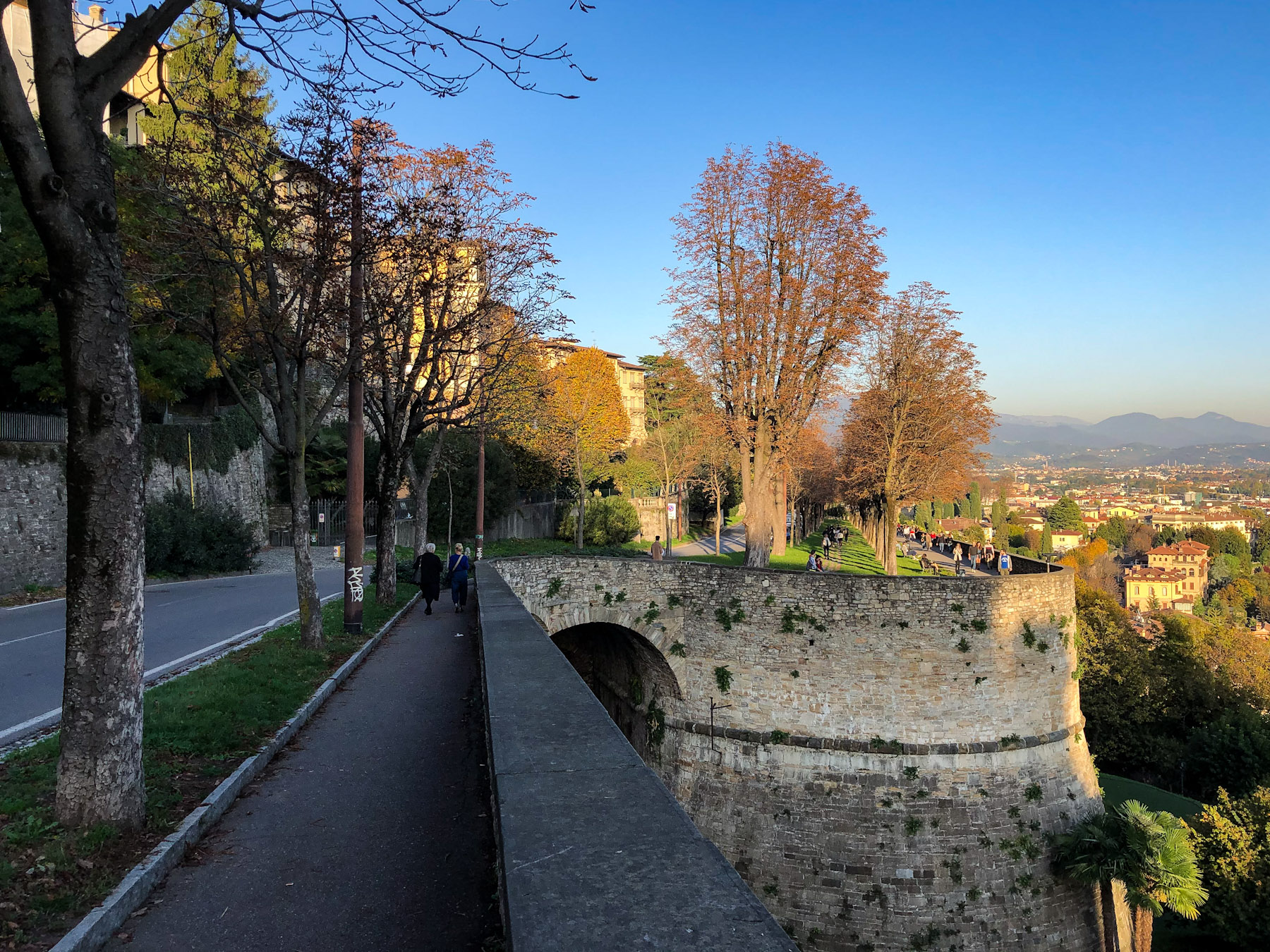 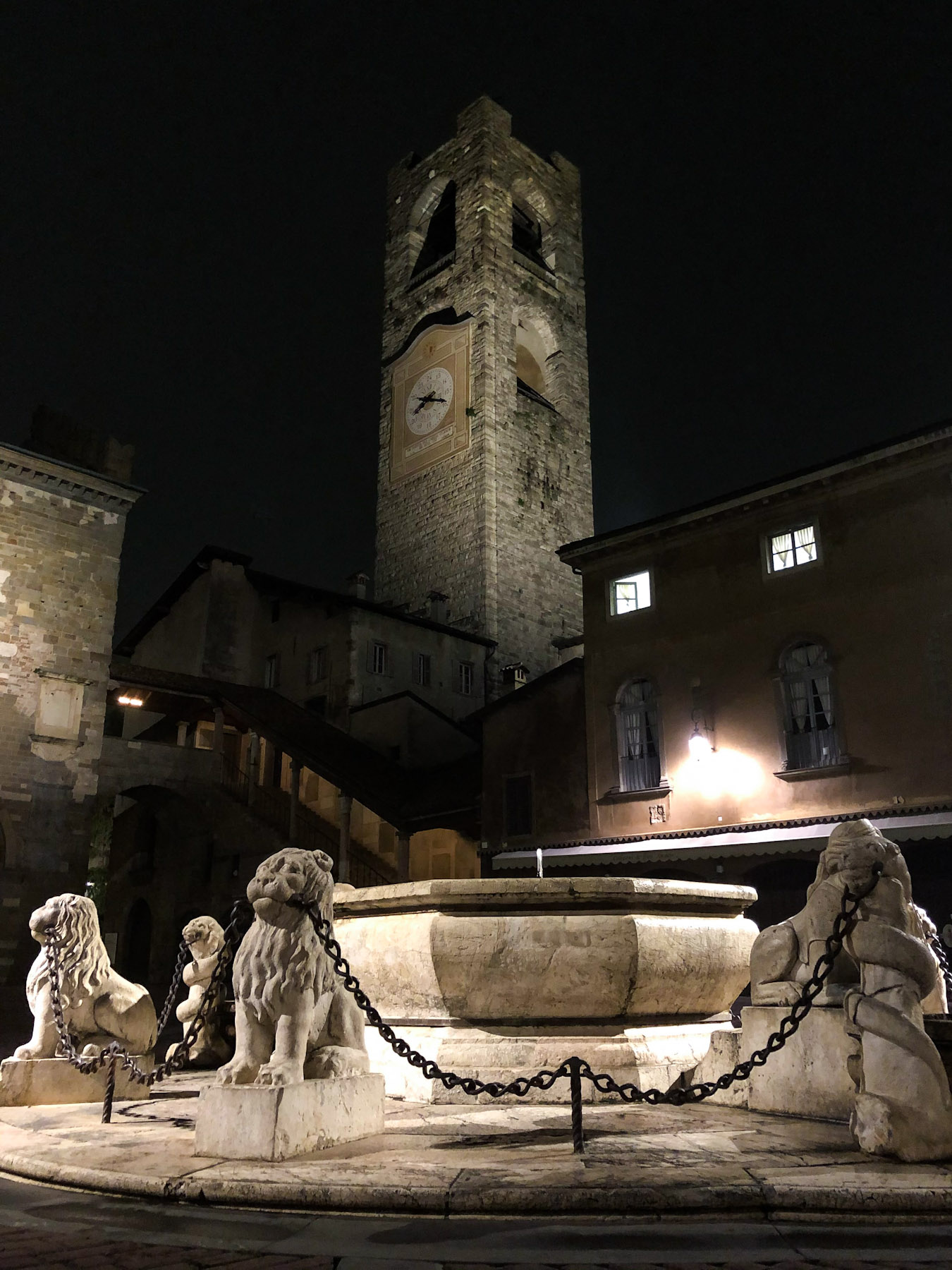 After lunch, I started my descent to Città Bassa by way of the scalette di Bergamo, a series of ancient stairwells that have been used for centuries by the city’s populace. Today, the scalette offer a pedestrian-only scenic route for visitors, while maintaining their popularity with locals. I began by taking the Salita dello Scorlazzone, which originate across the street from Ristorante Baretto. A mule track framed by stone walls concealing grand villas turned into 162 steep stone steps that let out onto Via Sudorno.

After a quick left and right, I continued along the Salita Scorlazzino, a scenic stretch abutting terraced meadows and gardens. Halfway down, a sweeping view appeared of the Roman-style campanile of Tempio dei Caduti (Temple of the Fallen). I finished by scaling the Scaletta delle More, a series of 245 steps that pass through active growing fields and greenhouses. Ahead and to the left were uninterrupted views of Bergamo Alta and the Venetian Walls, set aglow against an immaculate blue sky.

Scaletta delle More terminates in Santa Lucia, a residential neighborhood that reminded me of Los Angeles, with luxury low-rise apartment complexes, palm trees, and quiet, residential streets. I walked a mile along Via dello Statuto to reach the buzzy shopping district of Città Bassa, with a plethora of boutiques, cafes, and gelaterias crammed along Via Sant’Alessandro, Via XX Settembre, and the surrounding streets and alleyways. I stumbled into Hōsio, a local Italian menswear atelier specializing in knits, and bought a beautiful merino wool cardigan with patch pockets and a unique color-blocked pattern in shades of cerulean and emerald. Then I waited on line for 20 minutes at Gelateria La Romana for two scoops of croccante all’amarena – a modern riff on the classic duet of cherry and vanilla.

With a shopping bag in one hand and a cone in the other, I crossed over Viale Roma, Città Bassa’s main thoroughfare, and traipsed along the Quadriportico del Sentierone, a grand arcade lined with upscale boutiques and design studios. To my left stood Bergamo’s world-famous opera house, named for Gaetano Donizetti, a patron son of the city. I continued my leisurely stroll through the medieval lanes and alleyways of Borgo Pignolo, which eventually brought me to Porta Sant’Agostino, one of four entrance gates in the Venetian Walls that surround the Città Alta.

During the reign of the Republic of Venice in the 16th-century, the walls were constructed to enhance the defensive system and protect Bergamo, considered a key asset to La Serenissima. At the time, many believed the walls were built in vain as the city never underwent a siege, but the Bergamaschi of today love their hallowed walls, which were granted UNESCO World Heritage status in 2017.

I followed Viale della Murra, a pedestrian-friendly roadway built atop the walls with a gradual gradient and sweeping panoramic views from every angle. Piattaforma di Sant’Andrea, one of the original fortification platforms, has been converted into a pleasant greenway, with a colonnade of horse chestnut trees providing a shaded canopy for moms pushing strollers and joggers making the four-mile circuit around Bergamo Alta.

I hooked a right at Porta San Giacomo and began to wend my way back to the hotel. Patrician townhomes in shades of umber, ocher, and burnt sienna lined the cobblestone streets. I passed Piazza Vecchia, where my love affair with Bergamo began a year earlier, and continued along Via Colleoni, which deposited me onto Piazza Mascheroni in front of Relais San Lorenzo. I had just completed my own 12-mile circuit of the city — and my love for Bergamo was stronger than ever.