I had planned a day trip to Varese the last time I visited Lake Como in 2018, but with so much to see and do around the lake — not to mention the 90-minute drive it would take to get there — Charles and I never got around to it. Fast forward a year later, I made Varese a top priority on my solo trip to Northern Italy.

Varese is a genteel city of 80,000 in a province that shares the same name, roughly 35 miles north of Milan. While it’s generally considered a bedroom community, the city and surrounding region offer much more than just a convenient place to live for Milanesi commuters. The centro storico is spotless and meticulously restored, with ample dining and shopping options. The Alpine foothills north of the city lend themselves to expansive villas and gardens, several of which have been converted into world-class museums, like Villa Panza. Further north and west lies Campo dei Fiori, an ecological reserve filled with hiking trails, mountains, dry meadows, and chestnut groves. At the foot of the reserve is the picturesque Lake Varese and the Sacro Monte di Varese, a holy pilgrimage site consisting of 14 chapels reachable via a cobblestone incline.

I began my visit to Varese at Villa Panza, an 18th-century estate that houses a 20th-century art collection. The villa’s most recent proprietor, Count Giuseppe Panza, amassed a collection of over 150 pieces by contemporary American artists. In 1996, the villa and its art collection were bequeathed by the Panza family to the FAI, Italy’s national trust, and in 2000, the trust opened the villa to the public as a museum.

Upon entering the Neoclassical estate, it appeared I had the whole museum to myself. Long Light, a temporary exhibition dedicated to the works of Irish American artist Sean Scully, was on display throughout the villa. Much of Scully’s art consists of acrylics on canvas featuring intricate patterns of lines mixed with bold colors. His style felt reminiscent of Mark Rothko’s mastery of color and Frank Stella’s abstract minimalism.

One of the docents instructed me to start on the second floor and end in the stables. In addition to Scully’s canvases, Renaissance furniture along with African and pre-Columbian artifacts were dispersed throughout the villa. Most of the rooms overlooked the formal gardens, and some had views of the snow-capped Alps in the near distance. On the ground floor, I was particularly taken by the Empire Room, an immense dining salon in hues of robin’s egg and goldenrod with beautifully patterned friezes and three dazzling crystal chandeliers.

Eventually I made my way over to the stables, an elongated L-shaped extension off the main house. This area of the villa was well-regarded by Count Panza for its transcendent light, so much so that he commissioned site-specific works by three American masters of light — Dan Flavin, James Turrell, and Robert Irwin — which are permanently on exhibition. Flavin produced numerous sculptural pieces in his signature style of fluorescent tubes, one of which extends the entire length of the inner stable corridor. The works of Turrell and Irwin are integrated into the architectural designs of several barren white rooms located at the far end of the stables. It was a glorious sun-filled day, and I was thrilled to be able to experience these pieces just as Count Panza had intended.

I then took a stroll through the English-style gardens, which surround the villa and span across the butte of an eight-acre hill overlooking the rooftops and spires of Varese’s centro storico. There are water features and playful sculptures sprinkled throughout the grounds. Directly in front of the villa are the classical Italian gardens, separated from the English gardens by a massive hedge of ancient boxwood with an enchanted tunnel carved through the middle.

Villa Panza has an on-site restaurant and cafe, but I decided to head into downtown Varese for lunch. After a quick five-minute drive, I parked at city hall and walked into town. The north-south Corso Giacomo Matteotti spans the entire length of the centro storico and is brimming with upscale boutiques catering to the local population. A few blocks over is the 16th-century Baroque Basilica di San Vittore Martire with an imposing campanile, surrounded by charming vicoli lined with bars, enotecas, and cafes. I popped into Cyclery, a paninoteca with outdoor seating on a piazza behind the church. The menu was extensive, but I narrowed in on a panino with prosciutto di San Daniele, dried figs, toasted almonds, and squacquerone, a creamy and tangy cow’s milk cheese produced in Emilia Romagna. The beautiful weather paired nicely with my delectable pranzo.

A walked around for a bit before making my way back to the car and heading to my last stop of the day: Sacro Monte di Varese. A 15-minute drive through winding forested roads studded with lavish estates led me to a parking lot at the foot of the sacred mount. Starting at Prima Cappella, the first chapel, the cobblestone Via del Santuario weaves its way to the top of Monte Velate, where the aerie-like village of Santa Maria del Monte is perched 2,800 feet above sea level. Along the devotional route are 14 uniquely designed chapels, each dedicated to the Mysteries of the Rosary. The site was constructed between 1604 and 1627 and designed by Giuseppe Bernascone, best known for his gift of blending architectural elements with nature; the sacro monte was his magnum opus.

Immediately upon entering the Primo Arco del Rosario, the first arch marking the starting point of Via del Santuario, a steep gradient ascends. As the route continues upward, it makes several precipitous switchbacks, with a chapel or an ornamental archway tucked into the nook of each bend. There were a lot of people on the trail, many of whom appeared to be locals in workout gear getting their cardio in for the day. I reached Santa Maria del Monte about an hour later. The scene from the top was breathtaking, with sweeping views of the Lombardian plain, the Prealpine foothills to the north and east, and the crystalline waters of Lakes Varese and Maggiore. I could even make out the cityscape of Milan on the distant horizon.

It was the golden hour, and the sun was about to launch into a dramatic exit to the west. I began my descent of Via del Santuario, taking a shortcut that bypassed a very long switchback. I was back in my car 20 minutes later and on the road, bound for Lake Como. At one point I glanced in my rear view mirror and saw a magical sight: the sun, nearing the horizon, illuminated the whites of the snow-capped Alps in neon shades of purple and orange—very much like the fluorescent Dan Flavin works I had seen earlier that day. It was an apropos ending to another stellar day of solo travel. 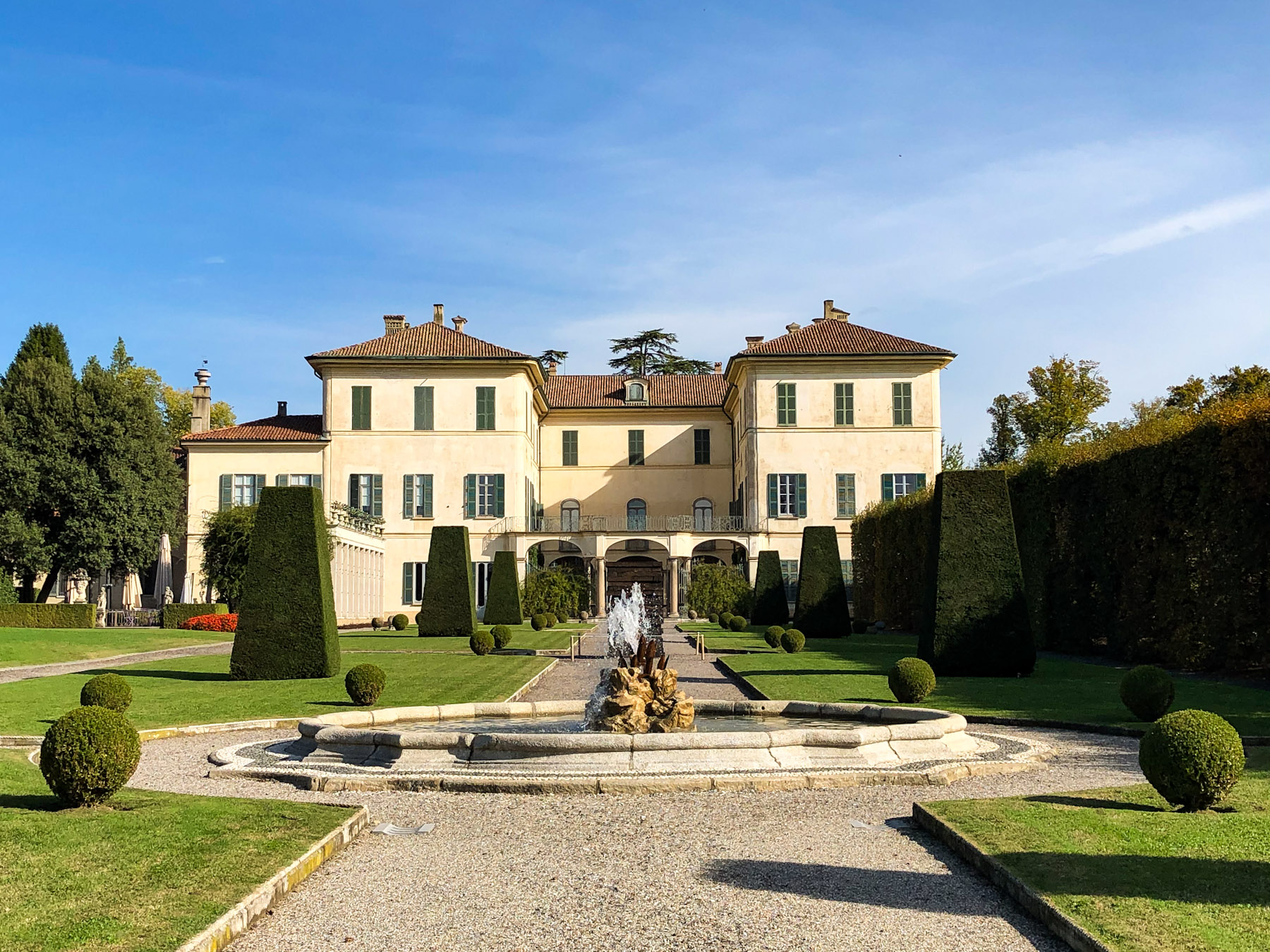 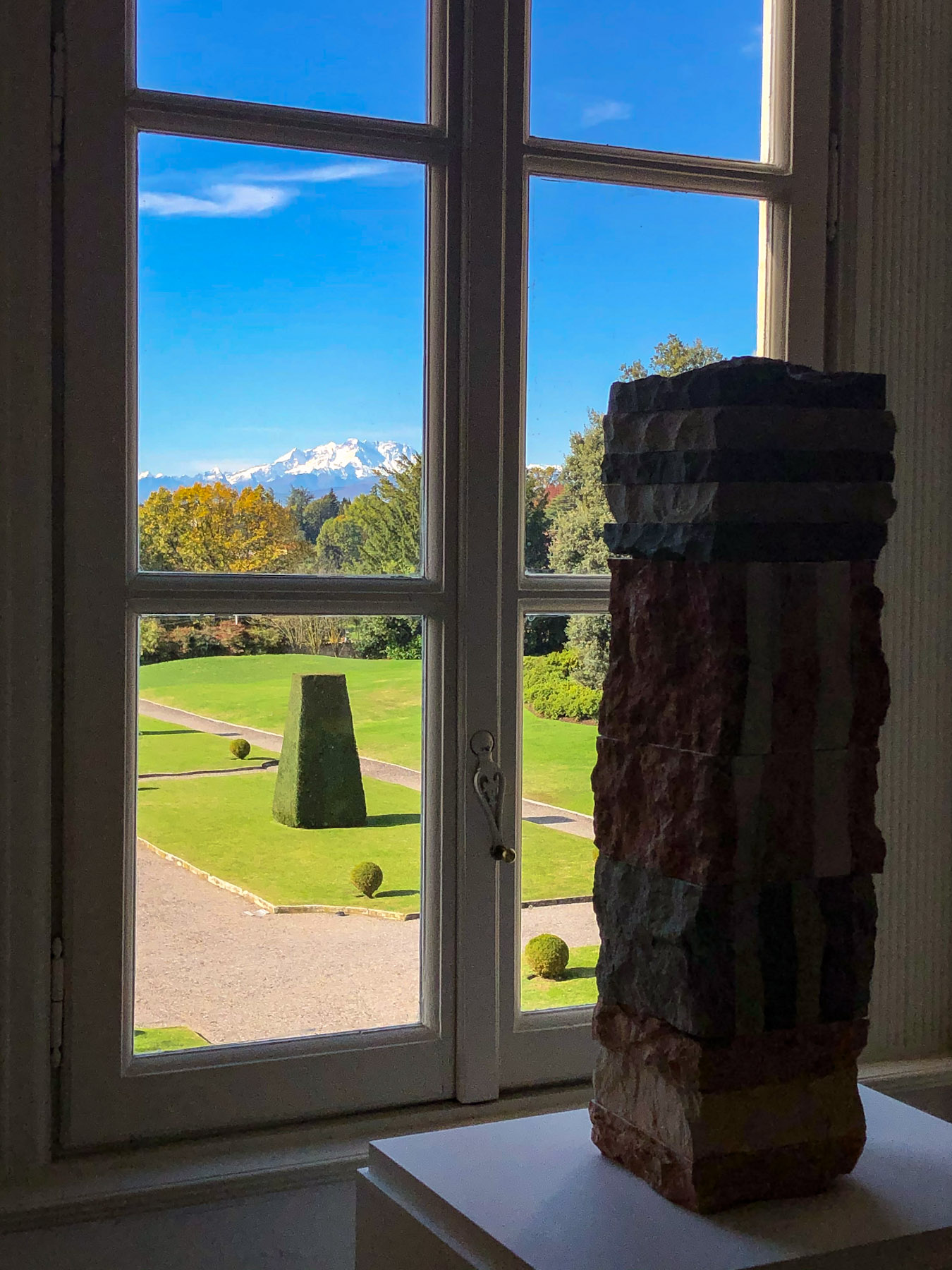 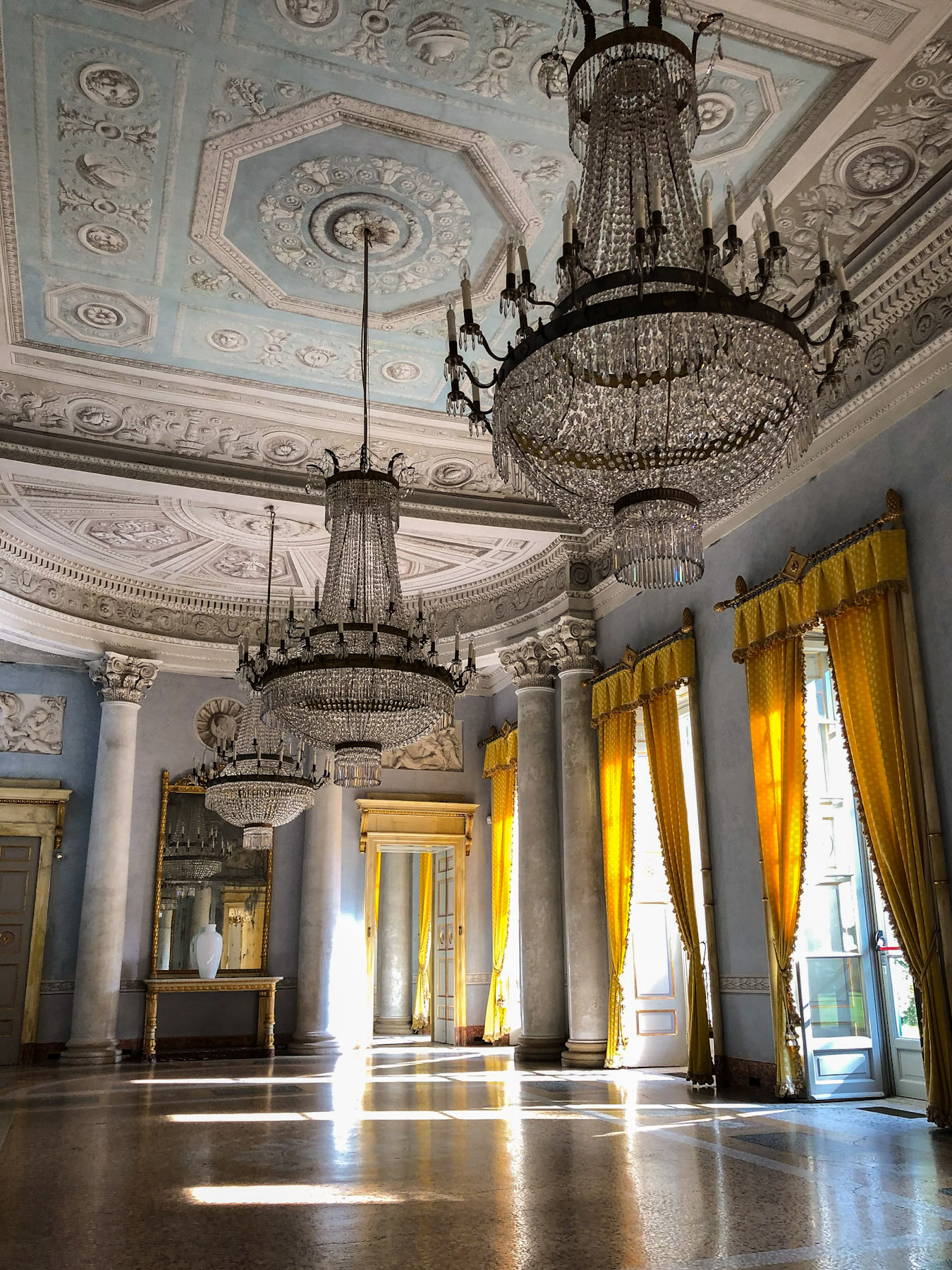 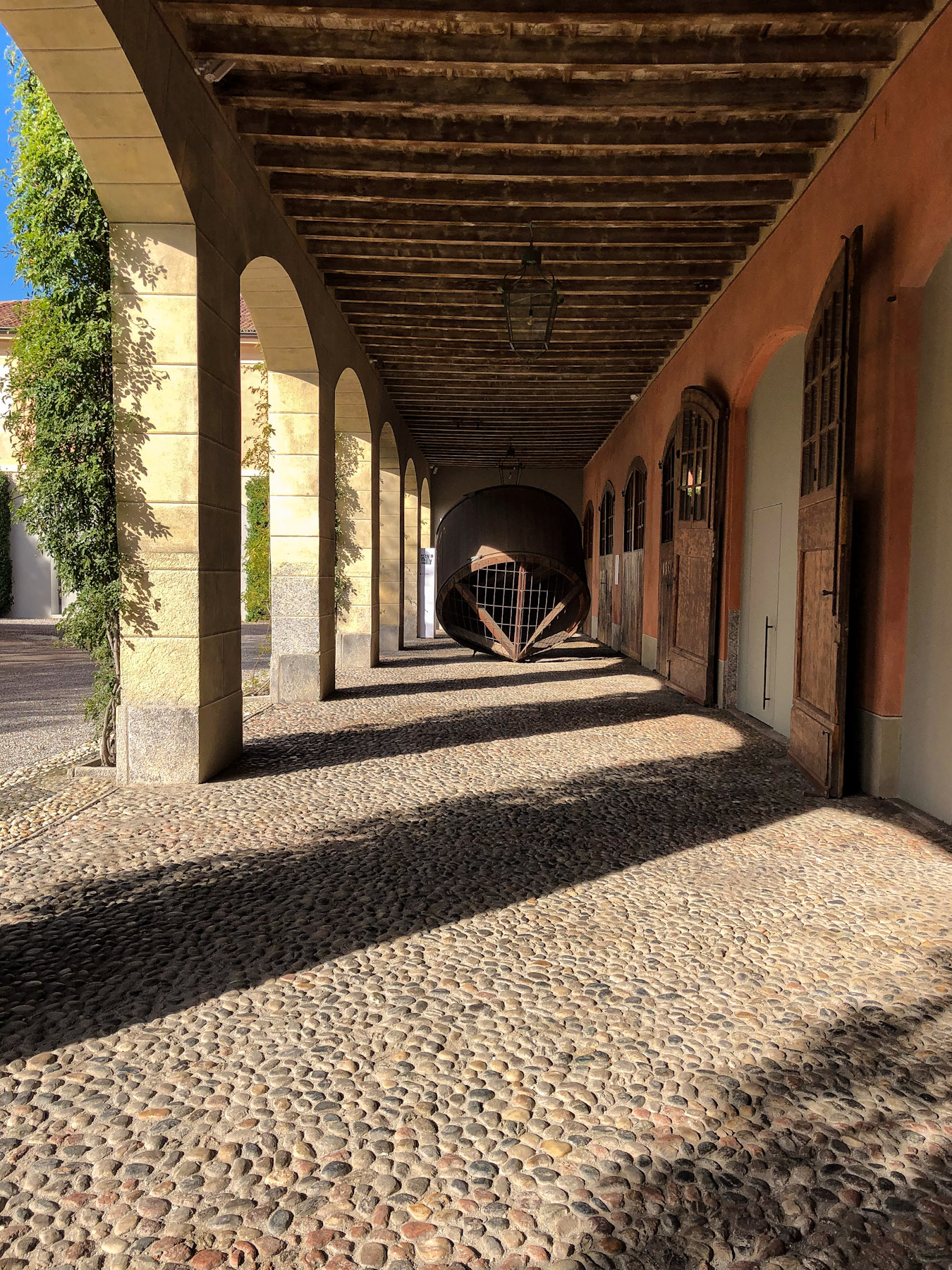 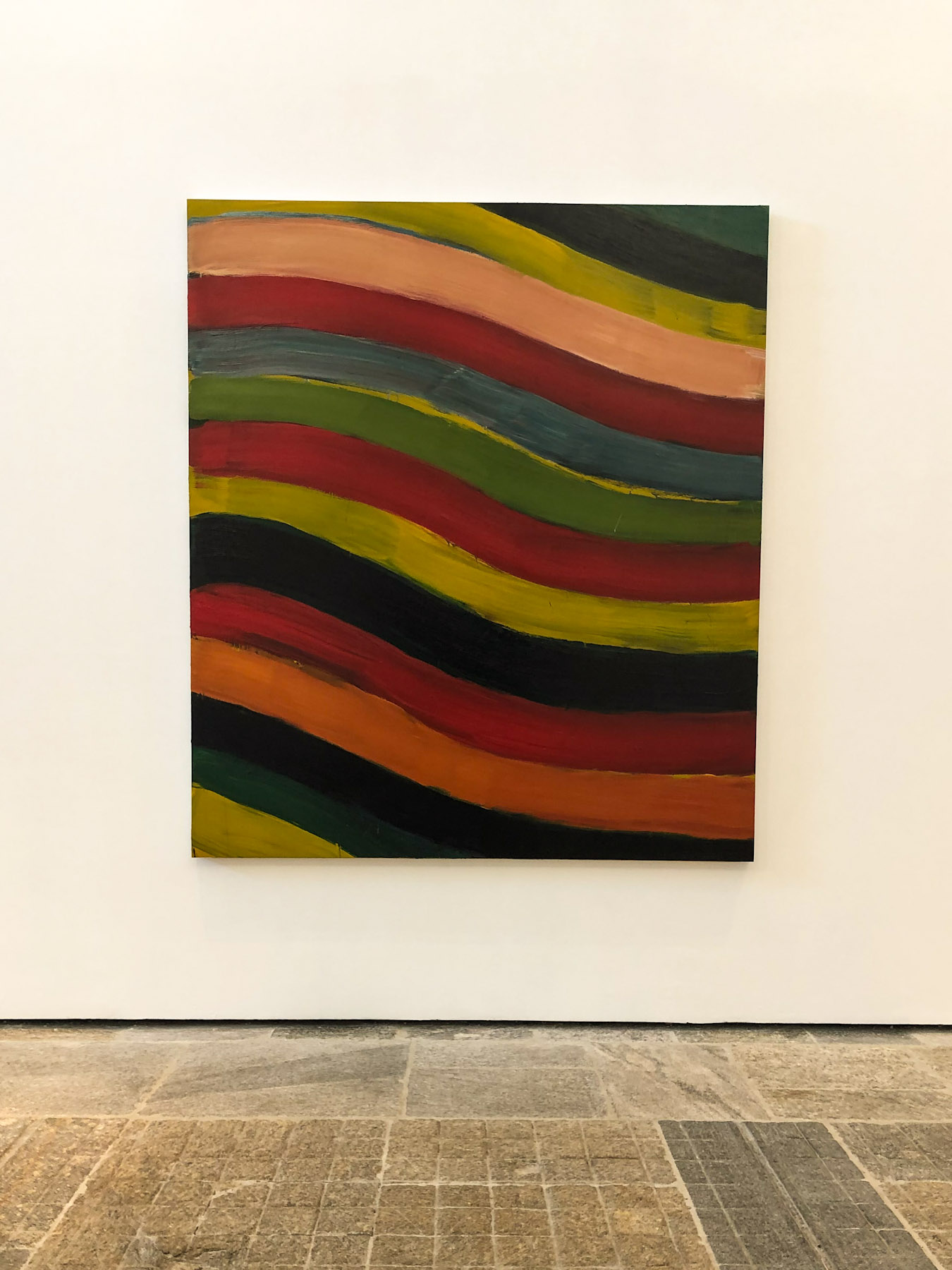 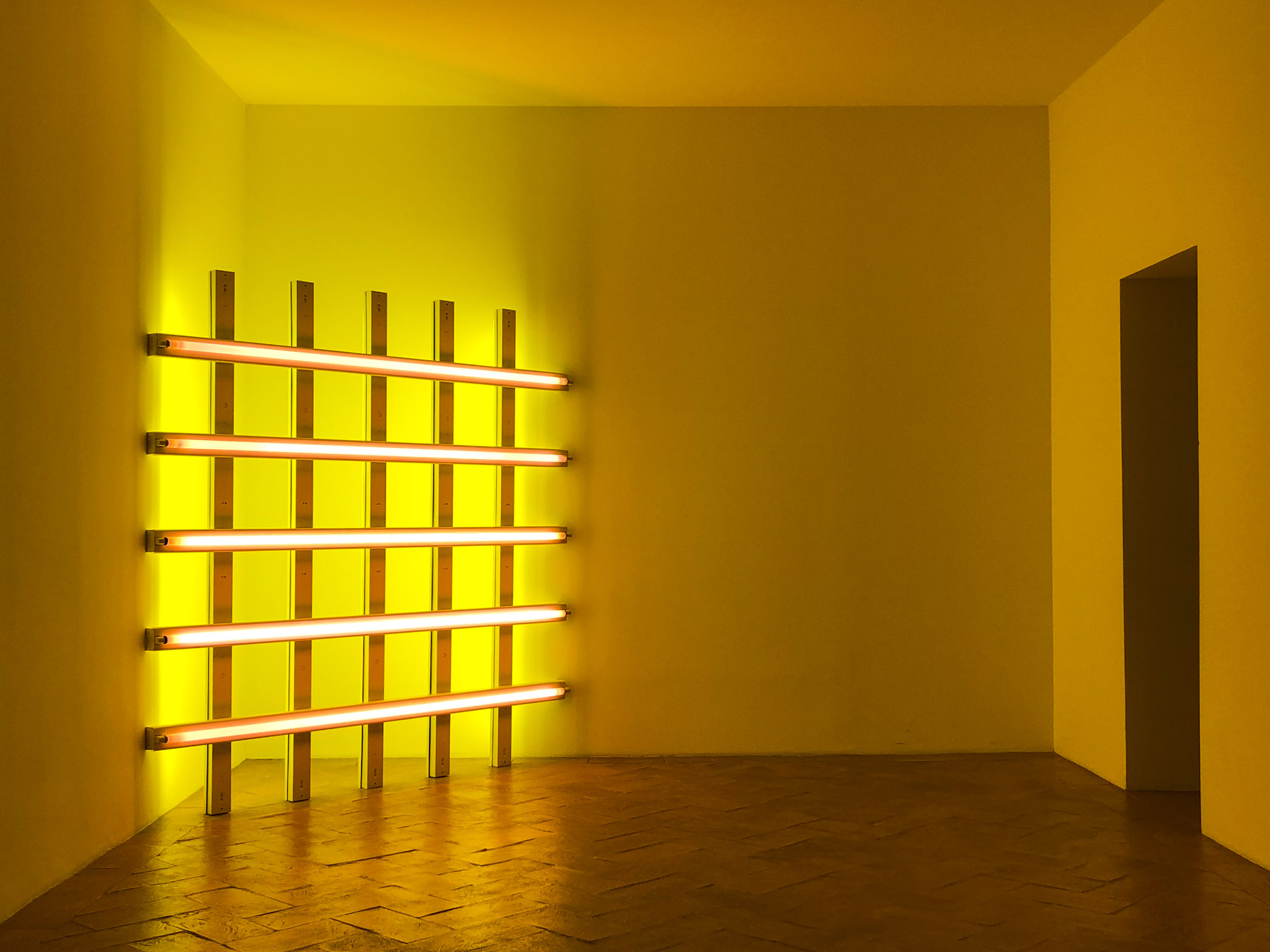 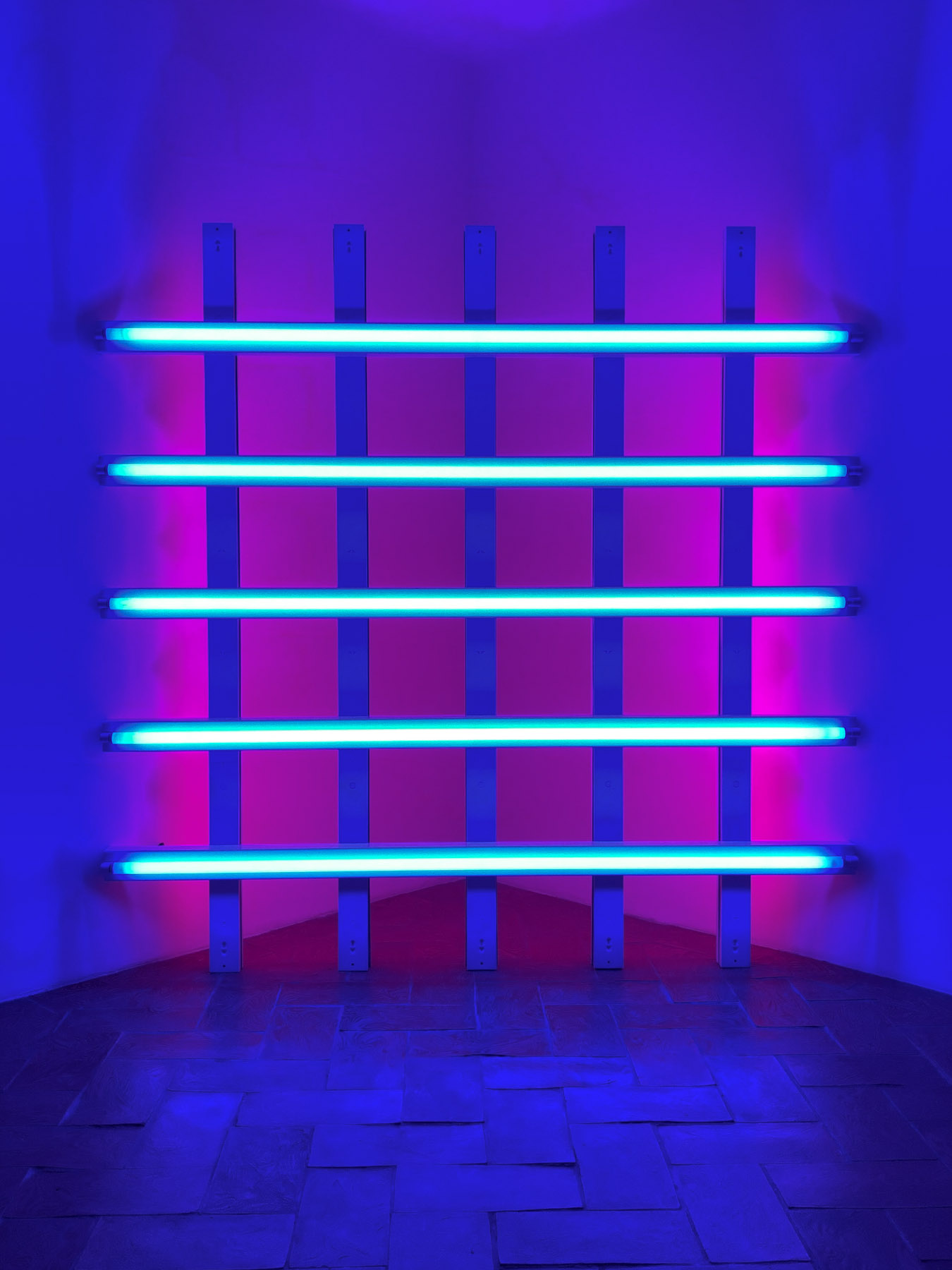 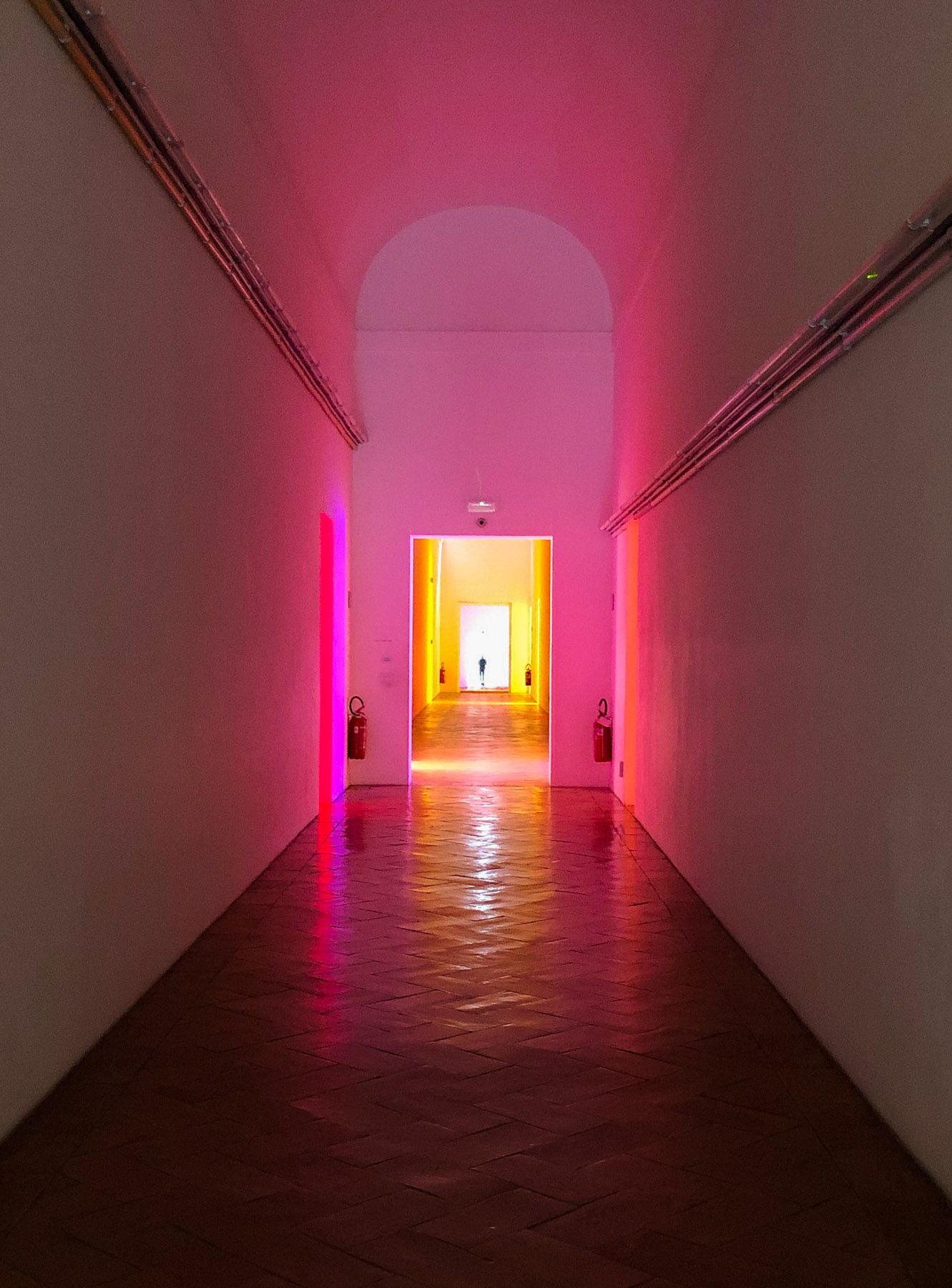 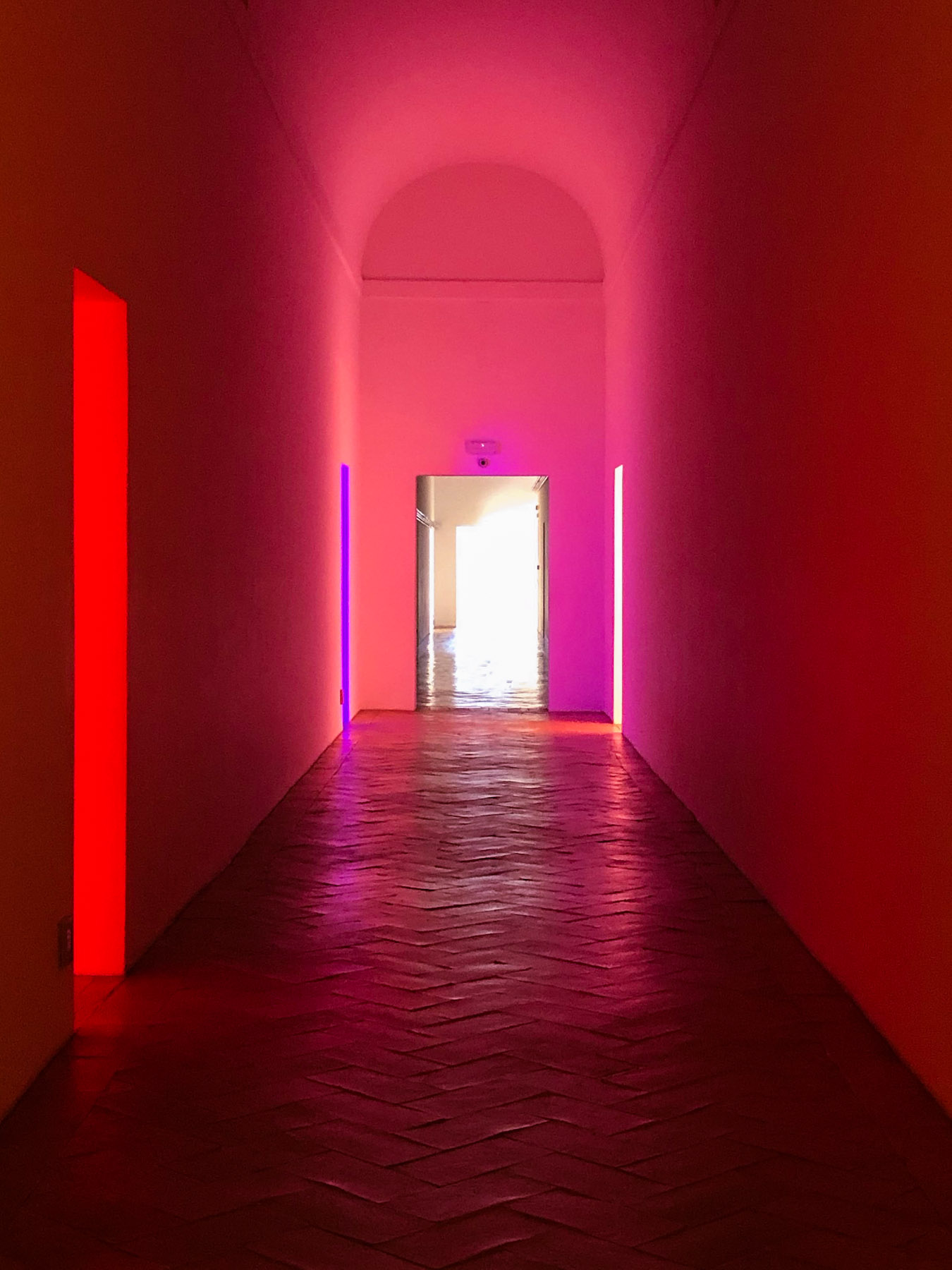 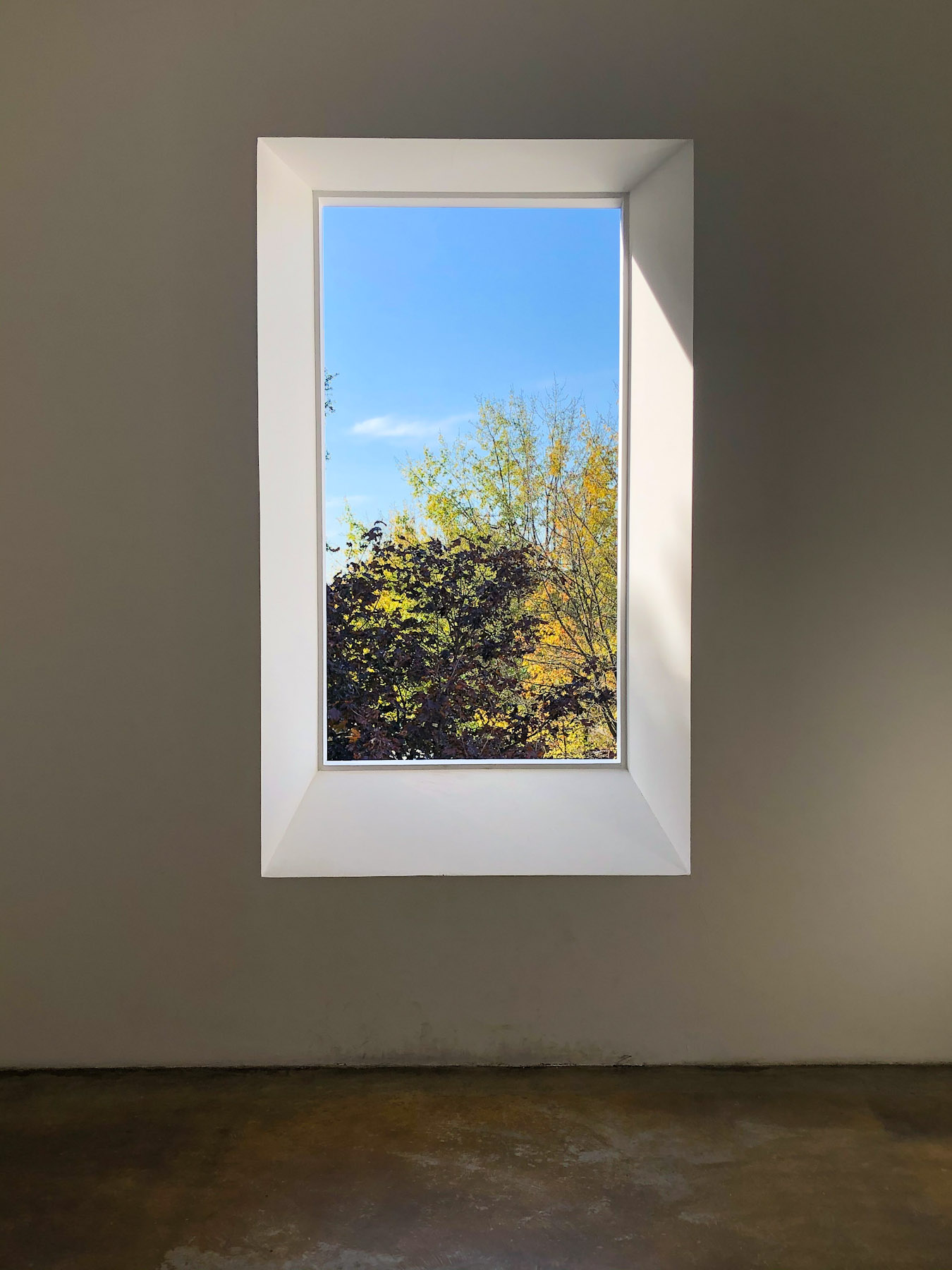 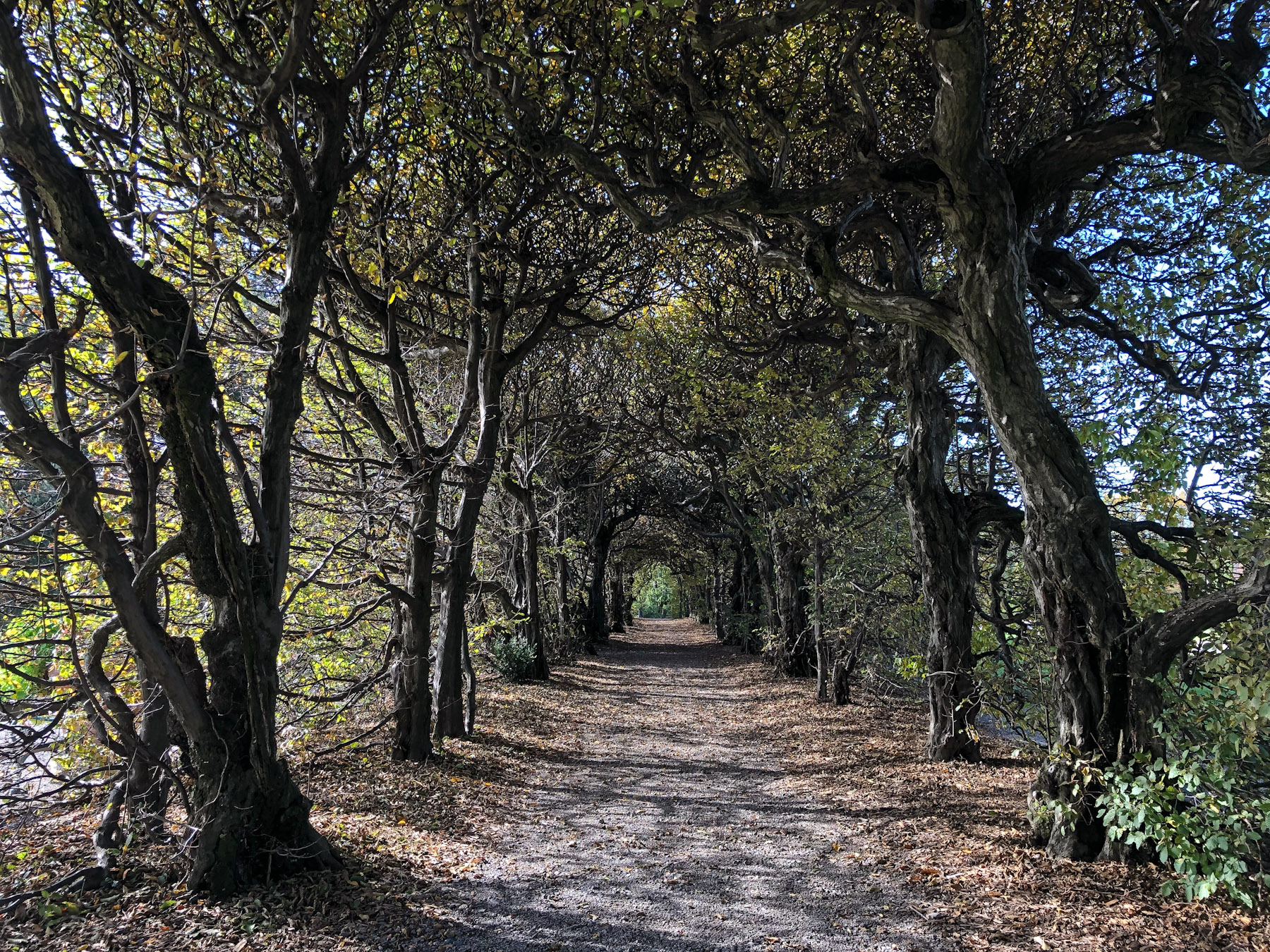 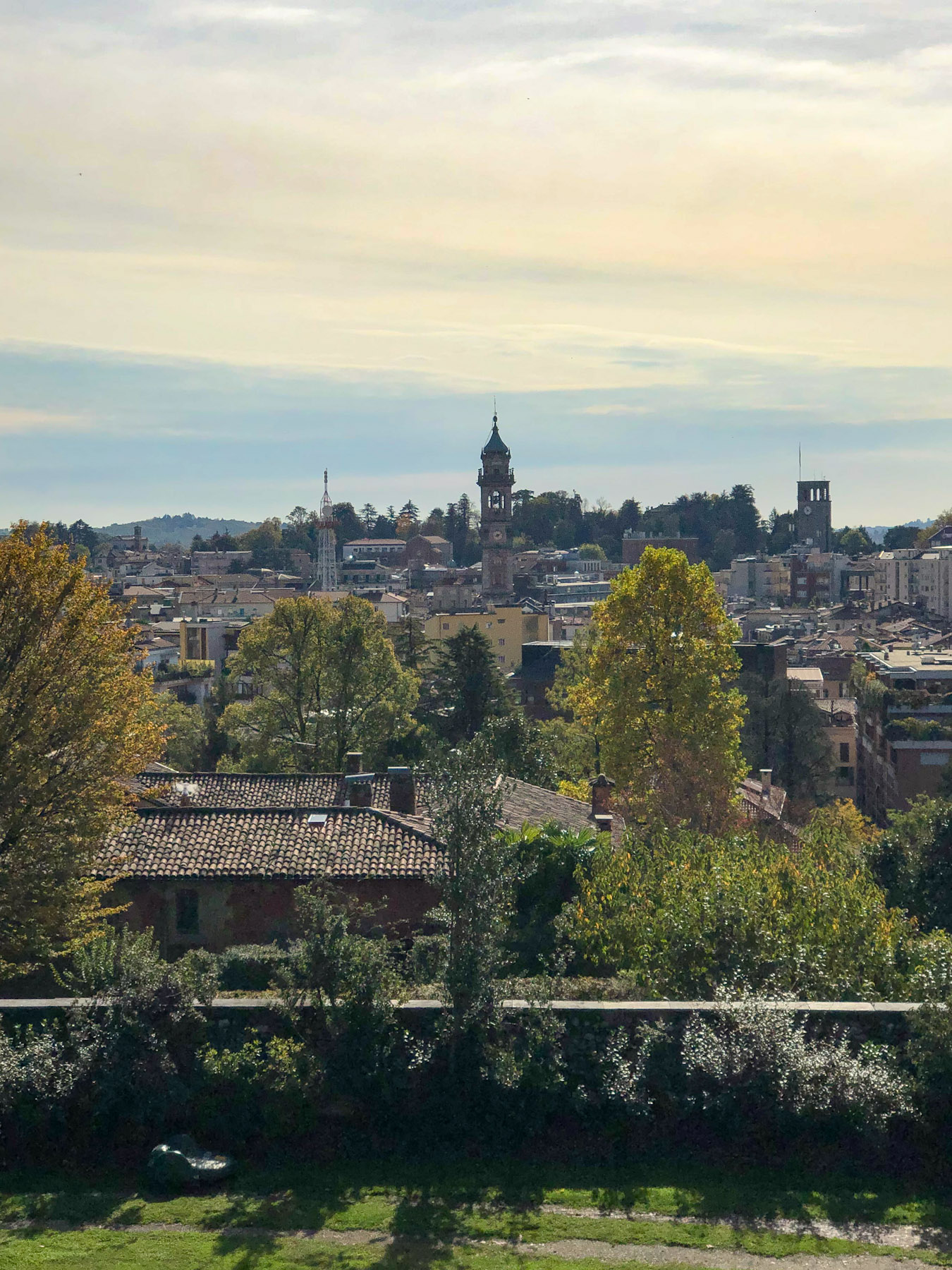 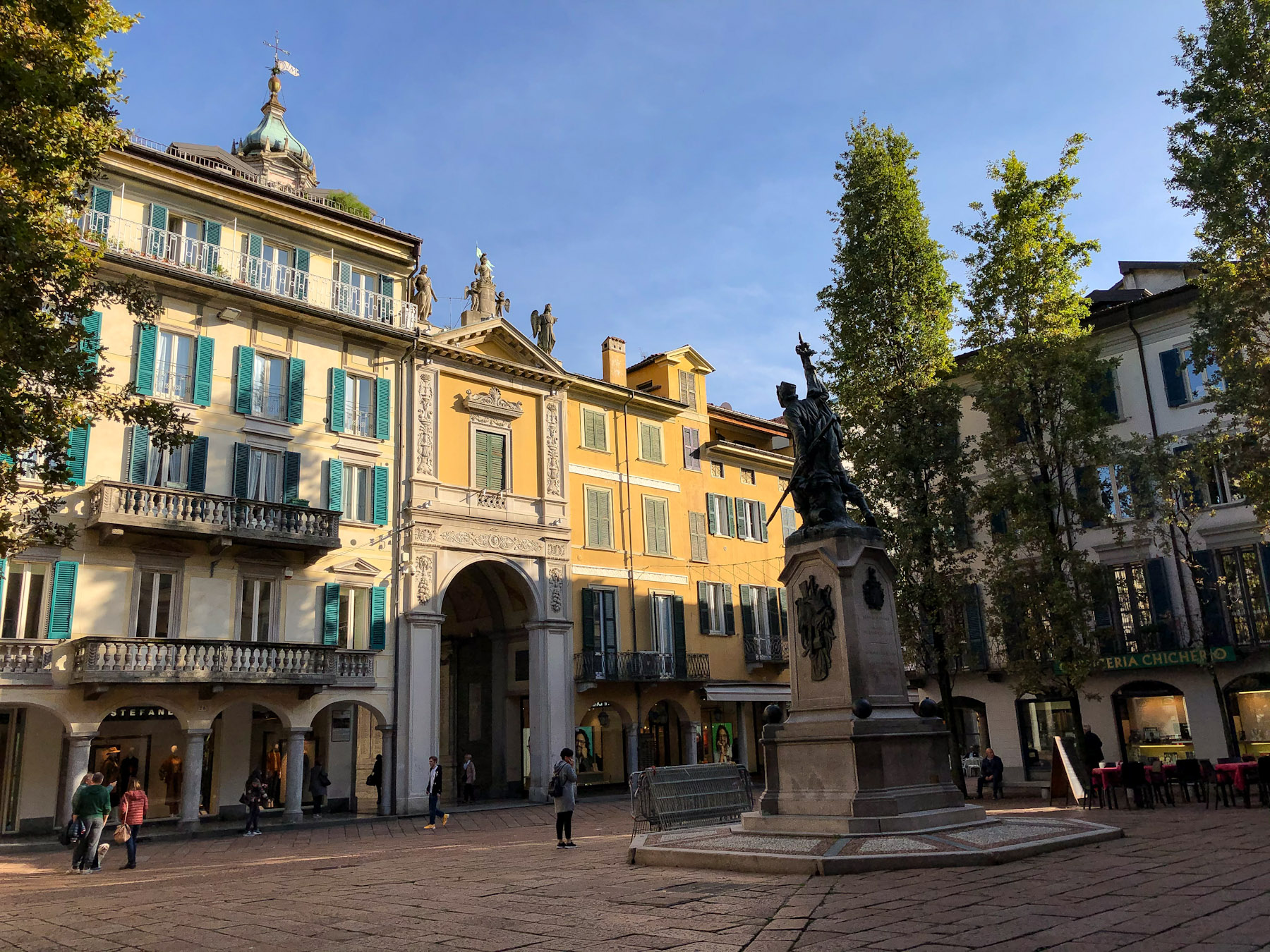 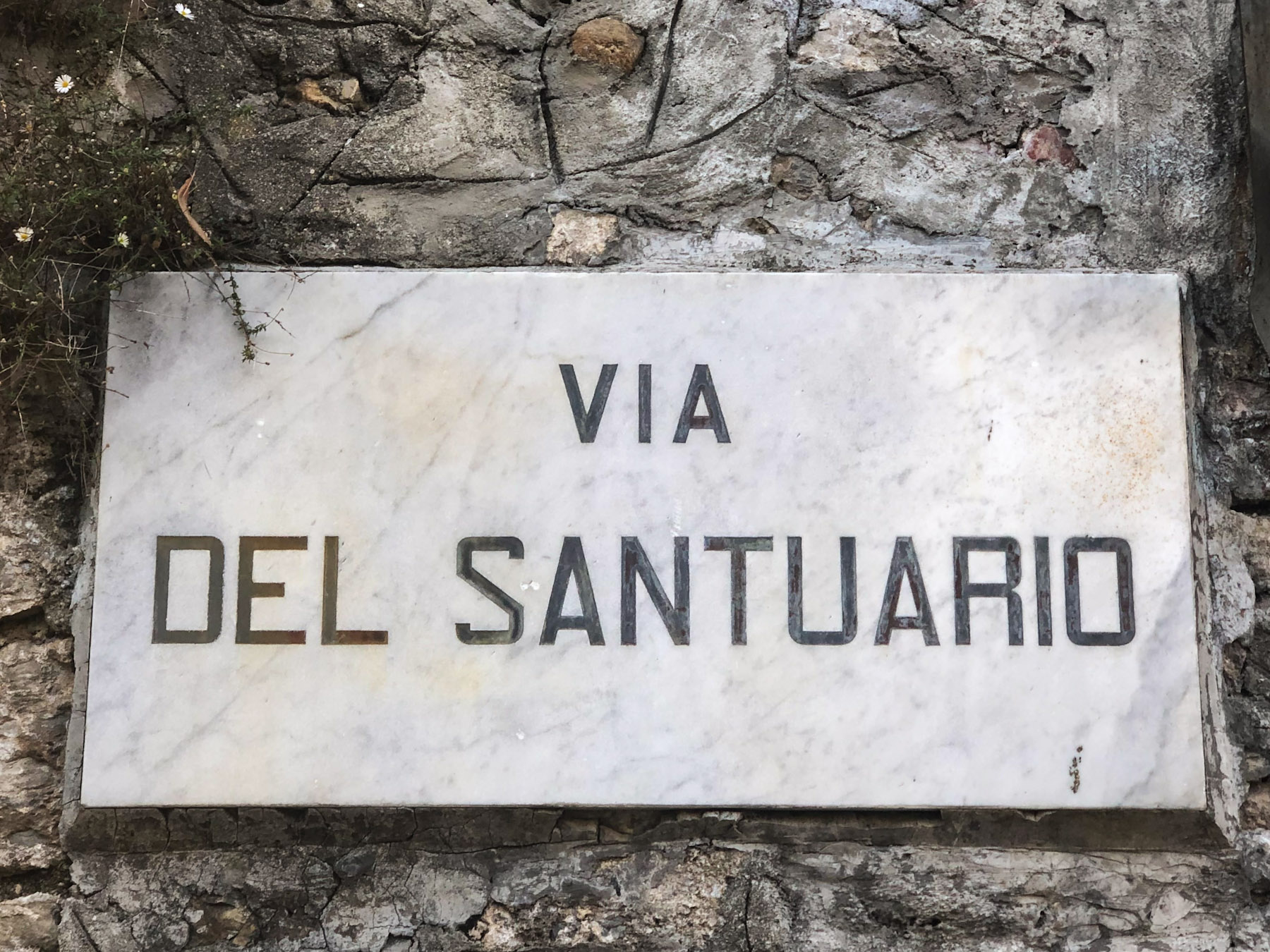 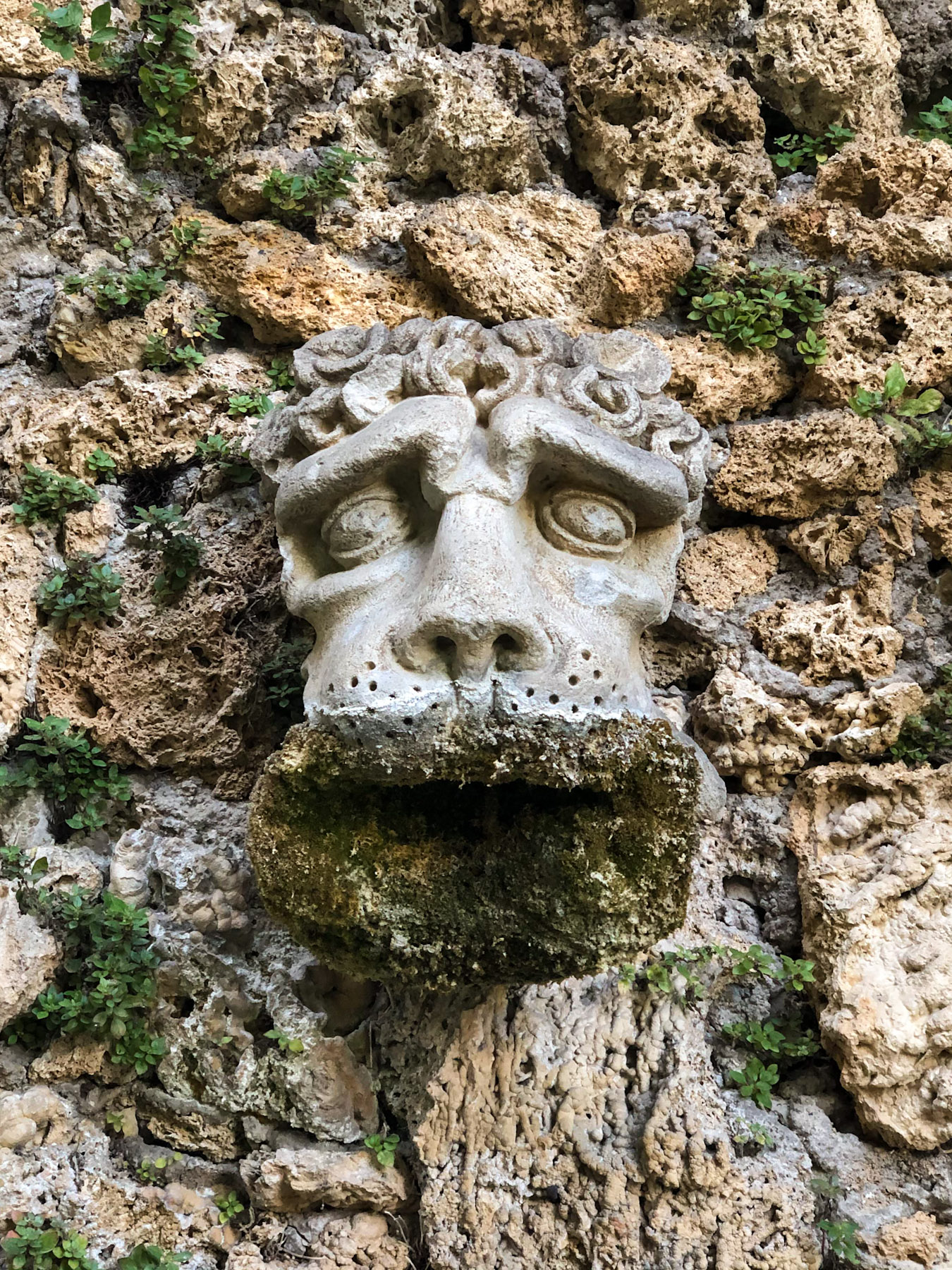 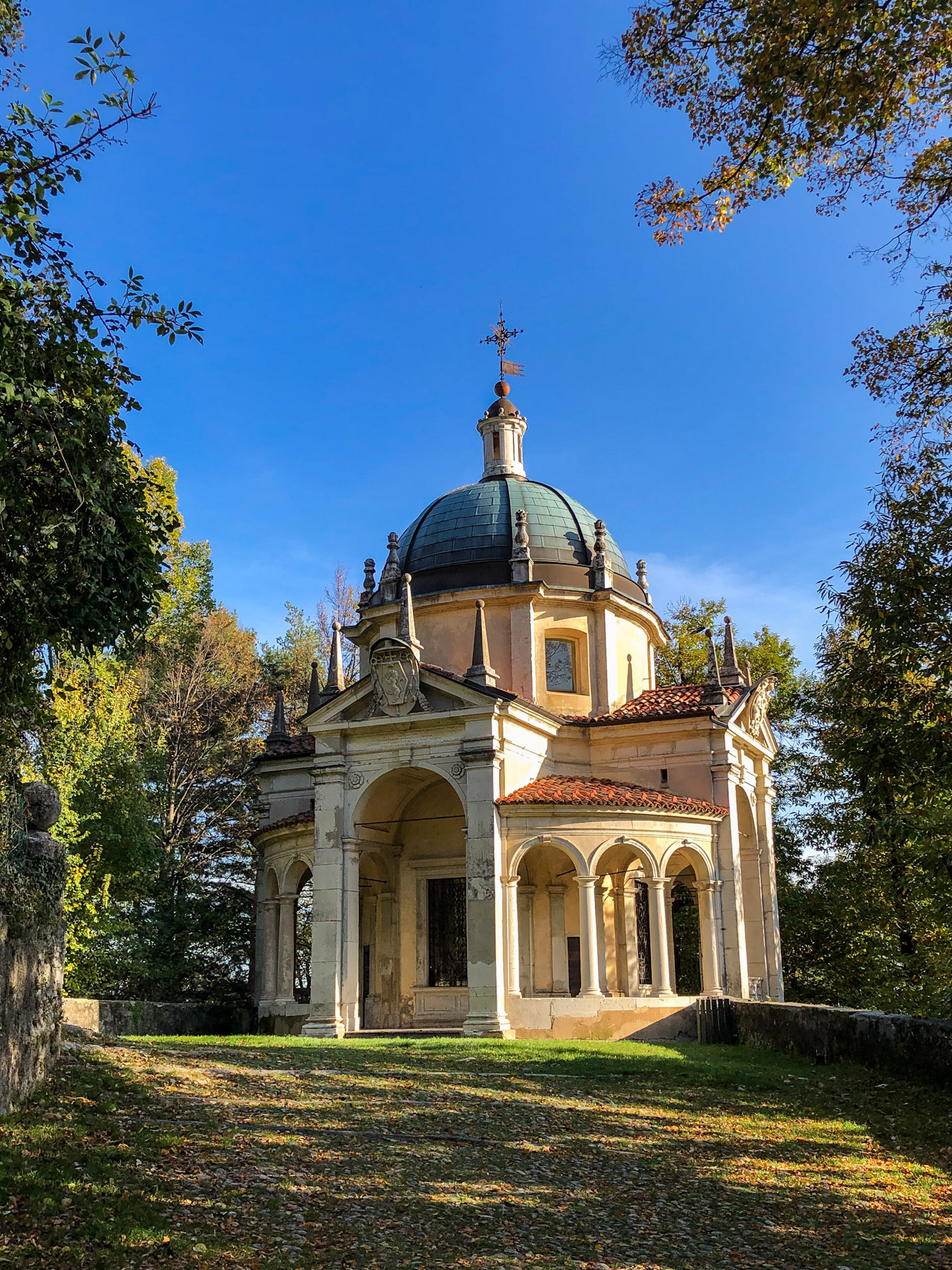 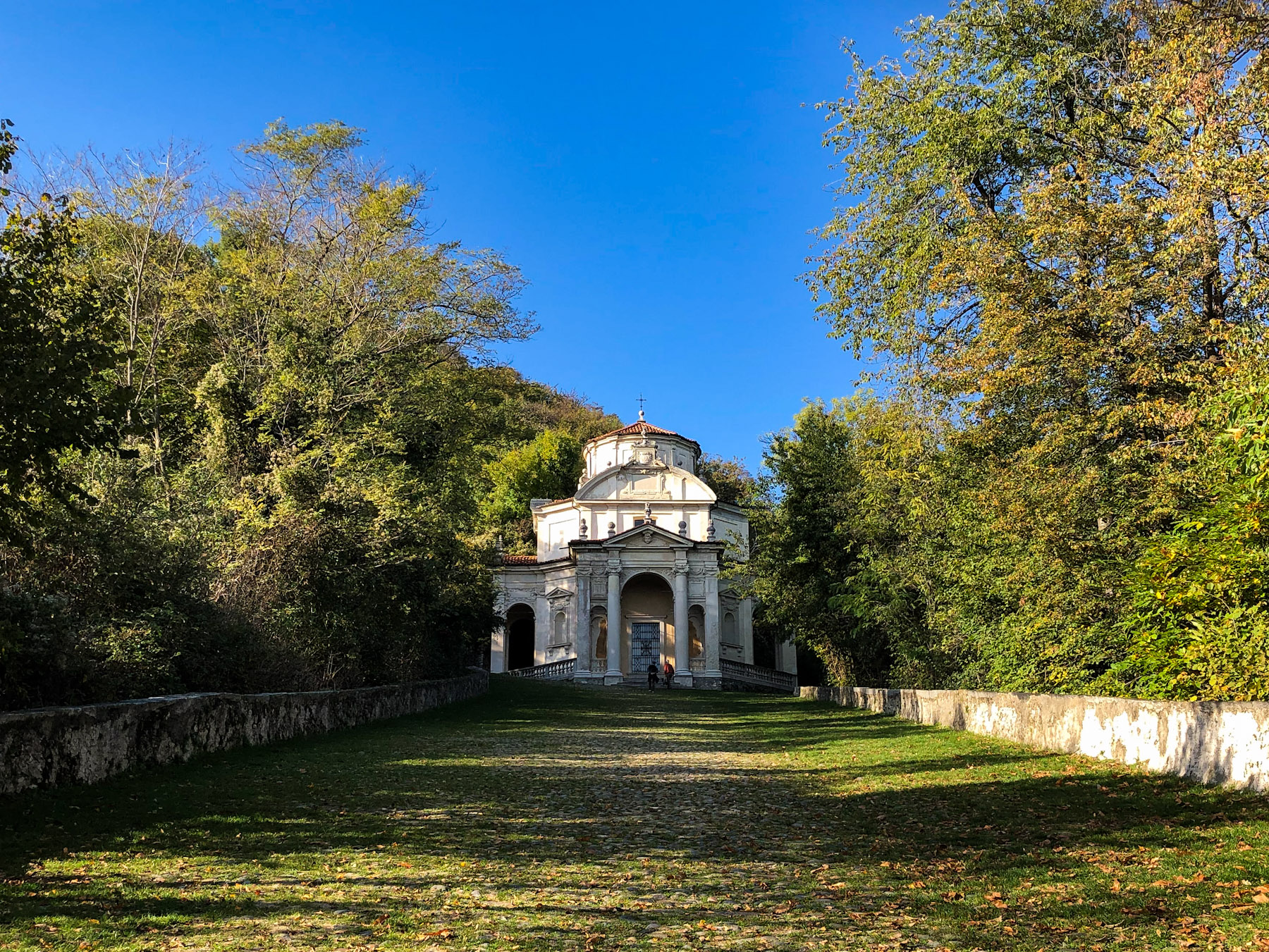 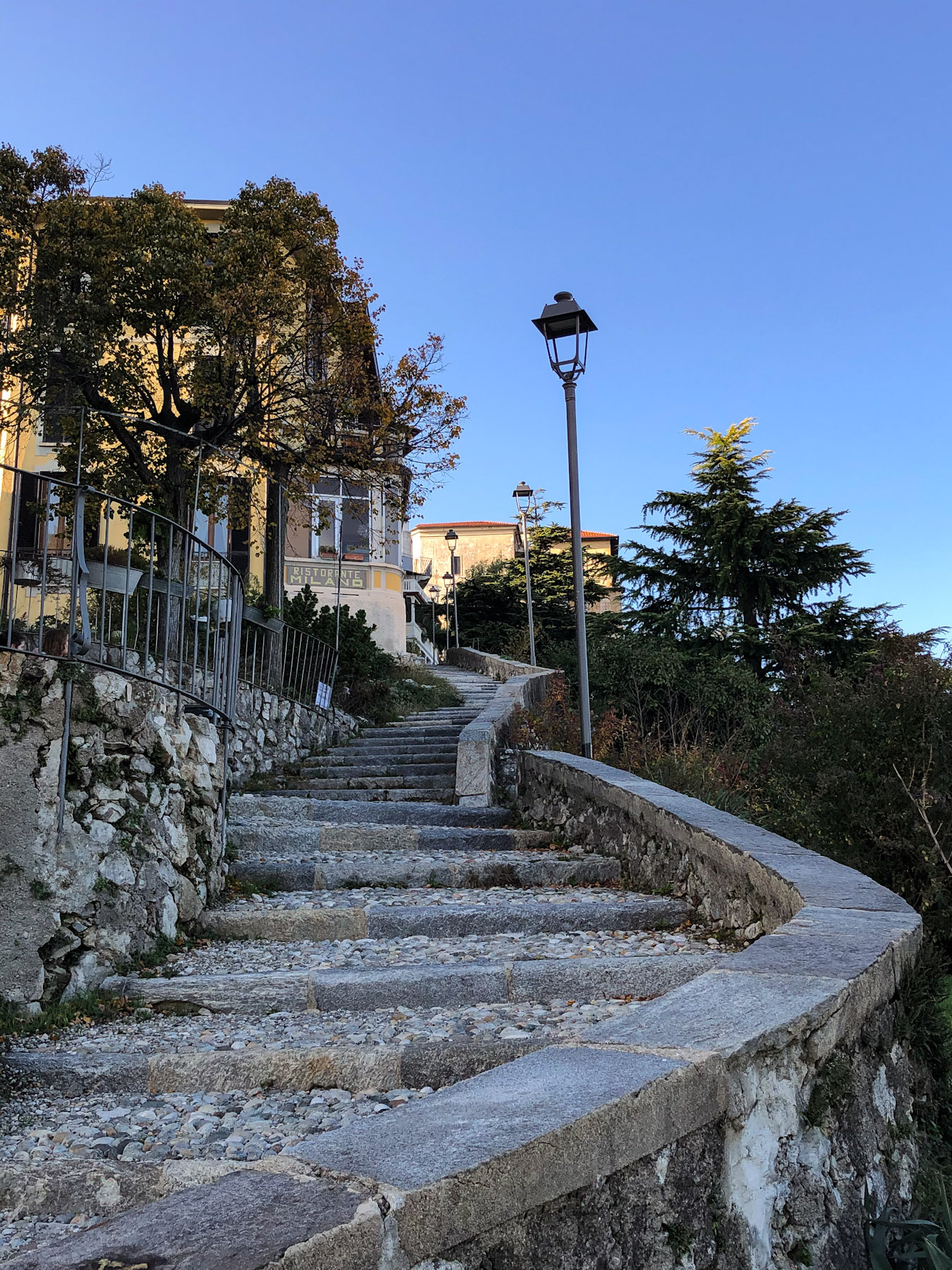 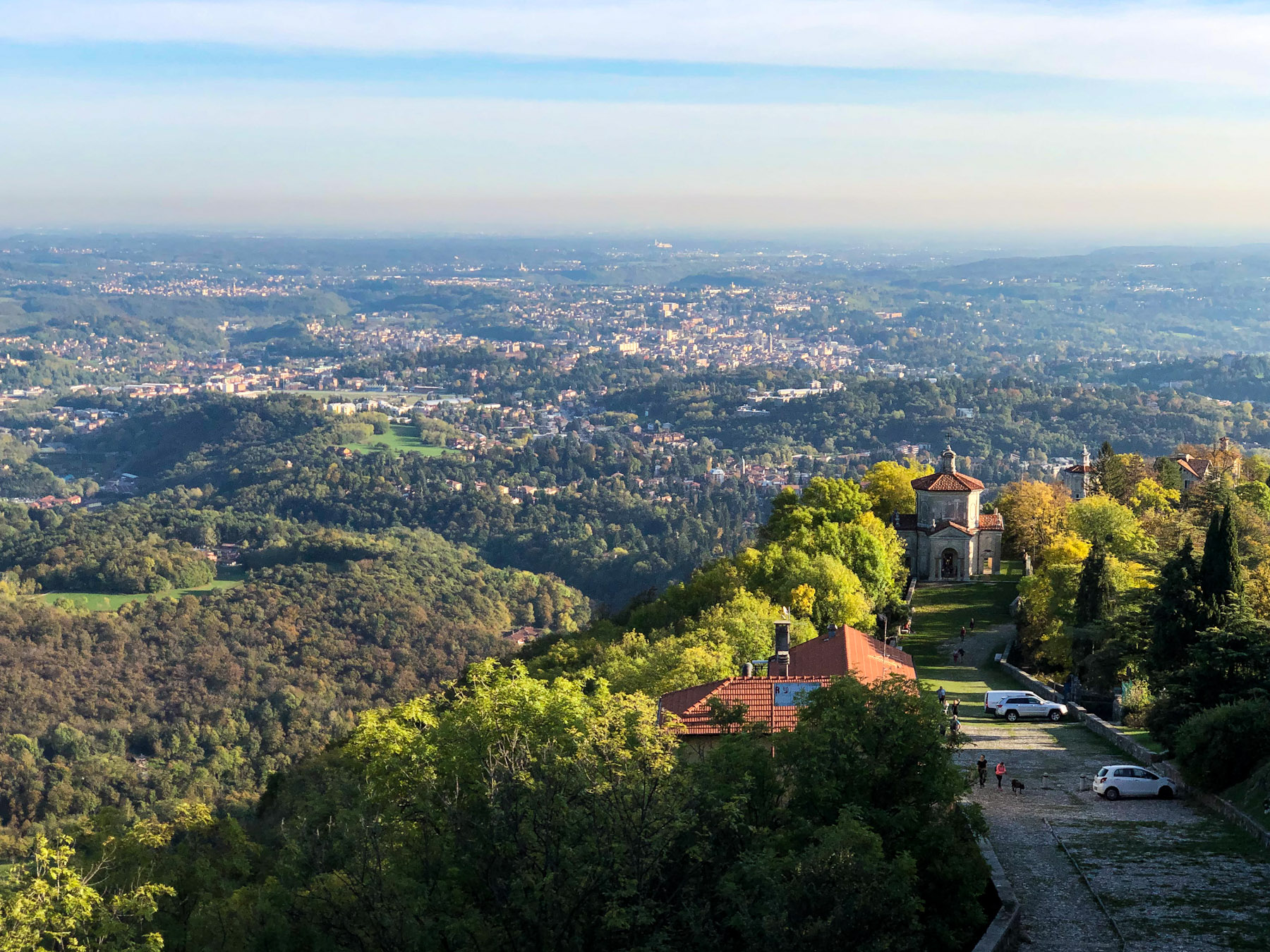 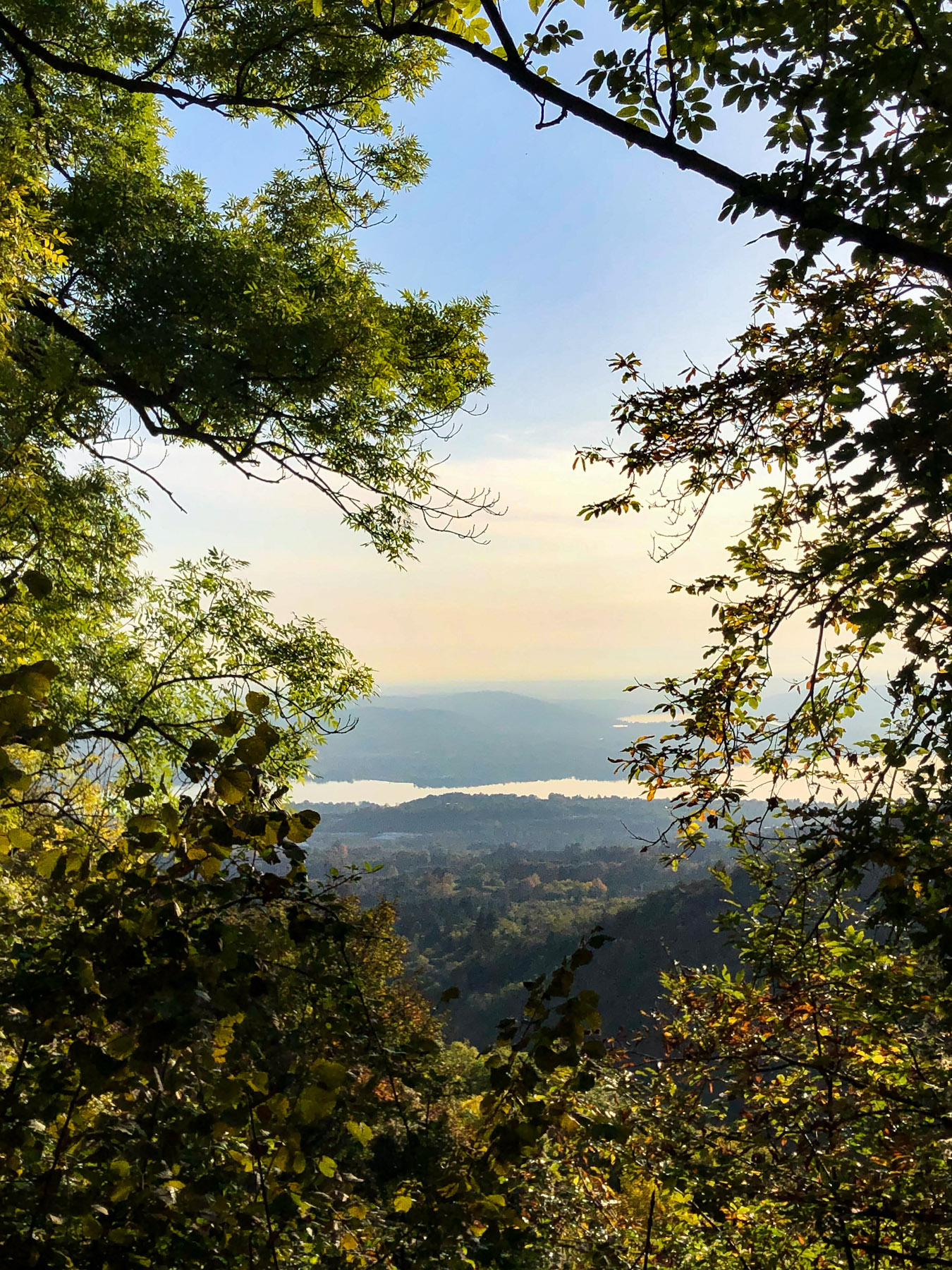 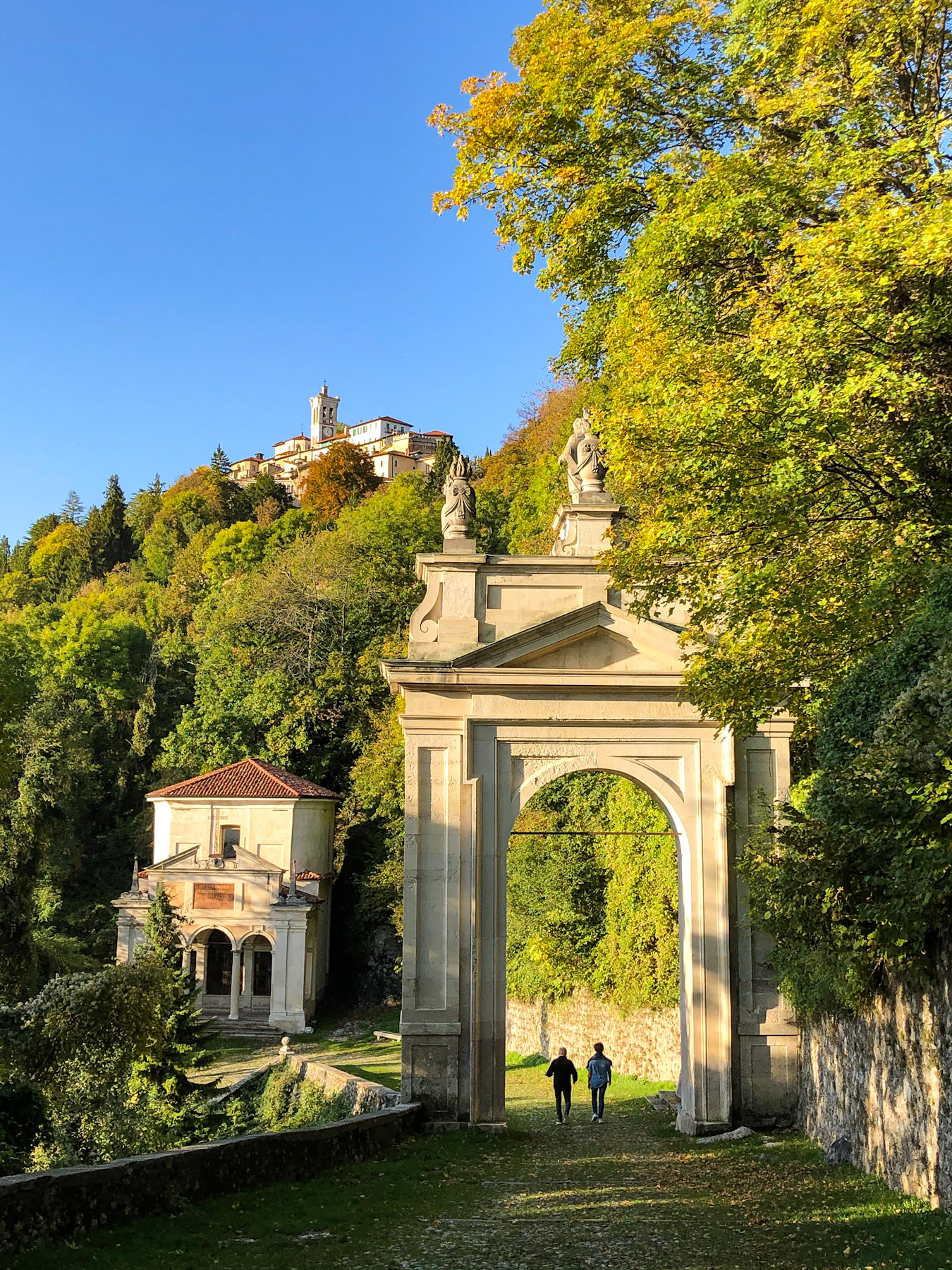 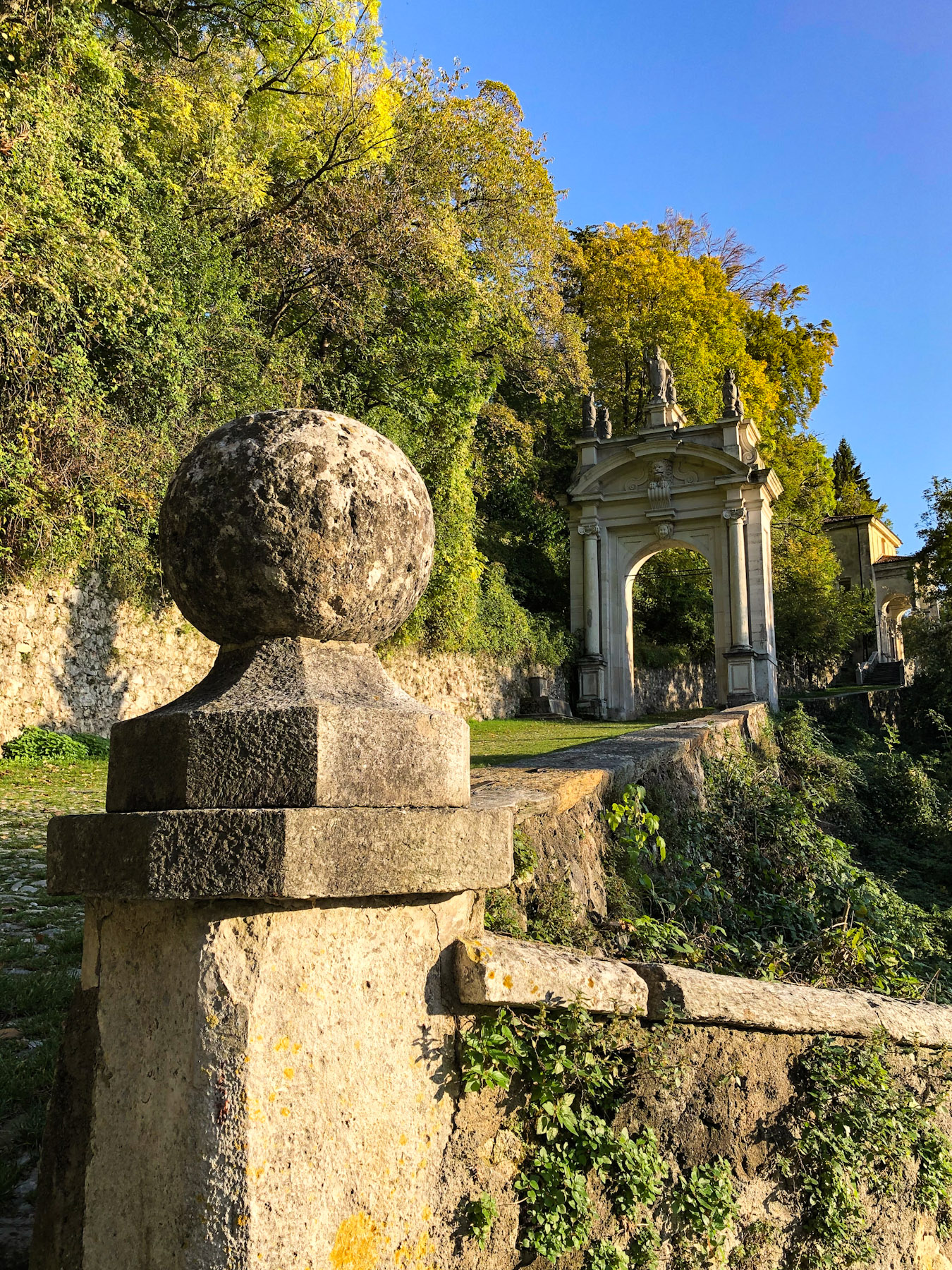 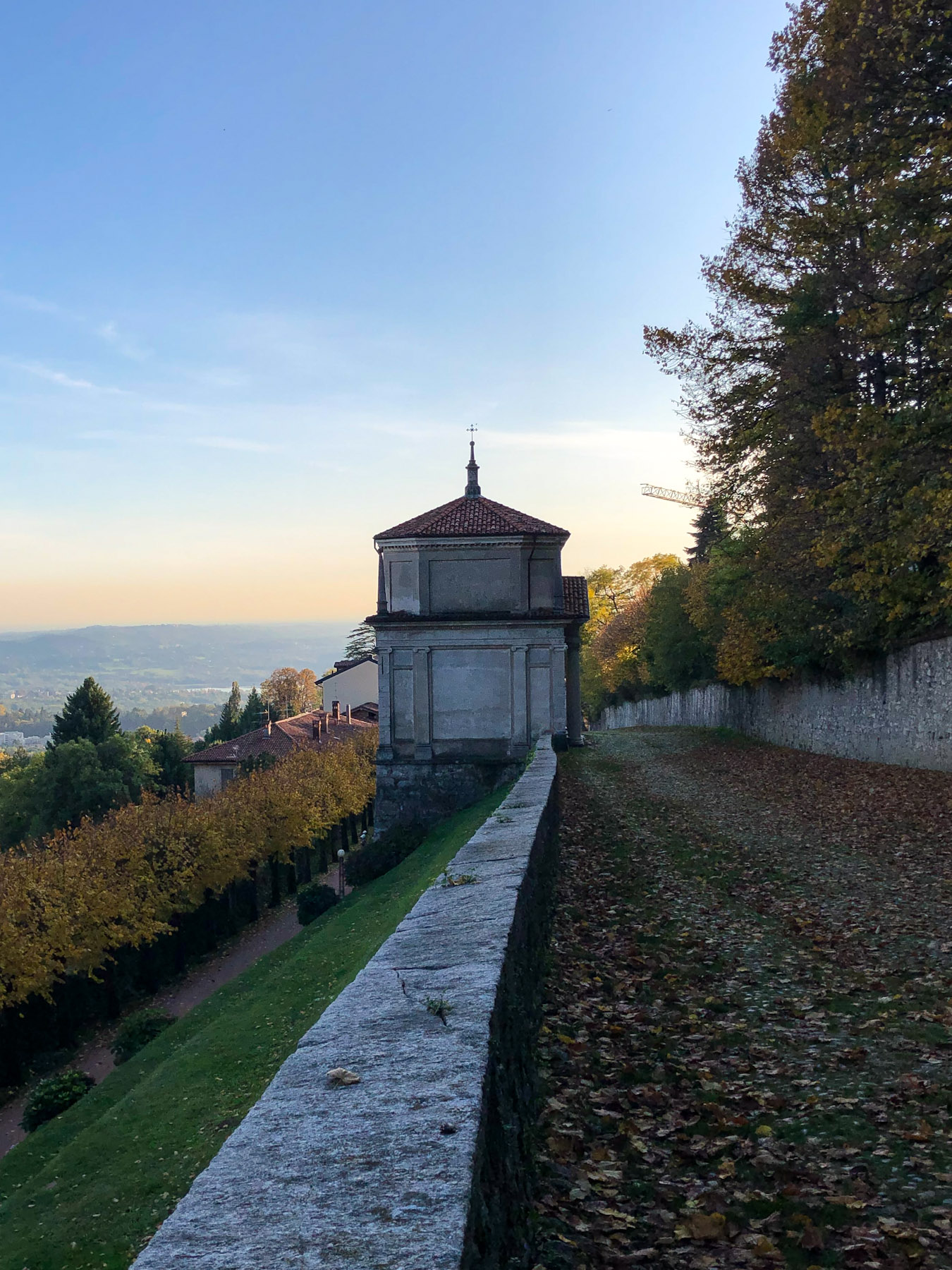