Charles and I love seafood. If you recall, it’s one of the key reasons why we chose Cape Cod – for its wealth of acclaimed seafood dining establishments. Avocet’s Nest did have a very nice kitchen, but after cooking every single meal for six months straight, we were both eager to dine out as much as we could during those seven days. I did do some research beforehand and catalogued a list of restaurants to try, but I did not think to make reservations in advance because, after all, it was past peak-season. Little did we know that due to the “new normal” brought about by COVID, peak-season on the Cape had extended into the fall. Thankfully, we did manage to reserve a table at most places.

We were particularly smitten with our meal at Mac’s Shack in uptown Wellfleet, the “cloth-napkin” outpost in the mini-restaurant empire of Mac’s Seafood. They had a really nice outdoor dining setup with overhangs, heat lamps, festive lights, and most importantly, well-distanced tables. I had the prosciutto-roasted cod, which was served floating in a bowl of tomato compote with kale and fingerling potatoes. Charles went the more traditional route and ordered a platter of fried whole belly clams. All was delicious…and not a morsel was left uneaten.

We also really liked Jimmy’s Hideaway, right on the harbor in Provincetown. Not only was the food stellar, but our best friends, Bill and Charlie, surprised us by magically appearing at our table five minutes into our meal. Charles and I were dumbfounded and delighted. The four of us dined together and had a very merry evening, filled with martinis, Negronis, and lots of food. I had a hearty fisherman’s stew, a nod to the Cape’s Portuguese population and culinary influence. It featured scallops, gulf shrimp, local littlenecks, cod, Peruvian potatoes, chorizo, and piri piri sauce. In addition to the stew, collectively we ordered oysters, New England clam chowder, a wedge salad, shrimp florentine, a hamburger, and baskets of fries. All of us are good eaters, so needless to say, we put away that meal in its entirety.

Our little village of North Truro lays claim to several gastronomic enterprises, the first being Truro Vineyards, located a stone’s throw away from Avocet’s Nest. Now, we didn’t go there for the wine — we went for the lobster rolls! Blackfish, a very respectable restaurant in Truro center, has a food truck outpost, the Crush Pad, stationed at Truro Vineyards. This is where I first met my new love: the Connecticut-style lobster roll. Instead of the mundane mayonnaise-dressed concoction served cold, the Connecticut-style is simple, yet scintillating: lobster meat, warm melted butter, and a top-split bun. And It didn’t hurt that the lobster came from waters only a few miles away.

After the rolls, we stopped at Chequessett Chocolate and picked up a few varieties of dark chocolate bars crafted on-site. The litmus test for me when buying chocolate is soy lecithin: if it’s listed as an ingredient, then the bar stays on the shelf. And ironically, it can stay on that shelf for quite some time and not turn because soy lecithin is a stabilizer–and poison for my GI tract. Needless to say, Chequessett doesn’t use any stabilizers. They also source cacao beans from family-owned, sustainable operations worldwide. We loved the tart, sweet, and crunchy Aquinnah Almond and Cherry, made from 70% dark, and drooled over Wellfleet Sea Salt, with its piquant salt crystals colliding with 72% dark.

One afternoon, Charles and I went on a whale watch expedition, chartered by Whale Watch Dolphin Fleet out of Provincetown Harbor. Due to COVID restrictions, the boats were at 50% capacity, and the number of daily charters were cut in half because of the time needed to disinfect the boats between sailings. Thankfully, we were able to purchase tickets day-of. The actual whale watching takes place in Stellwagen Bank National Marine Sanctuary, an 842 square-mile reserve located at the mouth of the Massachusetts Bay, between Cape Cod and Cape Ann; it takes about an hour to get there upon departing the harbor. The sanctuary is home to a multitude of aquatic species, including humpback, minke, fin, and North Atlantic right whales as well as great white sharks, seals, dolphins, and large-body fish like Atlantic cod, striped bass, and yellowfin tuna.

Out on the open waters of the wild Atlantic, the wind and the waves were ferocious at times, but that didn’t stop the whales from making an appearance. They were slow to start, but the captain eventually positioned the boat near a very active pod. At first, all of the action was on the starboard side of the boat (we were on port side), which was very frustrating because roped dividers were tied up to keep watchers confined to one side of the boat. The docent would point out a dorsal fin or a tail stock and flukes, but we couldn’t see anything. All of sudden, the whales shifted sides and the action was front and center: a mother humpback and her calf surfacing directly in front of our row. And then the most incredible thing happened – a full breach, which I caught on my digital camera in continuous shooting mode! Oh Mother Nature, how you never cease to amaze me. That breach was the highlight of the trip…and quite possibly of the year 2020 (with the exception of the birth of my niece). 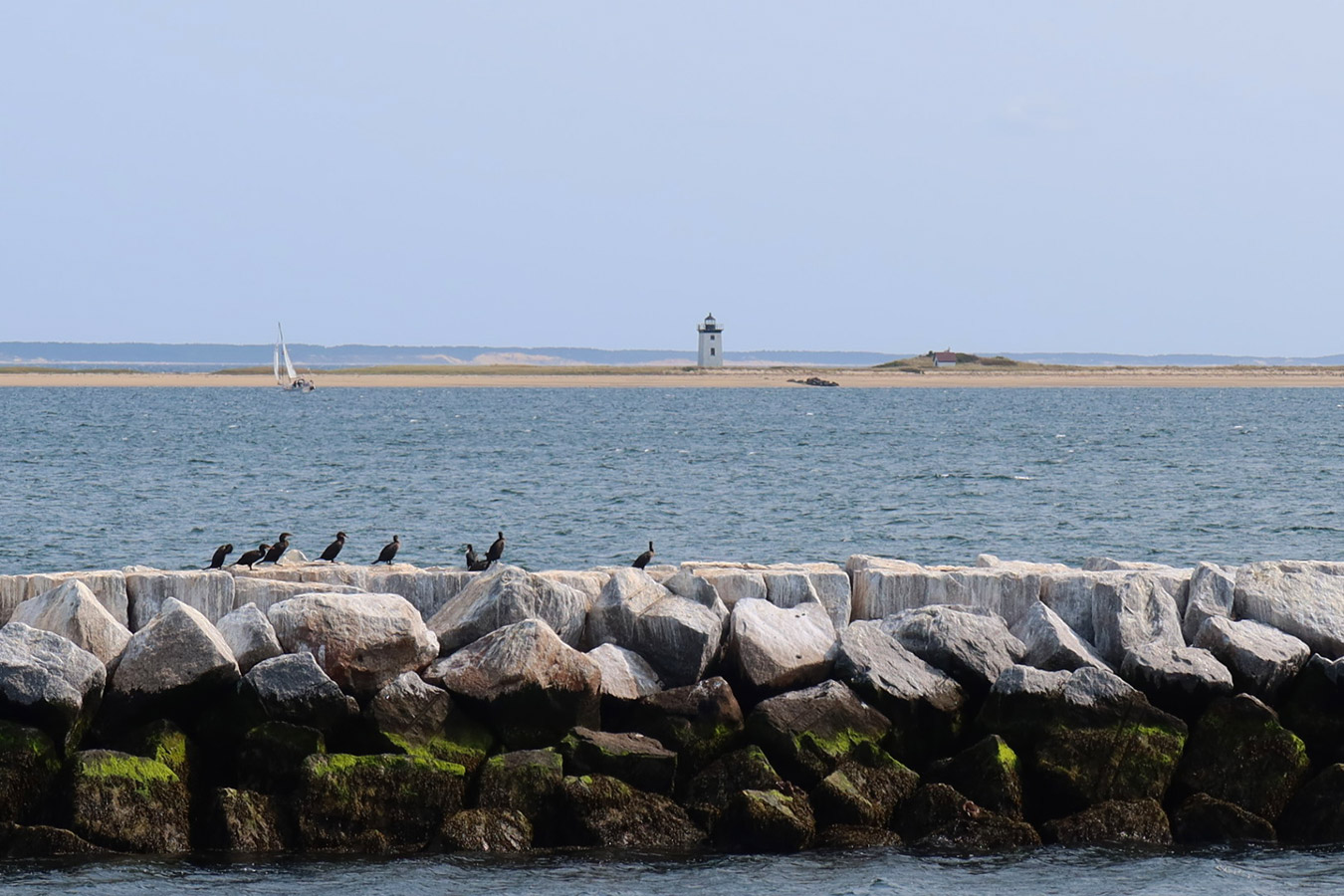 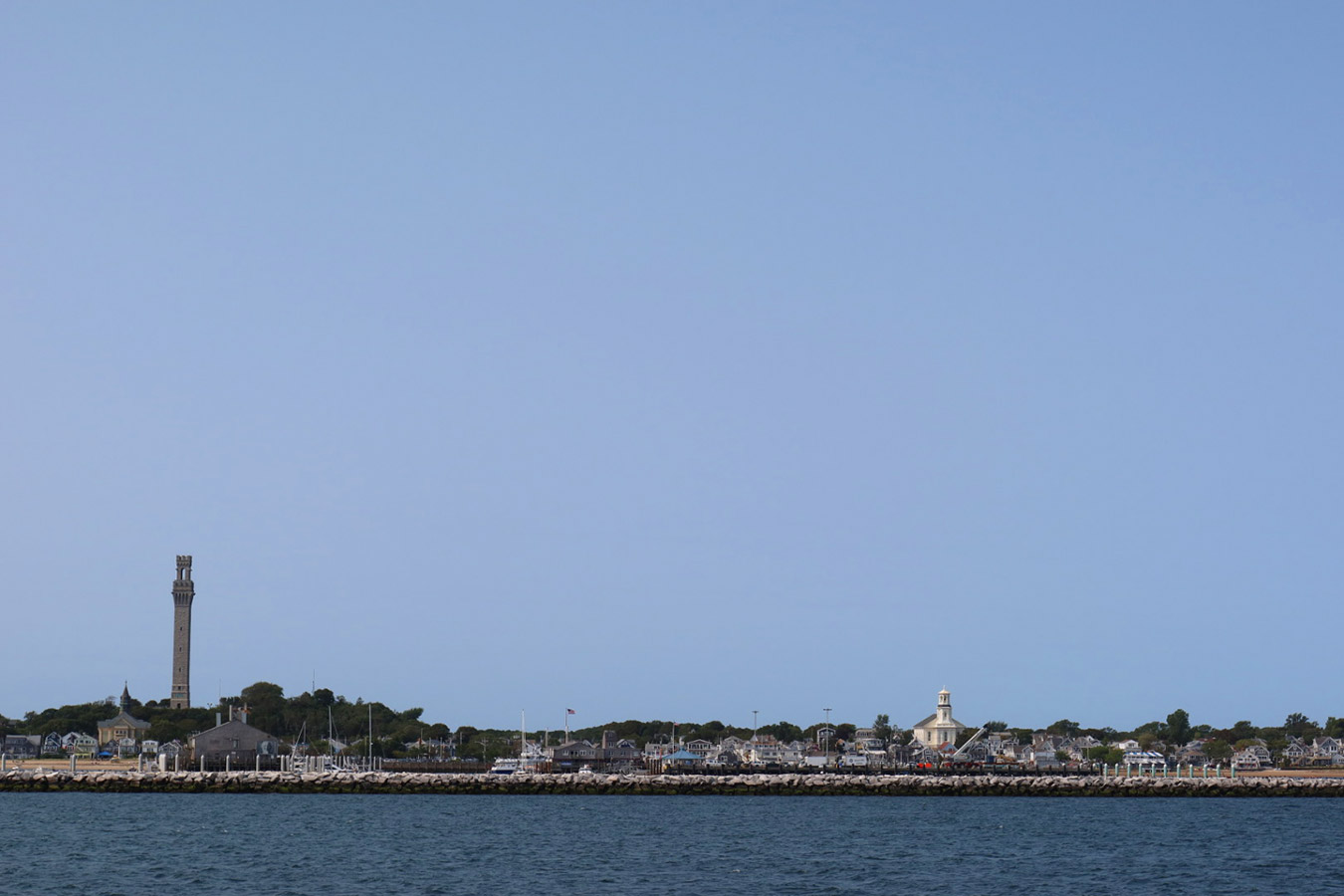 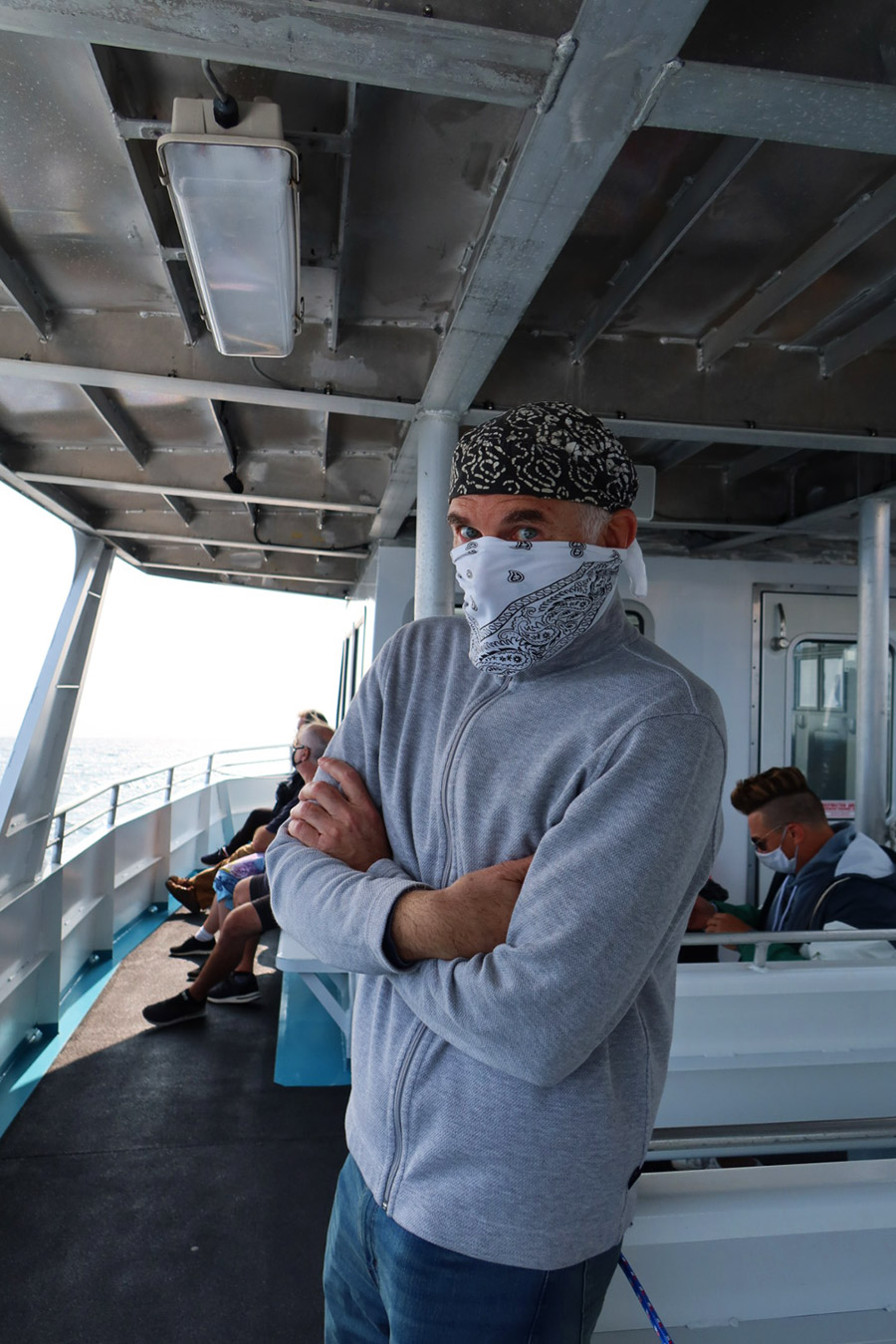 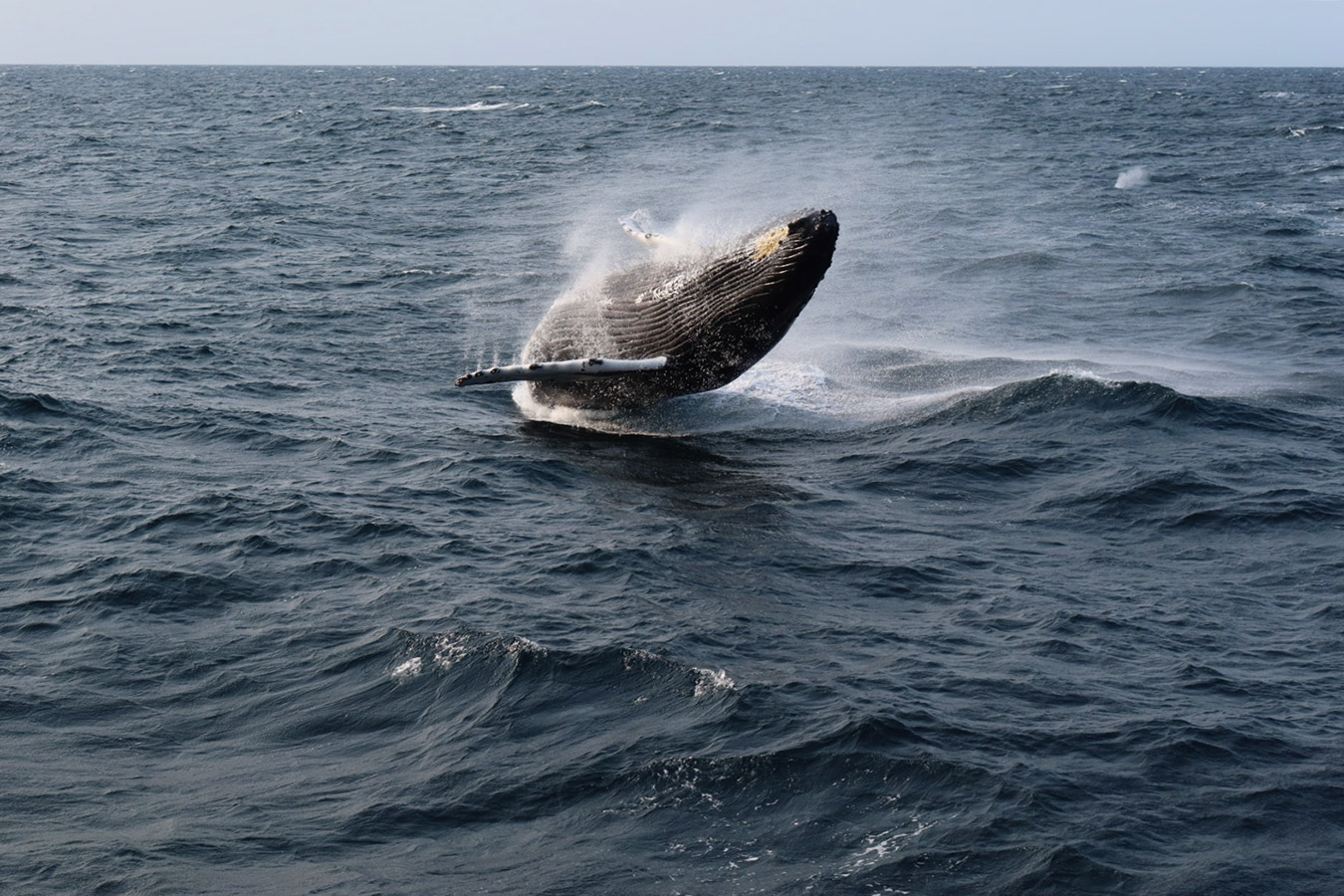 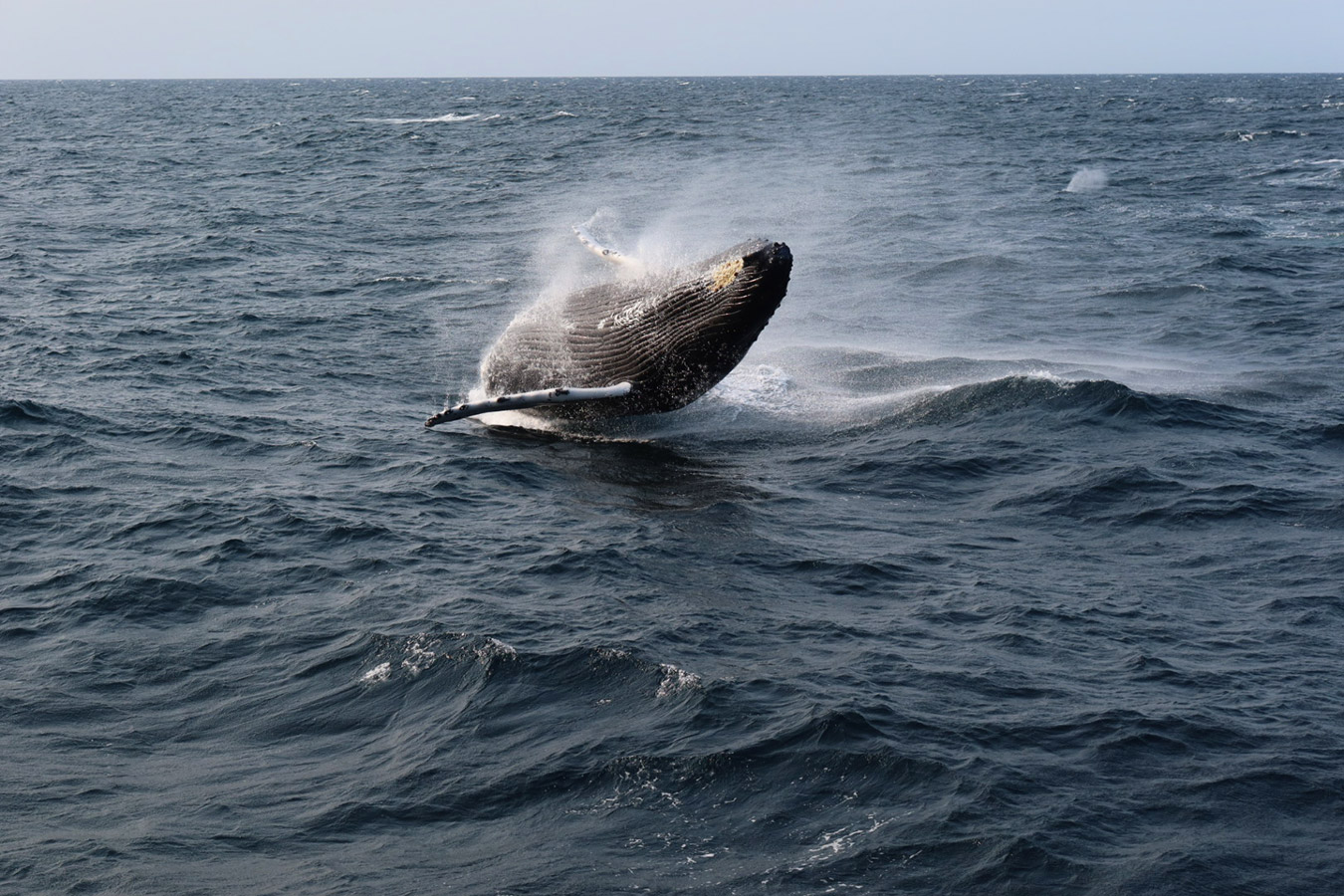 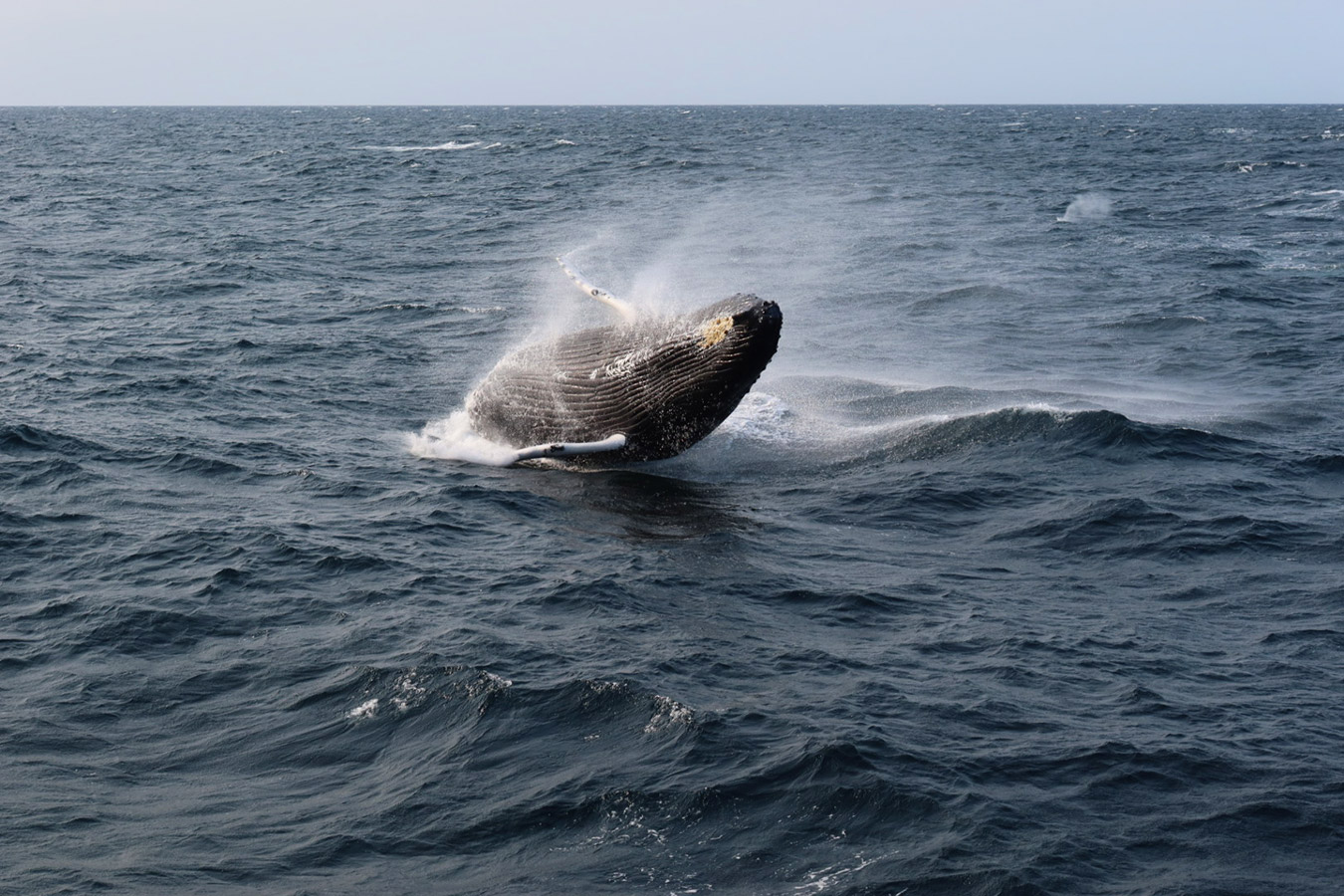 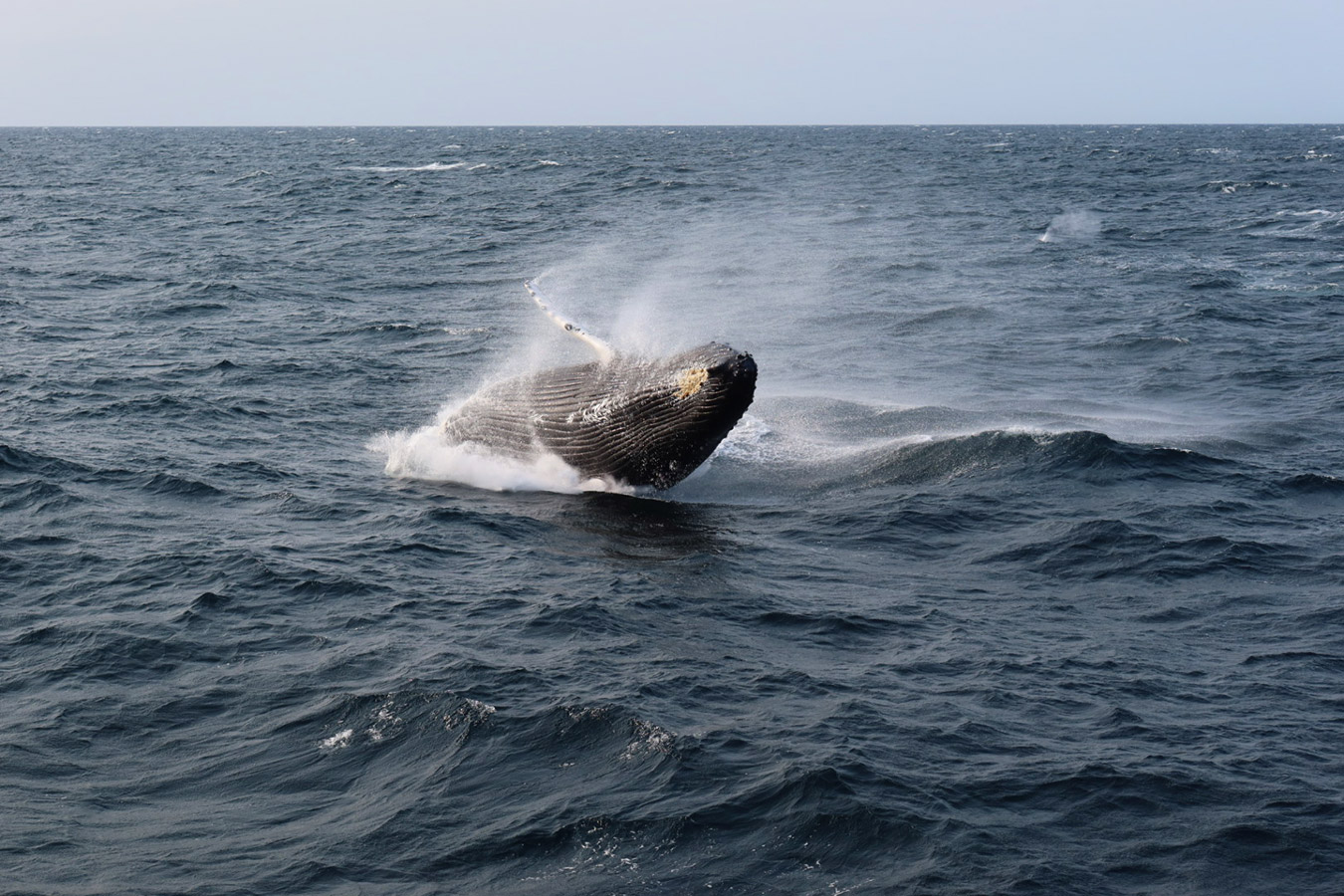 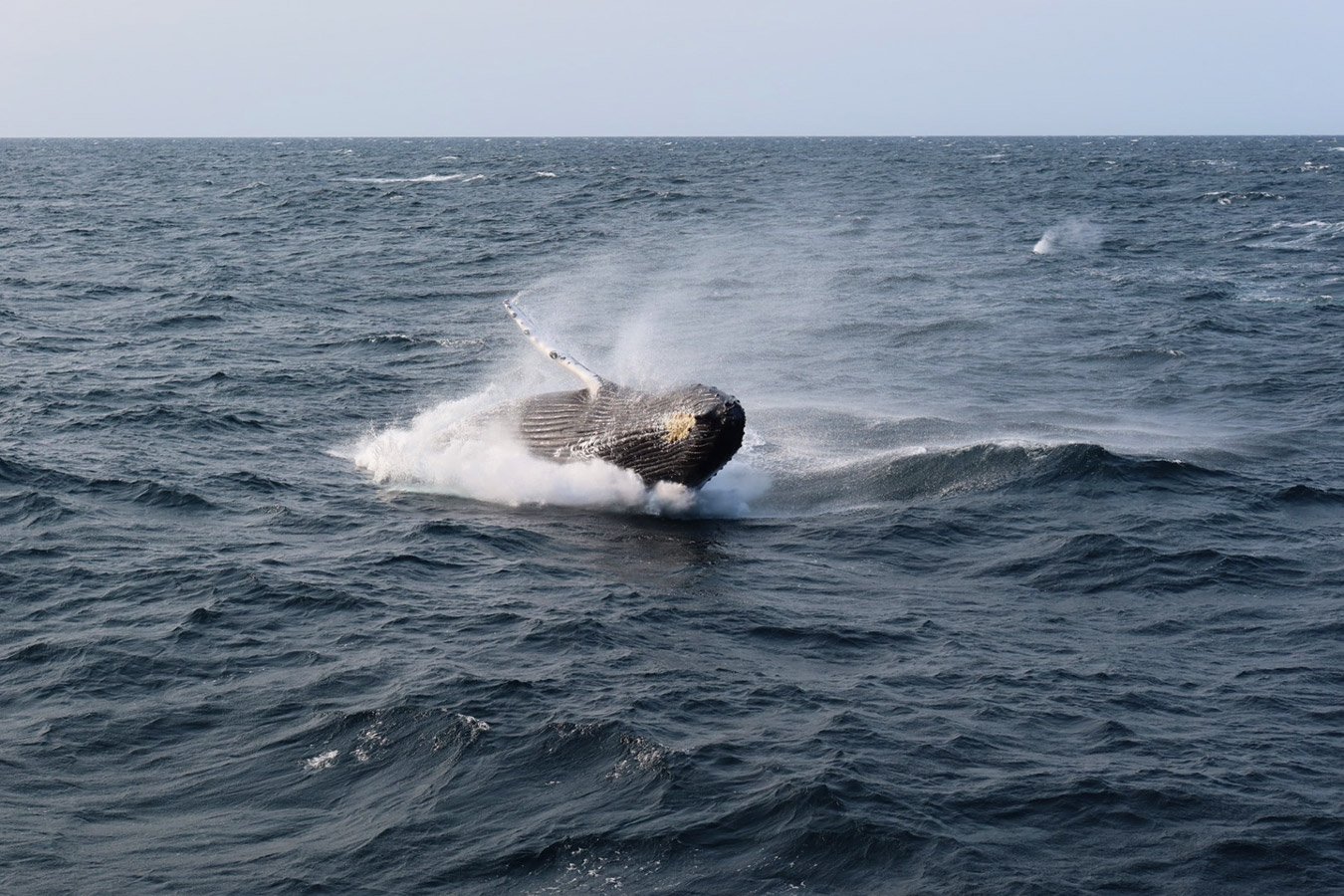 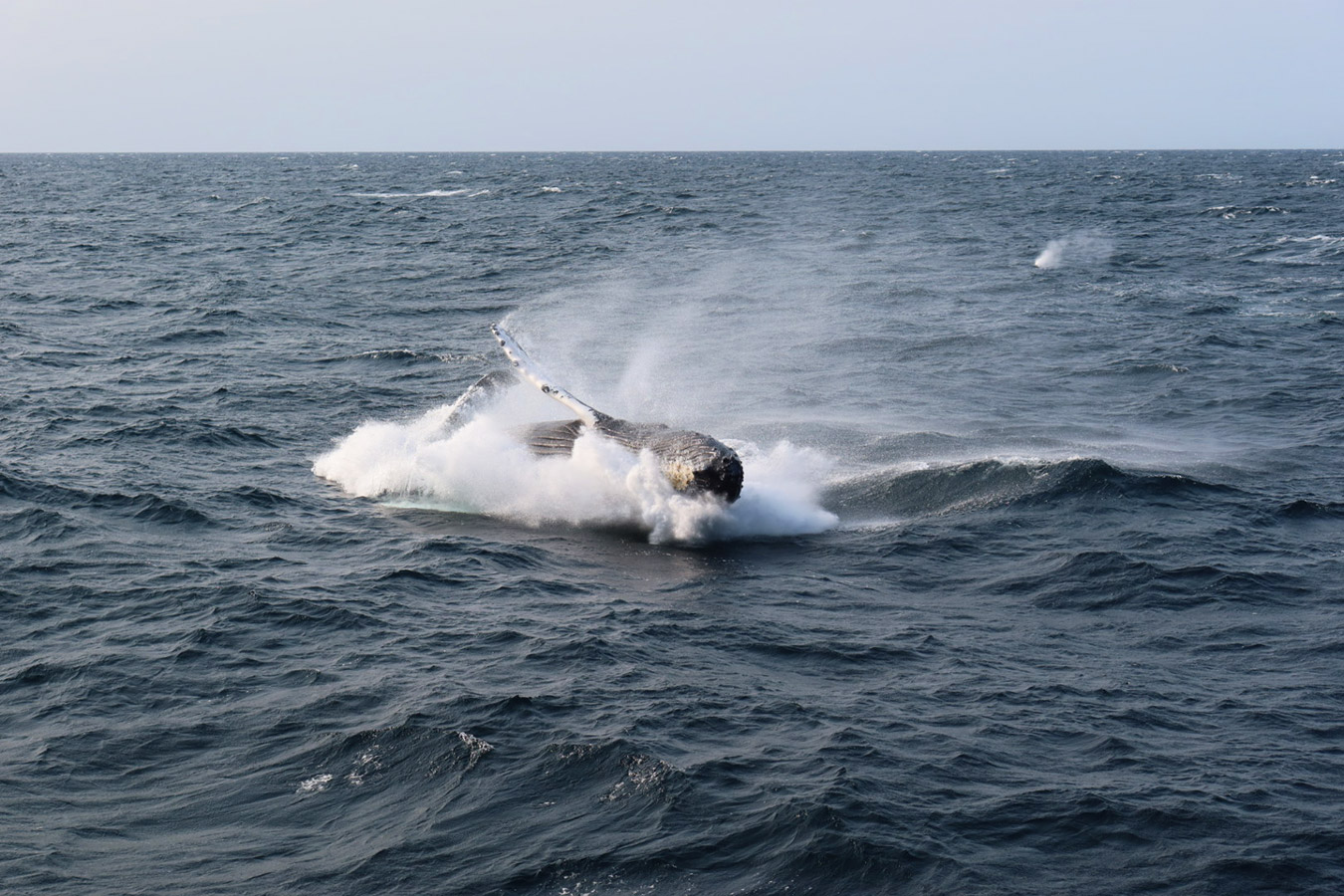 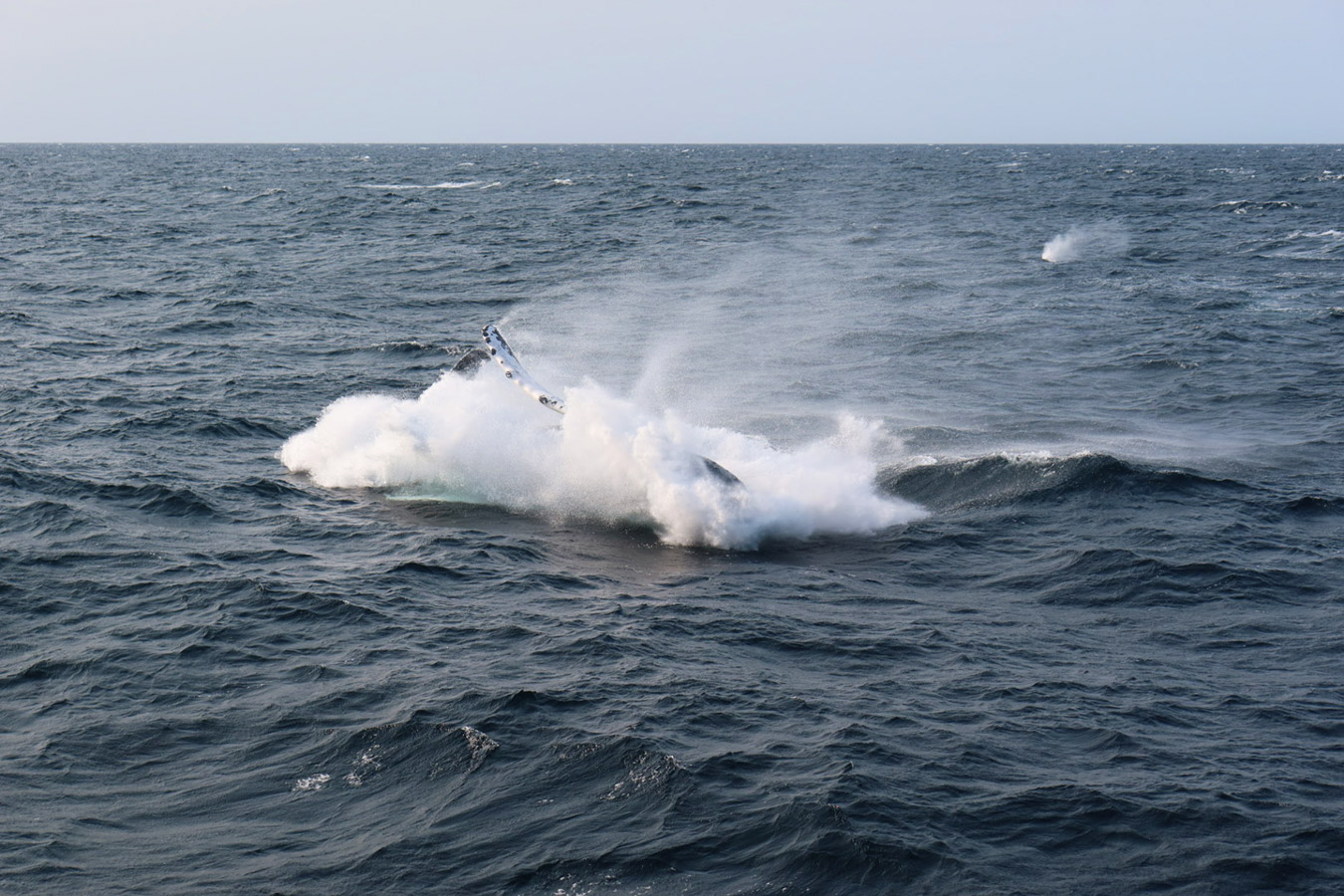 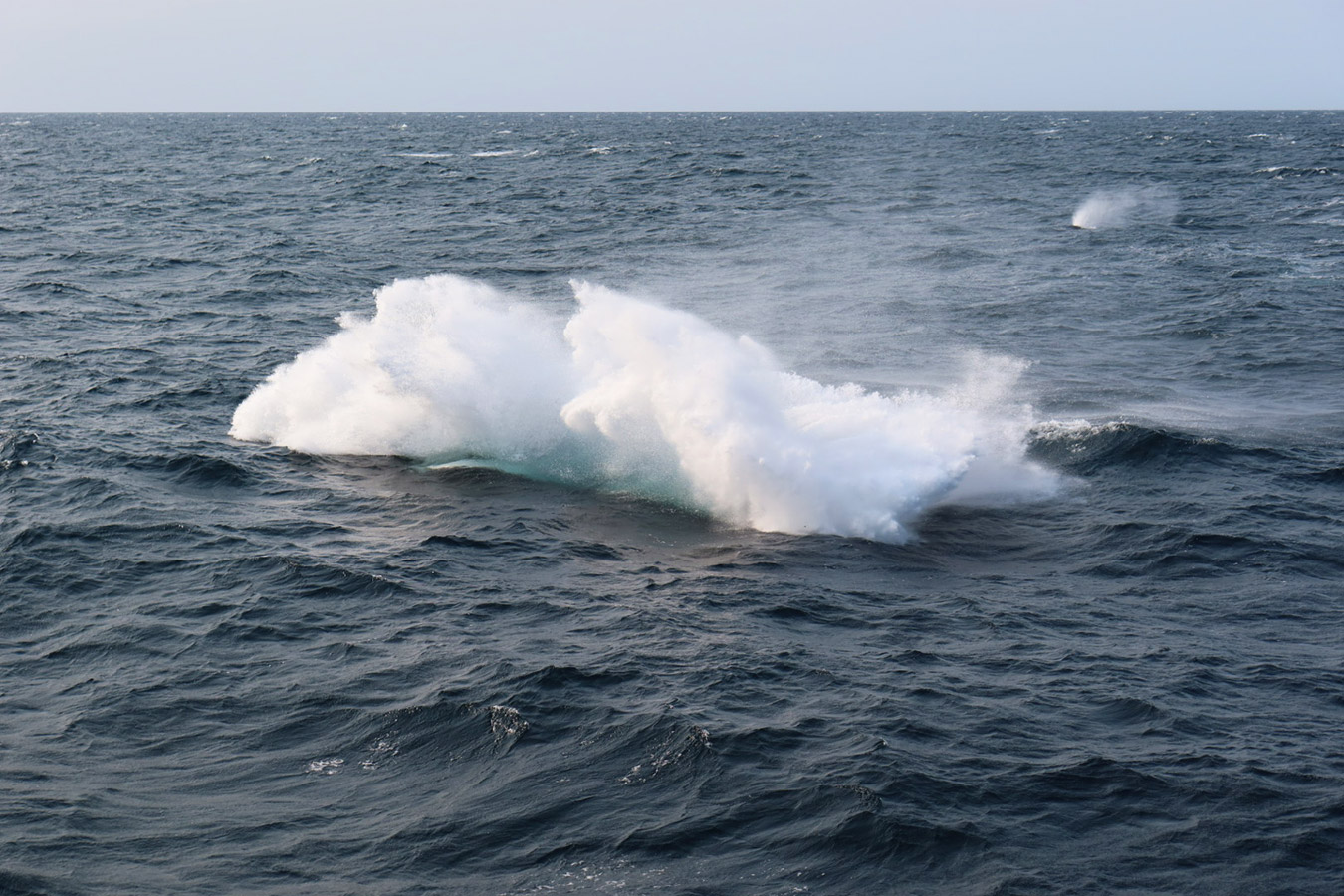 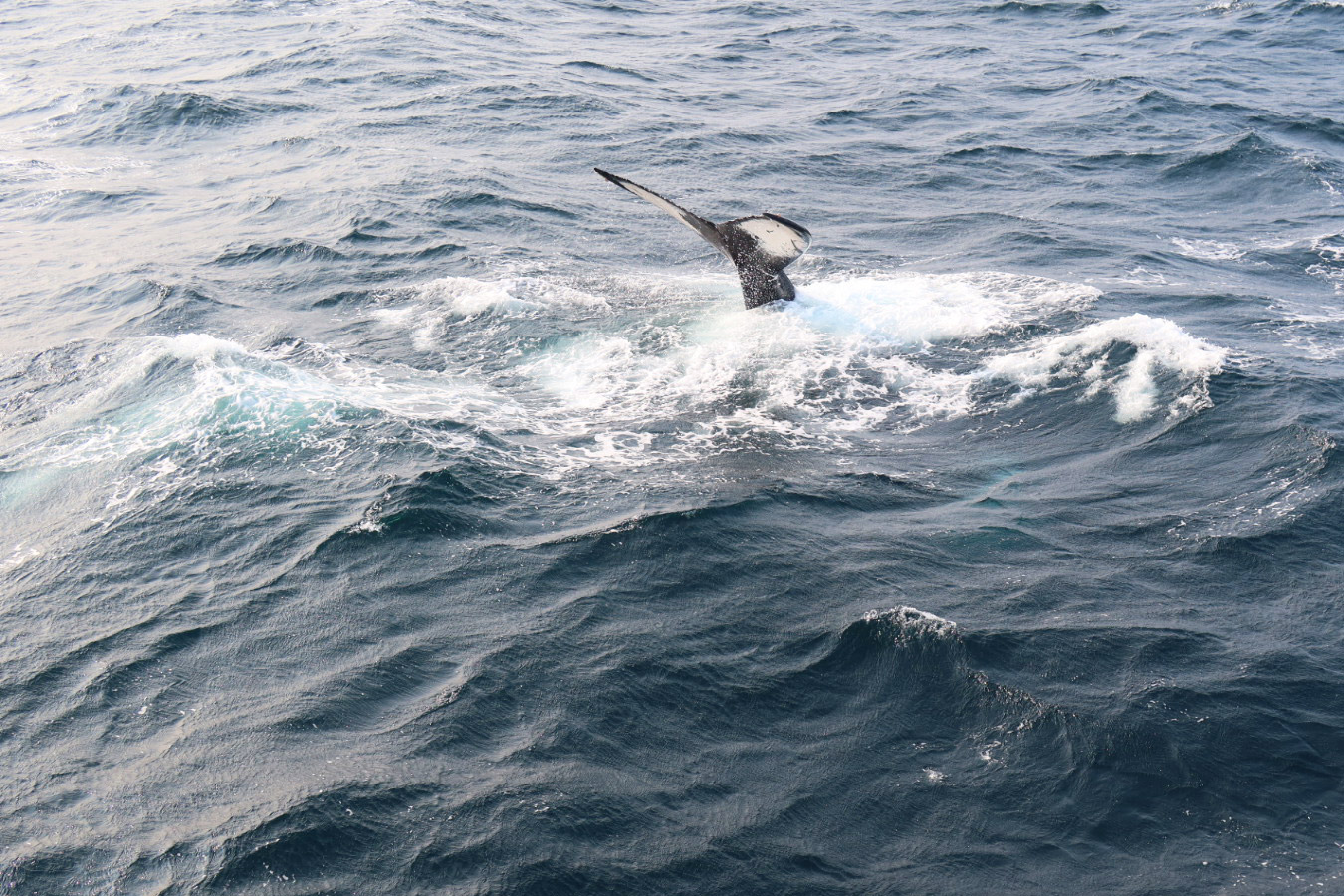 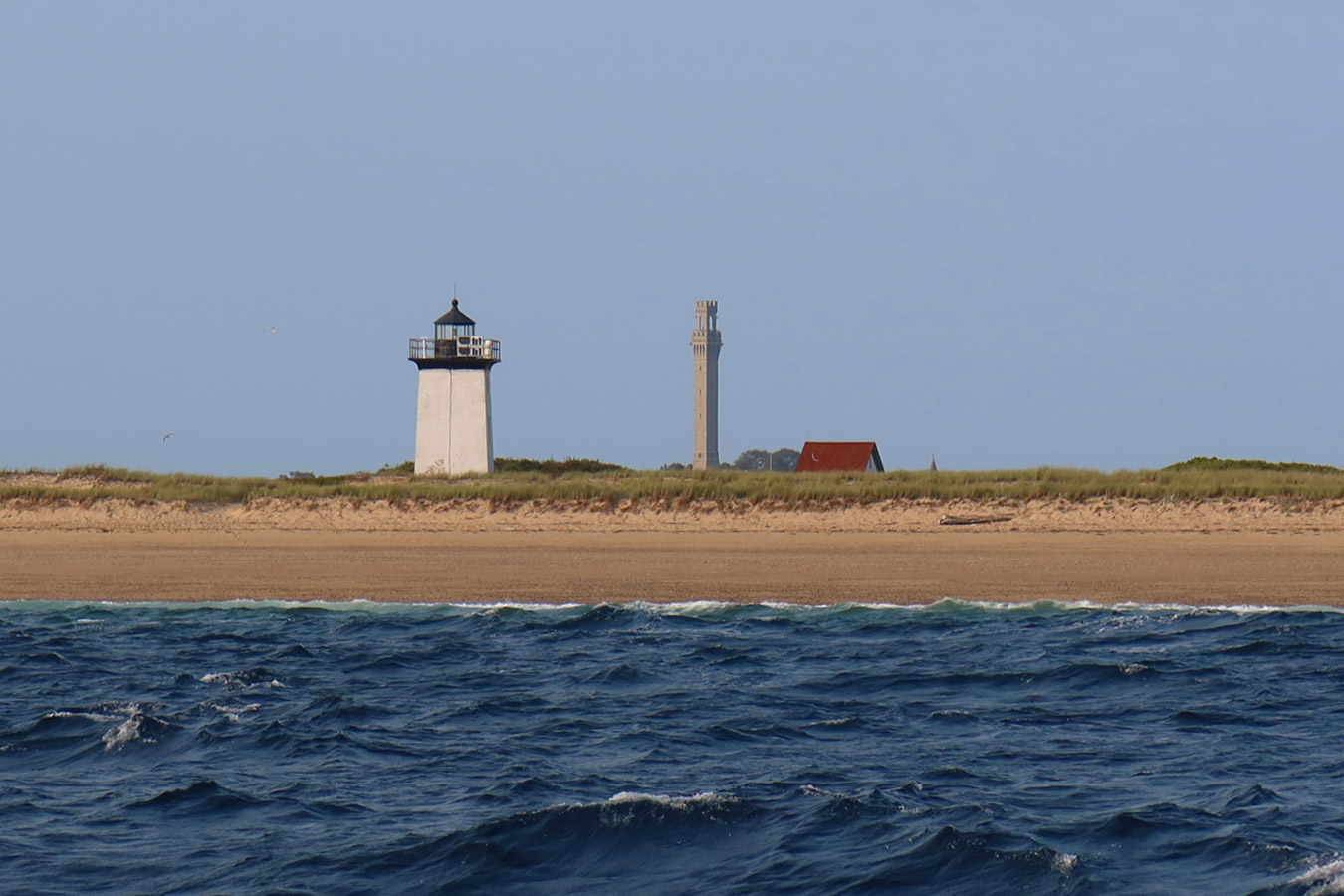 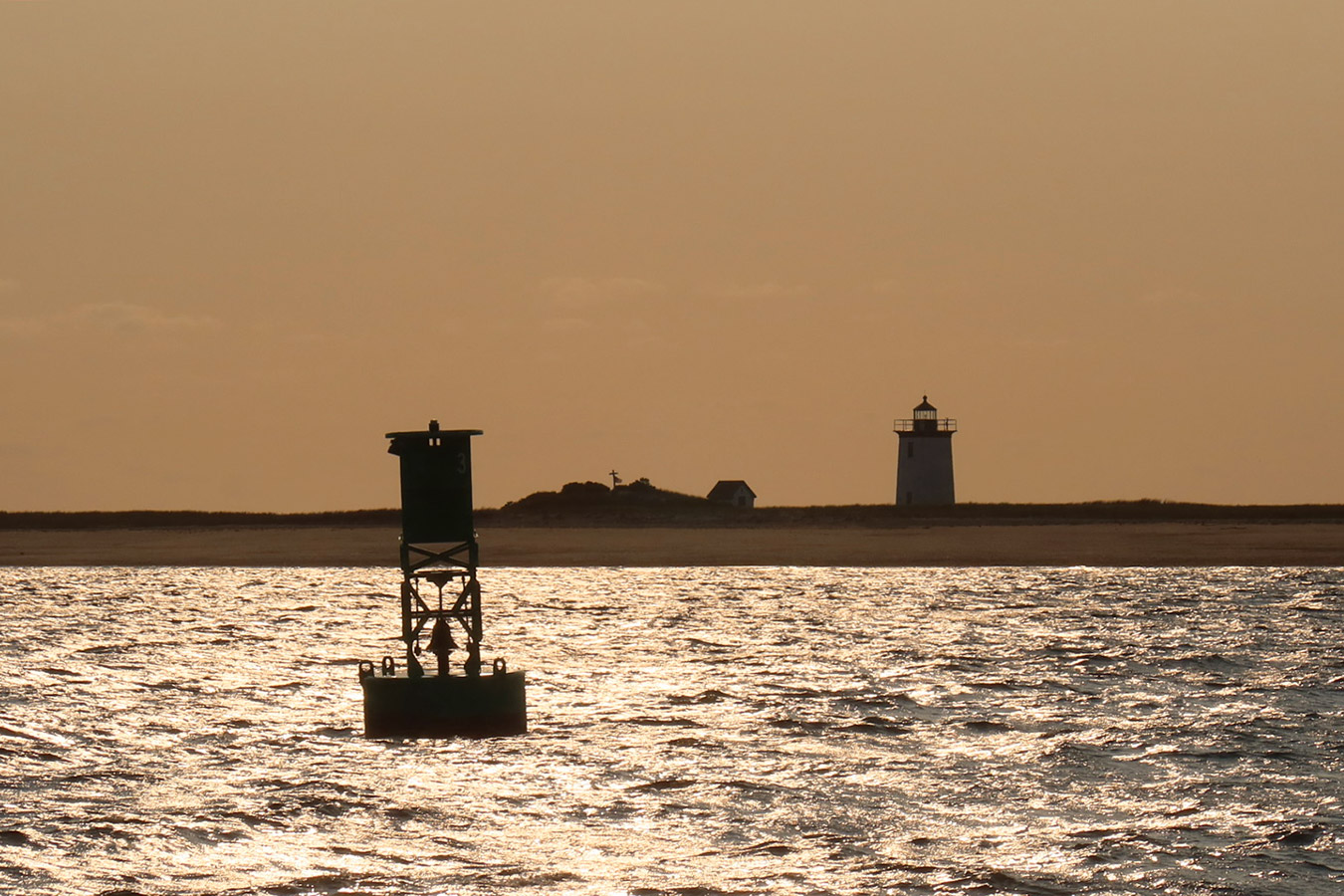 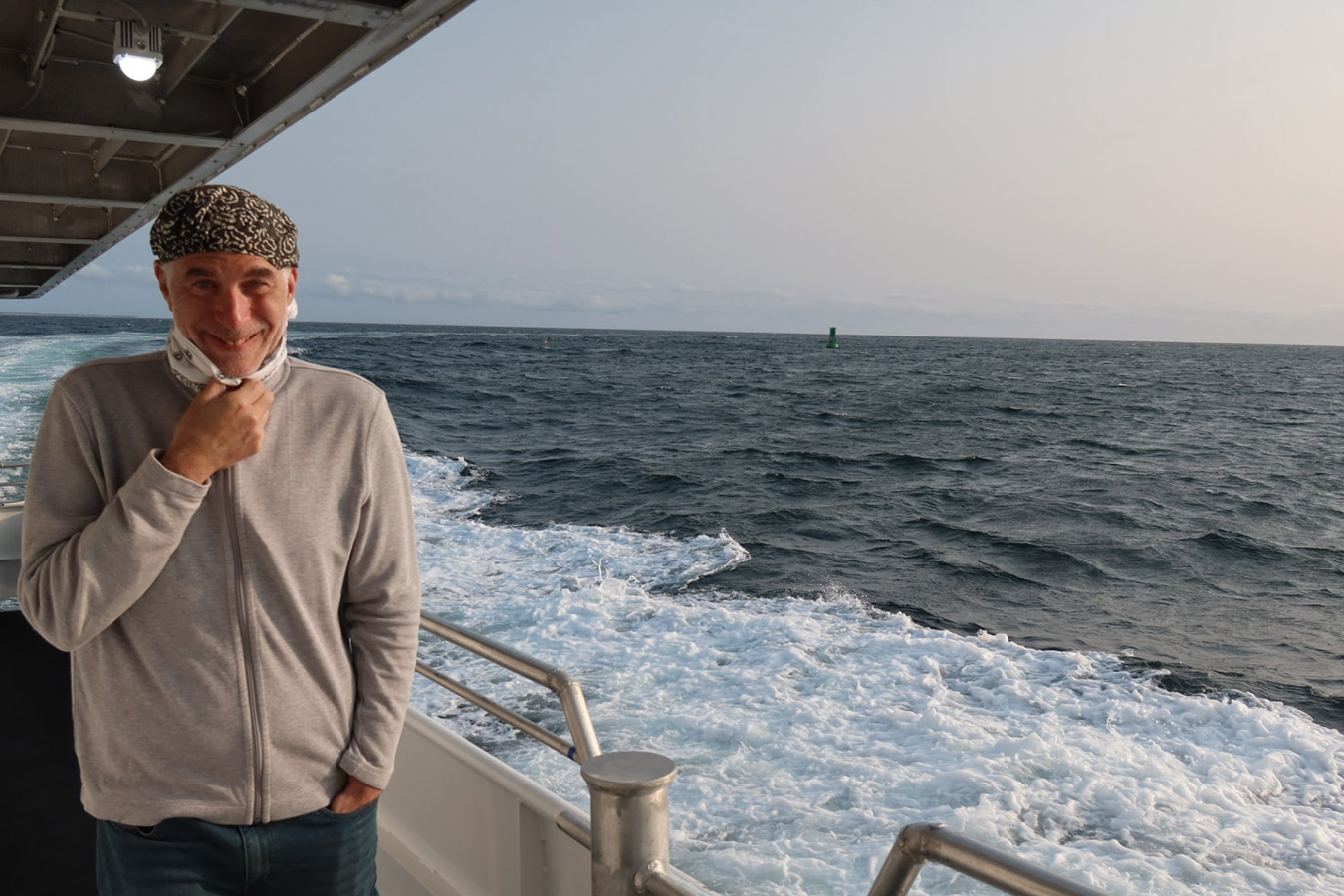 Before we knew it, our week of solitude had come to a close…and what a wonderfully relaxing week it had been. Charles half-jokingly quipped that we should’ve taken Avocet’s Nest for two weeks. But alas, it was time for us to depart. On our way off the Cape, we stopped at PB Boulangerie in South Wellfleet to pick up some challah for Rosh Hashanah, which had begun the day before. We then veered off Route 6 onto Route 28, which brought us around the “elbow” of the Cape through the genteel town of Chatham and past its namesake lighthouse, which dates back to the turn of the 19th century. We tried to visit the Monomoy National Wildlife Refuge in hopes of seeing wild seals, but the temperate fall weather had attracted a crowd of weekend warriors, which decimated our chances of finding a parking spot.

We made our way back to Route 6, but before officially exiting the Cape, I had one last detour in store: the Sandwich Boardwalk. Dating back to 1875 and spanning 1,400 feet over Mill Creek and a tidal marsh, the narrow-planked walkway connects the mainland with Cape Cod Bay and Town Neck Beach. Luckily there were fewer crowds here, and so we were able to park and saunter across the boardwalk in its entirety. The wind was intense and the surf fierce – very unlike the few paradisiacal days I experienced at our private beach further up the Cape – but the scenery was superb.

Afterwards, we stopped at Seafood Sam’s on the Cape Cod Canal for lobster rolls – Connecticut-style, of course. With butter dripping down our hands and a blazing autumnal sun warming us from the whip of the bay breeze, we ravenously devoured our lobster rolls. It was the perfect way to close out our week of bliss on Cape Cod. 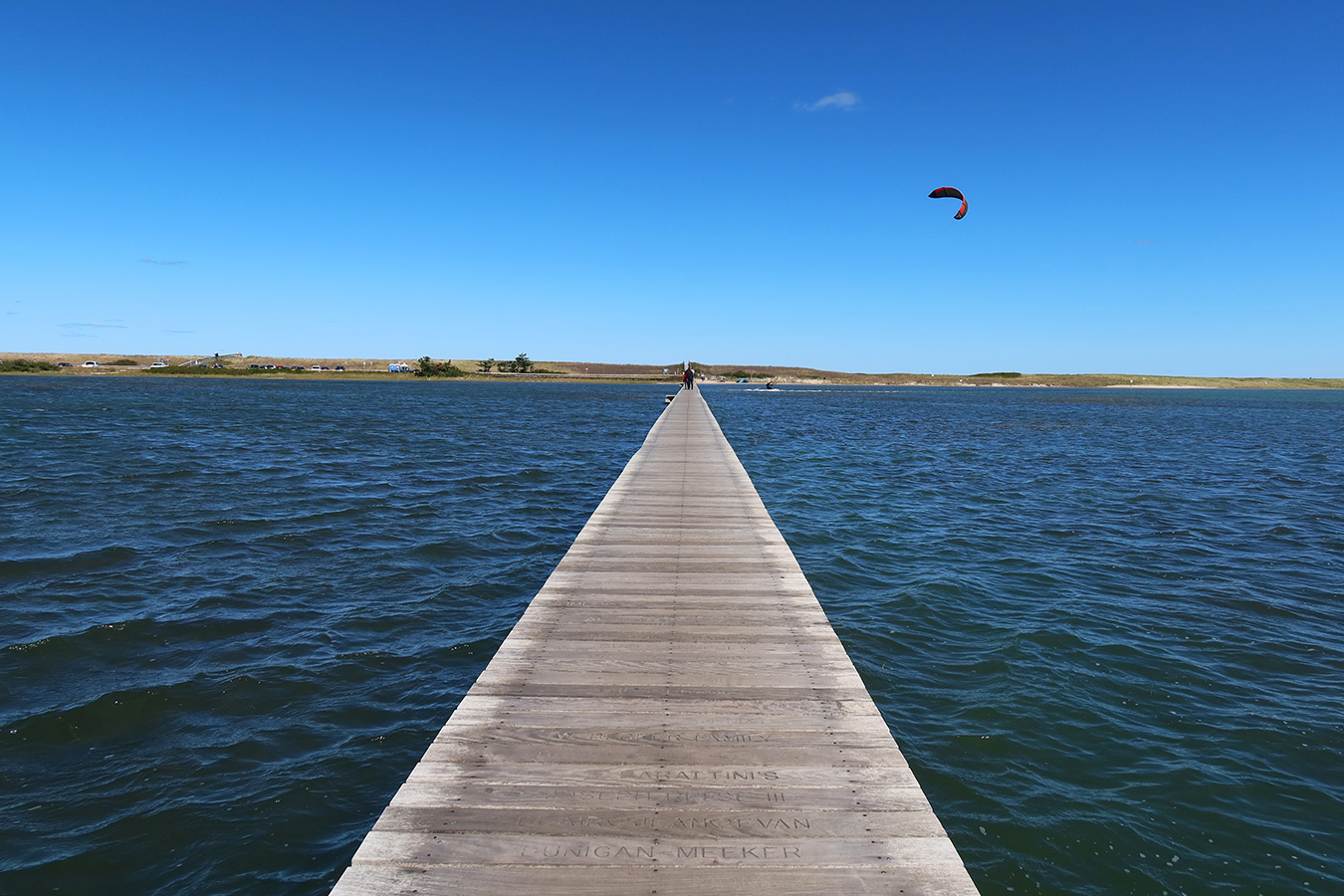 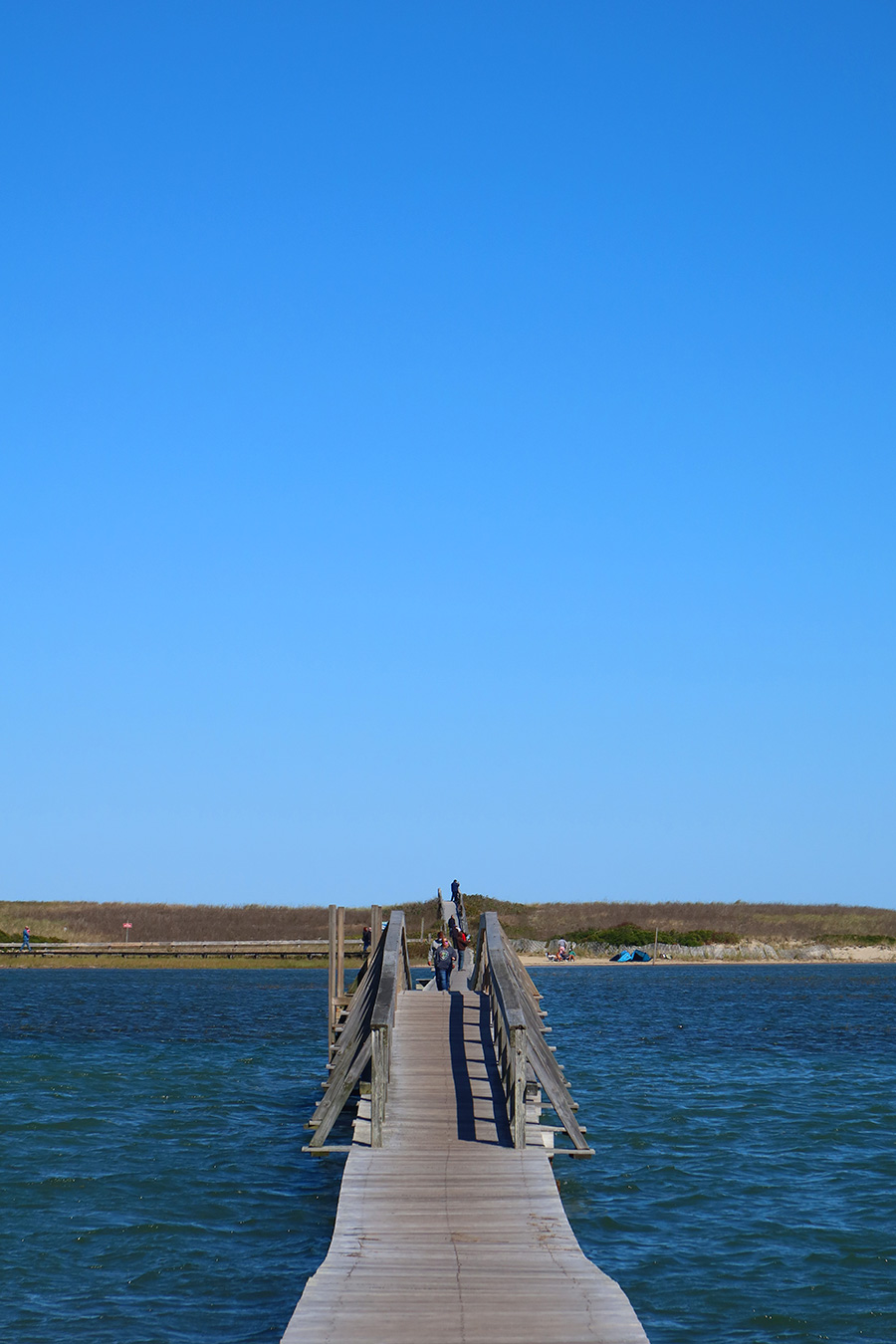 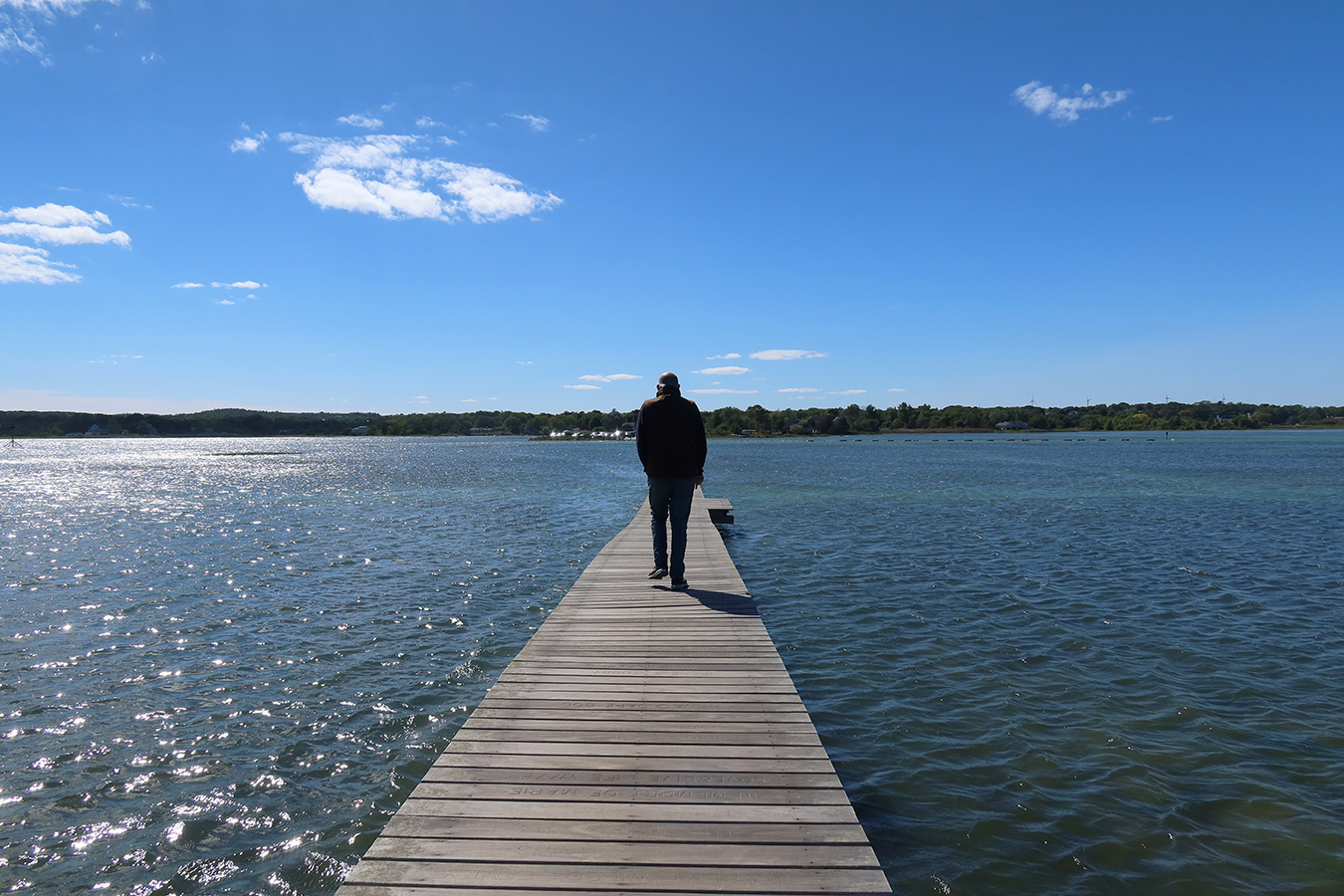 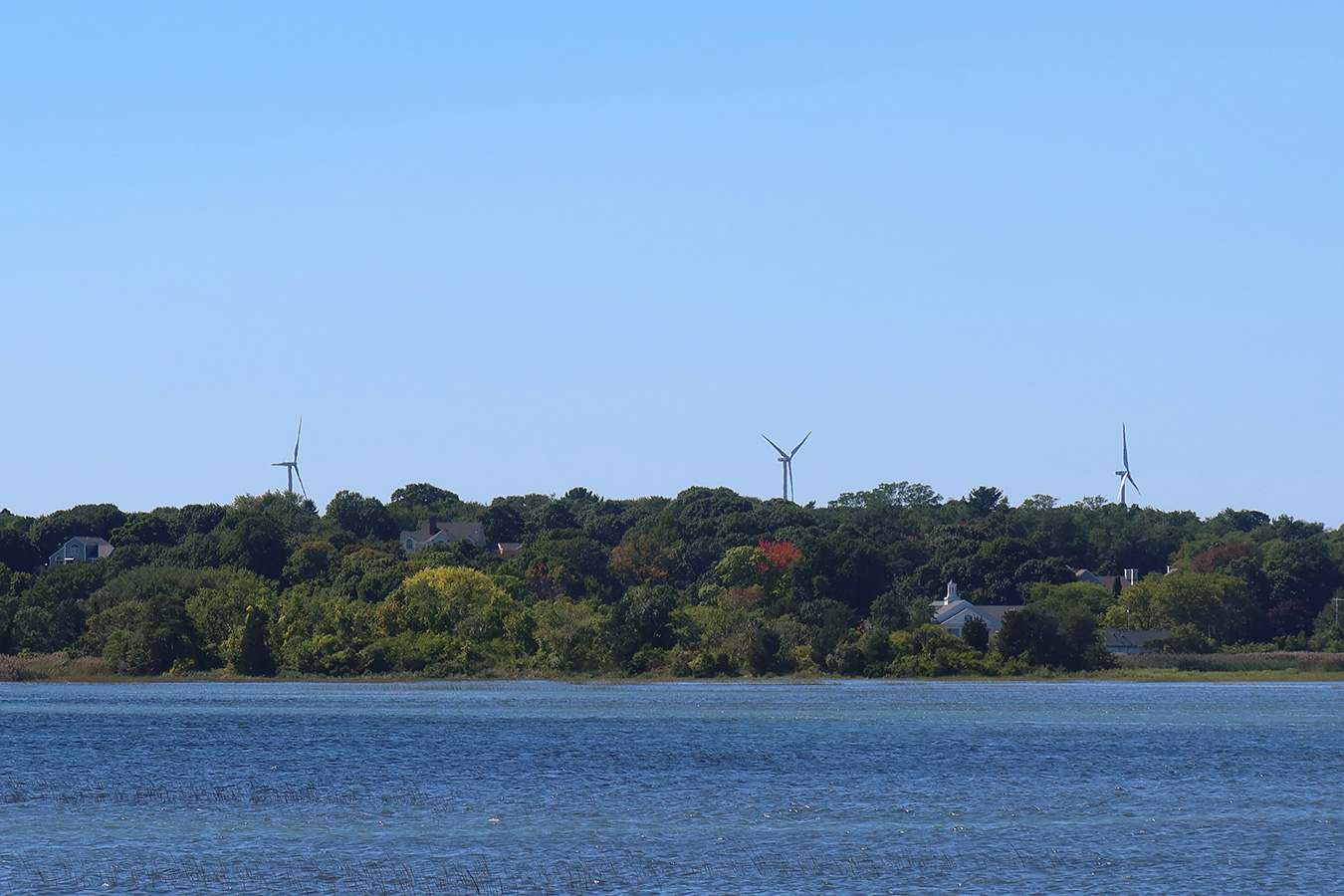 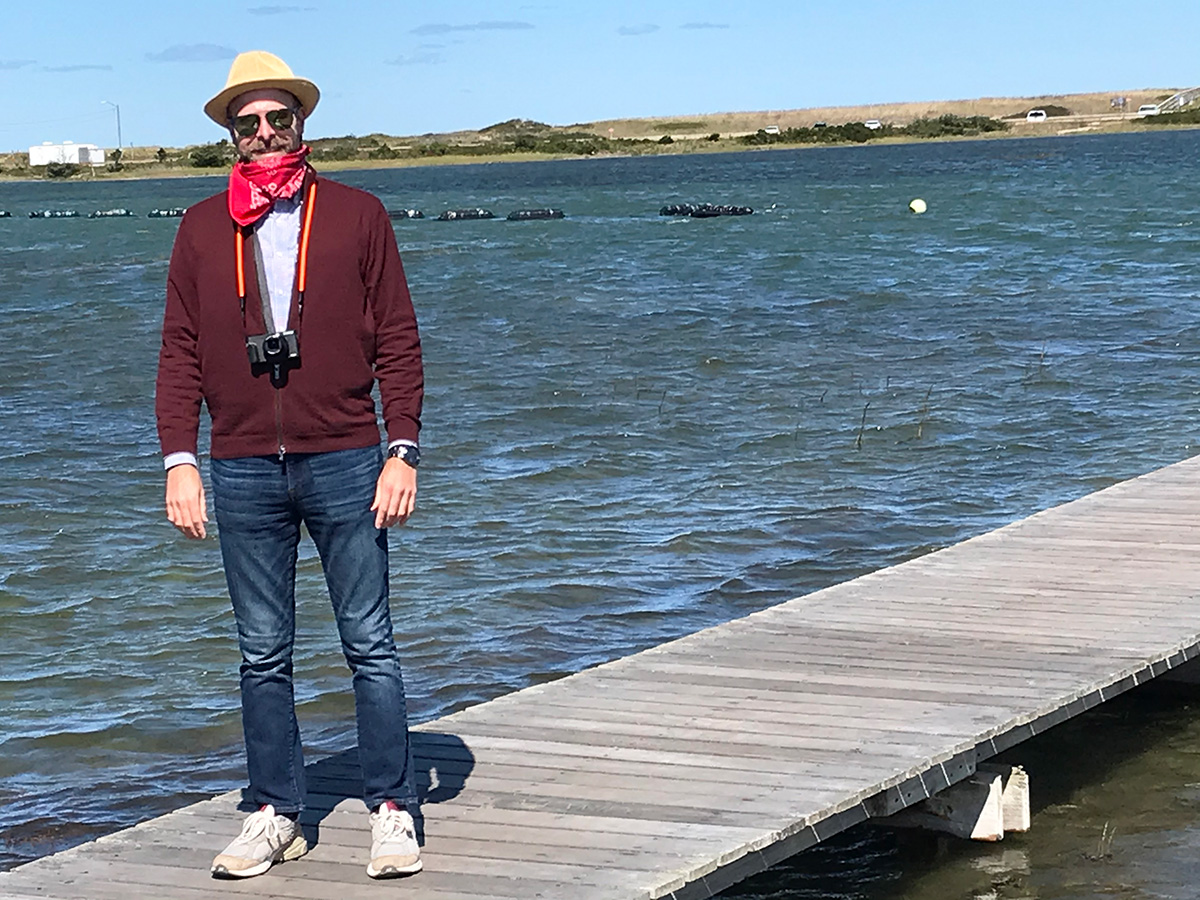