I recently embarked on a winter jaunt to Cartagena, Colombia with my best friend Steph. We had a yen for a warm-weather getaway, but wanted something different than the standard all-inclusive experience found in Cancun or Punta Cana. Cartagena had been on my short list for some time. I’d read about its burgeoning food scene and historic walled Old City filled with colorful Spanish Colonial mansions, cafes, boutiques, galleries, and artisan street markets. Steph was on board the moment I told her there’d be shopping.

Getting to Cartagena was a breeze. We took an early morning nonstop flight on JetBlue from JFK, and landed four hours and forty minutes later at the city’s small international airport. We deplaned onto the tarmac, and that first hint of Caribbean sun and heat was oh-so intoxicating. Passport control took only a few short minutes, and before we knew it, we were huddled in the backseat of a little red taxi en route to our hotel, Casa Claver, a loft-style boutique accommodation located in the walled city.

The taxi pulled up to a heavy wooden door, which opened to a tropical flora-filled lobby lit by a three-story open-air atrium positioned over a small basin with fountain. Our loft was a very large apartment with two spacious bedrooms, two bathrooms, a living room, and kitchen. All rooms opened up to private balconies and featured soaring cathedral ceilings and individual air-conditioning units. The pièce de résistance was waiting for us on the roof—a soaking pool overlooking the grand 16th-century Iglesia San Pedro Claver and surrounded by vibrant bougainvillea. A sundeck gave way to several comfy chaise longues, while a teak pergola housed several more chaise longues beneath a canopy of lush greenery.

We easily fell into a rhythm of relaxation. Mornings began with breakfast served at the dining table in our loft. We would then climb the stairs to our rooftop oasis for several hours of reading, sunbathing, and intermittent dips in the pool. Come early afternoon we showered, changed, and hit the Cartagena calles for lunch and shopping. The narrow lanes of the Old City were lined with stores selling a mix of high and low fashion, accessories, jewelry, homeware, and art. On our first day I splurged on a pair of kaleidoscope swim trunks from OndadeMar, a Colombian luxury resort apparel brand. I also had success in Soloio, a Spanish menswear line fabricated in Italy, and loved the vibe at St. DOM, a multi-brand concept store in a beautiful colonial-style house surrounding a central courtyard.

Steph was particularly taken by the street peddlers selling hand-woven bucket bags. They came in several sizes and many patterns, and while there were numerous vendors throughout the Old City, it seemed to me that each one had his or her own collection of exclusive designs and color combinations. Steph had us zigging and zagging from vendor to vendor in search of the perfect bag, but alas, she finally found “the one” at a market along the wall behind Iglesia San Pedro Claver.

Cartagena’s food scene is no longer burgeoning…it has arrived. We had several memorable meals, starting with dinner at Marea by Rausch. The restaurant’s waterfront location inside the Convention Center affords expansive views of the bay and the Old City. The space is elegant and contemporary, paired with a seafood-forward menu with Mediterranean and Caribbean influences. Highlights from the meal included a crab and guacamole tower served with a balsamic and mango reduction, and spaghetti frutti di mare prepared with homemade squid ink pasta. Yum. We ate exceptionally well at Donjuán, where Colombian-born, Basque-trained chef Juan Felipe Camacho churns out a large selection of Caribbean-inspired small plates in a bistro-like setting. Alma, the restaurant at Hotel Casa San Agustin, was also noteworthy, particularly for chef Heberto Eljach’s cazuela de mariscos—a seafood soup served in a coconut broth with coconut rice. Double yum.

The beaches directly in and around the city of Cartagena are no great shakes, but just off the coast are a series of coral islands surrounded by translucent turquoise waters. Our hotel arranged for a day trip to Isla Coralina, where we had access to the facilities at Hotel Islas del Rosario and boat transfers to and from the island plus lunch, all for around $80 USD. The outbound boat ride departed from the marina just outside the Old City walls. After 45 minutes of calm seas and sunshine, we arrived at a semi-private cabana club in the middle of the Caribbean with chaise longues waiting with our names on them.

The February sun was strong and the Caribbean was crystal clear and perfectly temperate. For lunch we ate freshly caught fish served with crunchy steamed vegetables and coconut rice. We met a lovely British woman on our boat who was staying at the island hotel for several days. Total seclusion, total relaxation…it sounded like heaven. Our day came to an end at 2:30 when the inbound boat arrived to take us back to the city. There is a weather phenomenon along the southern Caribbean coast that produces strong winds in the late-afternoon, which is why the boat retrieves the day guests at such an early hour. Well…the winds must’ve started early that day. The chop was intense. Everyone on the boat was white-knuckling their life preservers. The captain tried to stay near the coast, where the breaks weren’t as high. Ninety minutes later, we re-entered Cartagena’s inner harbor—relieved and in need of a strong alcoholic beverage.

On our last day, Steph and I ventured to up-and-coming Getsemani, a neighboring area just outside the Old City walls. Not long ago, the streets of Getsemani paid host to prostitution, drug dealings, and violence. The vibe today is bohemian with a Caribbean soul. We discovered narrow lanes lined with stunning graffiti, galleries showcasing blazingly colorful works by local artists, and charming cafes. We ate lunch at Chachara Restaurante, which had the purposeful look and feel of an abandoned building. Our favorite moment occurred when we stumbled upon an alleyway canopied by colorful umbrellas. I’d never seen anything like it…such a fun, whimsical, and uplifting display.

A popular activity in Cartagena is watching the sunset from Café del Mar, an established watering hole built directly into the ramparts with a perfect westward facing view. Being from the East Coast, it is rare that I get to see the sun dissipate into an aqueous horizon. We tried to get a table on the terrace, but it was nearly impossible, so we bypassed drinks and took in the sunset from a bench along the rocky shore. It was the last evening of our trip, and as we sat on that bench and gazed at the ball of fire hovering just above where the sky meets the sea, I thought to myself I’ll definitely be returning to Cartagena someday. 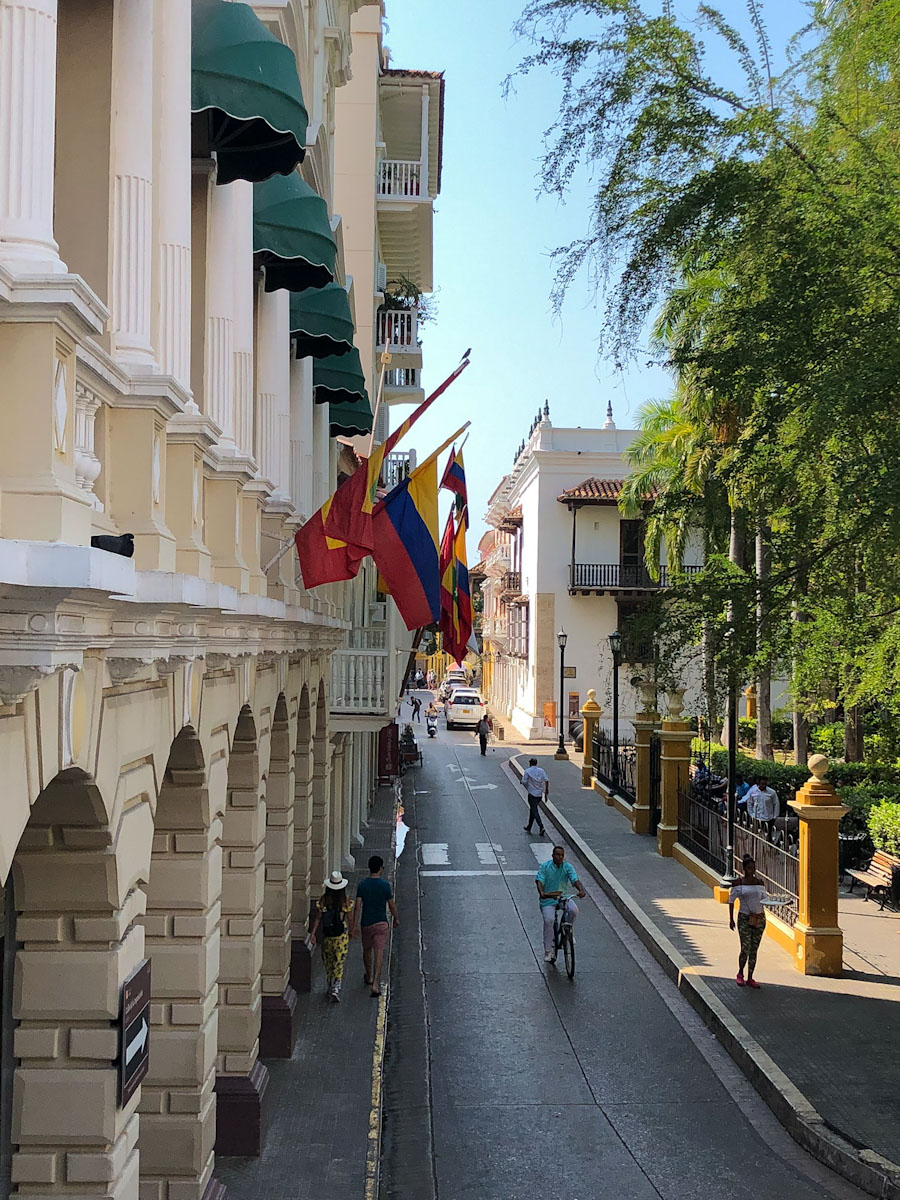 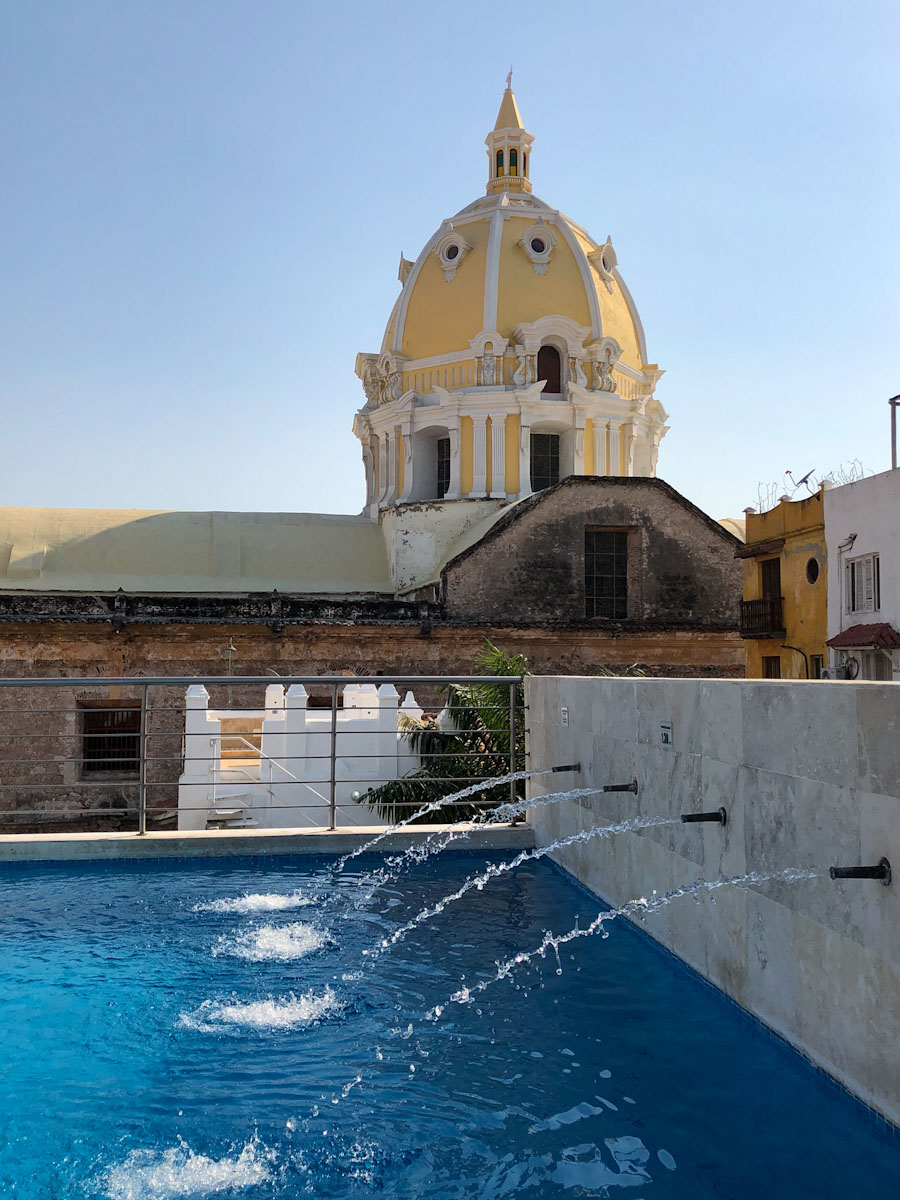 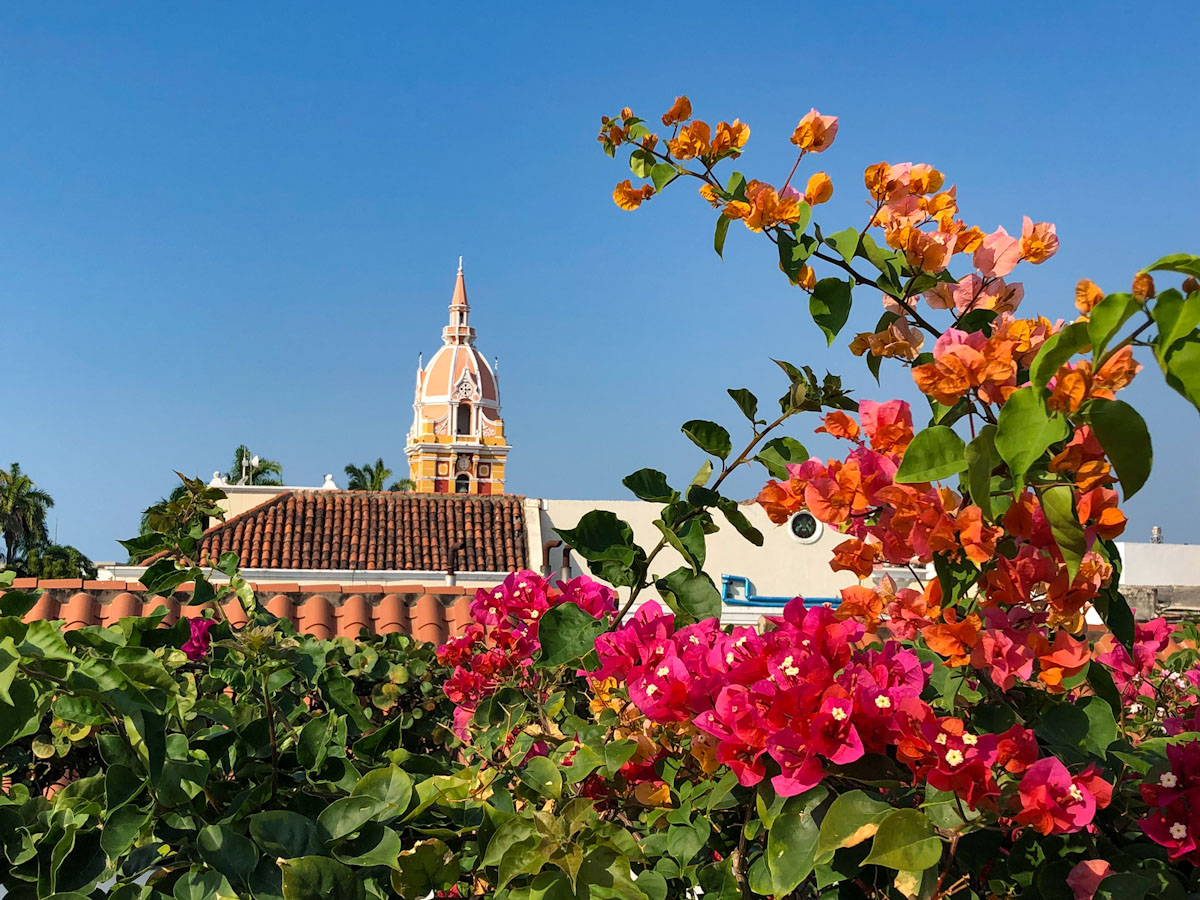 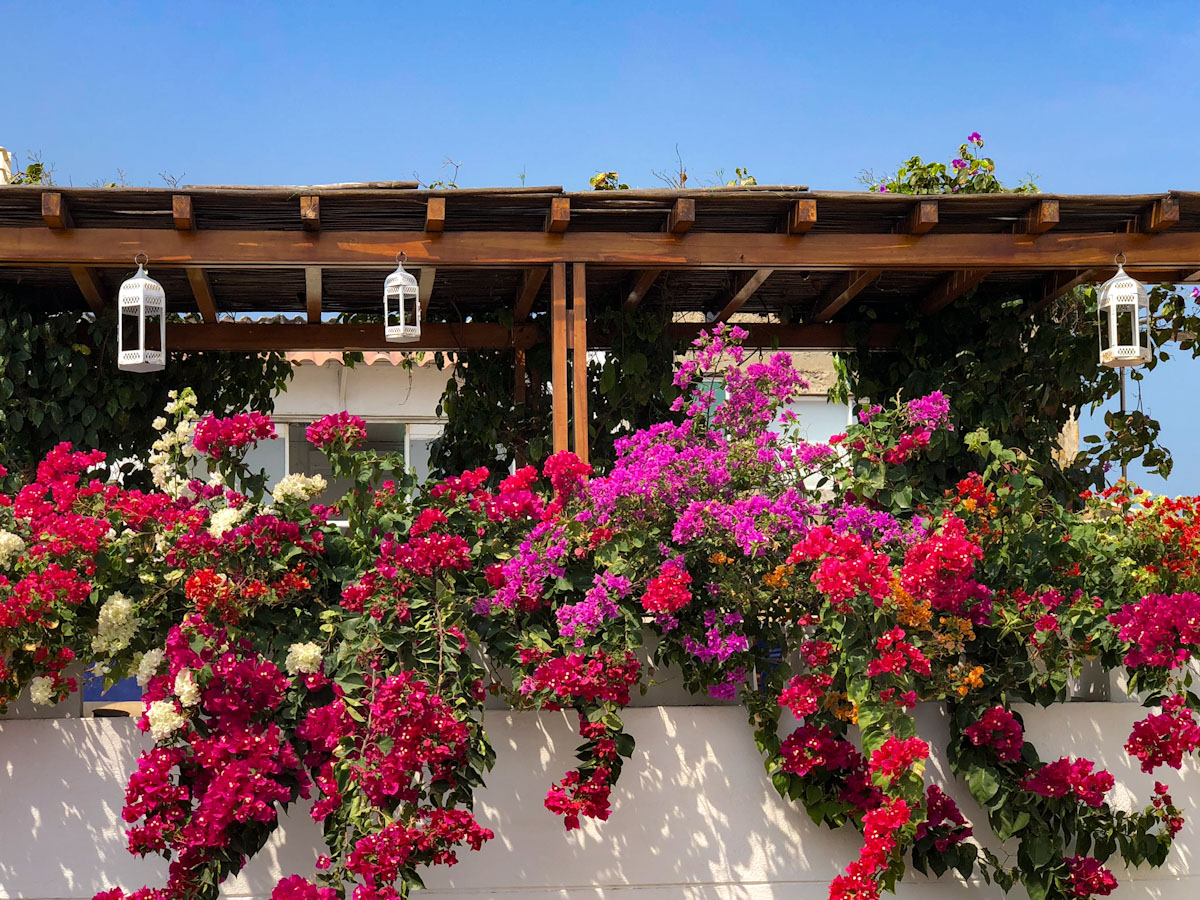 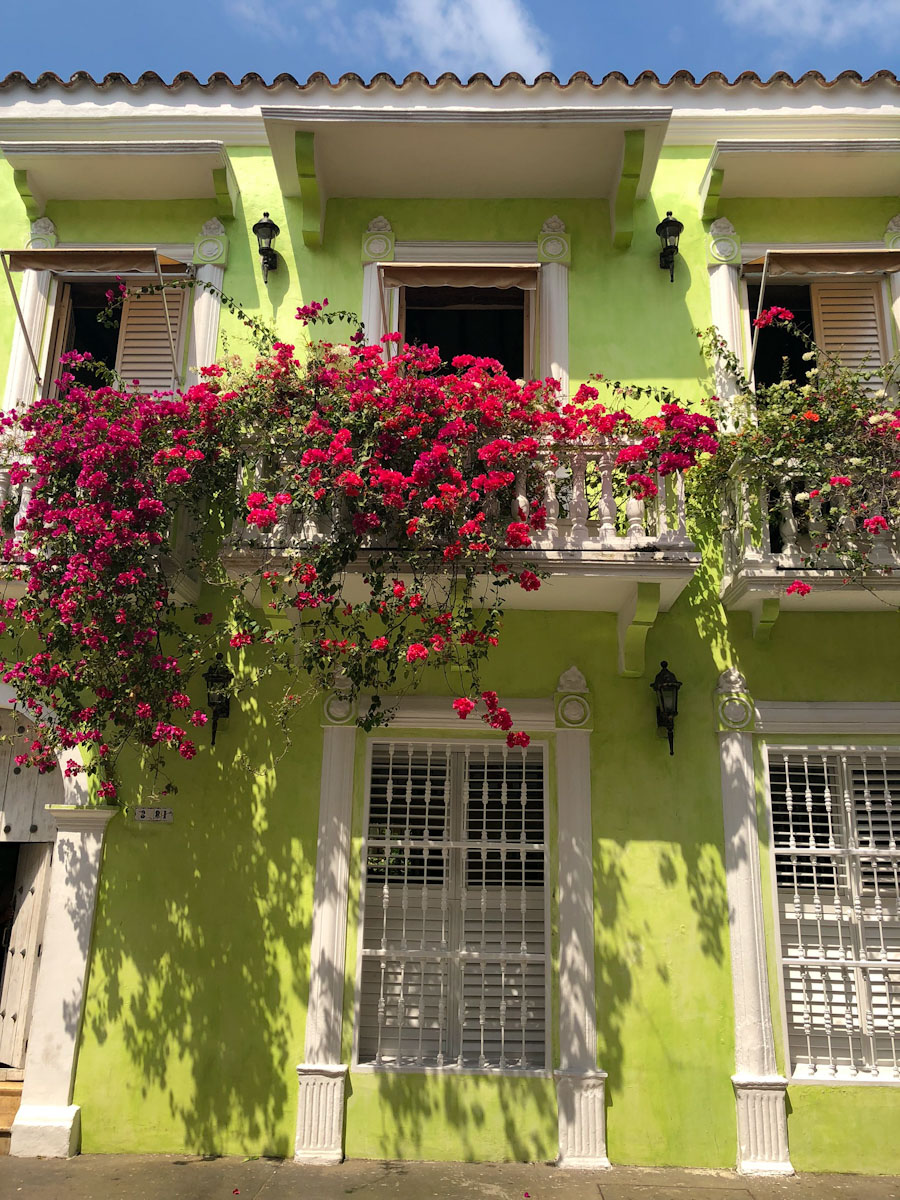 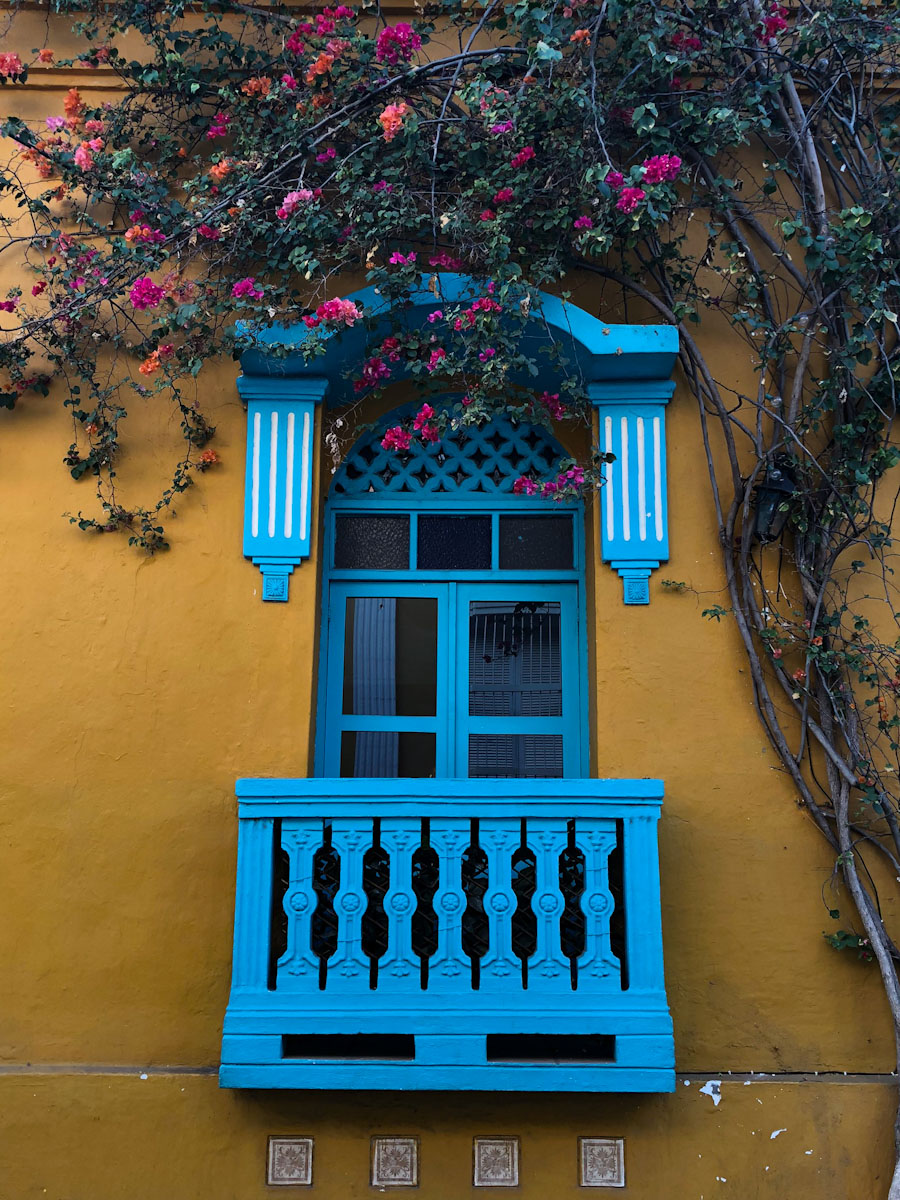 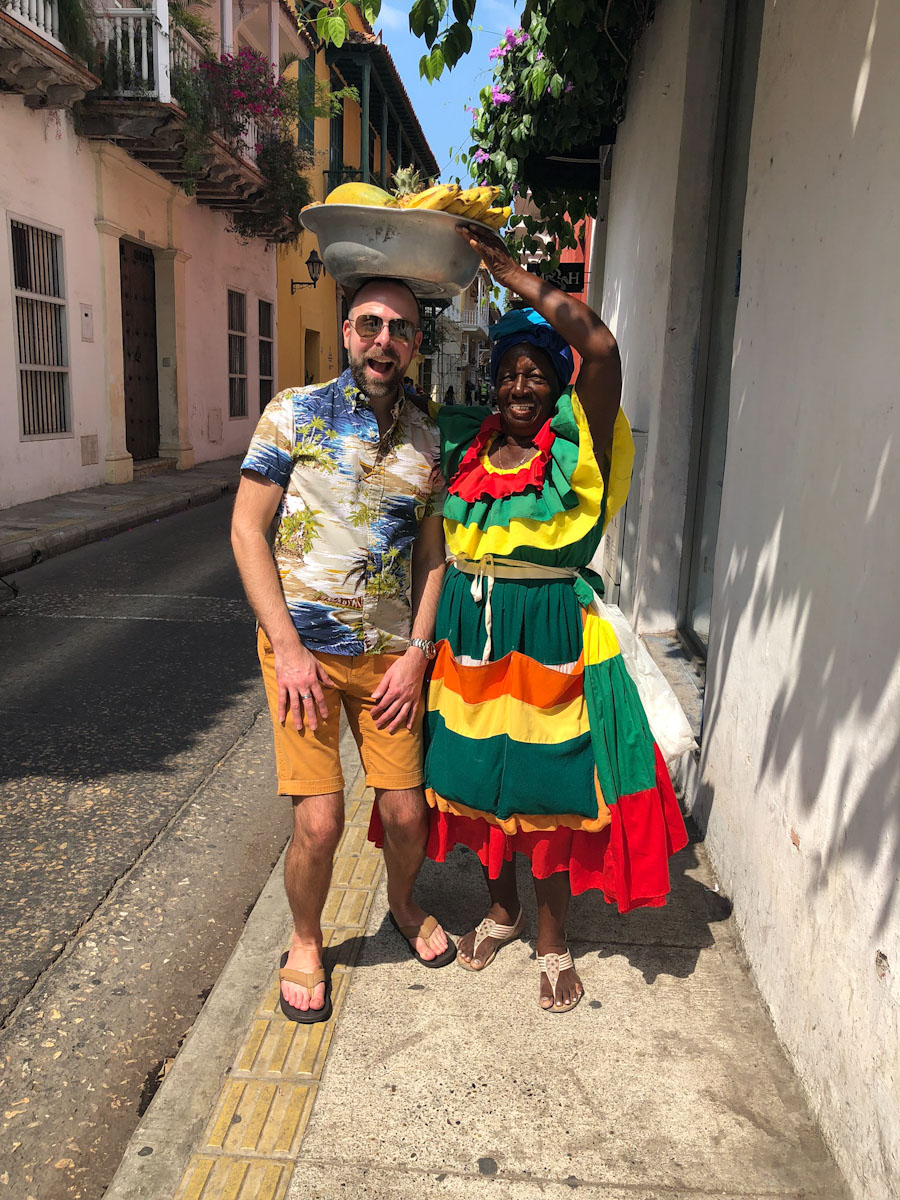 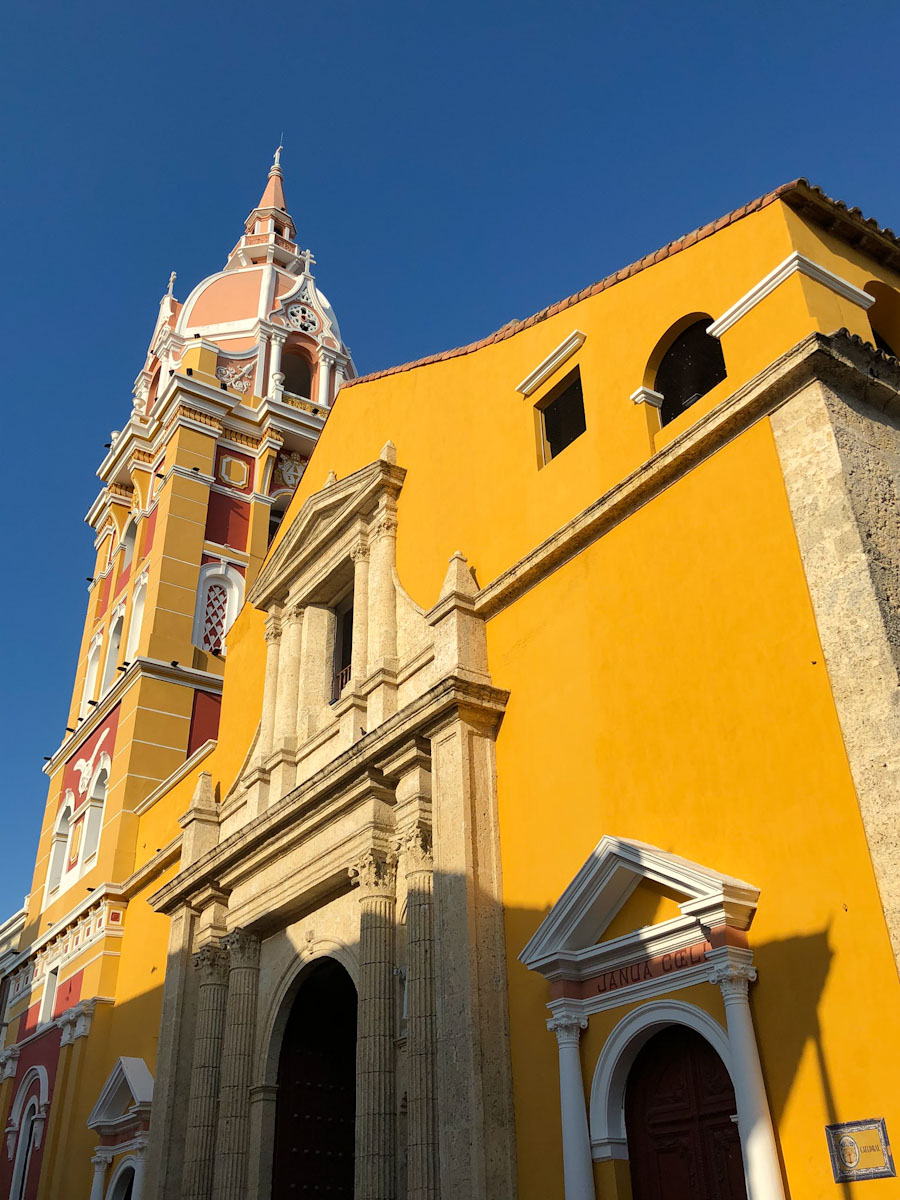 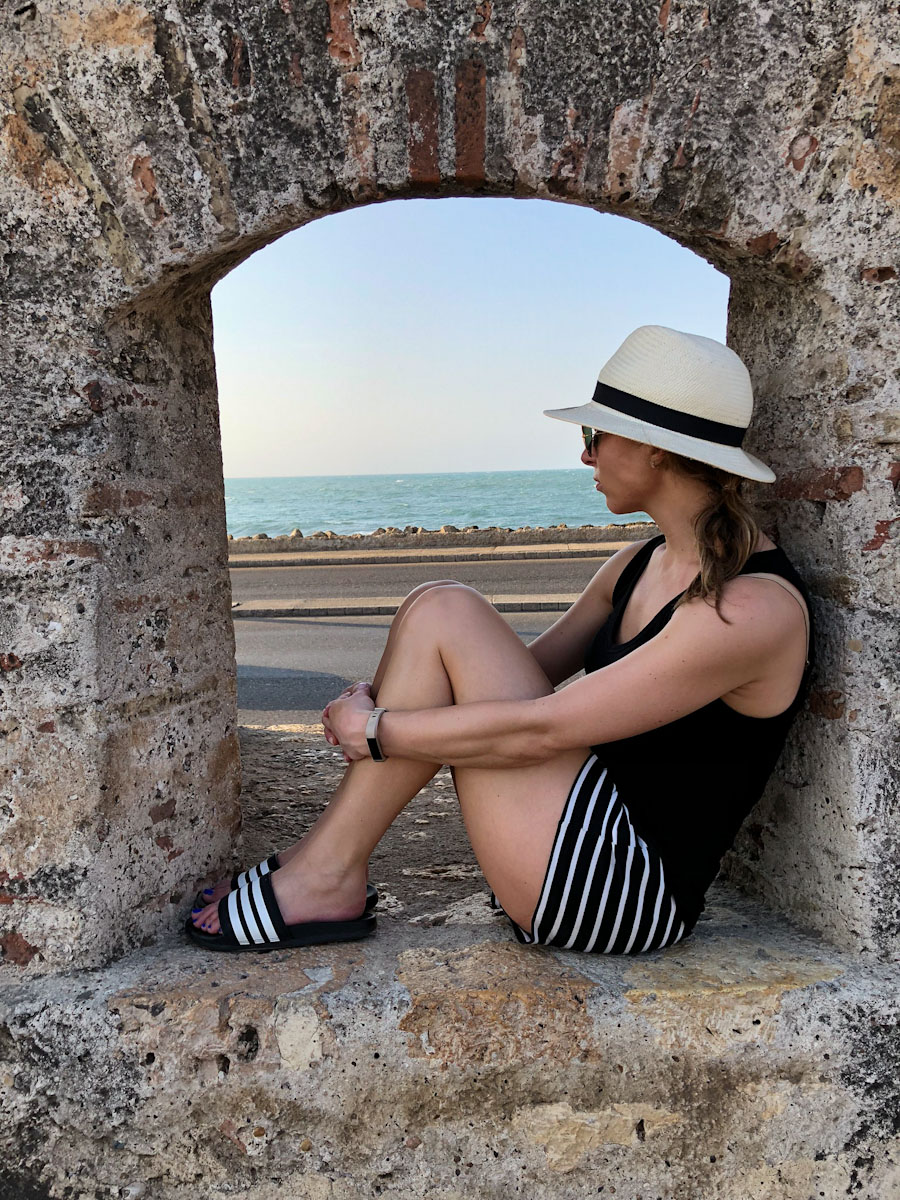 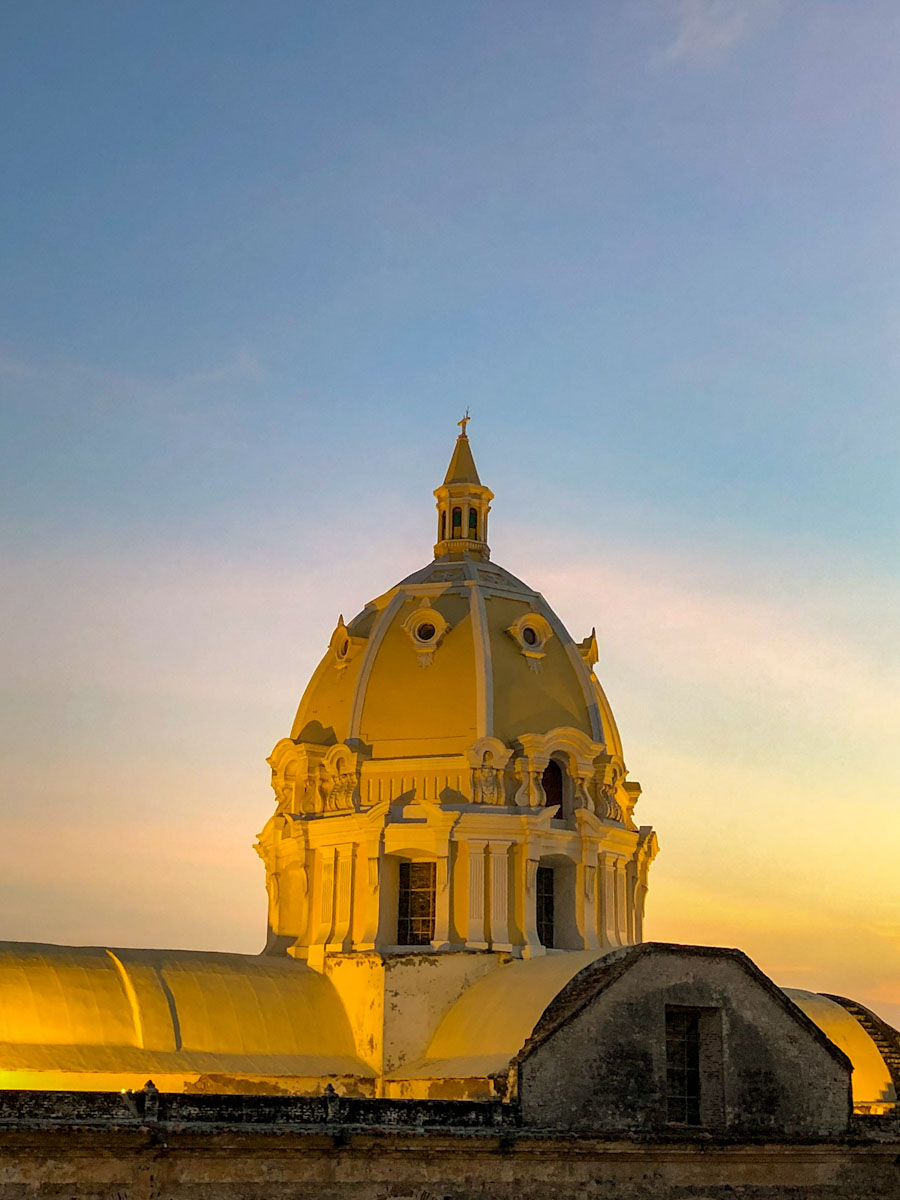 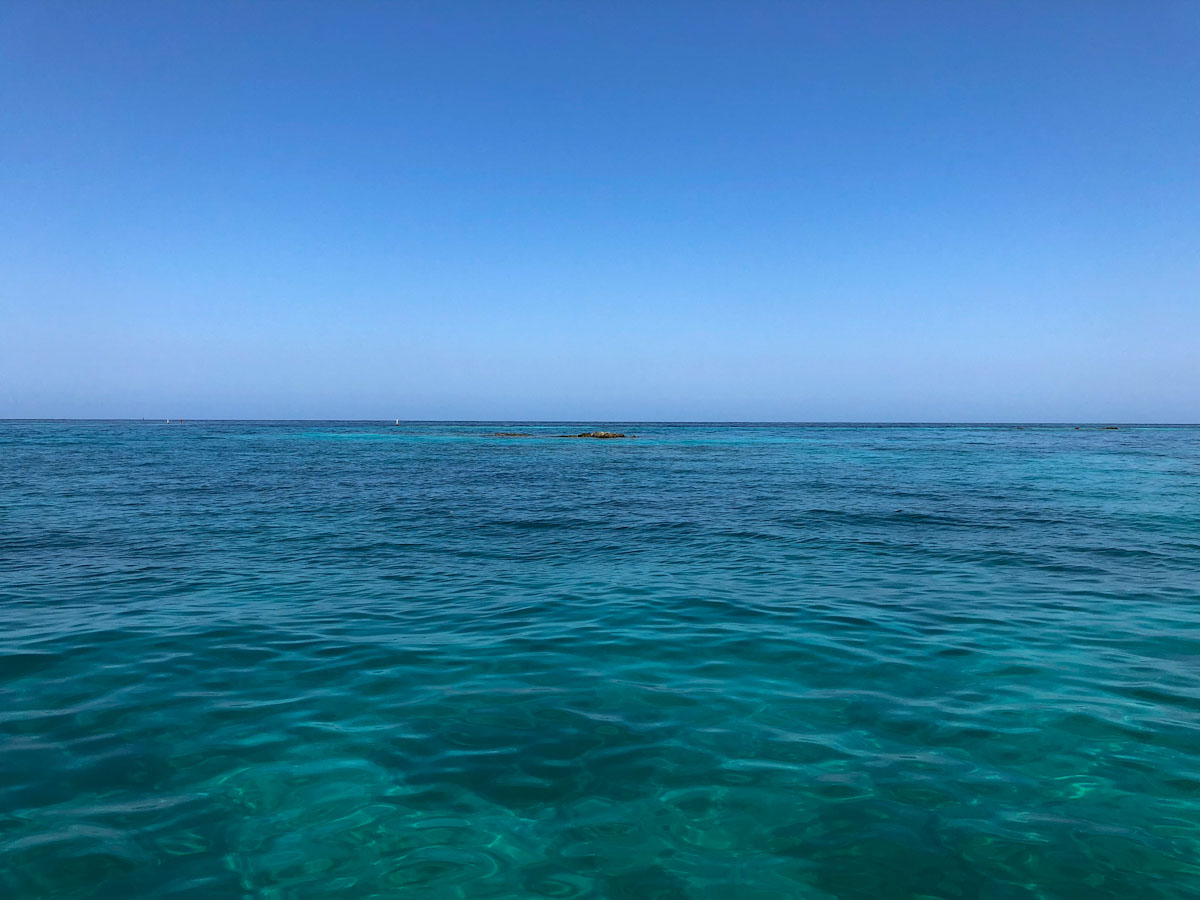 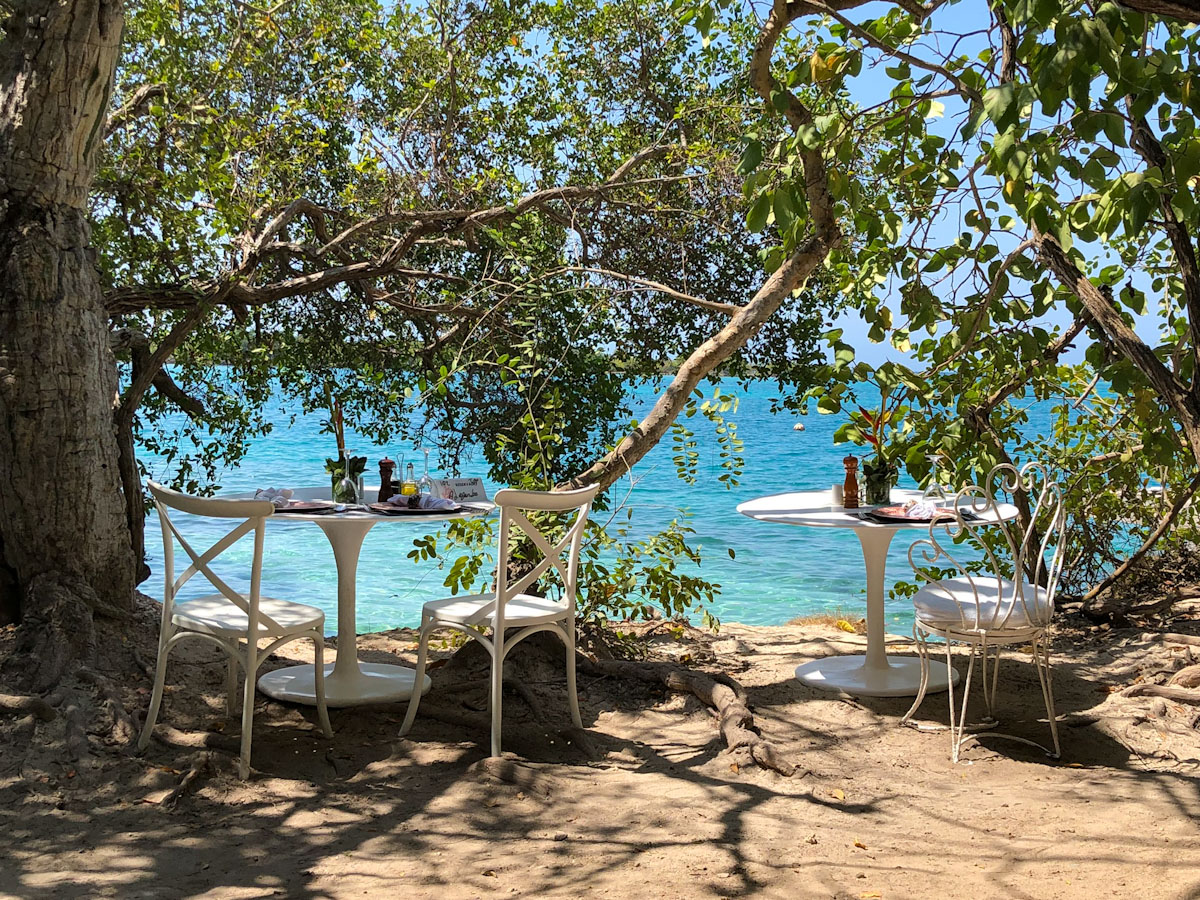 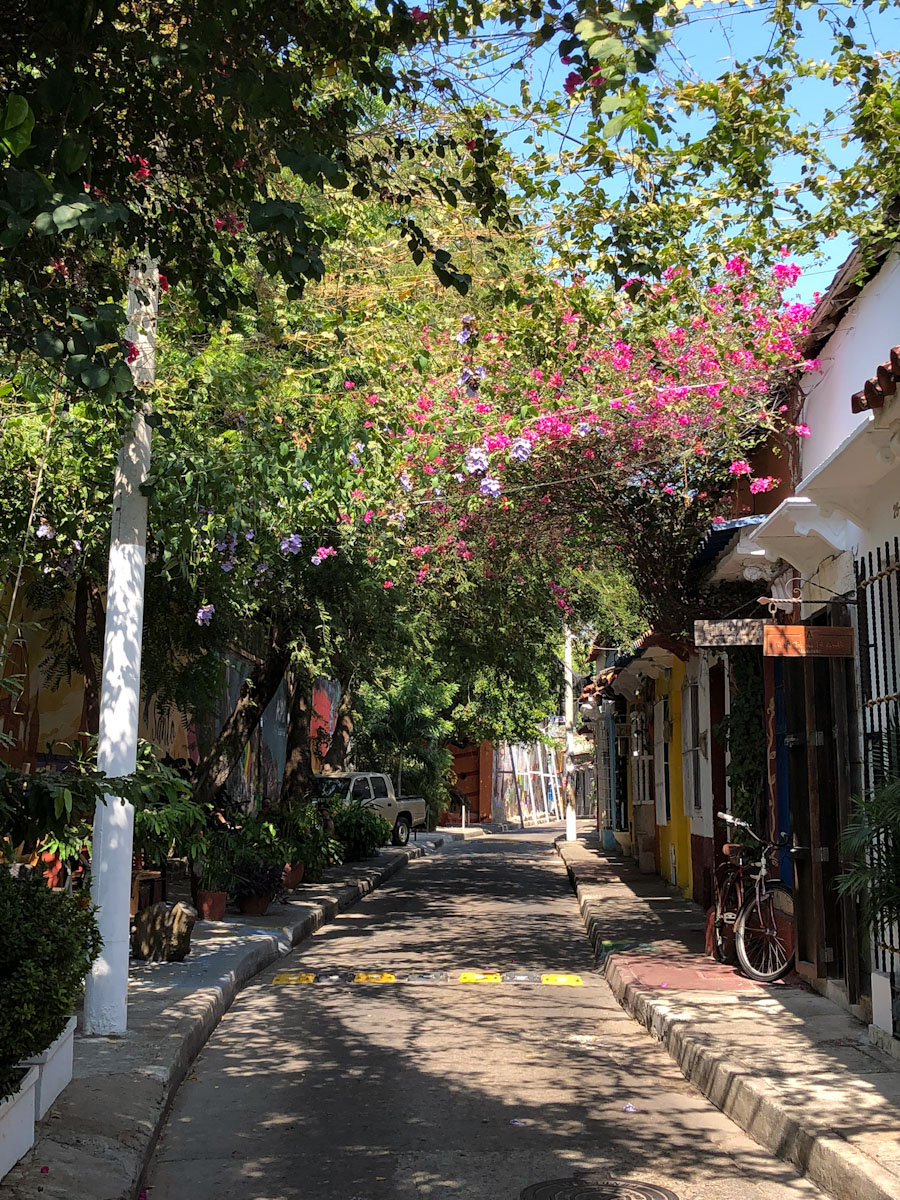 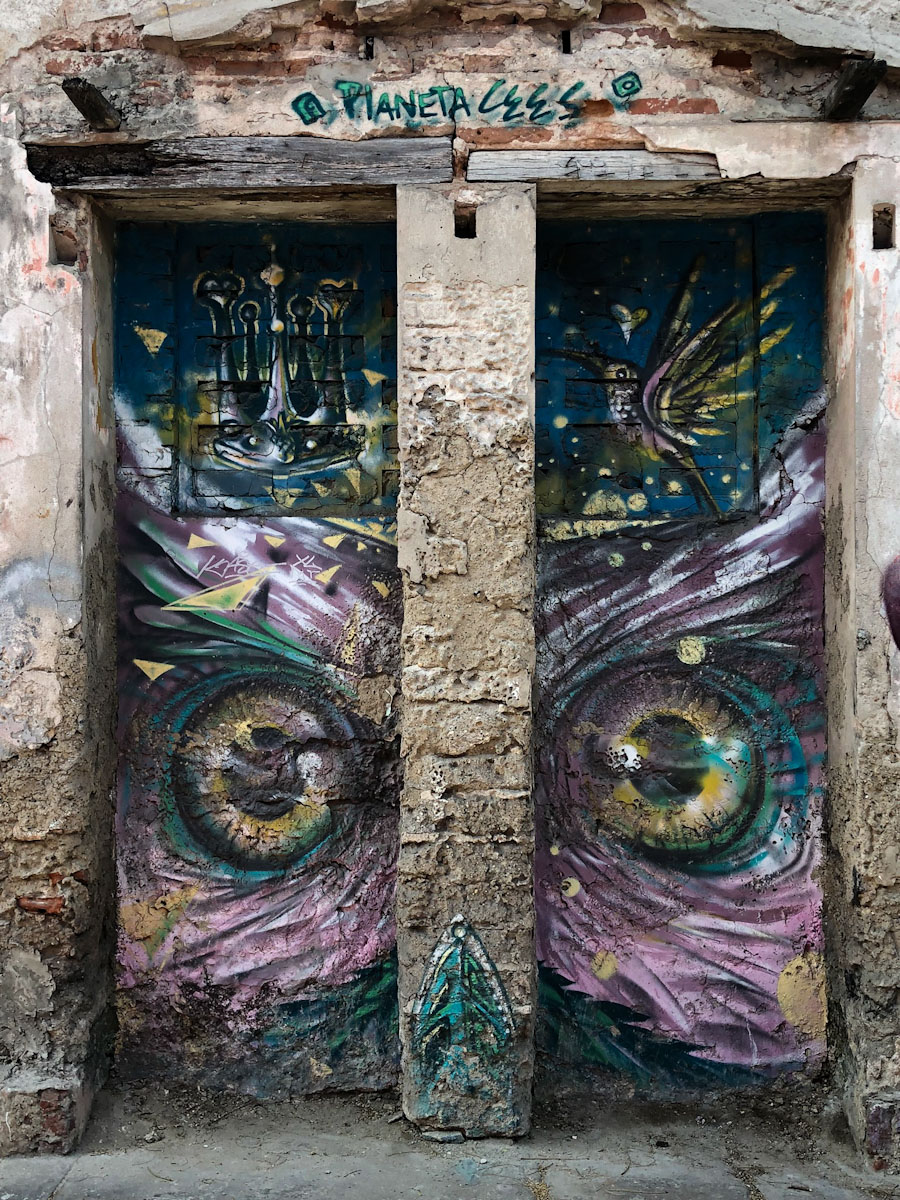 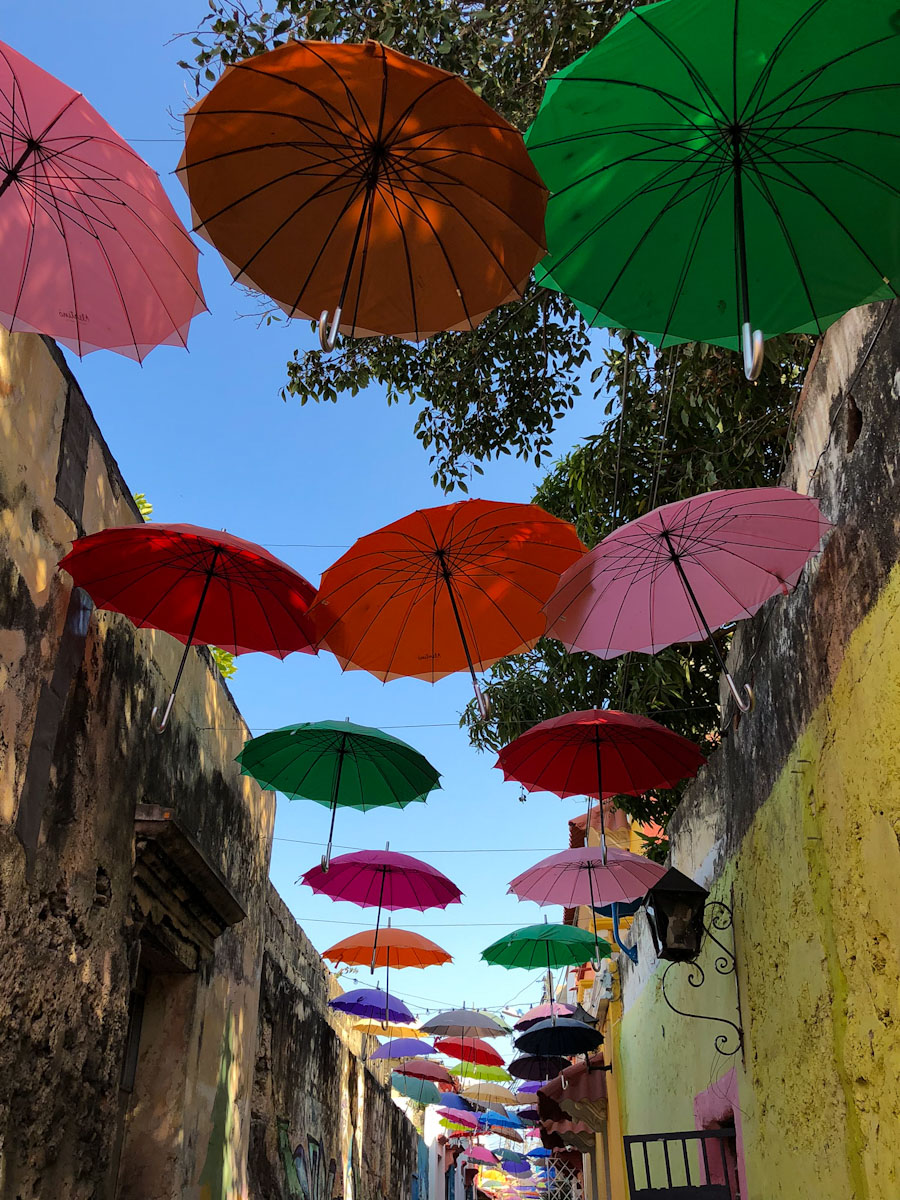 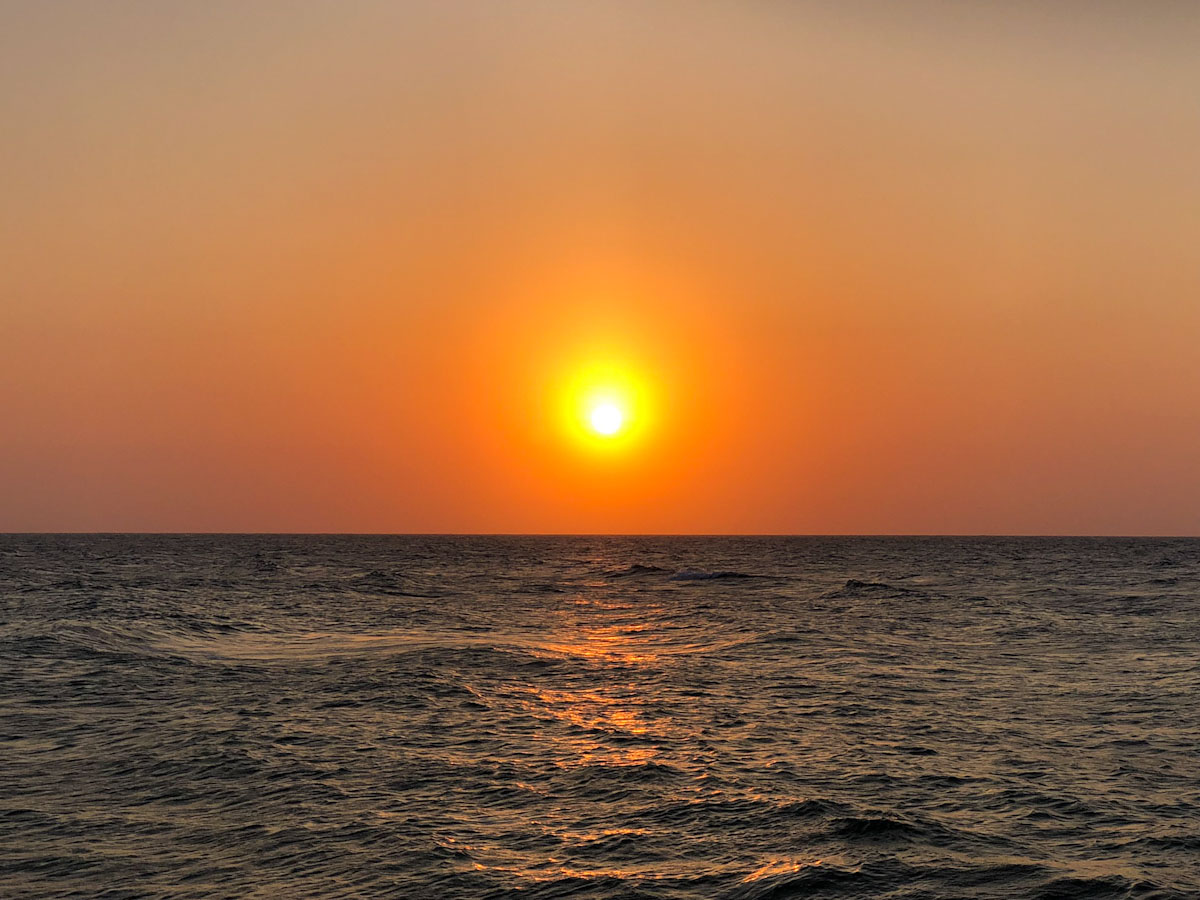