Bellinzona is the capital of Ticino, the only Italian-speaking canton of Switzerland. Located in a valley at the foot of the Alps, the city straddles the Fiume Ticino, which empties into nearby Lago Maggiore. Perched on hillsides surrounding the town are the three Castelli di Bellinzona, some of the best-preserved examples of medieval fortifications, which gained UNESCO World Heritage status in 2000.

Castelgrande, the oldest of the three, has been fortified since the late 1st century BC during the reign of Roman Emperor Augustus. After the collapse of the Western Roman Empire, control over Castelgrande and Bellinzona traded hands between the Ostrogoths, the Byzantines, the Longobards, and the Franks. Two centuries later, and back under Roman rule, the Holy Roman Emperor Otto III gifted Milan-controlled Bellinzona to the Bishop of Como in an effort to restore the power of ancient Rome.

At the end of the 13th century, the second castle, Montebello, was built by the Rusca family, a pro-imperial Ghibelline dynasty driven out of nearby Como. Five years after the castle’s completion, Milan besieged Bellinzona, and while the Rusca family was allowed to keep Montebello, Milan and the pro-papacy Guelphs dominated the rest of the city and surrounding valley.

During the reign of the Guelphs, a rampart known as the Murata was constructed across the entire valley of Ticino, which enabled Milan to protect and tax the trade routes of the surrounding mountain passes. Both Castelgrande and Montebello sat within the Murata. To fortify protection outside the Murata, Milan built Castello di Sasso Corbaro in the late 15th century, located high on a rocky hill overlooking Bellinzona and the valley below. Shortly after it’s construction, Milan was defeated by the French troops of Louis XII, who attempted to fortify Bellinzona but were driven out during a revolt by the citizens of the city. In 1500 Bellinzona joined the Swiss Confederation, and the rest is history.

Charles and I visited Bellinzona in September of 2018 during a trip to neighboring Lake Como. After lunch in nearby Locarno, Switzerland and a gondola ride up to Cardada, a 4,400-foot peak overlooking Lago Maggiore and the Ticino river basin, we took a quick detour to Bellinzona on our way back to Italy. The road leading into town was surprisingly industrial, lined with commercial centers and car dealerships. Eventually, we began to see signs for the Castelli di Bellinzona. It was the golden hour, and with only forty-five minutes of sunlight remaining, we decided to head to Castello di Sasso Corbaro, the highest of the three castles.

After a series of harrowing and steep hairpin turns, we reached the parking lot. The sun, which was about to make its exit behind the Lugano Prealps, cast the southwest-facing front of Sasso Corbaro aglow in amber-colored reflections while the back of the castle was eclipsed in shades of blue. Charles and I made our way toward the entrance courtyard. The defensive walls were constructed with swallowtail merlons, each cutout offering a bird’s-eye view of the world below. A soaring tower hovered over the southwest corner. An art exhibition was on display in the rooms of the castle, but we were more interested in climbing the tower to catch the sunset.

The top of the tower let out to a walkway on the inner perimeter of more merlon-topped defensive walls. The angled light of the soon-setting sun created spectacular shadows of the merlons against the honey-colored stone, which stood out brilliantly against the surrounding emerald hills and cerulean sky. Within moments, the light disappeared and the shadows dispersed. We returned to the car and slowly crept our way down the perilous switchbacks to the main road, yet again passing through the commercial zone—a scene quite antipodal to the three medieval castelli di Bellinzona. 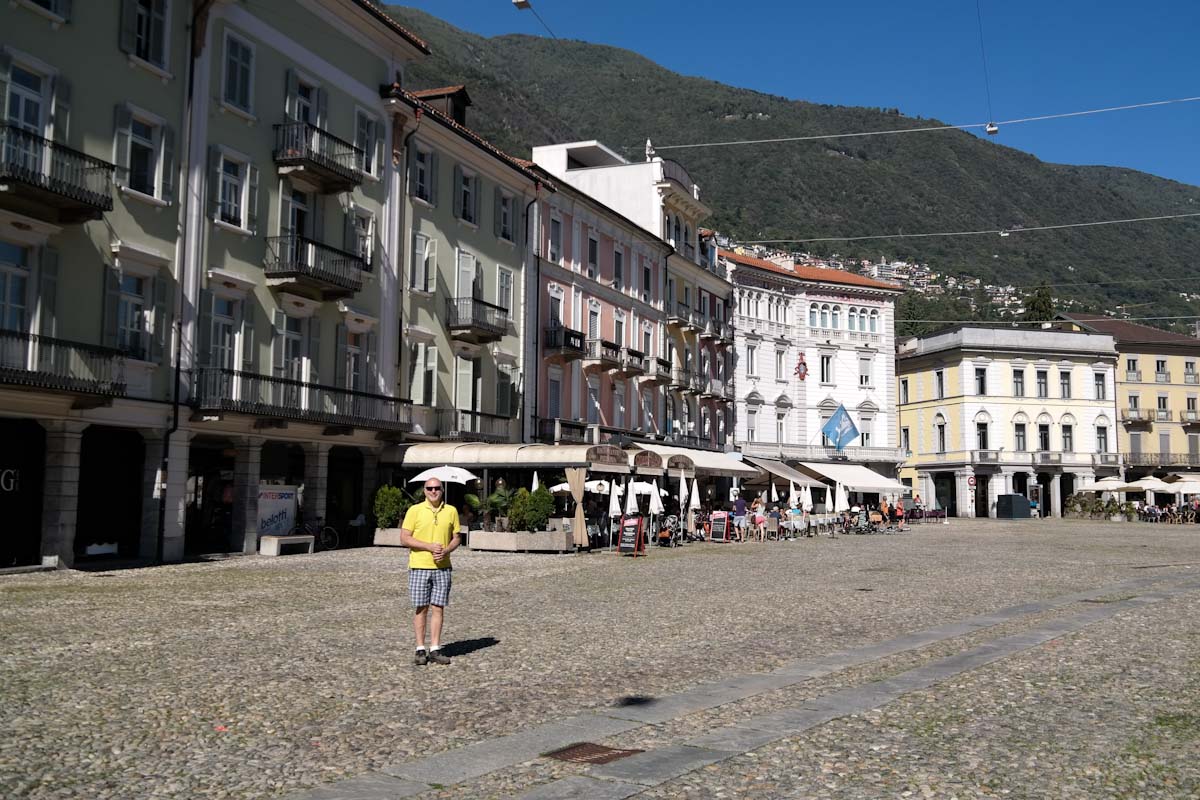 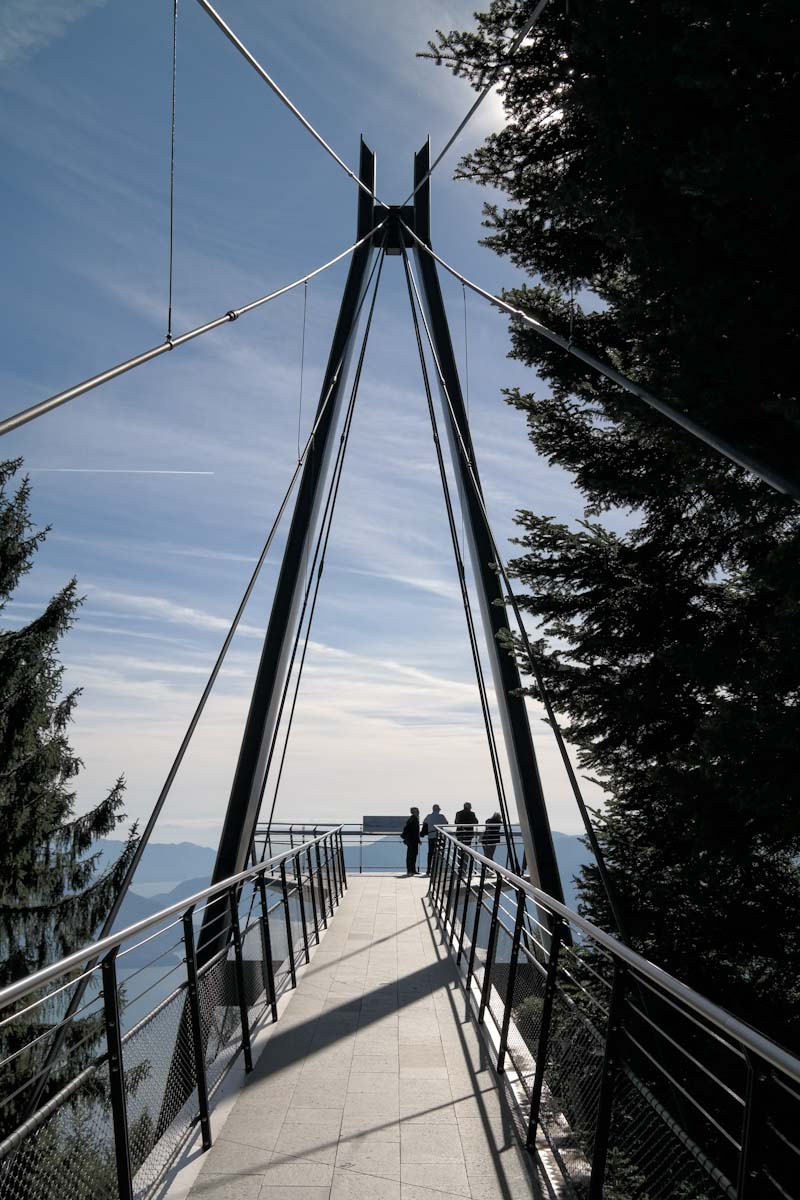 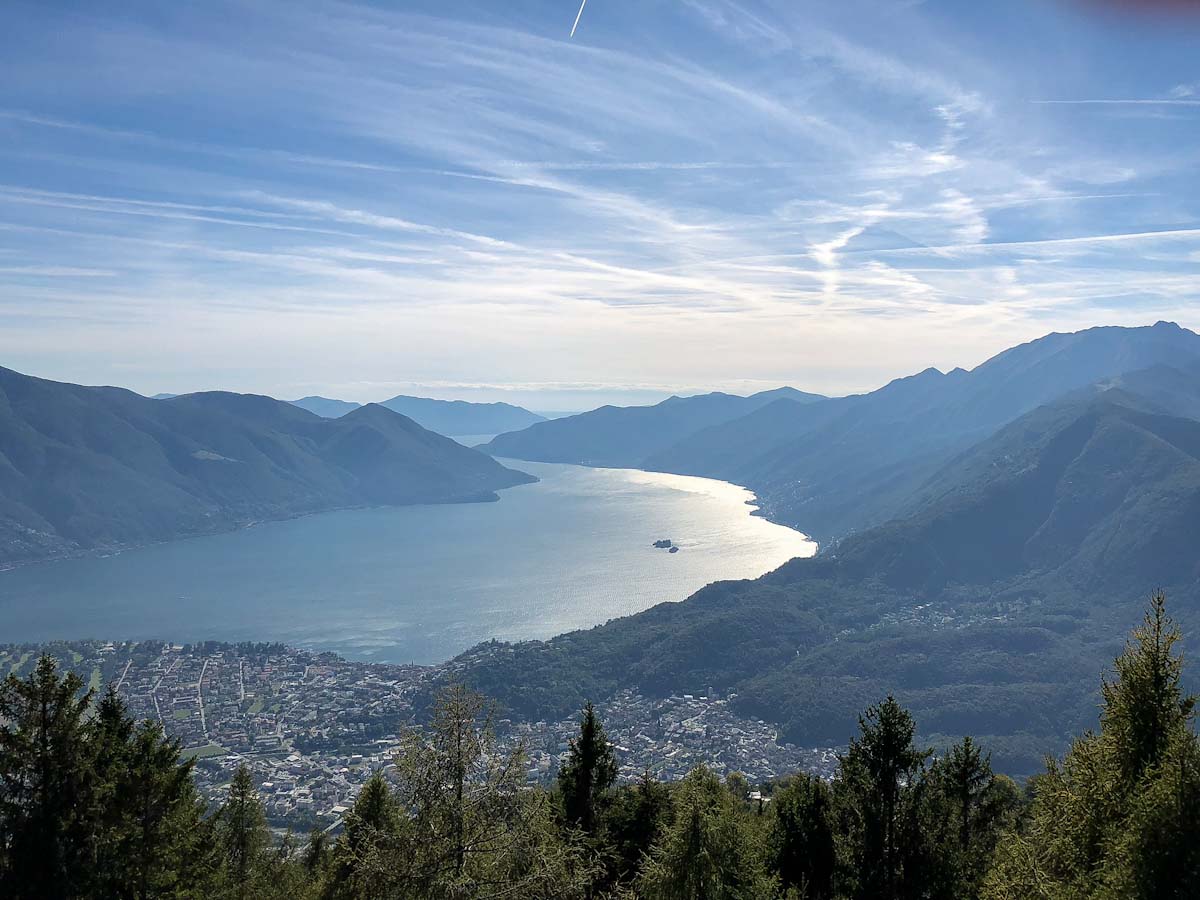 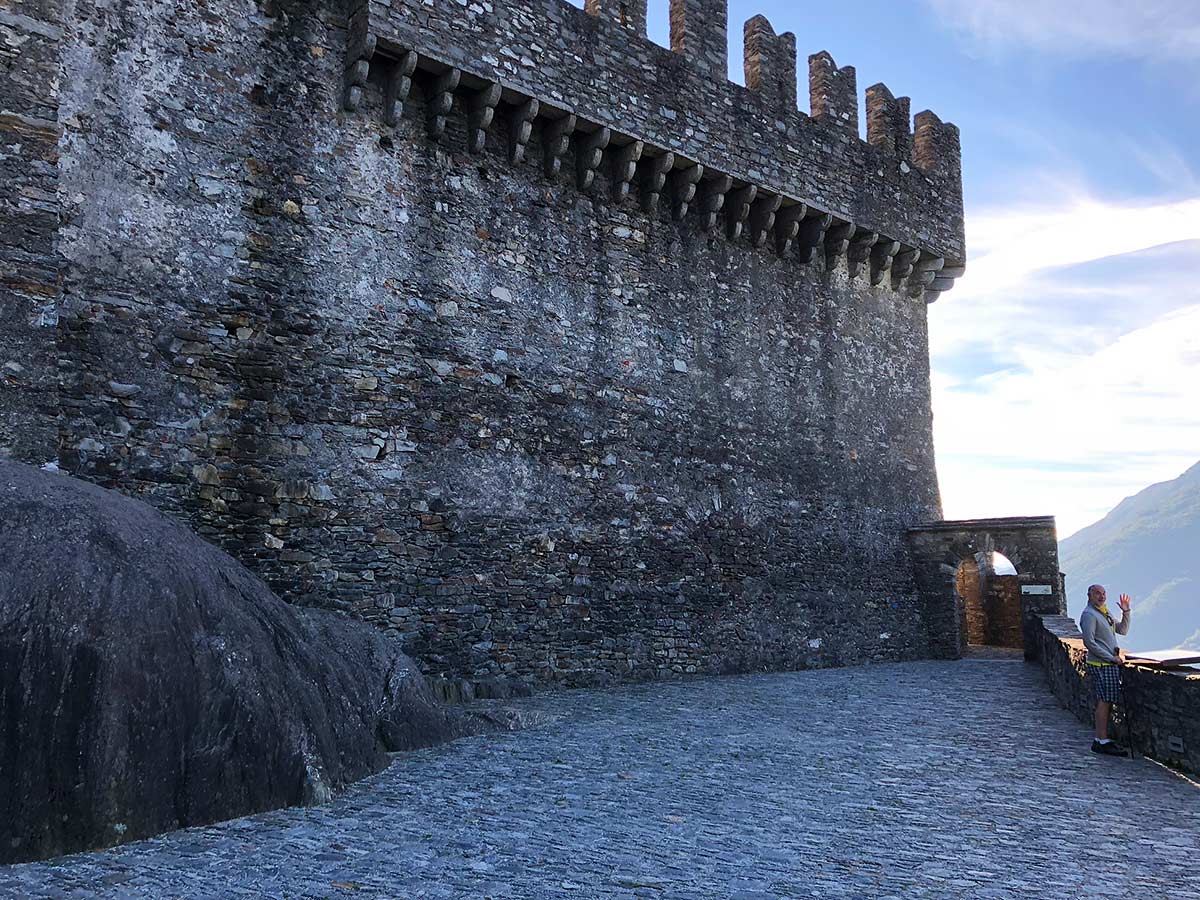 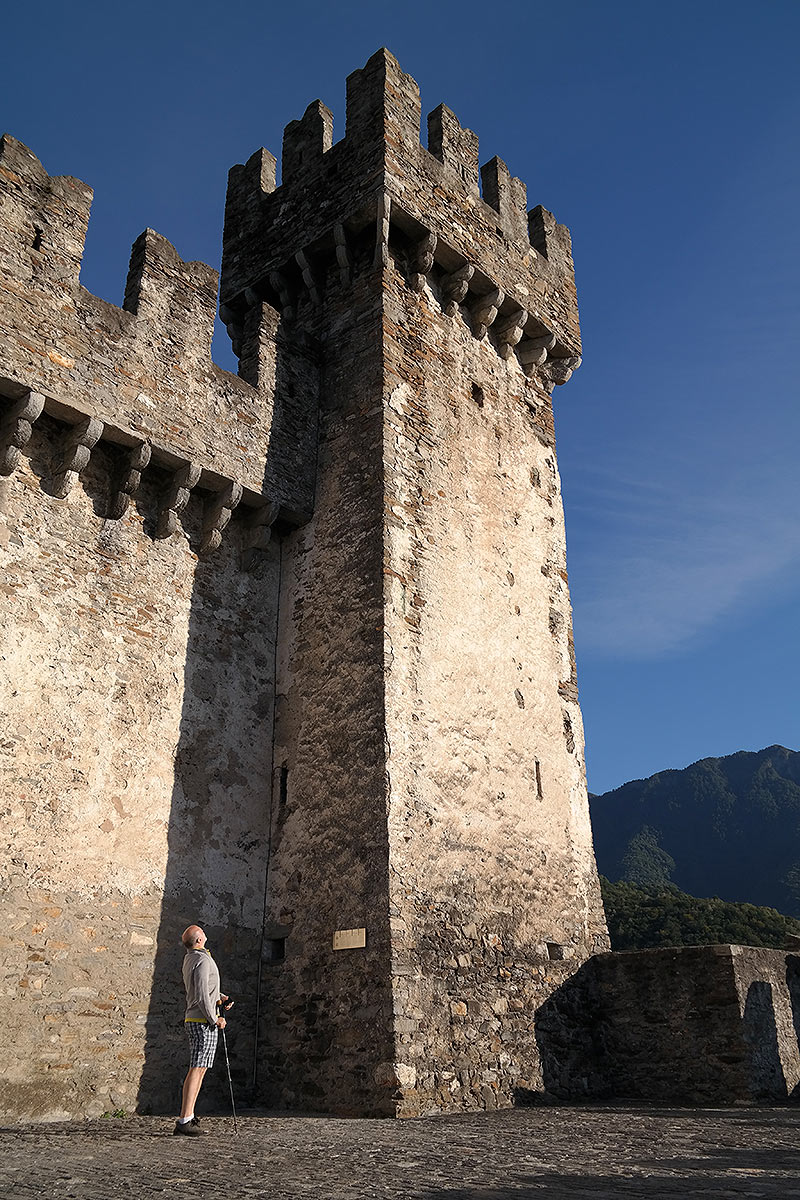 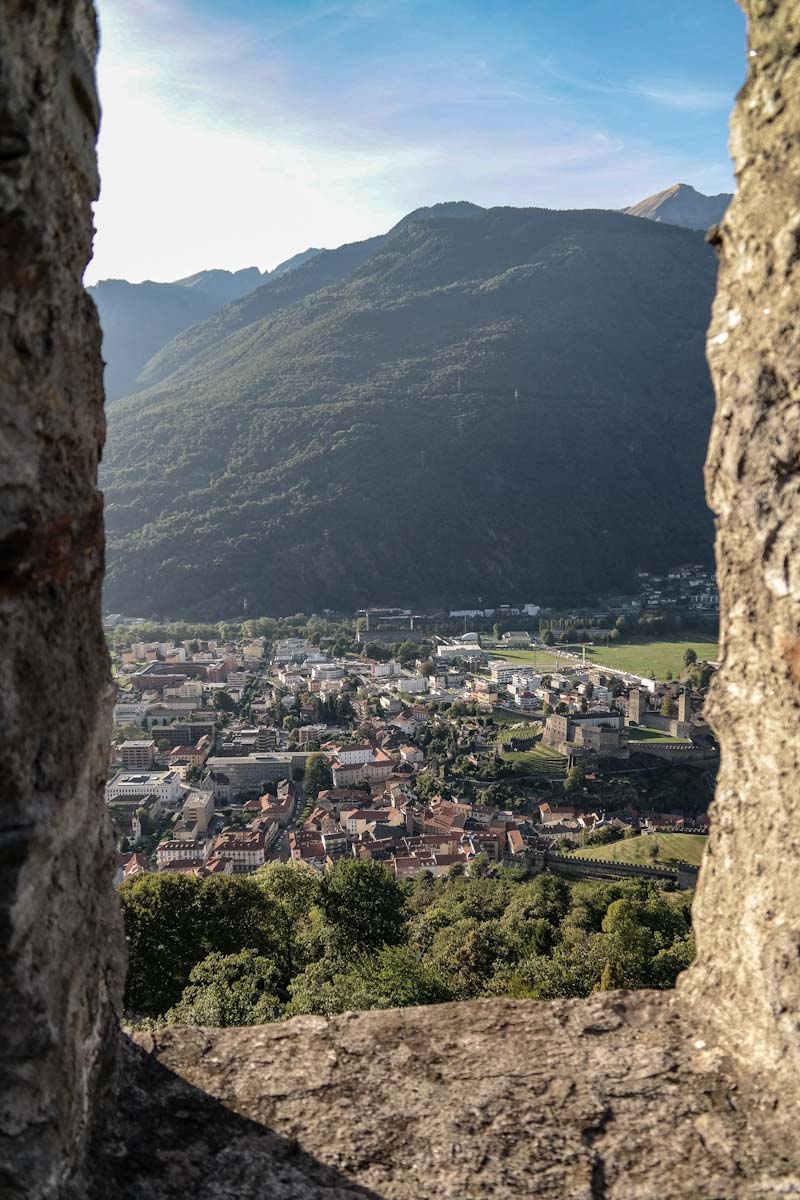 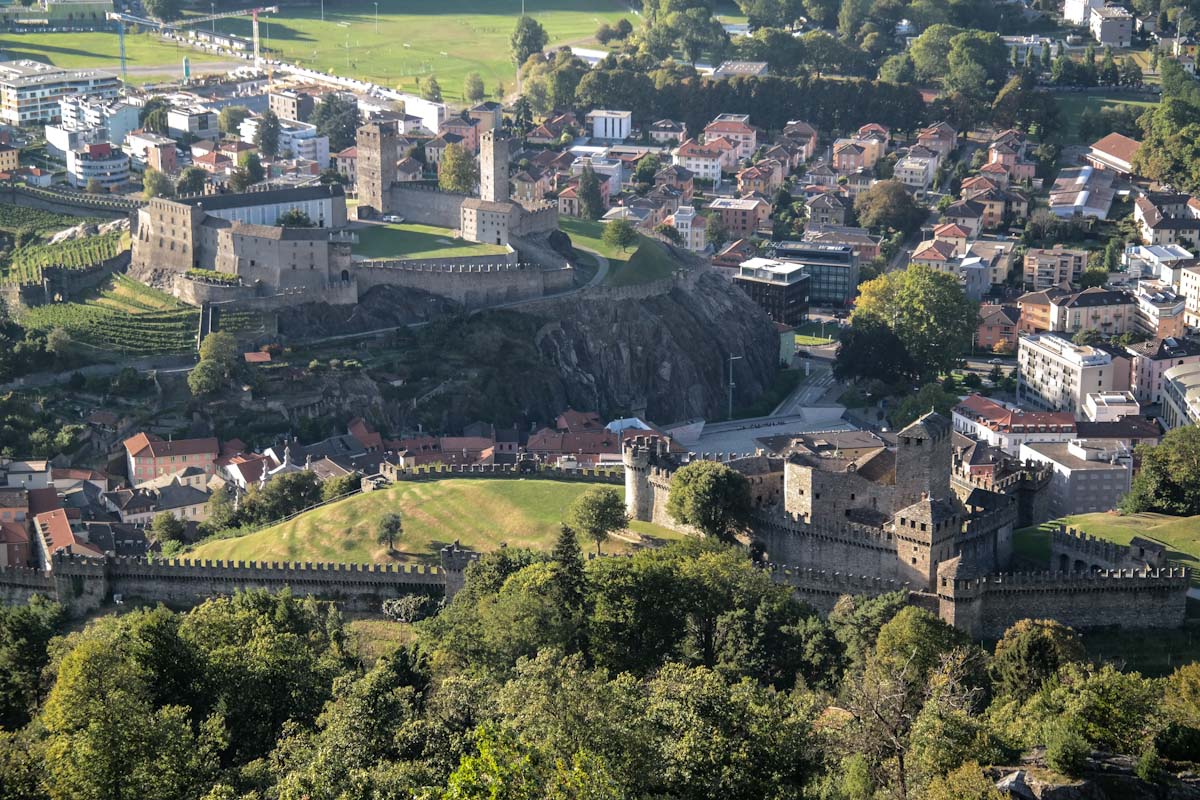 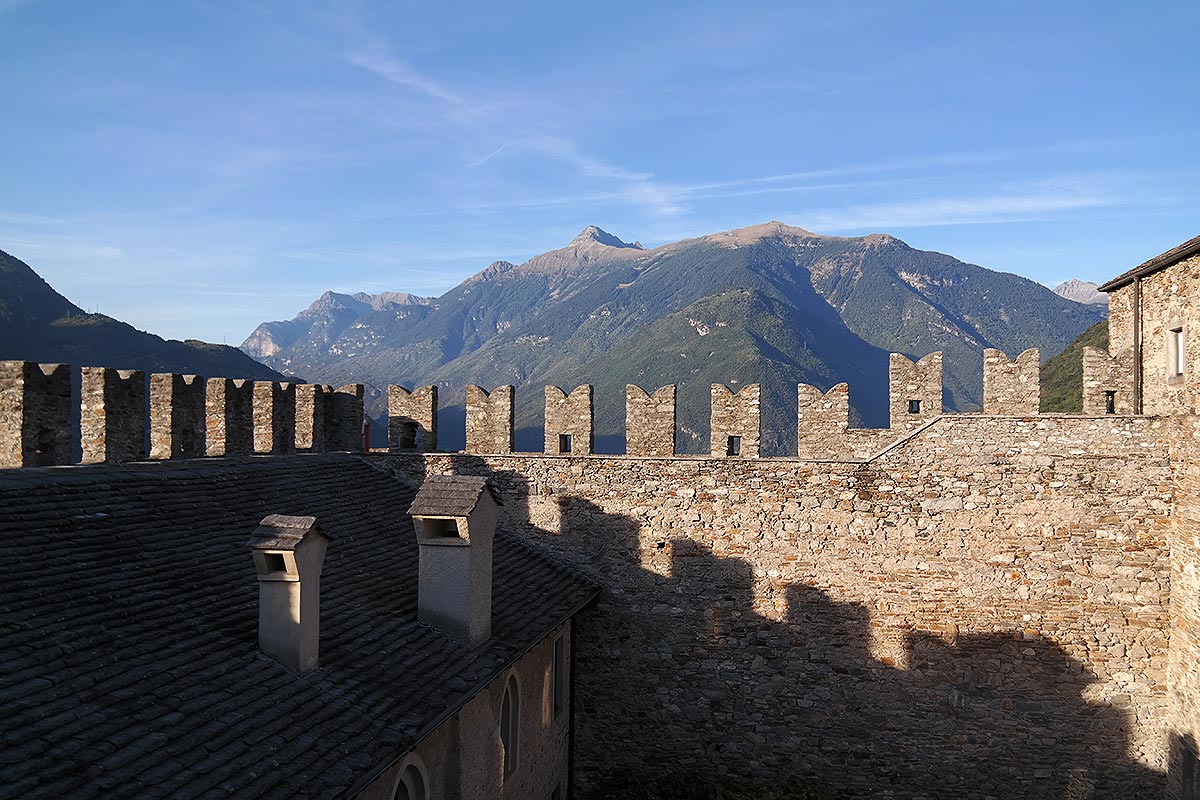 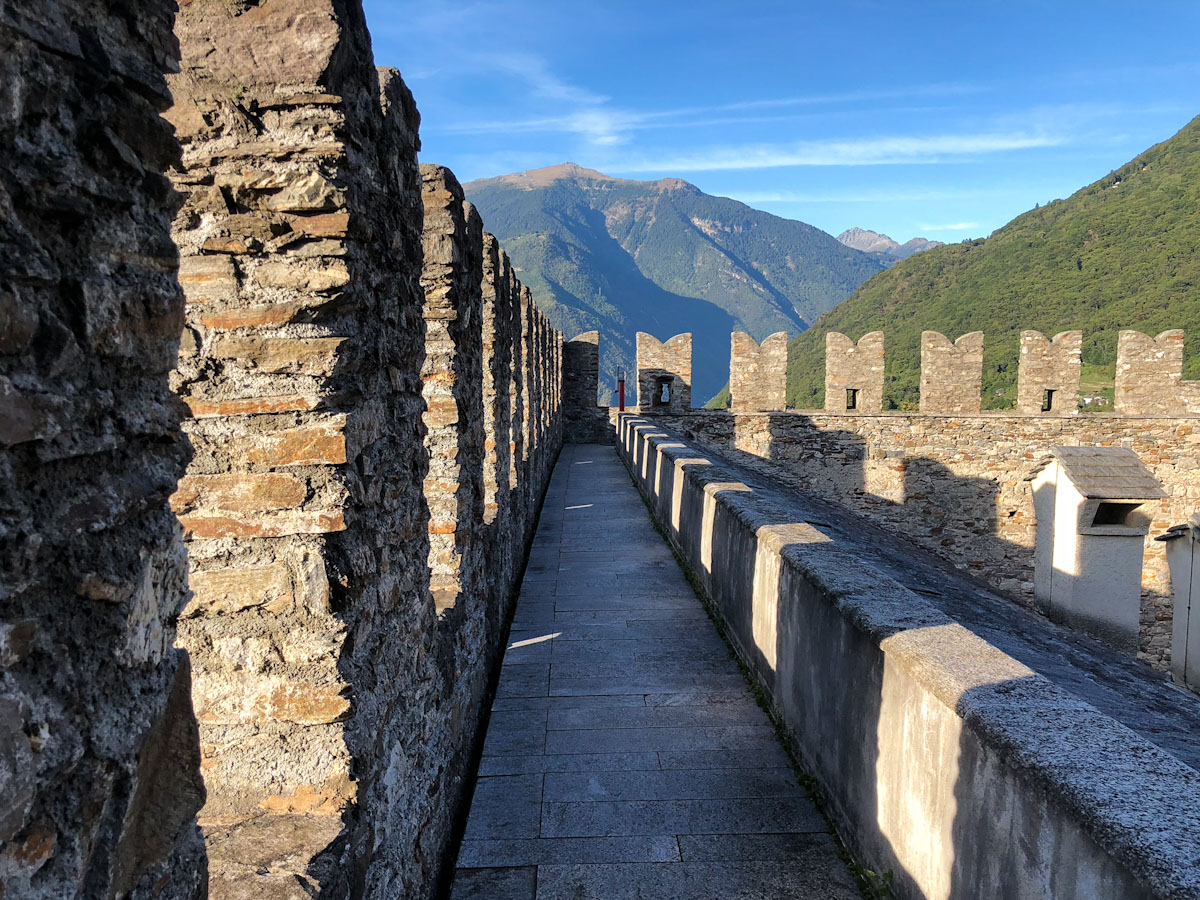 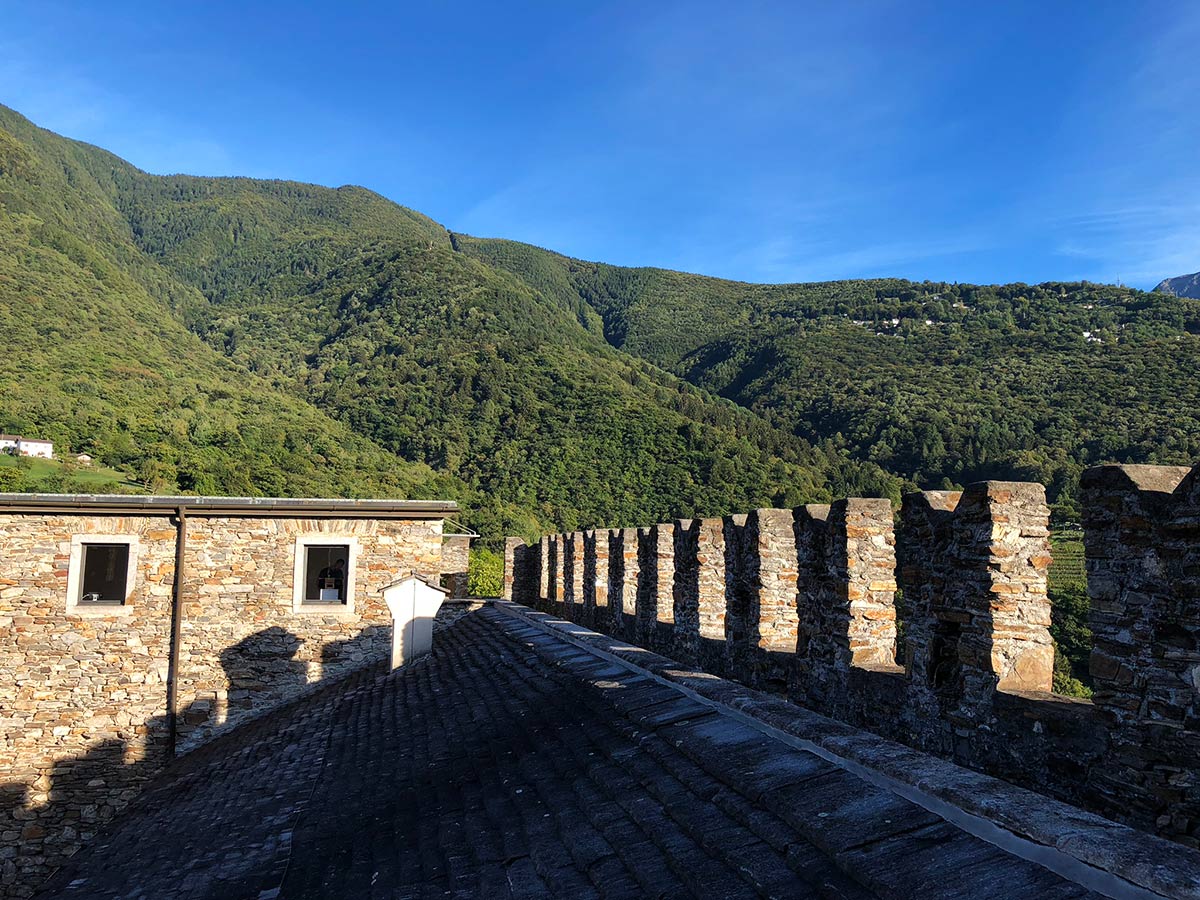 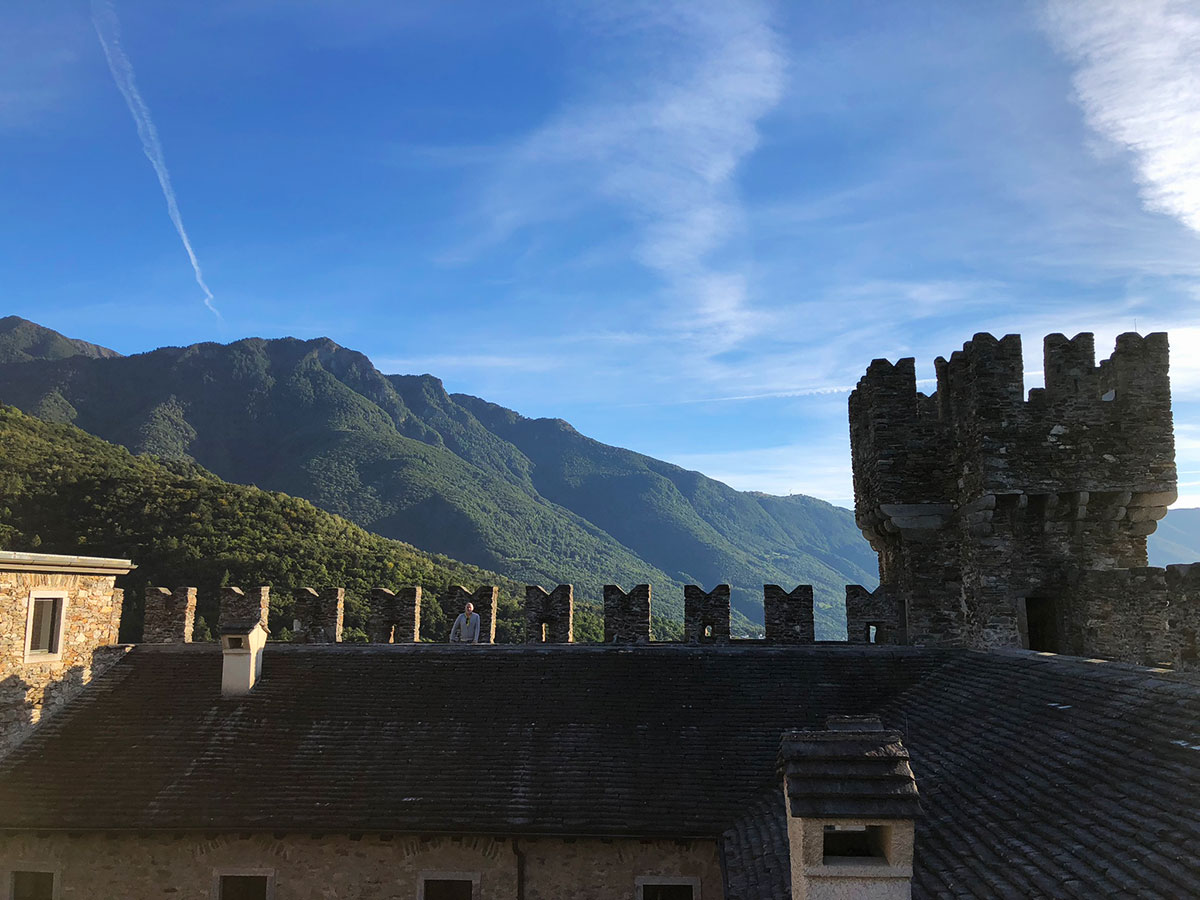